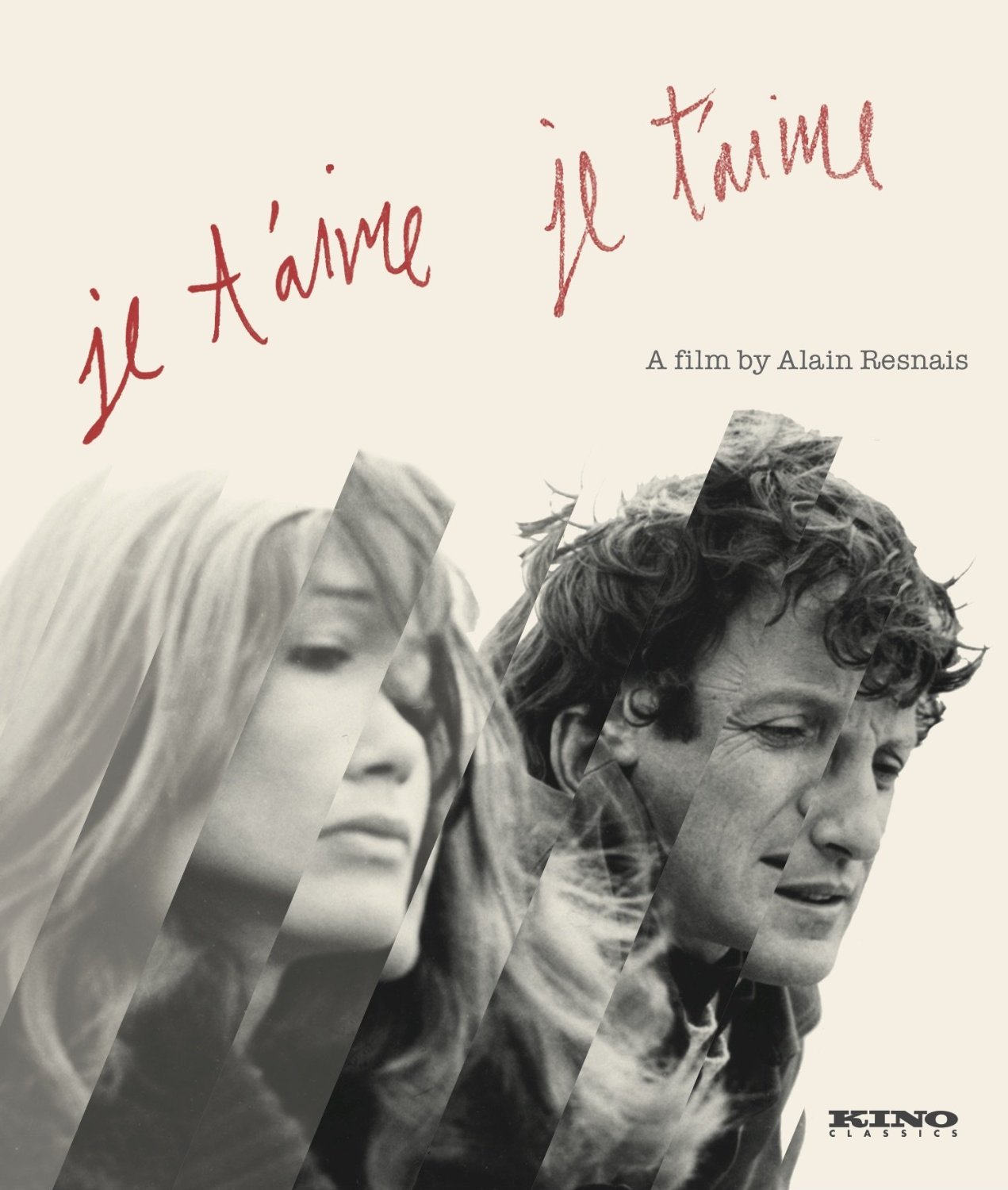 Alain Resnais’s ambiguous, despairing filmmaking is often regarded as an intellectual puzzle to be “worked out,” perhaps serving for some audiences as the closest that cinema has come to approximating the geometrically striking inscrutability of a Rubik’s Cube. Which is understandable, as there’s something intensely human in our wanting to assemble disparate, elusive elements into a comfortable whole, whether we’re processing art or messier corners of our lives. What can be lost in this dissection is the immediately bracing tactility of Resnais’s films, as well as their immersive vastness of feeling, as particularly expressed by their use of totemic objects. The structural columns in Last Year at Marienbad, for instance, are informed with perfectly surreal dimensions that speak to the film’s interest in privileged architecture as embodiment of existential despair. There are plenty of examples of this object- and setting-centric tangibility in Resnais’s oeuvre—most recently, the beautifully layered sets of Life of Riley, which figuratively physicalized the characters’ obsessions with their pasts.

A literal attempt to physicalize the past is the subject of the filmmaker’s early, often overlooked fantasy, Je T’aime, Je T’aime. The first act works as an unexpectedly traditional science-fiction story, considering that the authors are Resnais and novelist turned screenwriter Jacques Sternberg, both formalist radicals who’re often too ambitious to settle for ordinary linear narratives. In the opening, scientists are discussing the release of a hospital patient into their care for a secret experiment in time travel. We learn that the patient, Claude (Claude Rich), was treated for attempting suicide, implying that he has a comfort and acquaintanceship with demise that might accommodate such a dangerous mission. The scientists tell Claude that he’s to travel a year into the past, staying there for one minute before his return to the present, which is presumed to be able to transpire safely for the prior testing performed on poignantly tiny white lab mice. Does Claude remember where he was a year ago, the scientists inquire. Claude says he was on vacation.

The scientists lead Claude down into a cavern that suggests Edgar Allan Poe’s Cask of Amontillado as envisioned by Roger Vadim. Computers are strewn throughout the foreground of the makeshift laboratory. Near the background is the time machine, a fascinatingly irrational sculpture that, on its outside, purposefully suggests the giant pumpkin of Cinderella, though it also bears a resemblance to either an enlarged human brain or a dinner roll cast in plaster, with goofy-looking antennae sticking out of its top. The inside of the machine resembles a womb, with a fleshy bean bag that cradles Claude in its soft grip like a giant, benevolent hand. Drugs enable Claude’s time travel. Spacing out in this nurturing purgatory, he returns to the vacation he had a year ago with a girlfriend, Catrine (Olga Georges-Picot).

Je T’aime, Je T’aime is so vastly influential that contemporary audiences, first weaned on its aesthetic heirs, will likely take its innovations for granted. In their fascination with emotional tactility, Resnais and Sternberg casually pioneered a way in which the fantastic and the banal intermingle. The time machine is majestic, but also ridiculous: a huge awkward thing comically crammed in the back of a cave, suggesting the mundane logistical challenges of performing scientific magic.

Near the end of the film, when tragedy strikes, the scientists huddle back in their classroom to reduce everything back to soothing equations, and this great, catastrophic miracle they’ve witnessed is merely work to be bureaucratically processed. Intense pathos begets black comedy in a manner that would soon be of great use to a countless number of artists. The careers of David Cronenberg, Charlie Kaufman, and Michel Gondry, as we presently know them, are unthinkable without Je T’aime, Je T’aime. So are films as diverse in style and points of view as Jacob’s Ladder, Groundhog Day, Open Your Eyes, and Enter the Void, to name but a few. Even Kurt Vonnegut’s classic Slaughterhouse-Five, published a year after the film’s release, bears a resemblance to Resnais’s film, though that may be coincidence.

Like Billy Pilgrim, Claude becomes unstuck in time, in the tradition of heroes metaphorically obsessed with themselves and their lost opportunities. When Claude first returns to a year ago, he’s scuba diving in the middle of the ocean, the great gurgling of the water pointedly emphasized by the exacting sound mix, which suggests this soothing trance state as an extension of Claude’s reverie in the time machine (an image lifted by Spike Jonze decades later for the final scene in Being John Malkovich). The moment immediately establishes the instability of perspective and time. We often seem to be looking at Claude and out from within Claude at once—an impression that’s partially conveyed, as Jonathan Rosenbaum notes in the essay included with this disc, by Resnais’s decision to often position Claude dead center in the frame.

There’s always that aforementioned tactility. We feel as if we could walk toward the screen and enter that ocean. When Claude ascends the beach from the water, regarding gorgeous, aloof Catrine and her memorably sun-bronzed legs, we’re aware of those legs and of the incredible textures of the rocks on the bank as well as of the bristles of the bushes farther up along the landscape. The film quickly abandons pretenses of genre filmmaking, plunging into Resnais’s obsession with fractured temporal logic. Je T’aime, Je T’aime relates the story of Claude and Catrine’s disastrous relationship, and the entire story is there on screen, just not in order, offered to us instead as we might remember our own pasts: in fleeting, tortured, scrambled, irrational extremis triggered by random occurrences in our day. Seemingly insignificant moments, such as Claude leaving Catrine to fetch cigarettes or oranges, are circled until their full meanings arise. Or not.

The narrative is emotionally involving, staged with Resnais’s customary resistance to flatulent sentiment—often misconstrued as a “cold” sensibility when it actually represents a passion so great as to resist platitude. But the film’s soul truly emerges through its incredible editing syntax, which anticipates the formal grammar of mysteries such as Don’t Look Now and Mulholland Drive. Moments are layered in fashions that never entirely reveal themselves. Truth is allowed to be simultaneously plain and porous, subject to impenetrability—a conscious result of Resnais’s mixing of the otherworldly and the ordinary.

When a woman drives her car to meet Claude, we hear the gurgling of the ocean overtop the sequence, perhaps echoing the beginning of Claude’s dimensional freefall, perhaps not. We’re always aware of objects in settings, particularly the cluttered rooms where Claude and Catrine live and work, and of their evolving prominence. A pencil is a nonsense object until it isn’t. A painting is window dressing until it isn’t. Commenting on the particulars of Claude’s attempted suicide, the scientists remark that he doesn’t seem like a gun person to them. Later, that comment is uttered by someone else in a revealing, contrasting context.

The editing intentionally announces itself to the audience. One grows to dread each cut, as each is palpably felt, ripping Claude and the audience from one moment to the next. Echoes echo upon one another, leaving us with what? Reality as a state of mind, most damningly equated by this film to a mouse hopelessly attempting to breach its transparent cage, trying to access an outer realm that might reveal only more prisons.

The image has an attractive roughness to it, reflecting a careful refurbishing that refuses to overly “modernize” the film’s presentation. Colors are strikingly vibrant and hot, particularly blues, greens, and reds. Whites are bright without courting shrillness. Plenty of grain and richly detailed facial textures. Occasionally, the images scan as too soft, though it’s a minor issue. The soundtrack offers a dense wellspring of diegetic and non-diegetic effects, honoring the film’s Faulkner-esque interweaving of past and present. The score has an airy grace, while major recurring sounds (such as the movements of the sea) exude a rich, bass-y undertow.

The best supplement is “The Meeting of Alain Resnais and Jacques Sternberg,” which alternates interview footage of Sternberg in 2001 with footage of François Thomas, a Resnais scholar. Particularly of interest is Thomas’s discussion of the film’s editing, which notes that the flashback scenes are covered in one shot each, while the dream sequences often elide the protagonist entirely, in a holdover from Resnais’s original intention to represent the hero mostly through distanced first-person shots. The contemporary moments, meanwhile, are constructed out of more traditional editing rhythms. The point is that each “reality” is finely differentiated, yet also rendered ever-shifting and unreliable. Thomas also goes to great effort to cover Sternberg’s contributions to the film, noting how various scenes echo events in his short stories and novels. Resnais’s audio interview covers similar material, though it’s gratifying to hear the stories from the horse’s mouth, so to speak. Claude Rich describes Resnais’s way of providing a highly controlled environment that nevertheless afforded the actors’ great freedom, memorably noting humans to be made of “un-chronological feelings.” Totaling roughly 50 minutes, these features are a model of relaying a wealth of information within a compact, fat-free running time. Rounding out the package is the trailer and a characteristically astute and poetic essay by Jonathan Rosenbaum.