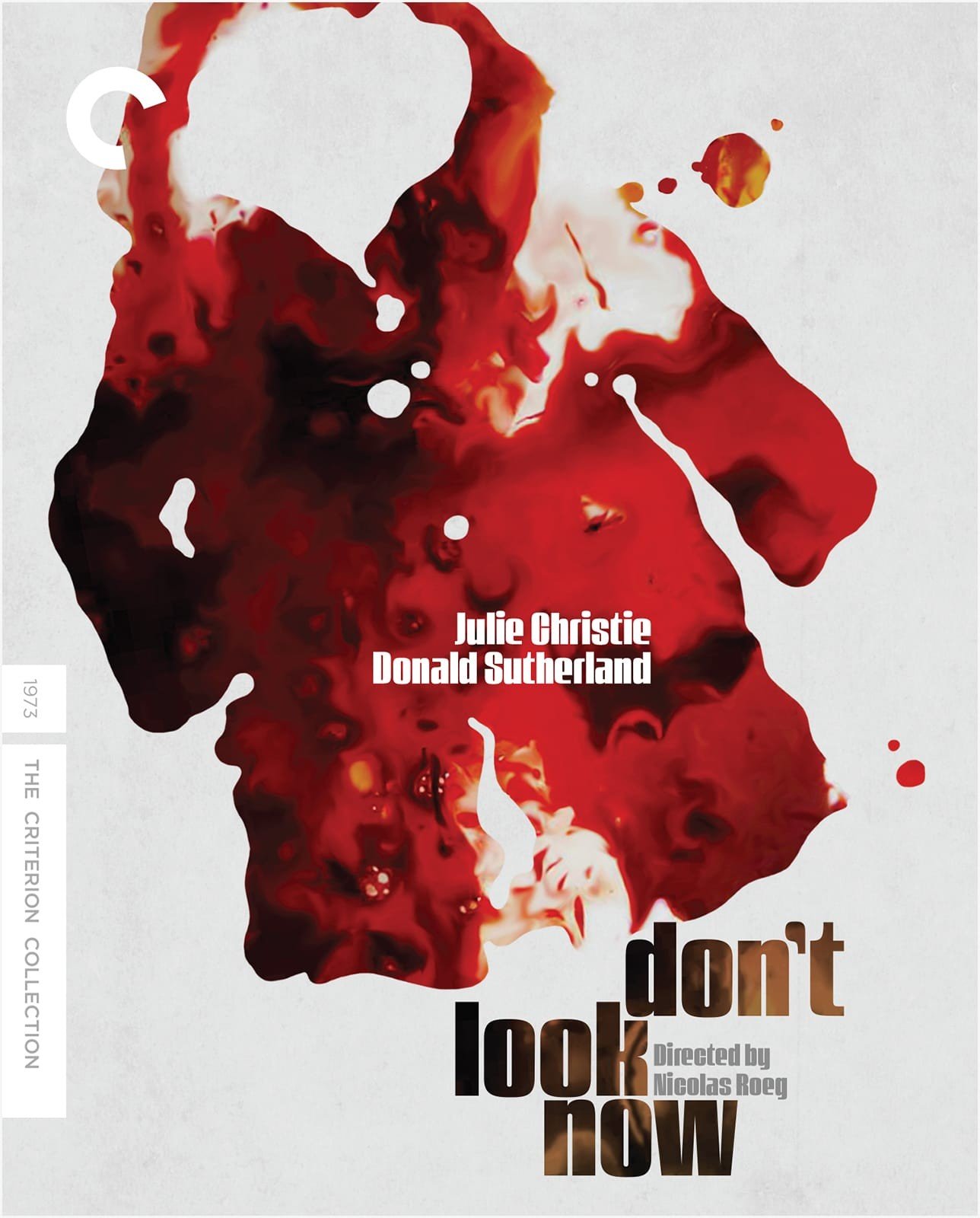 Nicolas Roeg’s Don’t Look Now is driven by a crushing sense of emotional desolation. The phrase “psychic thriller,” which was used to market the film, is technically true, but misleading, given that psychics are normally used by directors as springboards for action set pieces or as agents for ushering forth the explicit arrival of ghosts. There are certainly ghosts in Don’t Look Now, and maybe even the kind that populate traditional horror stories, but the prevailing specters here are those that people come to know through disappointment or tragedy as allusions to things lost or desired, which have a way of suddenly opening mental portals to the past, and, in the case of this film and quite a bit of supernatural fiction, the future. Don’t Look Now suggests a ghost story that Faulkner may have written, as it offers characters who’re at the mercy of their streams of consciousness. There’s barely a present tense here at all, as it’s swallowed up by what’s already happened and what will happen.

John and Laura Baxter (Donald Sutherland and Julie Christie) look into a river or a mirror, and they see the drowning of their daughter, Christine (Sharon Williams), in the pond at their home. They glance at a diminutive figure in a red raincoat, and they see Christine scurrying about in the coat she wore the day of her death. Temporarily living in Venice while John oversees the restoration of a church (a blunt and succinctly powerful symbol for John’s search for faith), the couple outwardly live their lives in a manner befitting the good-looking and prosperous. They go to dinner, take in the art, make love, and navigate the alleys and canals of Venice. John and Laura rarely—and this is integral to the film’s extraordinary power—make an outward show of their grief. They’re intelligent people, and they grasp, intellectually, the importance of moving on for their marriage, for their remaining son, and for the inaccessible interior portion of their respective lives.

Conditioned by a wealth of less imaginative and empathetic movies, one awaits the histrionics as a tension breaker. But the actors and Roeg understand grief as a great, often outwardly inexpressible ache that resembles an unending subliminal slideshow of what will never be. The moments that would naturally invite heartbroken fireworks, such as John’s discovery of Christine’s dead body, are pointedly cut short so as to deny us the catharsis that also eludes John and Laura. In the place of traditional exclamations of emotion, pivotal scenes are rendered in a slow-motion that metaphorically entombs them, casting them in a vague religiosity and showing them to be moments of great import that cannot be processed, no matter what intelligence John and Laura may possess.

Don’t Look Now is about death and grief as rifting confirmations that we’re destructible, finite, which logically informs life with an unmooring sense of fragility. That fragility is what the title is instructing us to evade for our own deceptive peace of mind, and what the justly celebrated editing, a feat of prismatic expressionism, is conveying. The symbols that Roeg and his editor, Graeme Clifford, juggle are often surprisingly hokey given the film’s formal sophistication. This film’s harbingers of doom are the stuff of old wives’ tales, such as the color red, broken glass, water, the sensation of falling, and so forth, but they’re layered and scrambled in a puzzle-box manner that renews them of their urgency. The editing (not only of image, but intricately of sound) is pointedly showy to the extent that even casual viewers will notice its contradictorily fluid yet jagged dexterity. It’s meant to be violating, because we’re supposed to feel as if we’re slightly apart from the story—an impression that’s compounded by the packed, claustrophobia-inducing rendering of Venice itself. The filmmakers forge an aura of hushed dread that’s nearly unrivaled in cinema, painting the city as a chicly knotted Escher madhouse of labyrinthine curves and potentially dangerous inhabitants.

Don’t Look Now is an intangibly jumpy, melancholic film that feels as if the bottom is always about to drop out of it. Not only brilliantly edited, it’s also one of the great illustrations of the relationship between editing and performance; the former provides a slightly rotted, debauched, intellectualized framework that the latter invests with heartbreakingly understated moments of tender, searching humanity. The oft-discussed love scene between John and Laura, for instance, is scrambled so that you alternately see their sex and its conclusion, in which they dress for dinner, at the same time. As director Steven Soderbergh has said, this juxtaposition conveys an intimacy between the lovers that might not be apparent in either singular scene. As passionate as this interlude is, particularly as heightened by Pino Donaggio’s rueful, hopeful score, this alternation suggests that even this high moment is but a gasp for the couple, an attempt to break from the subtly funereal cloud that has enveloped them.

The scene reaffirms the entire formal scheme of the film, which serves to dramatize the fact that John and Laura are forever cast away from sweet terra firma. Their lovemaking, which is both glamourous and unusually realistic in its understanding that people require actual physical friction to enjoy sex, is an unexpected but tragically brief reprieve from the great chaotic fugue that hounds them. When they’re done, they return to their vast loneliness. John and Laura still love each other greatly (the film would be less mature and easier to handle if they didn’t), but Christine’s ghost has come between them, and whether it’s figurative or literal is ultimately beside the point.

Image depth is extraordinary, which is particularly evident in the many sequences set along the canals and alleyways of Venice. Flesh tones are realistic and well-detailed, and colors, which are predominantly autumnal so as to emphasize the telling splashes of red, are suitably earthy and rich. There are occasional variations of clarity, but these are inherent in the film’s aesthetic. This image has been spruced up and cleared of pops and glitches, but it isn’t anachronistically pristine. The soundtrack faultlessly balances the film’s astonishingly dense mixing of diegetic and non-diegetic effects, fashioning a symphony of birds chirping, footsteps falling (which sound differently depending on their location), glass breaking, and water splashing that’s tied all together by Pino Donaggio’s rich, resonant score. Dialogue is clean, and there’s nothing in the way of aural hiccupping.

Several of these supplements have been culled from interviews that have appeared in other editions via prior sources such as Blue Underground, and, while engaging, they tend to echo one another. The “get” is the new conversation between Graeme Clifford and film writer and historian Bobbi O’Steen that refreshingly emphasizes the crucial role of the editor in quite literally shaping the film. Clifford discusses in detail the construction of all the major sequences, stressing the intricate sound effects as much as the layering of the images for bridging scenes together. Clifford also discusses the nature of his collaborations with directors Nicolas Roeg and Robert Altman. The second best supplement is the Q&A with Roeg from 2003 at London’s Ciné Lumière, in which he discloses his telling attitudes toward scripts, improvisation, and a host of other subjects. Conspicuously absent from this package is an audio commentary considering the density of this film’s formal construction, either from Roeg, Clifford, or Steven Soderbergh, who too-briefly appears in “Nicolas Roeg: The Enigma of Film,” to testify to the director’s influence on his own work. The trailer and an essay by critic David Thompson round out a good package that could use perhaps just a little more fresh meat.

One of the greatest and most devastating of all romantic mysteries arrives just in time for Valentine’s Day, by way of a typically robust and beautiful Criterion package.

Blu-ray Review: Jean Renoir’s A Day in the Country on the Criterion Collection

Review: Jean-Luc Godard’s Every Man for Himself on Criterion Blu-ray