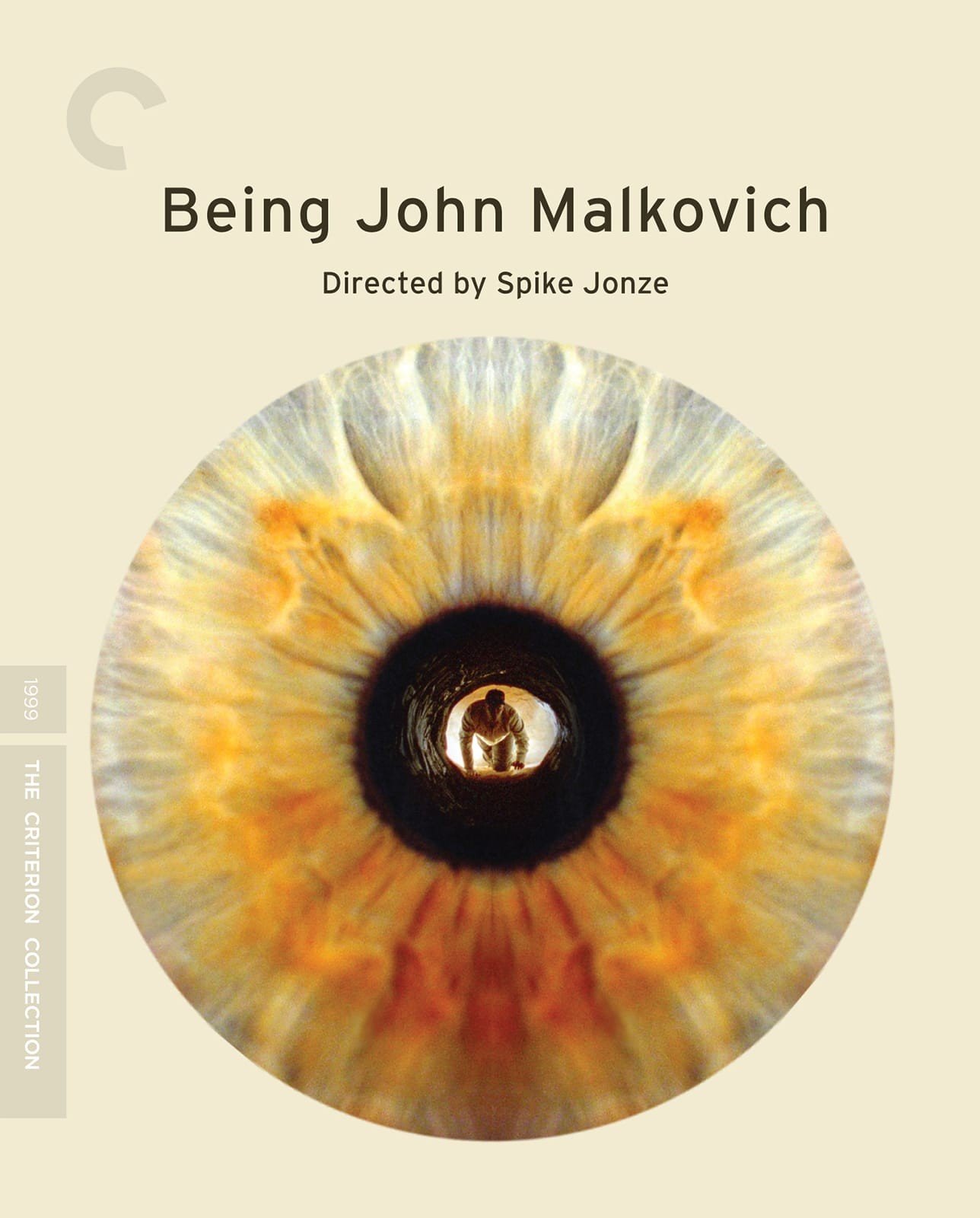 Released in theaters in the autumn of 1999, Being John Malkovich was one of a number of American films that opened that year—Election, Office Space, Fight Club, American Beauty, and The Matrix were others—that grappled with Generation X’s despairing understanding that little particularly distinguished it from generations past. Gen Xers were largely more privileged than their baby-boomer predecessors, yes, and that was maybe the problem, as members of Gen X were just comfortable enough to actively fear their mediocrity, whereas a poorer society would be content to eat and work regularly. The aforementioned films explored, satirized, or indulged the accompanying self-pity that came with the inescapable truth that most people, despite what their parents or advertising may have led them to believe, logically aren’t bound for greatness. Most people, even intelligent, capable people, wind up living perfectly agreeable everyday lives not unlike anyone else’s.

That fear of essential anonymity can drive certain people bananas, and no film has captured that feeling with more terrifying clarity than Being John Malkovich. At the time of its release, one could understandably read the film as an amusingly clever meta lark created by obviously talented men who were reveling in the unlikelihood of obtaining funding for a film with such an insane premise, and that’s partially true, and a number of particularly older critics wrote sentiments that boiled down to just that. But seen 13 years later, in an age that finds our society coexisting with an ever-mutating media organism that’s acknowledged to have nearly rendered Warhol’s widely quoted “15 minutes of fame” remark prescient, Being John Malkovich plays less as a comedy—though it’s often quite funny—and more as a melancholy satirical horror film that was several years ahead of its time.

Being John Malkovich has one the trickiest and subtlest structures to be found in any American movie from the 1990s. The film has a deceptive aura of shagginess: It appears to be comprised of a series of episodes of escalating wildness that were made up by director Spike Jonze and writer Charlie Kauffman as they went along in an effort to sew a variety of arbitrary creative oats. But every joke, even the most apparently random, expands upon the characters’ desperation to contend with feelings of social disconnection that are brought on by the kinds of everyday disappointments that everyone must contend with regularly.

Not every film affords a critic the opportunity to write the following paragraph. Craig Schwartz (John Cusack), a struggling puppeteer (read: tortured artist) imprisons his wife, Lotte (Cameron Diaz), in her pet chimpanzee’s cage in order to trick her lover, Maxine (Catherine Keener), into sleeping with him while he’s occupying the mind of actor John Malkovich (played by Malkovich himself in what must be the most notable cinematic display of good sportsmanship since Erich von Stroheim’s appearance in Sunset Boulevard). The chimpanzee, registering Lotte’s bondage and heartbreak, flashes back to his separation from his family in the jungle after he failed to help them evade capture. This sequence, which provides subtitles that inform us of the chimps’ thoughts, is clearly meant as a bit of absurdity, but it’s telling of the tone that Jonze and Kaufman sustain that this moment is also one of the most unexpectedly moving in the film. No one in this film, not even a diapered chimp randomly living in Craig and Lotte’s apartment, is immune to feelings of isolation, entrapment, and lingering regret.

And that includes an Oscar-nominated actor at least vaguely known by most everyone. One of the film’s best running jokes is that Malkovich’s life, though allowing for greater financial flexibility (which is, for many of us, a sizable difference), isn’t all that different from the lives of the other characters we meet. This film’s version of Malkovich appears to be bored and lonely; the most eventful evening we spend with him involves the ordering of expensive towels over the phone while picking over leftover Chinese food. The punchline is that the other characters would rather be anyone—probably even if the person in question wasn’t a celebrity, as fleeting escape of any kind is still escape or at least a periodic diversion. (Another sly, brilliant joke: Malkovich only fits the more traditional mold of the famous actor when he’s inhabited by other people who base their notion of an actor’s life, one presumes, on magazines and such.) And that suggestion eerily anticipates the numbing preponderance of reality TV shows that routinely invite audiences into the lives of people who’ve accomplished little apart from landing a spot on said reality TV show.

Unlike American Beauty and Fight Club, Jonze and Kaufman aren’t content to merely score glib points on entitled, piggy Americans who’ll do anything to evade taking responsibility for their own lives. It’s reasonable to assume that Kaufman, particularly when one takes into account the films that he wrote afterward, is working from a personal place; these characters’ fears appear, to an extent, to reflect his own, even though he’s also at times repelled by them. Being John Malkovich satirizes showbiz obsession while also successfully diagnosing self-loathing as the root of that obsession. Craig wants the strange portal that leads to Malkovich’s mind so that he can bed a woman that represents the epitome of his wildest erotic longings. Lotte yearns for Malkovich so she can realize her repressed desires to be a man. Craig’s employer Dr. Lester (Orson Bean, who quietly steals the movie) needs Malkovich’s body to evade death and to rejuvenate himself physically so as to win the affections of his “executive assistant” (Mary Kay Place).

The film is full of seemingly off-the-cuff jokes that enforce a poignant understanding that most people long to be famous because they otherwise don’t feel they deserve to have what they want. The executive assistant has an infirmity that could almost be called dyslexia of hearing, and for that she’s estranged from everyone except Dr. Lester, who, in his anxiety over his age, assumes that her inability to hear him has something to do with his own speech. Craig, stuck in a degrading file clerk job that bears quite a bit of resemblance to the kind of mindless office work that many struggling artists find themselves begging for, resents a puppeteer who achieved fame that greatly transcends the humiliations that he faces daily as an unpaid curiosity on an NYC street block.

But Jonze and Kaufman aren’t sentimental about these misfits; their blackest joke is that the one truly innocent person here, John Malkovich, is practically forgotten by film’s end. Malkovich’s life, to which he’s obviously entitled, is quietly erased, and we’re left to pity a narcissist, literally entombed by his obsessive feelings of inferiority, who’s now forever stuck on the outside looking in—his life ironically reduced solely to watching the symbolic TV that initially represented his ray of hope. If that isn’t an ideal metaphor for the world’s current unceasing hunger for media of all shapes and sizes, I don’t know what is.

One of my original misgivings with Being John Malkovich was its look, which was generally unvaried in its grit and muddy brown and green ugliness. Director Spike Jonze and cinematographer Lance Acord were obviously (and wisely) aiming for an unassuming, realistic atmosphere to contrast with the surreal outrageousness of the story, but the result was a relentlessly bleak aesthetic (which, admittedly, was probably part of the joke); I assume that New Yorkers are occasionally treated to the beauty and clarity of the sun. The Criterion transfer has righted this wrong. The image has been scrubbed of some of the grain and grit I remember from the theater print, which allows the film to look beautiful without compromising Jonze and Acord’s conception of the characters as occupants of a cramped, uncomfortable world of ugly corridors and little rooms overstuffed with unpleasant bric-a-brac (everyone in this film appears to be a hoarder). This image allows for more visual information, which particularly benefits the set for Craig and Lotte’s apartment, and is simply more pleasing to the eye. The sound was never a problem, but Carter Burwell’s score, which adds quite a bit to the film’s pathos, comes through with a clarity and richness I don’t previously remember. The rest of the mix is similarly excellent in detail.

At this point, one can reasonably expect a Criterion release to provide an eccentric collection of extras that illuminate the process of making the selected film in a fashion that’s considerably more revealing and interesting than the typical DVD that’s loaded with a smattering of meaningless PR pieces disguised as documentaries, and the Being John Malkovich Blu-ray isn’t an exception. In his selected-scene commentary that covers a total of about 50 minutes of the film, filmmaker and “competitor” Michel Gondry is refreshingly frank about his insecurity toward Spike Jonze after his own initial Kaufman adaptation Human Nature stiffed with the critics. Gondry confesses that he didn’t feel he was Jonze’s “equal” until the astonishing critical success of Eternal Sunshine of the Spotless Mind, his second collaboration with the screenwriter. Gondry doesn’t talk about Being John Malkovich directly all that much, but that fits with the roundabout nature of the other extras, which are more concerned with capturing the film’s essence in less literal fashions.

“All Noncombatants Clear the Set” is a short making-of doc that allows you to act as a fly on the wall as Jonze and company make their film, and the production would appear to be a typical movie shoot, which means that it epitomizes the phrase “controlled chaos.” In this piece, Jonze would appear to be a big kid, but that’s a conscious misdirection that John Malkovich contests in his frank 30-minute interview with humorist John Hodgman. Malkovich characterizes Jonze and Kaufman as two of the “steeliest” people he’s ever worked with, and exhibits an understandable ambivalence toward a project that uses a version of his life as a jumping-off point for a rumination on misplaced desire, among other things. Malkovich admires the duo, loved the script, but feels that the film was partially meant as insult, an impression that’s indirectly disputed by Jonze as he discusses his on-set photos. Jonze also explains his astute casting of Catherine Keener, whom he fought for, and Cameron Diaz, who exhibited a “sweetness” that he thought suited Lotte. 7 ½ Floor Orientation and “American Arts & Culture” Presents John Horatio Malkovich: “Dance of Despair and Disillusionment” are the full versions of the mock documentaries that appear in the film. An Intimate Portrait of the Art of Puppeteering provides free publicity for real struggling puppeteers and a booklet featuring a Jonze interview with pop-culture critic “Perkus Tooth” parodies the humorless Criterion-minded critic who mines every frame of a film for symbolism. While the extras are pointedly lacking in any input from the press-shy Kaufman (you see a fleeting glimpse of him in “All Noncombatants Clear the Set,” to which he answers a question with “no one cares”), this is about as generous and interesting a bevy of extras as any fan could hope for. TV spots and trailers are also included.

Time has revealed one of the best American films of the 1990s to be less a meta comedy and more a despairing satirical horror film.