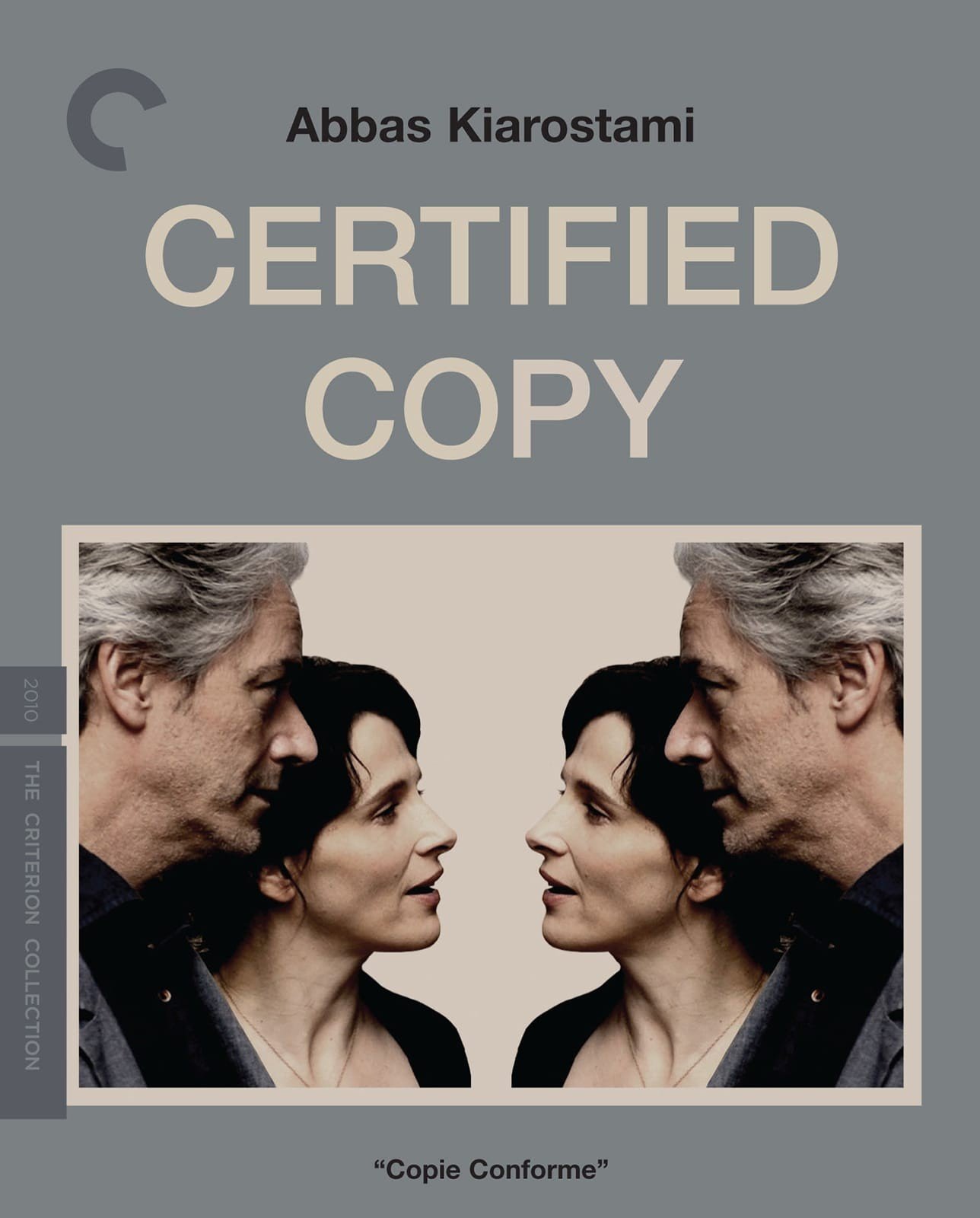 When Certified Copy made its first appearance in early 2010—at Cannes, to be precise—early reports from unenthusiastic correspondents seemed to suggest that, after a decade of making experimental, non-narrative shorts and features, Kiarostami had thrown in the towel and made something like Alfred Hitchcock’s To Catch a Thief. That is, a narrative souffle intended to disguise a “working” vacation in an ambrosial, sun-kissed quarter of Old Europe—the French Riviera for Hitch, Tuscany for the Taste of Cherry auteur. This veiled accusation of coasting seemed appropriate to some, given that interim works like Shirin and Five Dedicated to Ozu are even less user-friendly than the unconventional features that had brought Kiarostami to prominence, and that such a bauble as Certified Copy would surely make for a cool, sweet, undemanding breeze to reward us for our hard work and patience. But, as it became clear when the film played at the New York Film Festival, to more resoundingly unanimous praise, “coasting” could not be a less appropriate way to describe Kiarostami’s baffling, if admittedly temperate, feat. Certified Copy envelops wide swaths of cinematic heritage in its design, while remaining resolutely singular, casually seducing its audience, but denying them the aid and comfort normally expected of, well, art cinema by almost every other director not named Abbas Kiarostami.

For it’s Kiarostami who’s built his reputation on giving audiences tantalizing hints of story, from which, using their eyes and ears, they are to build worlds more detailed and profound than the camera and tape recorder can reproduce. If that also sounds like a certain, late French master, it’s true that for Robert Bresson, while worlds apart stylistically, negative space was a crucial part of the aesthetic equation. But while the Pickpocket director could be said to have a running theme of setting his characters free (even in death or heartbreak, or both), Kiarostami liked to illustrate the various ways in which his characters are trapped, even if they don’t realize it. Even if it’s by their own hand.

Not that that’s necessarily a bad thing. Kiarostami’s not a No Exit kind of guy, and on the evidence of his films, he isn’t even interested in drawing the specs of the “trap,” as it were. Instead, and particularly with Certified Copy, he shows his two principal characters, James (William Shimmell) and the unnamed “She” (Juliette Binoche), not as caged animals, but nevertheless enmeshed, befogged, and unable to break free of habit-based patterns.

The film practically opens on a scene of tranquility beset by interruptions, as the man and the woman “meet” before meeting; in the far part of a background that will probably escape the notice of first-time viewers, she accosts him for an autograph. A pattern of deflections and aberrations forms along deceptively simple lines, until our man and woman are set on an aimless drive on a Tuscan Sunday, where weddings proliferate, every shop is closed, and restaurants just can’t be bothered. It’s also a Tuscany that’s saturated with history and culture, from ancient times through the modern era. As one ancillary character says, the country is a great, big, open-air museum. It’s in this echo chamber of civilization and art that James and the woman are overcome, seemingly from within, by a spell that causes them to inhabit the role of a long-married couple, with a rocky, shared history that goes back 15 years, even though they’d only just met.

All of which sounds very prosaic, one of those “inciting events” that television writers use to spice up their weekly, 46-minute drama series, but, crucially, Kiarostami withholds any of that format’s comforting explanations. The proprietress of an espresso bar misconstrues them for man and wife, they acknowledge the mistake to each other, but refuse to correct it—for the remainder of the film. What started out as a light, seriocomic travelogue fringed with informal chit-chat on the nature of art and authenticity becomes a deadly serious turn of play-acting, in which James and his “wife” struggle to come to terms with that middle section of married life, between the blind optimism of newlyweds and the philosophical distance earned by the elderly. Some viewers have protested the absence of a psychological foundation for the mid-film rupture, and it’s true that the leap of faith the story requires may be too much for some, especially as the fault lines are nearly imperceptible.

Throughout the film we witness physical manifestations of what the characters discuss, but they’re slightly out of sync, requiring the viewer to remain vigilant, in order to track them. The most resonant of these is the statue in the piazza, never seen straight on, depicting a woman resting her head on a hero’s shoulder. Shortly thereafter, screenwriter Jean-Claude Carrière (presumably not playing himself, though it doesn’t matter one way or another) counsels a visibly befuddled James, telling him that all She, or any woman, really longs for, is for her man to walk beside her, providing a touch of comfort and support. Not long after that, in the most classically Kiarostamian moment since Through the Olive Trees, the pair enter and exit an old church, passing a nonagenarian couple on their way from church to home. As they stumble half-blindly across the square, the old husband holds his wife steady in his grip.

With the possible exception of Raúl Ruiz’s Mysteries of Lisbon, another 2010 premiere that also became the toast of countless 2011 year-end lists, Certified Copy is without peer in the league of recent films that make brilliant use of shifting, amorphous day- and early-evening light. Shot by the acclaimed Italian cinematographer Luca Bigazzi, Abbas Kiarostami’s film is a veritable painting in light, using the Red One camera to pay tribute not only to the indelible Tuscan landscape, but to the great painters who found inspiration there. As expected, Criterion’s transfer, using color grading and a digital interpositive approved by Kiarostami and Bigazzi, gets high marks in all areas.

It would be natural to assume that Certified Copy’s soundtrack is mostly talk. That’s true, to an extent, but there are many, many layers, woven with supple grace, that build a sound field around the couple’s travels. The sound field (birds, wedding music, the muffled hum of the automobile, the pealing of the bells) provide a barely perceptible yet undeniably dramatic accompaniment to the unfolding story, and Criterion’s 5.1 DTS-HD track (with dialogue in English, Italian, and French) is every bit as impressive as the high-definition picture.

In a 2012 interview, included here as a supplement, Kiarostami makes some helpful observations about the story (which had been in the back of his mind for 15 years before he made the movie), but, thankfully, preserves the delicate mystery. There’s also a delightful behind-the-scenes piece, “Let’s See Copia Conforme,” featuring interviews with Kiarostami, Juliette Binoche, and William Shimmell. The cherry of this Blu-ray release, however, is the second feature, Kiarostami’s 1977 film The Report, starring Shohreh Aghdashloo and Kurosh Afsharpanah. While materially worn and imperfect (the negative was destroyed in the 1979 Islamic revolution), The Report is an invaluable bonus for students of the director, and shares several key characteristics and images with his 2010 masterpiece. A booklet featuring an essay by Godfrey Cheshire is also included.

Under a Tuscan sun, Kiarostami disguises an era-defining masterpiece, one that somehow connects the dots between Bringing Up Baby and Last Year at Marienbad, in travelogue clothing. Criterion’s rigorous transfer work preserves the infinitely complex HD compositions and sound field.

Review: Who You Think I Am Offers a Muddled Perspective on a Catfish Story