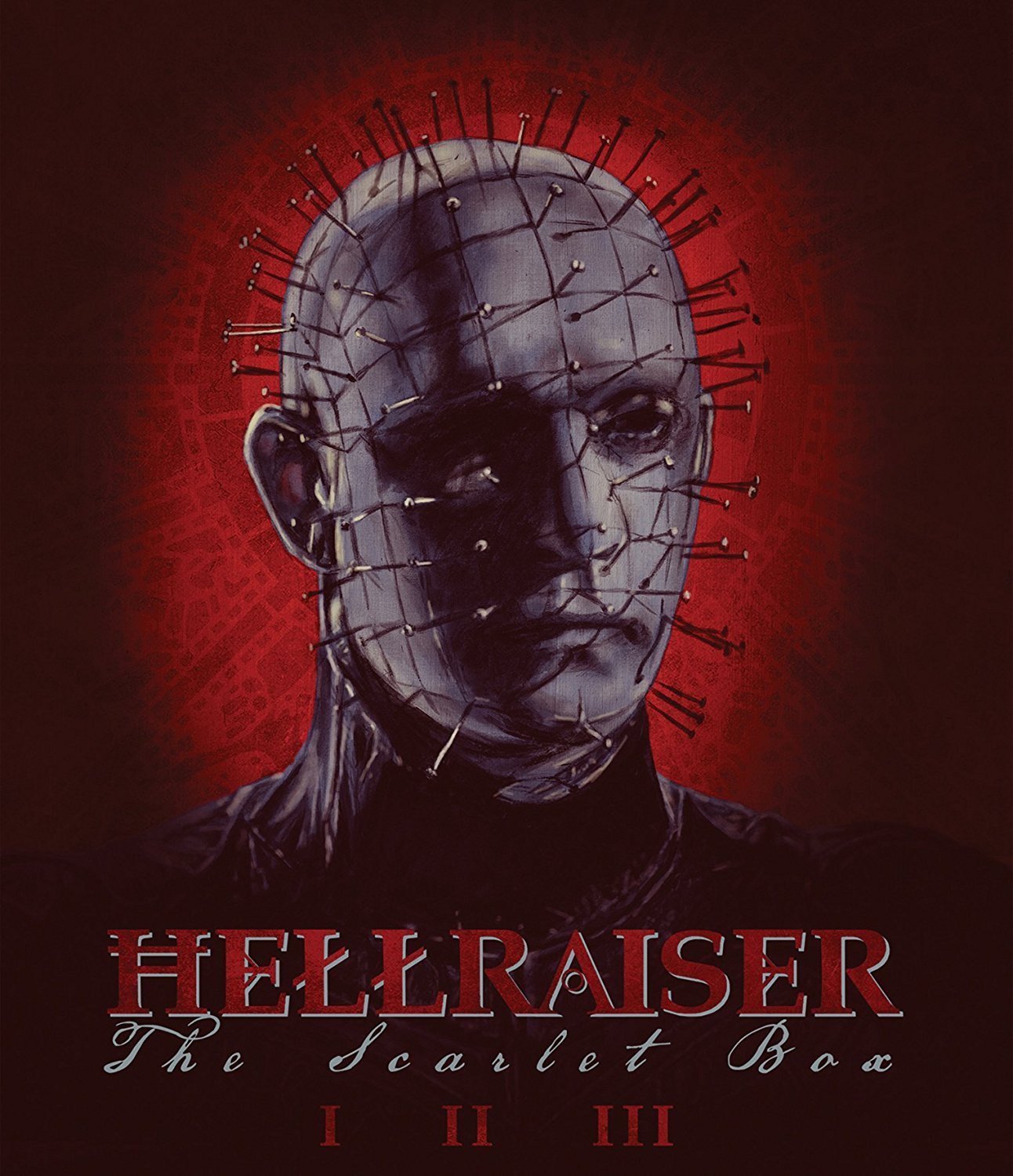 Clive Barker’s fervid imagination has always lingered fascinatedly at the intersection of splattery violence and transgressive sexuality. The Hellraiser films certainly never stint on graphic displays of the former, even if the latter receives increasingly short shrift after the kinky family dysfunction that undergirds the first installment. Human drama tends to recede into the background in subsequent films, leaving the monstrous Cenobites and their leader, Pinhead, to emerge as the franchise’s real focus. At the same time, the legitimately deviant S&M aesthetic these self-professed “explorers in the further regions of experience” once articulated so persuasively dwindles in relevance, displaced by the spectacle of squishy prosthetic (and eventually CG) effects. Nevertheless, there’s enough of a through line amid the expanding mythology—as well as continuity in the creative contributors behind the scenes—to consider the first three films as a bona fide trilogy.

Written and directed by Barker, Hellraiser is essentially a psychosexual chamber play—limited on the whole to a single location occupied by a handful of characters—that abounds in barely concealed domestic fissures and incipient amorous betrayals, not to mention some live human flaying thrown in for gruesome measure: Think Strindberg by way of Lucio Fulci. From the outset, Barker plays up the cultural and temperamental divide between American “innocent abroad” Larry Cotton (Andrew Robinson) and his icily beautiful British wife, Julia (Clare Higgins); and tensions only tauten once Larry’s grown daughter, Kirsty (Ashely Laurence), enters the scene. The revelation via flashback of Julia’s liaison with Larry’s bad-boy brother, Frank (Sean Chapman), adds the final twist to these tangled affairs.

Frank proves to be the film’s true catalyst from the moment he unleashes the Cenobites by solving the Lament Configuration puzzle box. The few glimpses we get into his relationship with Julia, mostly involving a trusty switchblade and an insatiable appetite, embody the kind of amour fou that routinely confuses consummating the act and consuming the lover. Frank’s polymorphous proclivities are further signaled by the diverse array of religious iconography scattered around his crash pad, as well as the snapshots Julia discover that attest to his serial infidelity. Casting Andrew Robinson (the unhinged serial sniper in Dirty Harry) as the initially anodyne Larry turns out to be an ingenious stroke after a major third-act shift in character occurs: Frank takes Larry over, donning his skin like some grisly Halloween mask, and Robinson has the opportunity to wring every ounce of avuncular menace out of Frank’s queasily incestuous advances toward Kirsty.

Like a lot of Barker’s work, Hellraiser brazenly exposes the traps concealed within the trappings of organized religion. The Cenobites—the term denotes members of a monastic order—preach the gospel of “pleasure and pain indivisible” by performing some rather extreme acts of asceticism (mortification of the flesh) on whoever summon them. Their brand of ritualistic transgression reaches its apotheosis when they mock-crucify Frank at film’s end. His last words are, ironically enough, the religiously charged epithet: “Jesus wept.” This scarlet thread of impiety will turn up again in the finale of Hellraiser III. Still, the problem remains: Barker (and, by extension, the series as a whole) never completely resolves whether the Cenobites offer an authentic vision of ecstatic liberation, or merely represent the agents of a conventionally punitive idea of the infernal.

Hellbound: Hellraiser II takes a page from Halloween II on how to jump-start a sequel, picking up soon after the events of the first film. As with Rick Rosenthal’s sequel to John Carpenter’s Halloween, the originator takes a creative step back, handing over directing duties to producer Tony Randel. Peter Atkins’s script broadens the mythology, delving into the human origins of Pinhead (Doug Bradley), and spends its second half navigating the labyrinthine byways of hell, whose dizzyingly receding vistas suggest nothing so much as the Krell machinery in Forbidden Planet.

Hellbound introduces a memorable new antagonist in Dr. Channard (Kenneth Graham), head of the asylum to which Kirsty is committed when nobody believes her account of what transpired in the house on Ludovico Road. Channard is, of course, soon unmasked as another seeker after forbidden knowledge; his efforts to resuscitate Julia Cotton flip the first film’s script, with him bringing patients home for her to feed on. In accord with the iron law of sequel-building that says bigger is always better, Hellbound’s visual effects are larger-scaled and even splashier, from Julia’s emergence from a blood-soaked mattress to showing the torturous creation of a Cenobite.

Hellraiser III: Hell on Earth is one unwieldy beast: part logical follow-up to the Pinhead saga, part early-‘90s, teen-targeted gorefest from Dimension Films. It’s also the first film in the franchise explicitly set and filmed in America. (Incidentally, the city meant to stand in for NYC—none too convincingly, I might add—happens to be Greensboro, NC, where I currently reside.) Atkins’s script cannily invokes a kind of dream logic for the sequences that illustrate the limbo state occupied by Pinhead’s human counterpart, and Anthony Hickox’s direction is most convincing when illustrating these surreal episodes.

Apart from one uncanny tableau that travesties the sacrament of communion, evincing some of the first film’s impious brio, Hell on Earth’s finale quickly descends into patent absurdity with Pinhead and a band of newly created Cenobites chasing wannabe journalist Joey (Terry Farrell) around a construction site. It doesn’t help that the Cenobites’ designs are little more than crude caricatures of the originals: One ejects razor-sharp CDs at lethal velocity, another possesses a TV-camera eye capable of zooming through somebody’s skull. At least there’s a visually impressive stinger in the very last shot to end the film on a note of welcome irony.

These 2K restorations look pretty smashing on the whole: color saturation and brightness have noticeably improved; contrast levels look balanced; and blacks are dense and well-defined. Grain levels can get pretty heavy throughout the first two films, and not only during nighttime or dimly lit scenes; the third film displays the finest granulation, but it also looks a bit soft on occasion. The transfers are free from any damage or artifacts, and it’s pretty obvious that Arrow hasn’t applied any DNR to the original film elements. Hellraiser and Hellbound are presented in Master Audio surround and LPCM stereo mixes, while Hellraiser III comes only in stereo. The stereo tracks are serviceable, but the surround mixes add depth and dynamic range to the ambient effects and Christopher Young’s lush, symphonic scores.

The Scarlet Box is a sight to behold. Each disc comes in its own case adorned with artwork from Gilles Vranckx (who also designed the cover); a fifth contains art cards, a booklet with original Hellraiser concept art, and a foldout reversible poster. The profusely illustrated hardback encompasses original press-kit materials, essays on the films by Clive Barker archivists Phil and Sarah Stokes, as well as details on the set’s technical specs. The films come accompanied by plenty of contextual materials: an abundance of commentary tracks (usually two per film), interviews with cast and crew, new and vintage featurettes, the nearly four-hour-long making-of documentary “Leviathan” (spread across multiple discs), and assorted BD-ROM content.

Among the new materials, the two-part interview with actor Sean Chapman, and the featurette on the abandoned Coil soundtrack for Hellraiser, with commentary from band member Stephen Thrower, are particularly noteworthy. The fourth disc includes two early Clive Barker short films, Salomé and The Forbidden, the latter of which offers significant visual and thematic overlap with Hellraiser. Horror novelist David Gatward provides an enthusiastic overview of Barker’s literary output. “Hellraiser: Evolutions” examines the franchise’s legacy, with some astute commentary from writer-director Scott Derrickson. And “The Hellraiser Chronicles: A Question of Faith” is a decent little fan film that was initially intended as a spec TV pilot.

Another top-shelf presentation from Arrow Video, Hellraiser: The Scarlet Box boasts crisp new 2K transfers and a cornucopia of bonus materials, all wrapped up in one gorgeously designed package.