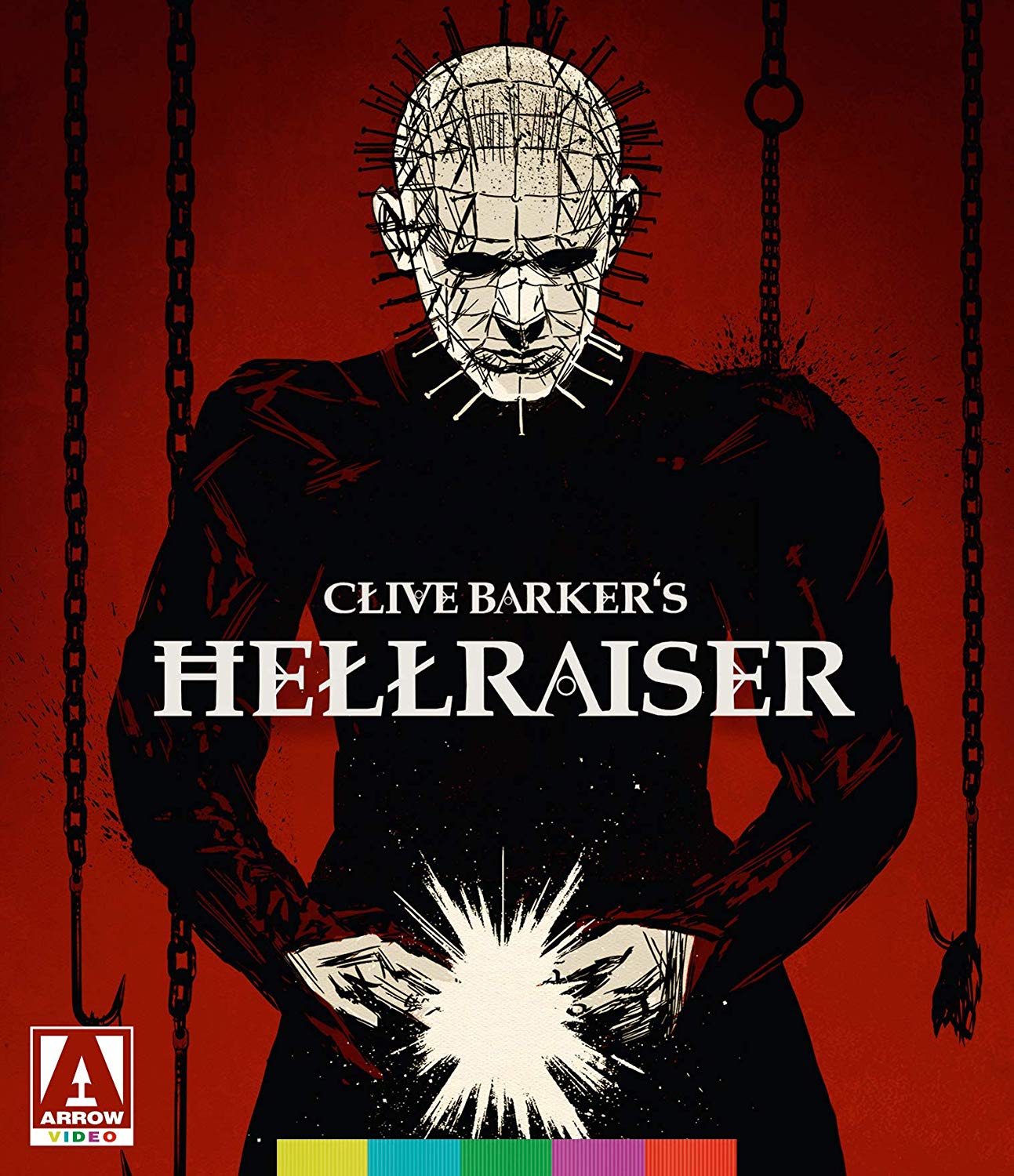 Violence and sex are intimately linked in the horror genre, though Hellraiser takes this connection to a remarkably explicit level. In his feature-length debut as a director, Clive Barker follows a family that’s splintered by its subterranean desires. Julia (Clare Higgins), not getting what she needs from her husband, Larry (Andrew Robinson), agrees to help Frank (Oliver Smith), Larry’s undead brother, restore his body with the blood of men she lures to the family’s home. Harlequin-like flashbacks, almost satirical in nature, explain the intensity of Julia’s commitment to Frank (played in human form by Sean Chapman), who brings Julia to climax with the threat of valuing his pleasure over hers. Frank eventually took his pain-as-pleasure ethos to supernatural levels, hence his present existence as an ectoplasm in the attic of his and Larry’s family estate—a place which Barker pointedly sprinkles with gaudy religious iconography (as well as clichéd haunted-house motifs).

Barker is in sync with a hunger that’s especially taboo now: the desire to be objectified and dominated. Larry is a sensitive and agreeable patriarch who exudes the stability we’re supposed to like about well-adjusted men—a callback to the 1950s-era idea of the nine-to-five breadwinner. Frank, stereotypical in an opposing direction, is the taut stud who has intense sex with Julia immediately upon meeting her. In the way he contrasts the men, Barker reveals that he’s too comfortable with shorthand, as he provides little context as to the brothers’ relationship beyond such broad differences. Larry never shares a scene with either the hot or grotesque version of Frank, which feels like a result of narrative pruning as well as, perhaps, a paucity of imagination. Larry isn’t quite a prudish foil, as Robinson imbues the character with a clueless vulnerability and earnestness that’s poignant, though he’s nevertheless undernourished, especially since there are also so few scenes between him and Julia.

Hellraiser often suggests a familial drama, though Barker isn’t especially interested in dramatizing the textures of domesticity. As sexually neurotic ‘80s-era chamber body-horror films go, Hellraiser is much thinner emotionally than The Fly. Where David Cronenberg is authentically interested in his characters, Barker regards Frank, Larry, Julia, and Frank’s innocent young-adult daughter, Kirsty (Ashley Laurence), mostly as variables necessary in the unleashing of his symbolism. Nonetheless, what gives Hellraiser its graphic power are the visual metaphors that Baker fashions for the yearning of the annihilation of self.

Barker establishes Frank to be a wayward stud who travels the Earth, presumably for the ultimate orgasm. His adventures lead him to a metallic Chinese puzzle cube that, when manipulated correctly, unleashes the Cenobites, otherworldly agents of torture and pleasure who, per the ringleader who would be identified in sequels as Pinhead (Doug Bradley), can serve as either angels or demons. With their rotating wooden pole of disembodied flesh, flesh-tearing hooks, leather gear, and deformities that are the result of hungers that had be actualized at the cost of the corporeal body, the Cenobites are unmistakable symbols of the fear and desire that can afflict those tempted by sadomasochistic sex. They also suggest debauched rock-stars who are so burned out they must travel all realms of existence to find comparative lambs for induction into their theater of damnation.

The Cenobites—especially Pinhead, a regal demon with pins sticking out of a white, bald dome that’s animated by piercing, hauntingly intelligent eyes—would become pop-cultural icons, and Barker uses them shrewdly and sparingly, contrasting them with the somewhat repetitive conflict between Larry, Frank, and Julia. One suspects that Barker wants the audience to yearn for the Cenobites, a reaction that fosters a kinship between us and the people of the world who have cravings which mainstream society abhors. (There’s a gay subtext in Hellraiser, and even an incestuous one, as Larry comes to steal Frank’s body—an act that feels sexual in itself—while leering at Kirsty.) Released during the AIDS epidemic, the film offers a nightmare of extremes: Frank and the Cenobites are prisoners of their libertinism, while Larry and Clare are entombed in the bitterness wrought by platitude and politeness. Both existences feel like hell.

This new 2K restoration of Hellraiser, approved by cinematographer Robin Vidgeon, is rich and attractive, abounding in deep browns and blacks, garish reds, purposefully shrill whites and silvers, and robust flesh tones. Quite a bit of grain in this image, though it’s appealing and feels inherent to the film’s handmade, low-budget aesthetic. Two sound mixes have been included, an uncompressed PCM 2.0 and a DTS-HD MA 5.1, and both offer an immersive sound stage, though the Cenobites’ clinging and clanging really soars on the 5.1. Both mixes also honor the rich and elegant beauty of Christopher Young’s score, which goes a long way toward distancing Hellraiser from the various other ‘80s-era horror series.

“Leviathan: The Story of Hellraiser” is a feature-length documentary that offers an engaging deep-dive into the making of the film, particularly in terms of how its memorable creatures and special effects came about. (Doug Bradly, the actor who played Pinhead, is an especially memorable interview subject.) Clive Barker is notably missing from “Leviathan,” but he has two audio commentary tracks here, one by himself and the other with actress Ashley Laurence. The second track is unsurprisingly looser and more conversational, but both abound in juicy details about the film’s construction, symbolism, use of sets, and evolution of effects. (Barker is particularly engaged with an evocative bit of crosscutting, in which a flashback to Julia’s affair with Frank is interspersed with a sequence in which Larry tries to move his and Julia’s marital bed up into their bedroom.) Interviews with actors Sean Chapman and Bradley offer more insight into the film’s making, while another talk with ex-Coil member Stephen Thrower discusses the Hellraiser score that might have been. A variety of other odds and ends round out an excellent package, including a trailer and TV spots, an image gallery, a vintage featurette, and even drafts of the film’s screenplay via BD-ROM.

With a beautiful new transfer, Arrow Video reminds us that time has been relatively kind to Clive Barker’s sadomasochistic morality play.

Blu-ray Review: Leon Gast’s When We Were Kings on the Criterion Collection