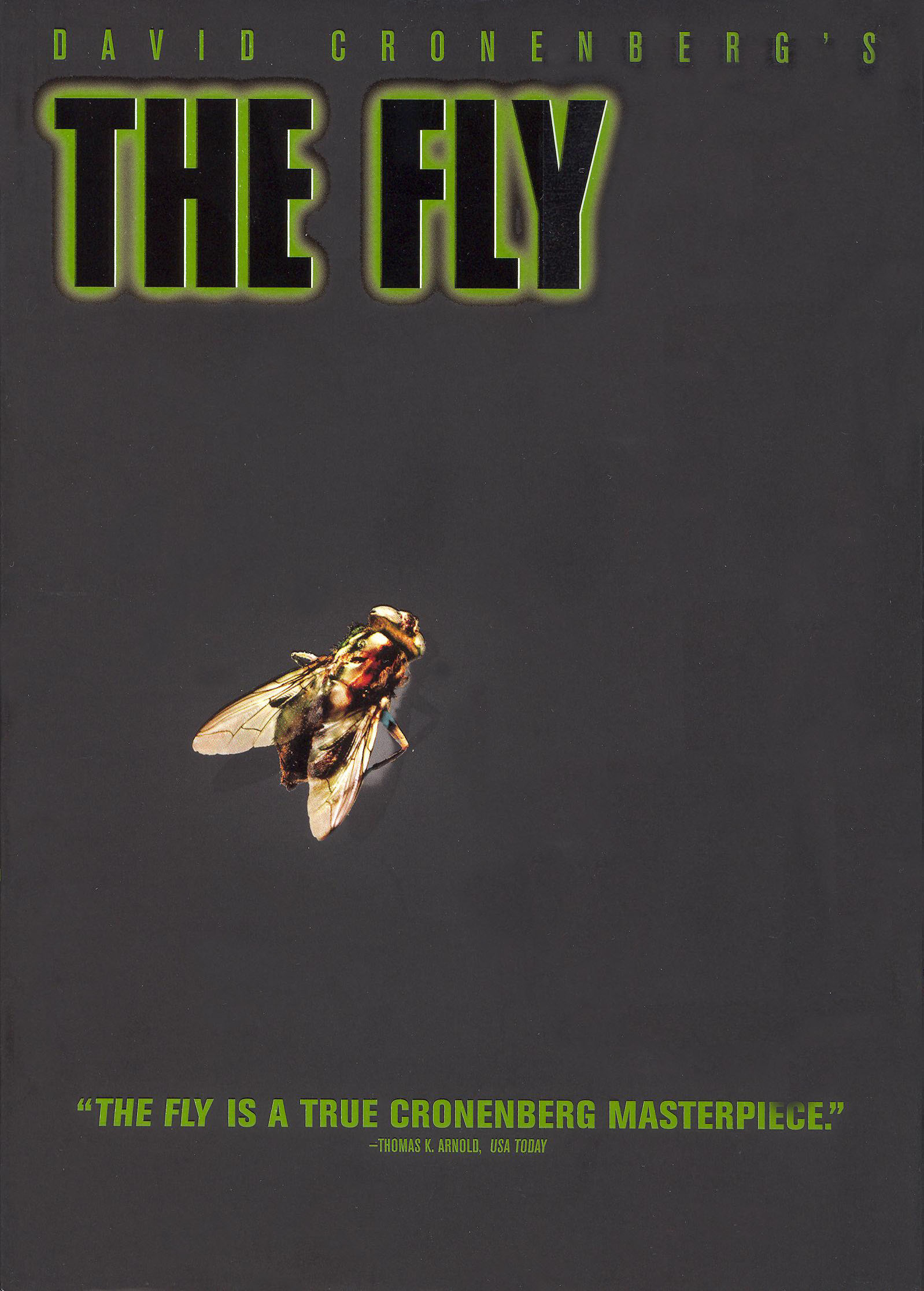 David Cronenberg’s 1986 remake of the sci-fi schlockfest The Fly is celebrated as perhaps the most perfectly balanced of Cronenberg’s pre-prestige films, with as much attention paid to the director’s infamous knack for exploiting the audience’s own hang-ups about the deficiencies and unpredictability of their own bodies as is toward his almost completely humorlessness take on the splatter genre. Admittedly, the tale of a scientist accidentally fusing his own body with that of a housefly might not on the surface have as much potential to spur our icky introspection as the violent couch potato epic Videodrome or his uncompromising examination of life and death at the end of a hood ornament Crash (still his most underrated film). Thankfully, Cronenberg’s draft of Charles Edward Pogue’s screenplay switches focus from the damsel in distress freakshow of the original 1958 film to (predominately) the slow transformation and decomposition of the human body and what it does to that body’s owner. Still, the damsel remains in the picture in the form of Geena Davis’s reporter-cum-girlfriend, who doesn’t only watch the degeneration from the sidelines but ties the film together with the biological implications of her situation actually gestating in her own womb.

Jeff Goldblum’s good show as the doomed scientist who invents a set of teleportation pods (could it be where wireless communication branches out next?) and runs that tragically unsanitary test run probably recruited more acting students to enroll in those Sanford Meisner technique classes he teaches than any of his other performances, but Cronenberg uses Goldblum’s intense, studied self-interruptions and uncharted smirks to good effect. When he first emerges from the pod, suddenly all pectoral muscles, he mistakenly cites his fly-inherited, exoskeletal physique and gymnastic prowess as evidence that his computerized invention doesn’t really transport physical matter so much as it refines and purifies it. His buggy eyes initially seem filled with testosterone, not the presence of other compound eyes trying to emerge. Those thick hairs that begin sprouting out of his back represent, to him, the final stages of sexual maturation. And is that excess semen leaking from his fingertips?

Though The Fly rewards a generalized reading as a metaphor for terminal illness without too much unused, leftover thematic material (hell, it’s a pretty fantastic little horror flick/chamber tragedy on the surface, hence the easy tag line “Be afraid. Be very afraid.”), almost every one of The Fly’s viscous substances reflect the of-the-moment AIDS panic, re-characterizing the film as something of a requiem for the pool orgy abandon of the director’s decade-earlier They Came from Within. The first scene of the film is an unmistakable sexual pick-up, in which Goldblum entices Davis to come to his apartment to see his private discovery, something that will change the world. Once there, he tells her to submit a material piece of very personal currency so that he can demonstrate the machine’s purpose; she chooses, and at great length removes, her stocking.

Once Davis establishes herself as Goldblum’s confidant in scientific experiment and in copulation, he hems and haws about taking the final leap by transporting himself in the machine but insists that she be present when he does. Unfortunately, when Davis’s magazine editor ex-boyfriend comes back into the picture, he drinks himself into a spell and conducts the climactic self-experiment, which emerges as both masturbatory as well as extremely risky sex-based behavior. The parallels continue, accumulating into a spiral of depression, until Davis’s visits to Goldblum’s flat to witness the degradation begin to resemble game-faced appearances at the AIDS ward, trying within all her faculties not to lose her composure while he babbles on about creating an “alternative family unit.” In its galvanizing portrait of a body ravaged and sexual stasis infected by bugs, The Fly might be Cronenberg’s most direct horror film ever.

The Fly has one of Howard Shore’s seminal musical scores, a florid, sensual reflection of romantic rapture interrupted by gothic horror. The 5.1 Dolby remix keeps Shore’s contributions prominent. It also handles a lot of the technoid sound effects in a manner conducive to the film’s cramped loft environment. The video clarity isn’t quite as refreshing, but at least the film’s look isn’t quite as washed out and overly bright as previous video incarnations. The blacks look sort of blotchy (not unlike Goldblum’s seemingly acne-plagued face halfway through the film), and the climactic smoke and blue-strobes reveal that deficiency, but overall this is a serviceable transfer.

David Cronenberg doesn’t think his film is about AIDS, according to his commentary track, so much as it’s about aging in general. Eh, it’s about a lot of things. In the same sense, The Fly’s “Collector’s Edition” has a lot of stuff on it, beginning with that Cronenberg commentary. It’s almost perversely level-headed, filled with tossed-off revelations (like the fact that Mel Brooks himself, whose Brooksfilms production company funded the film, came up with the “Be afraid. Be very afraid.” bit) and a number of theoretical readings of the implications of his work. His voice is dry and college prof-like, but there’s a ton of insight in that voice, both from an analytical standpoint as well as a pure filmmaking perspective. He also admits that if The Fly were a straight drama, it would be too unbearable and depressing to have ever been filmed, which aligns it with many of the other great horror films that tell great truths through the veil of their genre: The Texas Chainsaw Massacre, Romero’s zombie films, et al. In case that wasn’t enough, though, check out the new three-part “making of” documentary that, in its “extended” version, runs almost twice as long as the film itself. It’s packed with so much on-set video footage, test runs on make-up effects, and other production-related ephemera that the spill-off in the separate galleries seem almost beside the point. The documentary also includes a lot of footage of Jeff Goldblum doing his drama teacher thang. “I’m ramped up, I’m trying to fly, but I also am stuck inside this human body. I take time out to-mmph, uhn-figure out what parts of the fly’s body are pushing up against my own body. Ooh, tssss, ow! Where is my pain coming from today?” The commentary and documentary cover almost everything that anyone could want from special features, but extra features have accrued onto the second disc like so many insects on flypaper. There are deleted scenes (including a bizarre alternate ending that’s like a replay of the finale of 2001, only returning AIDS panic back to the ‘60s notion of free love, or something), the three stages of writing that led to this version of the film (the original short story by George Langelaan, Pogue’s script, and Cronenberg’s rewrite), more effects footage, a featurette on the “Brundle Museum of Natural History,” collected magazine articles and photo galleries, and the requisite promotional materials. Someone dumped a few extra spoonfuls of sugar into their coffee when planning out this special edition DVD.

I say The Fly is maybe Cronenberg’s most accomplished straight horror film, but, then again, a dentist just knocked out three of my teeth.