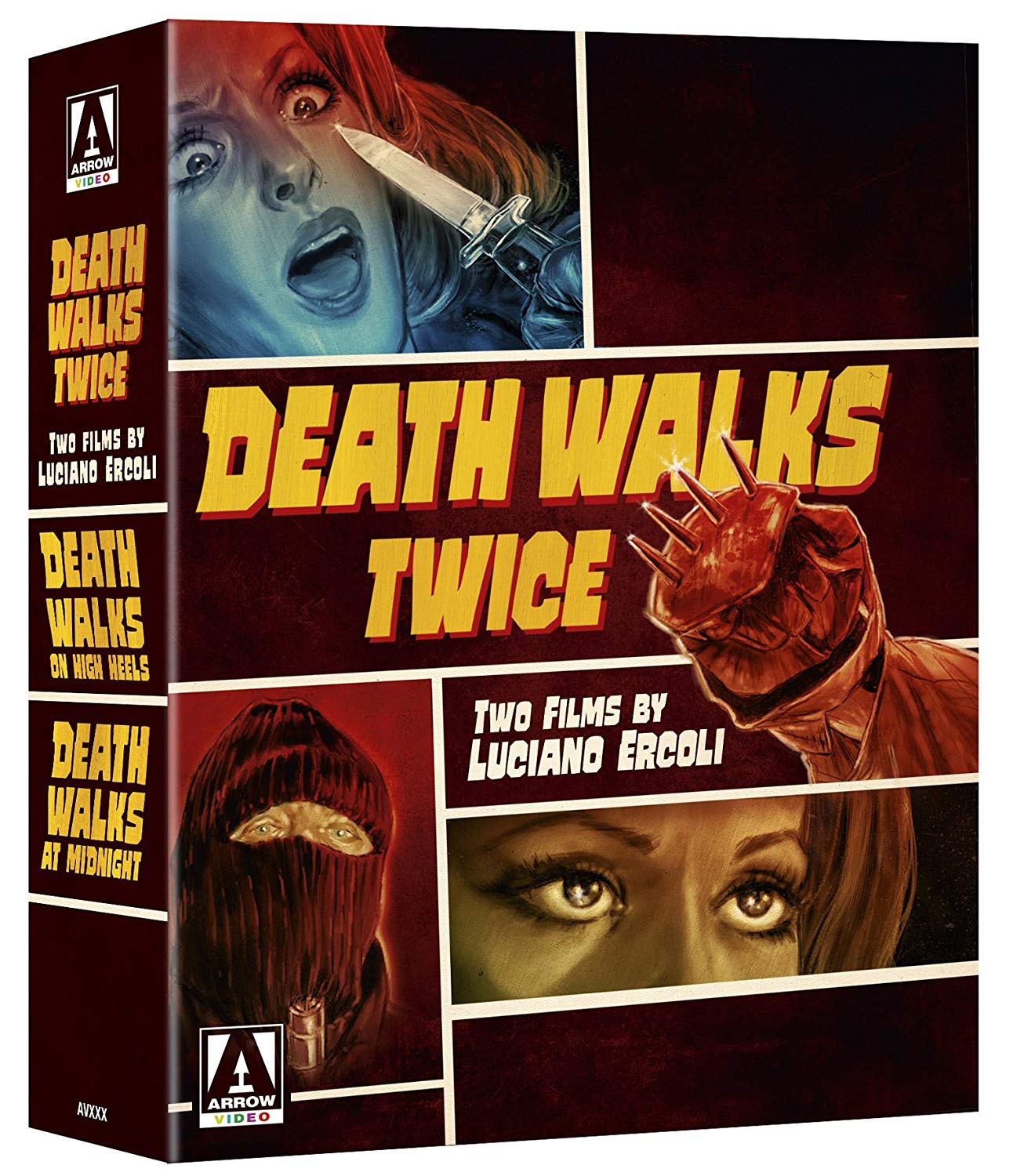 The giallo films of the early 1970s, among them Luciano Ercoli’s Death Walks on High Heels and Death Walks at Midnight, are some of the least discussed films by North American writers, partly because these works have, until recently, been unavailable in quality prints or transfers. Or, just as likely, because they’re regarded as low culture, and as such unworthy of standing alongside the more culturally legitimated films that were being made at the time by members of the New Hollywood movement and purveyors of numerous international new waves. But a film like Death Walks on High Heels, with its exacting on-location shooting, strong-willed female lead, and set-piece-oriented construction, provides an illuminating bridge from Hitchcock to De Palma in mapping the development of a certain transnational film style. That is, De Palma’s cinema, especially in Sisters and Dressed to Kill, appears as equally indebted to Ercoli as Hitchcock, if not more so for a particularly sensual attunement to the ways cities are as capable of generating artifice as a matte shot on a backlot.

Hitchcock famously bucked trends of the late ‘50s by making his films almost entirely on the studio lot and, with the exception of The Wrong Man, conceptualized the human sensorium in relation to what could be concocted through edits, music, painting, and lighting. By the ‘60s, early gialli like Mario Bava’s The Girl Who Knew Too Much reflexively sought to transport Hitchcock’s aesthetic aims to the streets, where terror lurks in open spaces as frequently as one’s motel bathroom, but with a similar dedication to an operatic film form. Death Walks on High Heels, for example, opens with a grisly murder on a train, followed by a freeze frame of the killer’s masked face. The next shot hurtles through the streets of Paris, set to Stelvio Cipriani’s peppy theme music, with the Eiffel Tower looming in the background. This narrative choice expresses an indebtedness to Hitchcock (the murderer and victim appear to have been strangers on a train), but there’s a formal shift through the reclamation of on-location photography—a core tenet of neorealist technique.

Perhaps the gialli can be understood, in part, as a hybrid cinematic mode attempting to reconcile the city’s role in ongoing formations of contemporary terror while deploying expressionist visual markers. That’s the case in Death Walks at Midnight’s opening scene, where Valentina (Nieves Navarro) sees flashes of a murder occurring in an adjoining apartment and POV shots reveal a disembodied iron first pummeling an unseen figure, literally resulting in blood consuming the frame. Later, as Valentina sneaks into her neighbor’s apartment to search for clues, the blatant Rear Window reference point is cemented, but with a crucial difference being the depth of field Ercoli achieves not just across apartments, but also within them, which further emphasizes that actual spaces themselves as being part of the gialli’s identity. Even seemingly innocuous settings within the city, whether an outdoor café or a high-rise office with geographical markers seen in the distance, consistently demarcate lived experience, an environment unfolding in real time.

Nevertheless, both films still inhabit the anxieties of their female lead, whose jogged memory often results in haunted recollections of her assailant’s face. In Death Walks at Midnight, the sunglassed-man who stalks Valentina appears suddenly in close-up and his newly seen face prompts not just Valentina’s terrified reaction shot, but a subsequent shot of blood spattering across the killer’s face—a callback from the murder sequence. In effect, Valentina brings her surroundings into being through spectral memory and Ercoli equally liters both films with numerous close-ups on eyes—not just of Navarro’s, which are aplenty, but the eyeball as the source of trauma, whether related to person or place.

In fact, Death Walks on High Heels has a subplot involving a man undergoing extensive eye surgery, with a sequence of extreme close-ups on an eyeball being delicately touched and attended to. One realizes, of course, the film is a potential second away from recreating the infamous eye-slashing shot from Un Chien Andalou. In this moment, Ercoli alludes to cinema’s ultimate surrealist provocation, but it’s more than a shout out; it’s a manifesto for the gialli, which positions itself as a truly referential mode by synthesizing historically low forms (Hitchcock, genre) with high ones (neorealism, French New Wave) into something paradoxically approaching high-concept art and a progenitor of cinema’s postmodern aesthetics.

Utterly gorgeous and triumphant, these transfers of two Luciano Ercoli gems mark some of Arrow Video’s finest transfer work, with these films looking as impressive and fully restored as they’re likely to ever be. Neon colors pop and flourish throughout, with nary a texturing flaw in sight. Wide shots of Rome and Paris emphasize location specificity and the image remains balanced from reel to reel. Nearly all superfluous blips or tears have been eliminated, but grain remains consistent and present across both films. Similarly, the soundtracks have been remastered in DTS-HD, and both tracks highlight their respective film’s quality score and foreground dialogue with crisp, perpetually audible precision.

Arrow collects an assortment of supplements for each title that are nearly overwhelming in their scope and depth. Each film receives a brief introduction from screenwriter Ernesto Gastaldi, who also gives a separate, in-depth interview for each film regarding its development and construction. The highlight here is his chat entitled “Master of Giallo,” where Gastaldi not only dishes on craft, but talks shit about how The Bird with the Crystal Plumage cheats at doing what any giallo should seek to do: provide a carefully calibrated map that allows an attentive audience member to properly guess the killer’s identity. A commentary track by film critic Tim Lucas accompanies each film, with Lucas proving an adept, knowledgeable guide through each film’s production and significance, both as a giallo and a contribution to Italian filmmaking. Otherwise, there are interviews galore, featuring extended archival talks with director Luciano Ercoli, star Nieves Navarro, and composer Stelvio Cipriani. Also included is the extended TV version of Death Walks at Midnight and an illuminating video essay by Michael Mackenzie on both films and the earlier Ercoli/Navarro collaboration, “Forbidden Photos of a Lady Above Suspicion.” A 60-page booklet with essays by three critics rounds out this nearly perfect collection.

Arrow Video provides monthly evidence that there’s an entire sector of European cinematic production that’s gone long underappreciated, and the company’s staggering box set Death Walks Twice: Two Films by Luciano Ercoli is some of their most convincing work yet.

Review: Howard Hawks’s Only Angels Have Wings on Criterion Blu-ray