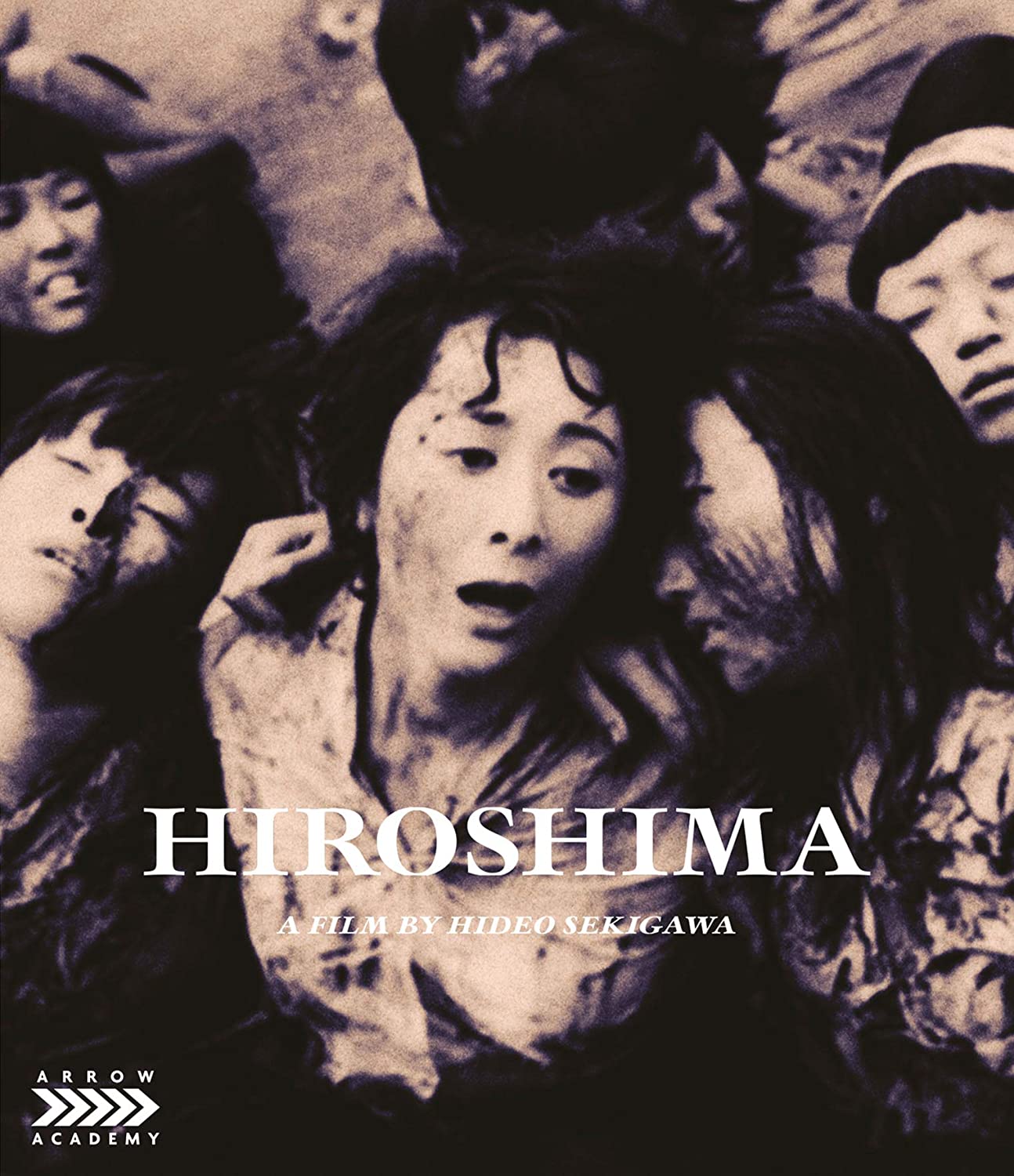 Much like Alain Resnais’s Night and Fog warns of the horrors in forgetting human atrocity, Hideo Sekigawa’s Hiroshima uses its reenactment of the United States’s 1945 bombing of Nagasaki and Hiroshima to call for an end to the development of atomic and nuclear weaponry. The most didactic of such moments occurs near the film’s end, as Yukio Endo (Yoshi Katô) explains to his teacher, Kitagawa (Eiji Okada), that a local factory has begun producing artillery shells. “We’ll all end up like this!” he exclaims, in reference to the radiation exposure that’s causing a variety of cancers in people throughout Japan, among them several students in Endo’s class.

The film is an incongruous patchwork of tones, invoking the neorealist aesthetics of Vittorio De Sica’s Shoeshine and the Red Scare paranoia of Don Siegel’s Invasion of the Body Snatchers, but its mix of pathos and cautionary rhetoric is reflective of how the despair of a country’s populace resembled a schizophrenic bedlam. While the film features passages that sentimentalize the catastrophic toll of the A-bomb, Hiroshima also complicates its political outlook with a two-pronged indictment of how both the U.S. and Japan have minimized the value of human life. To that point, the film works best as a time capsule for understanding how, nearly a decade after the atomic bombings, Japan was historicizing its own past to educate audiences in hopes of creating a future free of either atomic or nuclear warfare.

Despite containing multiple stretches of archival footage that predominately show actual devastation caused by the bombings, the film minimizes its initial newsreel realism with a melodramatic plotline across which a handful of teenage students and their teacher, several years after the bombings, either espouse or reject Japan’s military actions in contrived fashion. Sekigawa’s tear-jerking direction—replete with a remarkably sorrowful score by Akira Ifukube—places the actual bombing at the film’s core and chronicles the immediate aftermath over the span of a 30-minute sequence that features young children crying out for their parents and teachers while buried under debris. Hiroshima revels in such imagery to the point that you might question the motivation behind the representation and ask if the film, like Paul Greengrass’s United 93 more than 50 years later, by framing real-life tragedy as spectacle.

But if it’s difficult to see United 93 as anything other than a cheap 9/11 simulator, Hiroshima wrestles itself away from a similar fate by broadening its scope during its final third, during which Endo becomes the film’s protagonist. A schoolboy when the bombings occurred, he’s now a teenager flirting with delinquency, roaming the streets of Hiroshima and antagonizing younger boys. His antisocial behavior stems from his enduring the trauma of his missing sister, as well as his anger over having his innocence stripped away. One afternoon, he dips into a movie theater to see Charles Chaplin’s Monsieur Verdoux and emerges having taken the ironic line “One murder makes a villain, millions a hero” to heart. In making an American film the thing that awakens Endo’s consciousness with regard to personal responsibility, Hiroshima complicates its more rote expressions of unthinkable tragedy by acknowledging how art—and especially the movies—can cross borders and constructively shape hearts and minds.

The high-definition transfer on this Arrow Academy Blu-ray is an unusual beast. At its best, the image is clean, appropriately and pleasantly grainy, and almost entirely free of scratches. At its worst, deep scratches are so apparent that they nearly outnumber that areas of the screen that don’t have them, leaving one to assume that those responsible for the restoration had to work with multiple prints of vastly varying quality. The audio track, while listenable, is no less compromised, as it abounds in pops and distortion. Still, this transfer must be graded a success on a fundamental level for offering a widely unavailable film in hi-def.

A trio of extras offer helpful contextual information on both the making of the film and the physical and psychological toll of the bombing of Hiroshima and Nagasaki. Writer and curator Jasper Sharp narrates an excellent video essay about how the catastrophe impacted “Japan’s nuclear imagination,” by which he means the way it’s been depicted in films, either directly or tangentially. Sharp rattles off titles of monographs and films with the precision of an expert scholar, even spending a bit of time looking at the English-language posters for several films, including a rather tasteless one for Hiroshima that promised: “It blasts you out of your seat!” The 2011 documentary Hiroshima Nagasaki Download brings the matter of nuclear imagination into the 21st century, and features interviews with survivors of the bombings who now reside in the United States, Canada, and Mexico. Finally, a brief archival interview with actress Yumeji Tsukioka dives into her recollections of shooting the film.

While the transfer certainly leaves a lot to be desired, it’s thrilling to have Hideo Sekigawa’s little-seen drama finally available on Blu-ray for the first time.

Review: Uchida Tomu’s Procedural Masterpiece A Fugitive from the Past on Arrow Blu-ray

Review: Hiroshi Teshigahara’s Woman in the Dunes on Criterion Blu-ray

Review: Paul Schrader’s The Comfort of Strangers on Criterion Blu-ray