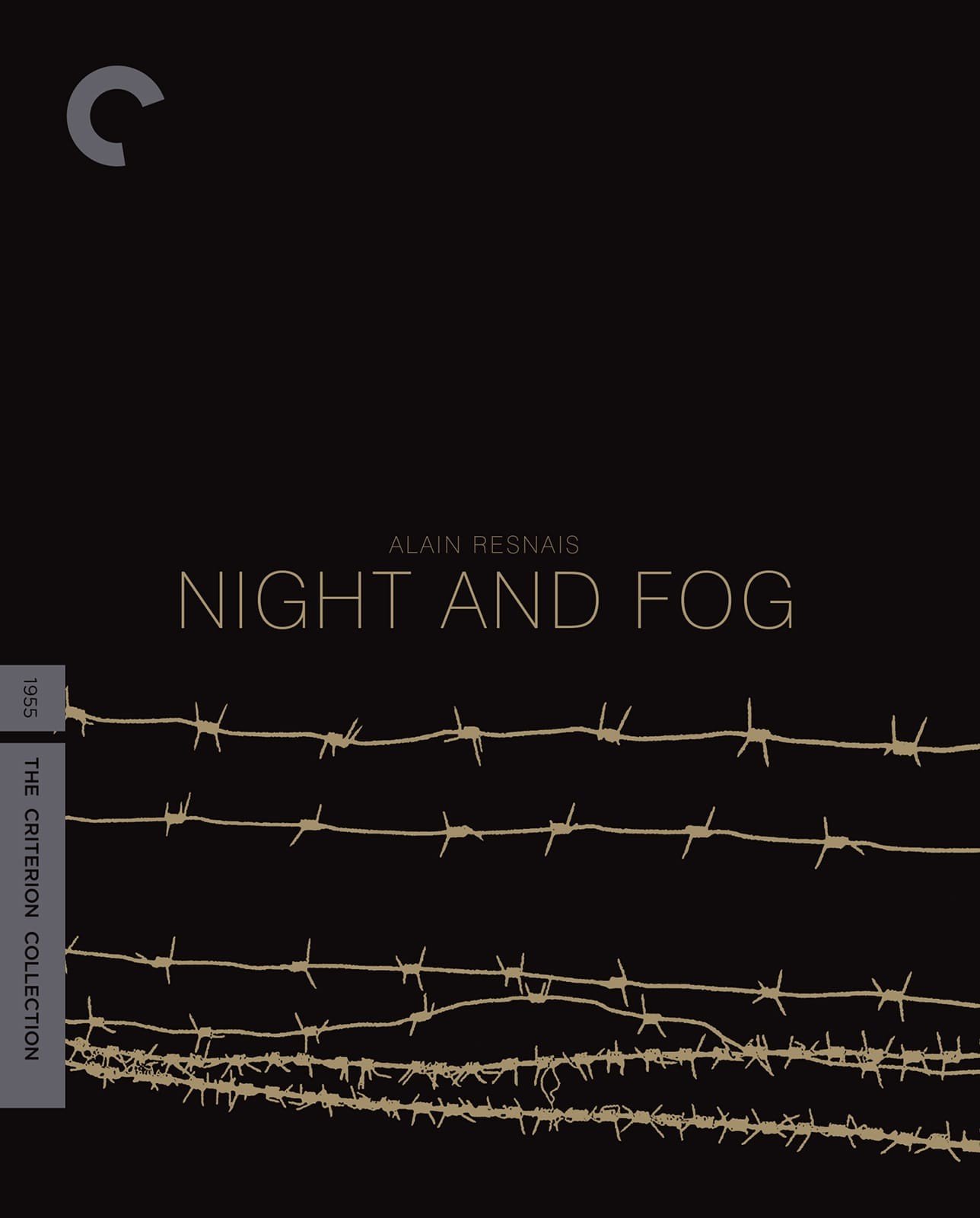 The opening shot of Night and Fog encapsulates Alain Resnais’s interest in descent, of falling from a falsely perceived safe space into a dangerous one. Here, that means glimpsing a reasonably pleasant landscape from a high angle, though it’s a little too flat and arid to qualify as idyllic. Once the camera moves down, a barbed-wire fence comes into frame and eventually settles at the foreground, imploring the viewer to revise their prior sense of contentment. The shot structure repeats twice more, with different landscapes aiming toward the same conclusion, made clear by writer Jean Cayrol’s voiceover narration: “Even a resort village with marketplace and steeple can lead to a concentration camp.” Cayrol’s words are initially instructive through their seeming implication that certain locations could more reasonably lead to such a place, but as that logic lingers, it’s clear that the opening statement functions less literally than rhetorically, in that every space, no matter its location, is potentially filled with the anger, xenophobia, and complacency that allows a human-made catastrophe to emerge in the first place.

These opening shots, in color, were captured a decade after the end of WWII, yet Resnais keeps them perpetually related to the black-and-white images and footage that follows—footage shot by the Nazis while operating the camps. Night and Fog forgoes a detailed contextualizing of the emergent Third Reich, offering instead glimpses of the party’s development in 1933, which leads to Cayrol’s assessment that “a concentration camp is built like any stadium or a hotel.” By emphasizing rationality and procedure, the film descends from possible abstraction and into the muddied waters of material reality. Still images of workers and the snowy terrain of several camps emphasize that each of these places were not only built, but that it, of course, took a considerable length of time and manual labor to do so. If that point seems trite, then it’s precisely these seemingly obvious factors that compel the film’s unflinching interest in how supposedly rational operations, which can be found in any town or city, could have become so horrifically perverted.

Yet because Resnais never asks this question outright, Night and Fog maintains a considerable distance from reaching any finite conclusions about the destructive machinations of either human psychology or systemic racism. Rather than proffering a thesis about the events, as one might expect from a more conventional documentary, Resnais and Cayrol test the limits of cinema’s capacity for response to both tragedy and misery by contesting the aesthetic norms of dealing with taboo subject matter. The music by Hans Eisler, almost chipper in its deployment of woodwind instruments, provides a counterpoint to the exhuming of corpses and images of imprisoned, starving people, but not in a manner that overpowers the images because, well, how could it? In choosing a less obvious musical cue, the film asks the viewer to take stock of their relationship with cinematic depictions of real-world events. After all, it’s that very medium that helped fuel war efforts on all sides, especially in an era where the sheer scale and size of theatrically projected images were particularly capable of overwhelming all reason or intellect.

If Night and Fog explicitly directs the viewer’s gaze toward the horrors of the Holocaust, it implicitly directs that gaze away from the vacuous components of industrial life, be it commercial art or consumer culture. The film is a radical rejoinder against any form of distraction that “turns a blind eye to what surrounds us and a deaf ear to the never-ending cries,” as Cayrol says at the film’s end. In that sense, Night and Fog is comparable to Blood of the Beasts, which is set in and around several French slaughterhouses; each also has a similar structure and actual images of death, even though they’re dealing with slaughters of different sorts. Resnais’s film makes sense of catastrophe through contrasting moments in time, whereas Georges Franju reveals violent, daily operations that are just out of plain sight. Yet both link themselves with addressing the contradictions of civilized order, where daily violence becomes quotidian and an accepted component of any modern reality. It’s a point that sticks with us into the present and seemingly will until we can collectively resolve one of Cayrol’s questions, which he asks of any possible executioner: “Are their faces really so different than ours?”

Criterion’s 4K transfer benefits most from the material shot in color, which now looks even more serene than on the previous DVD and further heightens the image contrast. Outdoor greenery and mounds of rubble are remarkably detailed, with depth of field and color timing calibrated for maximal precision. As a title card that precedes the film states, this transfer made little effort to restore the Nazi footage used in the film, which apparently follows Alain Resnais’s wishes. Nevertheless, that footage remains mostly clear and visible, for better or worse. The monaural soundtrack carries both the voiceover and music with clarity and the track is free of any cracks, pops, or hisses.

Though the disc is light on explanatory supplements, Jean-Louis Comolli’s feature-length documentary “Face aux Fantômes” more than compensates for the absence. Its essay-film structure mostly uses testimonial footage featuring historian Sylvie Lindeperg and does a remarkable job of both inhabiting France’s national memory of the Holocaust, while using Night and Fog, and the controversy surrounding its release, as a means to make greater sense of the aftermath. Aside from that gem, there’s a brief audio clip of Resnais speaking about the film in 1994 that explains why a certain image in the film almost prevented it from being released. But the real highlight is a 15-minute interview with Joshua Oppenheimer, who offers a simultaneous appreciation and analysis of the film that’s comparable to his contribution for Criterion’s release of The Thin Blue Line. His insights are sharp and pointed, particularly his attention to the way Resnais uses backlighting in a brief segment to make an ominous, archival image seem all the more contemporary. Finally, an essay by Colin MacCabe examines, in part, France’s reluctance to admit their role in the Final Solution and how Night and Fog fits in.

No film about human-made catastrophe has ever been as concise and evocative as Night and Fog, which has been fully restored on Blu-ray from the Criterion Collection.