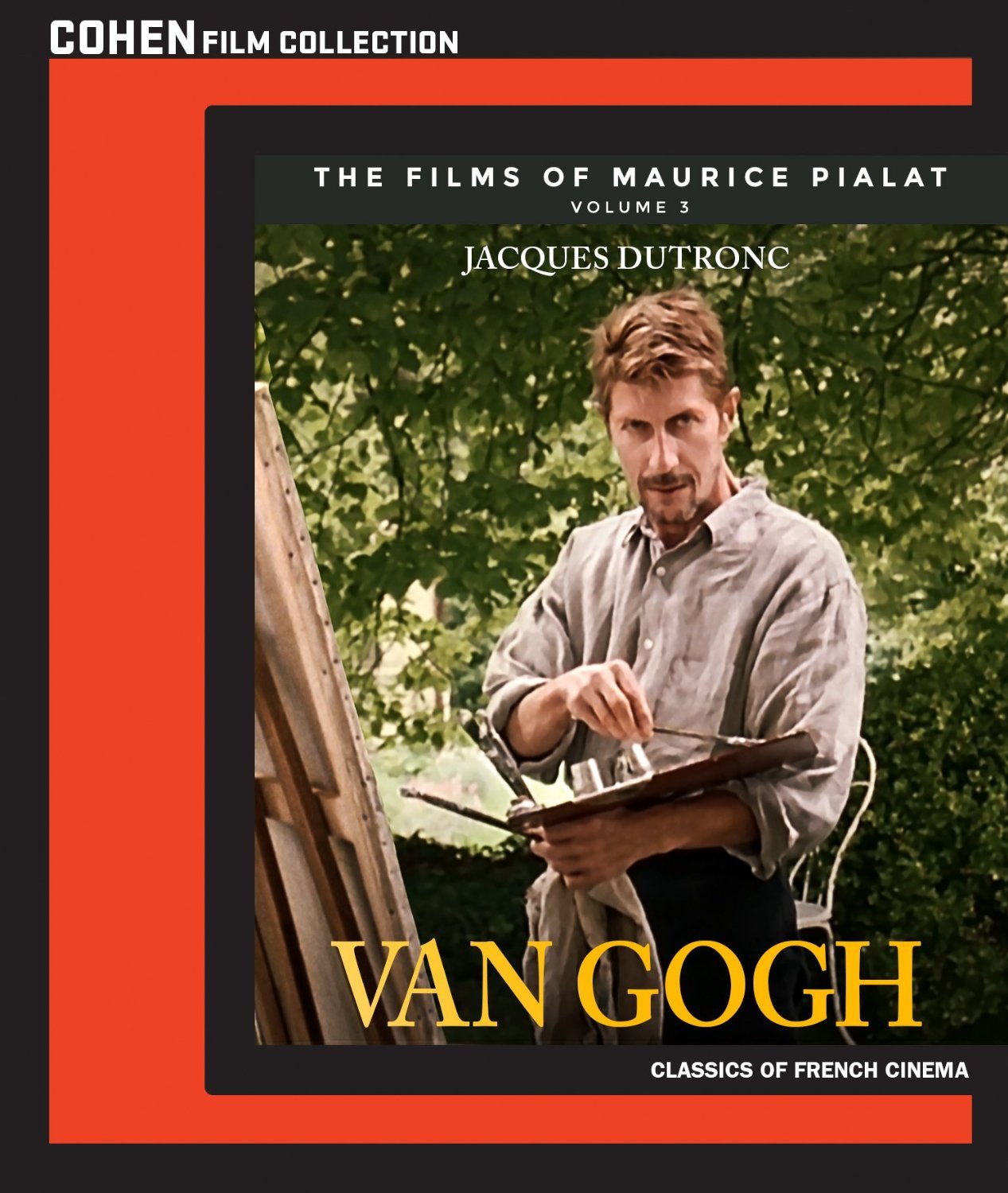 In 1956’s Lust for Life, Vincente Minnelli captured Vincent van Gogh’s antisocial mania and his harum-scarum dealings with the mainstream art world. With 1990’s Vincent & Theo, Robert Altman fixed his attention on the swirl of meretricious forces surrounding the doomed artist, and in typical Altmanesque fashion, the ways in which the talons of commerce make fools of those with integrity. French filmmaker Maurice Pialat evidently found both approaches too dramatic. His own fictionalized account of the Dutchman’s waning days, 1991’s frankly titled Van Gogh, leeches late-19th-century France of sensationalism, barely treating it different than he would one of the drab modern locales of his contemporary dramas. In doing so, van Gogh’s neuroses and shortcomings end up looking much like those of Pialat’s standard anti-hero, a man driven to let his worst self gradually overshadow his best.

In the film’s first evasion of melodrama, the story begins in the period of the artist’s life that most other van Gogh biopics reserve as a coda—that is, well after the painter’s slicing off of his own ear, in the days following his discharge from the asylum at Saint-Rémy. These early scenes of van Gogh’s arrival in Auvers-sur-Oise to the residence of one Dr. Gachet (Gérard Séty) reveal the artist (Jacques Dutronc) as a frail ghost of a man haunting the peripheries of social interactions. He’s more bystander than participant, and this characterization is much closer to Altman’s than Minnelli’s, though Dutronc’s crumpled physique and skeletal facial features are entirely his own, a severe presence that commands Pialat’s roomy compositions in spite of being on the fringes of the frames. In fact, the director often allows a bit of padding before and after the ostensible focus of each scene occurs, seemingly just to observe how the man enters rooms, sits down, or looks out windows.

Pialat plays freely with lore so as downplay the flights of melodrama we associate with van Gogh’s turbulent career, and one of his striking deviations from historical record is to introduce a tenuous love triangle between van Gogh, Gachet’s daughter, Marguerite (Alexandra London), and Cathy (Elsa Zilberstein), a prostitute the painter knew from the city. The pair of female temptations seems superfluous on paper, especially since van Gogh was notoriously too cuckoo to have any love affairs at this point in his life, but their inclusion releases the artist from the pigeonholing realm of lunacy, grounding him in human desires. Both women appear at a riverside party held by Gachet in honor of van Gogh’s arrival, and when the painter canoodles Cathy in a way that invokes their years of camaraderie, it lends him an earthy sensuality rarely afforded to van Gogh in cinematic depictions of his life.

Marguerite, on the other hand, is a less natural companion; in fact, her first interaction with van Gogh is as his model. However, soulful conversations follow, and the naïve piano prodigy soon falls for the artist, a man 20 years her elder. But tempting as it may be to ascribe Marguerite to van Gogh’s romantic reason and Cathy to his libido, Pialat includes scenes to complicate both readings: In one charged two-shot, van Gogh looms menacingly behind Marguerite as she buttons her top following sex, and later, during a sojourn in a Paris brothel, he bears his soul to Cathy, who responds by spurning him. Pialat characterizes van Gogh as a man of constantly conflicting urges and dispositions, his gentleness existing directly alongside his hard edges.

Van Gogh’s freewheeling social examination extends as often to the people around the artist as it does to him. Theo van Gogh (Bernard Le Coq), for instance, is allowed an inner life rarely granted to this seemingly opportunistic art-world schmoozer, who, in a series of private scenes with wife, Jo (Corinne Bourdon), unveils his ambivalent feelings toward his brother (“I wish he painted like Renoir,” he admits at one point). When van Gogh endures this brutal honesty face to face, Pialat confines the screen to a close-up of the artist pensively fielding Theo’s constructive criticisms, a visual choice that echoes an earlier scene where Marguerite receives her father’s disapproval of her affair with his guest. If Pialat’s sympathy isn’t always detectable amid the film’s democratic parceling of dramatic attention, it’s evident in moments like these, and especially affecting when considering the director’s own struggles with the gatekeepers of his medium.

As for van Gogh’s actual artistry, Pialat’s film omits any depiction of the creation of the painter’s major museum staples, but he still imparts a deep understanding of the man’s work. In addition to several canvas-level observations of impasto brushstroke action, the director provides a handful of glimpses of van Gogh’s process: a moment when he straightens Marguerite’s back to fix her figure just so at the piano bench, for instance, or another time when he not-so-gently tugs at the village idiot’s (Didier Barbier) mop of blond hair to give it the appropriate expressionist vigor.

Van Gogh itself shares nothing of the painter’s aesthetic abundance, as it’s defined by Pialat’s usual austerity, eschewing a non-diegetic soundtrack and limiting camera movement to slight, though significant, reframings. But the film does breathe with exceptional fluidity from shot to shot, with provincial summertime France in 1890 comprehensively recreated if only to contribute lively background texture. As one of the director’s few excursions into period cinema, Van Gogh excites as much for these pinpoint atmospheric touches as it does for its implicit encompassing reminder, in representing the famously tortured mastermind as a recognizably coarse individualist, that artists have faced comparable uphill battles throughout history—sanity intact or not.

Van Gogh’s cinematography, handled largely by L’Argent cameraman Emmanuel Machuel, with additional work by Gilles Henry and Jacques Loiseleux, is marked by a sun-dappled softness that Cohen Film Collection’s new Blu-ray renders gorgeously. The delicate palette consists of pastel greens, muted tans, and baby blues, a reflection less of the vibrant range of van Gogh’s color palette than of his diminishing inspiration, and none of these toned-down shades bleed together on the screen. Sound is quiet but fully alive, sensitively treating the film’s blend of natural ambiances and intimately recorded dialogue.

With approximately two hours cumulatively between four subjects, the interviews are the main event here. An aged Dutronc, with cigar and wine in hand, meanderingly recalls, from atop a seaside hill, his director’s cantankerousness and directorial secrecy; Bernard Le Coq offers a surprising counterpoint by reflecting on the calmness of Pialat’s set; Machuel delves with great specificity into the challenges of working toward a naturalistic look while also respecting the director’s in-the-moment methods; and filmmaker Xavier Giannoli, in the longest and most unwieldy segment of all (shot, unflatteringly, against a blank grey wall), elaborates on Pialat’s seismic influence on international art cinema today. Most rewarding of all is a lengthy deleted-scenes supplement that forgoes simply presenting outtakes without comment and actually saddles us up next to the Steenbeck with editor Yann Denet, who clarifies the thinking behind the film’s unused pieces—a real peek into the treasure chest of a film with so many striking elisions.

Cohen Film Collection elevates Van Gogh to its rightful status as the work of a world-class auteur at his peak with a package that splendidly presents and contextualizes the film’s greatness.

Review: Richard Linklater’s Everybody Wants Some!! on Paramount Blu-ray