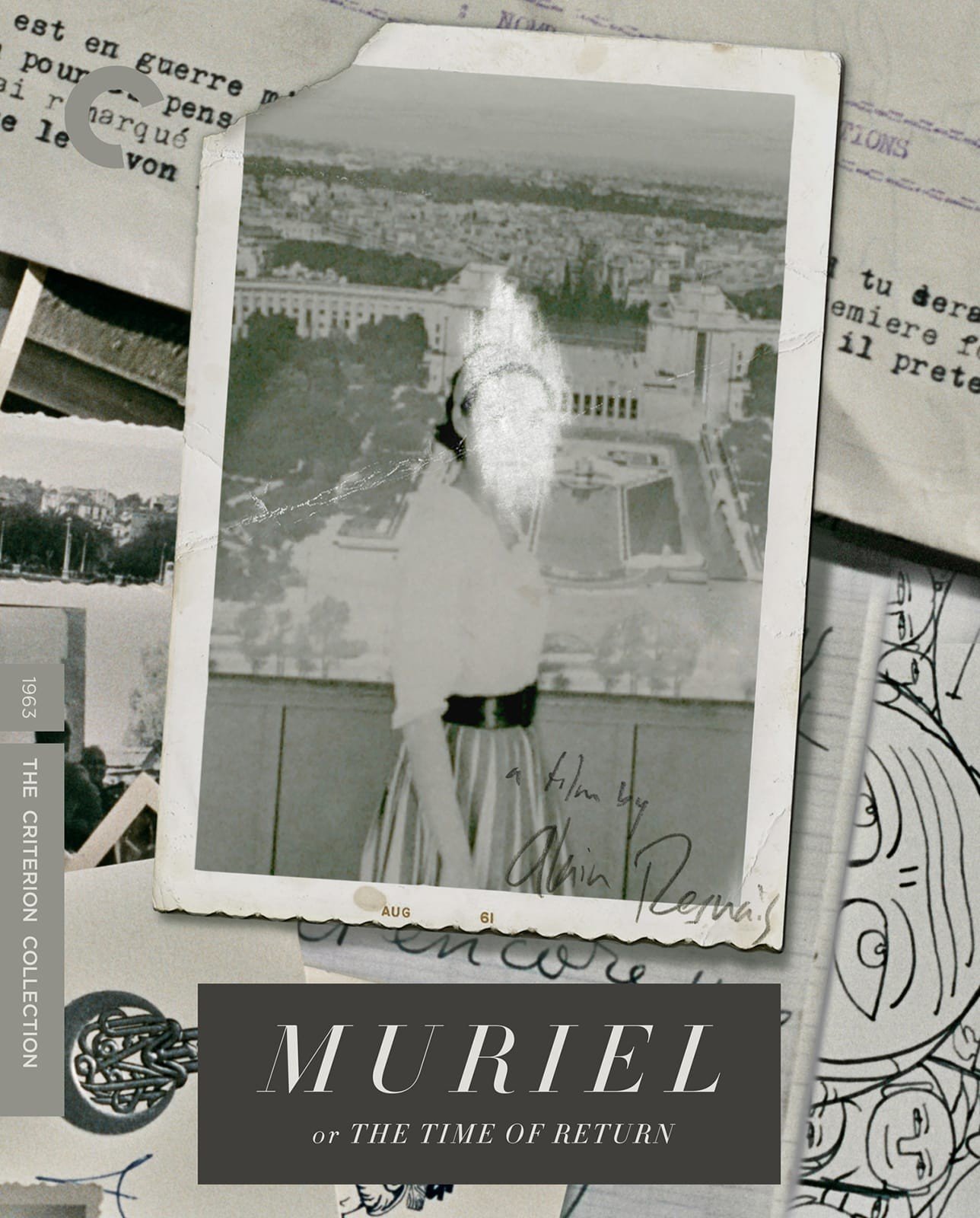 With Muriel, Alain Resnais departs from the corridors of an unnamed château in Last Year at Marienbad and into the streets and houses of Boulogne, but his characters continue to grapple with hazy memories of a previous point in time that could very well be fabricated recollections spawned from their own lived traumas. That’s because Resnais, along with screenwriter Jean Cayrol, conceives of a “coming home” story for two French soldiers that omits depictions of Algeria, the place they’re returning from. One of these men, Bernard (Jean-Baptiste Thiérrée), is a restless twentysomething living with his stepmother, Hélène (Delphine Seyrig), who peddles antiques out of her claustrophobic apartment. At least, Resnais achieves claustrophobia by using edits that obscure spatial continuities. In fact, the opening shots (25 in as many seconds) announce that there will be no easy access point to this space, highlighting various objects, tools, and portions of faces and bodies without any clear sense of where they are in relation to one another. But this isn’t merely a defiant maneuver by an experimental filmmaker; it’s an instruction manual for how to view the rest of the film, which follows a similar, albeit more narratively inclined, editing structure.

The film’s formal difficulties bleed into the narrative itself, which introduces names and characters in passing and implies backstories left almost entirely unseen. When Alphonse (Jean-Pierre Kérien) arrives in Boulogne with Françoise (Nita Klein), a woman he claims to be his niece, Resnais shoots their moving through the city streets with Hélène in fragmentary fashion. The sequence climaxes as the trio are each given distended close-ups while they move toward the camera, as if time were rewinding a few seconds for each new shot. These choices surely signal some degree of disorientation for the characters, yet Françoise announces how nice it is to be away from a small town. They seem content, just as Hélène’s apartment-cum-shop appears to be in some degree of order, not least because the hostess scrambles around all night procuring foods and cakes for her guests, delectables that the camera follows and, through successive cuts, inventories. “This is paradise,” Françoise says, all while Hélène continues to apologize for not being able to offer more.

Cayrol’s script initially unfolds without a clear sense of where the film’s significance lies, as characters don’t so much reveal their anxieties or desires as offer empty pleasantries to one another. Subsequently, however, Françoise’s pleasantries reveal an anxiety about her past, complex relationship with Alphonse and her seeming need to earn Bernard’s approval. Hélène’s meals prove overcompensation for her gambling addiction, concerns for Bernard, and uncertain status with Alphonse, her former lover. Alphonse, who fondly speaks of his time in Algeria, proves to be both hateful toward the Arab people and resentful of a homeland where his past can’t immediately become his present. And Bernard, whose time in Algeria has clearly driven him into a child-like state of denial and regret, treats Françoise as an accompanying pet whom he can discard whenever he chooses.

However, all of these ongoing revelations conceal something more than trauma or discontent, with Resnais calling upon found photographs and letters written by Bernard to indicate what’s actually ailing all of these characters: an intractable past coupled with an unknowable present. As Alphonse sifts through Bernard’s belongings, one of his letters states, regarding the Algerian people, “They’ve got their revolution. What about us? Go back to France, to find what?” Bernard’s also seen in a picture with Muriel, an Algerian woman, though his face has been blackened out. It seems Bernard hasn’t attempted to erase his own memory, but to efface himself via physical distortion of a photograph, the ultimate indexical document and arbiter of a past reality. As Susan Sontag argues in her book On Photography, a photograph, in general, is a deceptive means for remembering the past because it fosters a mentality which “looks at the world as a potential set of photographs,” thus making its seeming passivity a deceptive form of aggression that taints one’s memories of personal experience. By breaking spaces apart through editing and rejecting photography as a sentimental totem, Resnais works against this overriding tendency.

Yet the filmmaker’s characters, helpless to their conditions, simply cannot. As the film’s title indicates, time becomes inextricably connected with a person, who stands in for a remembrance of a place. It’s an imperative distinction, because Muriel is only spoken of through Bernard’s recollections, which are wholly deluded on one hand, since he claims to be visiting her in Boulogne, and pathologically psychotic on the other, since he recounts her implied rape and murder by concluding that he “felt nothing.” No violent confrontations or reconciliations resolve these problems in Muriel, but a deeper violence has been in the film’s system all along—one of self-hatred and systemic alienation—that leads to a final tracking shot through Hélène’s apartment that follows a character as she searches for signs of human life to no avail.

An immense improvement over Koch Lorber’s 2007 DVD transfer, Criterion’s 4K digital transfer brings the film’s images into stunning clarity, with every inch of the frame scrubbed of debris and calibrated for maximal clarity. The interior of Hélène’s apartment especially benefits from the restoration, with the spatial clutter now a more visible component of the mise-en-scène. Scenes set on the countryside and near the sea are also standouts for their diverse color palettes. Only a few scenes, like one with Hélène in bed speaking to Alphonse standing in the doorway, appear “off” in their clarity, with haziness to the image that’s otherwise absent. The monaural soundtrack is serviceable, clearly relaying dialogue and music without distortion or malfunction.

A solid, if mostly standard, assortment of supplements trots through expected terrain, with a clip from a documentary about Resnais and archival interviews with Delphine Seyrig and composer Hanz Werner Henze speaking about their contributions to the film. The only major critical supplement is an interview with film scholar François Thomas, who examines the film’s editing and themes in order to demonstrate how they all relate to a displacement of time, which recurs throughout Resnais’s oeuvre. Given Thomas’s insights, one longs for an accompanying video essay that could make greater sense of technique in relation to theme, as the discussion, while pointed, seems underwhelming without precise visuals accompanying it at every turn. The film’s trailer is also included, as is an essay by film scholar James Quandt.

While more narratively conventional than either Hiroshima mon Amour and Last Year at Marienbad, Alain Resnais’s third feature pushes the director’s formal interests into a tangible political realm that refuses easy access to its traumas. The Criterion Collection’s gorgeous, 4K Blu-ray transfer has finally restored one of the essential films of 1960s arthouse cinema.

Sheffield Doc/Fest 2020: Mon Amour, Film About a Father Who, & The Kiosk

Blu-ray Review: King Hu’s A Touch of Zen on the Criterion Collection