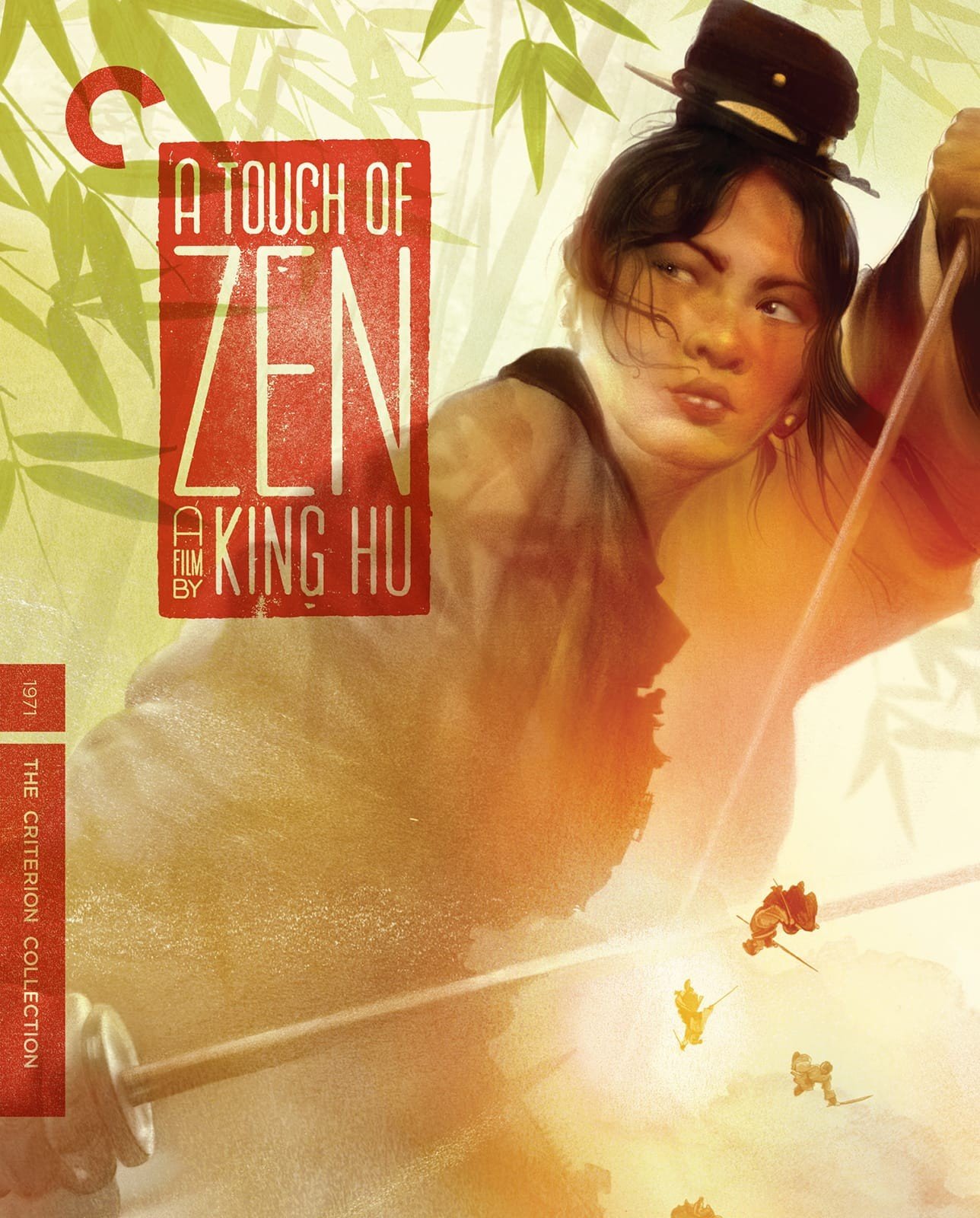 The first clangs of steel don’t happen until almost an hour into director King Hu’s A Touch of Zen, a grand-scale wuxia film that finds poetry in cinematic movement and action through the prismatic lens of genre. Comparable to Sergio Leone’s Once Upon a Time in the West for its playful tone and knowing deployment of archetypes, the film offers visually experimental battle sequences inside of a narrative mostly driven by chronological clarity and character development. Accordingly, the basis of wuxia isn’t contested, unlike in Hou Hsiao-hsien’s The Assassin, so much as given a stylistic injection that allows for scenes with lightning-fast editing, slow motion, split-screen, color inversion, and quick-zoom close-ups.

It also allows for a deliberate pacing that, in Touch of Zen’s first hour, isn’t typically associated with the wuxia genre. As the camera finds Gu Sheng-zhai (Chun Shih), an aspiring scholar of the Ming Dynasty era, he’s opening a small studio where he draws sketches and portraits. Hu treats this early scene with unusual intimacy, as Gu readies his instruments and places paints in their appropriate position. The choice seems less strange, however, once a shadow cast by Ouyang Nian (Tian Peng), a mysterious loner, gradually covers Gu’s face, causing the pair to eventually lock eyes. A small exchange such as this encapsulates Hu’s filmmaking prowess, as he introduces a sense of fear and impending consequence through subtle changes within the mise-en-scène instead to resorting to threatening dialogue or overt, physical intimidation.

A Touch of Zen’s narrative is as convoluted as it is enthralling, with dozens of characters weaving through the film’s three-hour runtime. Moreover, the structure of the film causes unannounced shifts in primary action, so that Gu is initially the protagonist, but recedes to the sidelines as further details emerge regarding the identity of Yang Hui-zhen (Hsu Feng), a mysterious young woman living alone in a supposedly haunted mansion. Her identity fascinates Gu, whose mother (Cheung Bing-yuk) chastises him for not being more ambitious in his pursuits, either as a professional or lover. Initially, her goading leads Gu into Yang’s company, resulting in the pair’s off-screen consummation of a presumptive marriage, but Yang’s actual identity as a fugitive (and warrior princess) seeking shelter from members of the callous Eastern Depot completely dispenses with Gu’s expectations of marital calm.

While such expositional material could easily prove lumbering and tiresome in its deferral of conflict, Hu instead accentuates the sensuality of delayed narrative fulfillment with prolonged sequences of characters moving through darkened spaces and looking for one another. Hu follows eyelines with just as much, if not more, interest as his characters’ swords, so that Gu’s inquisitive gaze at Ouyang’s dubious activities attain an intense immediacy that even later scenes of characters fighting while anchored from bamboo stalks don’t quite match. While A Touch of Zen does indeed build to numerous fight sequences of varying setting and style, Hu’s primary strength as a storyteller lies in the assured narrative bridge he builds to get there.

The film’s final half introduces Yang’s allies against the capturing pursuits of the Eastern Depot’s villainous Men Da (Wang Jui), including General Shih Wen-chiao (Pai Ying) and a monk (Roy Chiao) whose weaponless fighting tactics explain the titular “touch of zen.” It also helps to explain Gu’s role in tactical warfare, as his plan to booby trap the allegedly haunted mansion, rather than launch an all-out assault, proves an effective means of combat. Given that Gu is initially an audience surrogate into the surrounding world of swordplay, torture, and defending one’s honor, his plan may also encompass Hu’s own narrative pursuits: indirect, but efficient.

Indeed, there’s a precision to A Touch of Zen that’s consistently reformed by Hu’s shifting use of color and cuts, so that the film never settles into a repetitious stylistic mode. This may invite accusations of unevenness, but the film fundamentally rejects that notion through its insistence that artistic exuberance can only result from a denial of symmetry and undulating consistency as a unifying principle. Gu’s timidity and disposition toward theoretical resolutions finds no purchase in this realm of hand-to-hand warfare, and it’s only when he uses his keen sensibilities, coupled with Yang’s more physical inclinations, that any meaningful effect can be reached. Thus, A Touch of Zen is, above all, about the necessity of a considered—and accomplished—process to realize any form of sustained societal change.

Gorgeous from first to last frame, there’s hardly a scratch on Criterion’s stunning 4K, Blu-ray transfer, which brings the full-throated beauty of King Hu’s masterwork back to life. Exterior shots are sublime, with fully saturated colors and depth of focus consistently maintained. There are no signs of digital enhancement or alteration, as a healthy level of grain remains present at all times. The only drawback to this is that there are a few scenes that feature dark marks near the top or bottom of the frame, but the image quality otherwise remains so hypnotic that it’s hard to quibble. The monaural soundtrack sounds dense and well mixed, with dialogue, music, and clangs all resounding with force and clarity.

Criterion has given this disc a full plate of supplements, gathering biographical materials about director King Hu, interviews with the cast, and critical appraisals of the film. A feature-length documentary about the filmmaker is conventional in its composition, mixing commentary with clips from his oeuvre, but efficient and concise in dealing with both anecdotes about his life and production notes from various films. An interview with actress Hsu Feng reveals how she came to be a part of the film after playing a small role in Hu’s Dragon Inn, while a chat with Shih Chun details how he reluctantly became an actor for Hu, despite little prior experience. Director Ang Lee provides an insightful interview on Hu’s importance to his own work, including Crouching Tiger, Hidden Dragon. Film scholar Tony Rayns gives a thorough talk about the film’s style and formal composition, which allows him to examine several different scenes at length. Finally, there’s a trailer, an excellent essay by David Bordwell, and notes on the film by Hu that accompanied the film’s 1975 showing at the Cannes Film Festival.

It’s hard to imagine many films being more suited for the Blu-ray format than A Touch of Zen, King Hu’s sensual wuxia epic, which finally makes its way onto high definition courtesy of the Criterion Collection.