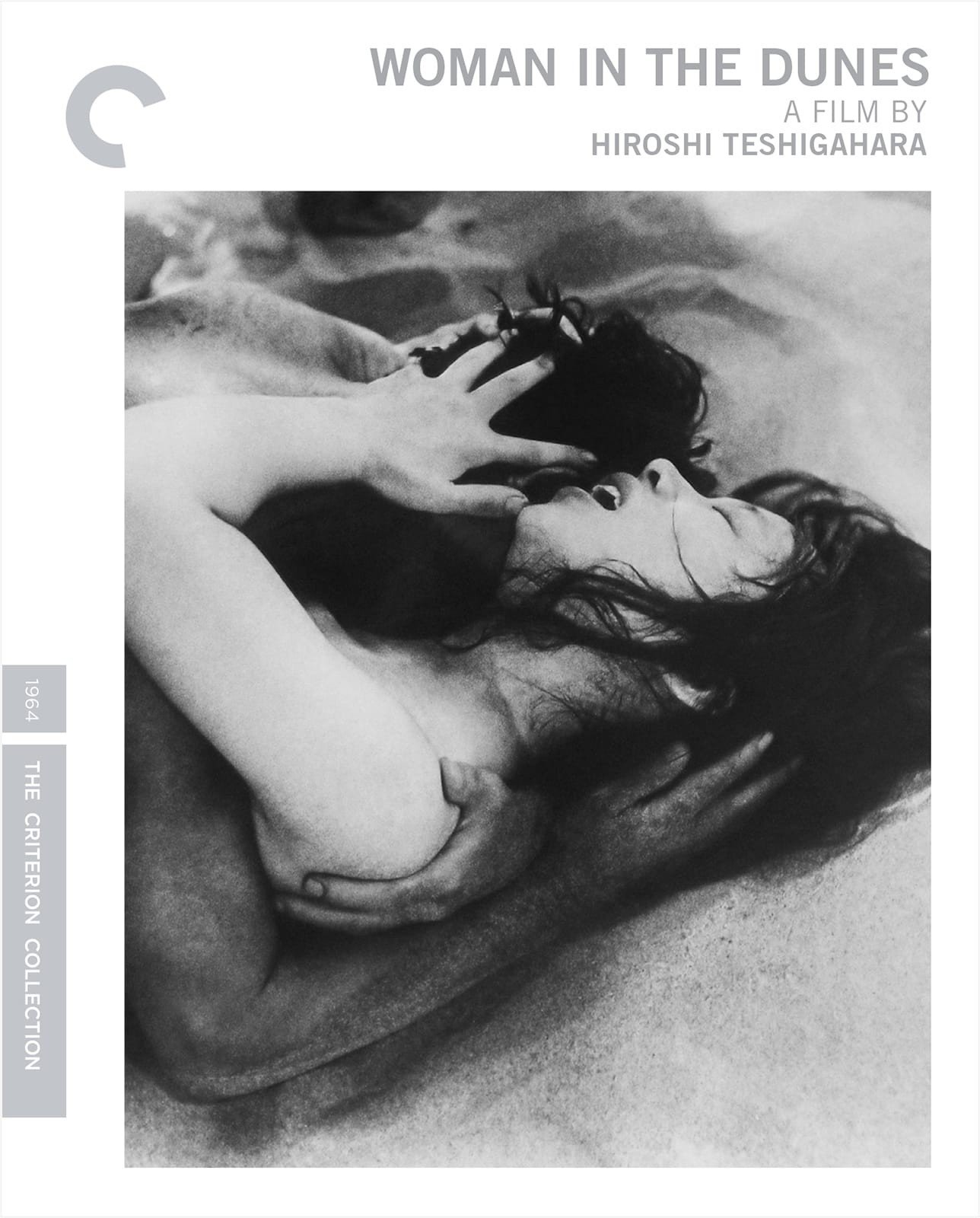 Although its protagonist comes to understand avalanches of falling sand as his primary obstacle for survival, Woman in the Dunes presents the ominous echoes of a bustling city street as its initial source of trauma. In fact, since director Hiroshi Teshigahara never reveals this city as part of an actual, tangible place, the sounds made by whizzing cars and honking horns may as well be abstract noise within Teshigahara’s nightmare tale of a Tokyo-based teacher (Eiji Okada) whose intended brief retreat into the sand dunes of a nearby village damns him to an inescapable prison. He’s in pursuit of insects, hoping to find one rare enough to “get my name in a field guide,” as he tells the deceitful woman (Kyôko Kishida) who’s agreed to put him up for the night. The film’s commencing tumult finds its bizarro inverse here, where the wind’s howl is the only constant hum (or is it a scream?) to be heard.

Teshigahara is less interested in exploring the emergent dynamics between the pair in what is essentially a narrative two-hander than he is in using his camera to suggest himself as an eccentric ethnographer of surfaces: sand grains, human flesh, the minutia that distinguishes one beetle from another. Maybe that’s why his characters are refused names; to name something, the film implies, is to really know it and be able to prove it possesses the characteristics of a particular, previously established thing. Thus, Tokyo is referenced by the woman as “a fun place,” but she knows nothing of it, having never left her underground abode. She only has a perception of the city, likely generated from other city folk she’s held captive. And, likewise, the teacher feigns knowledge of the village and idealizes it as tranquil and pure. When the woman makes a meal, he enthuses to her that “nothing beats local delicacies.” Each character fetishizes difference, and Teshigahara would seemingly be after outright critiques of such behaviors were every frame of the film not an equal admission of his own guilty fetishism.

Woman in the Dunes seems to spring directly from the mind of its maker, where each second coherers around a unique directorial presence. In the film’s most sensual sequence, Teshigahara’s camera lingers in extreme close-up on the woman’s neck as she eats a bowl of rice. The moment is simultaneously abstract and pornographic, providing a microscopic examination of a portion of her body instead of explicating on the character’s psychological disposition. It seems to parallel previous close-ups of the teacher’s insects and, before that, a shot of a caterpillar being lost in the sand’s intricacies. Teshigahara’s camera asks whether any of its subjects are human beings, creatures, or objects and, accordingly, how cinema can seek to understand such underlying philosophical questions of being.

Even so, Woman in the Dunes isn’t an essay film or an ideological treatise, but a labyrinthine work of jet-black humor, which is anchored by the arrogant presumptions of the teacher. He understands his license to collect, as it were, as inalienable because of his status as an “important” intellectual. When told he’ll have to take a rope ladder into his eventual pit of doom, he announces it as “a fun adventure.” Yet, when asked to wash his face with the woman’s only available bucket of water, he bemoans the water’s tepid state. Teshigahara suggests that cosmopolitan desires, and perceptions of oneself as culturally adventurous, reinforce only the sojourner’s self-aggrandizing sense of power. Moreover, the teacher consistently sees his experience as part of a greater narrative for his own emotional growth; even after he’s been imprisoned for weeks, he reassures himself that, after he’s made it home, this ordeal will actually have been good for him. The moment is perhaps Teshigahara’s greatest feat of irony: The teacher will need to meet actual death before being capable of relinquishing his sense of privilege and superiority.

After all, getting “home” for the teacher only means returning to some semblance of control. It’s as if he conceives of his travels as a simulator, bestowing upon him wisdom that he can take with him on his next ride, but with little understanding of the places and dynamics that inform his nomadic aspirations. “I only have three days. I have to make them count,” he tells the woman while eating her food and using her dwelling space. Yet while the teacher’s hubris helps explain his eventual doom, it’s Teshigahara’s haunted depiction of perpetual entrapment, whether through actual kidnapping or the delusions of one’s own invincibility, that proves most asphyxiating.

Considering this is a standalone Blu-ray release instead of an upgrade for the entire Three Films of Hiroshi Teshigahara DVD set released in 2007 by Criterion, one might have hoped for a 4K, or at least 2K, scan of Woman in the Dunes’s original negative. Alas, this is only a high-definition digital transfer, which hasn’t been completed with the newest technologies. That turns out to be a minor complaint, however, since the transfer is largely free of noticeable defect or tampering, even if the image at times wants for greater sharpness and detail, especially in wide shots of the vast landscape. Close-ups are immaculate, though, and it’s only in shots where the depth of field is immense that the lack of resolution is most evident. The monaural soundtrack is clean, crisp, and efficiently mixes dialogue and music without any evident flaws.

Identical to their previous DVD release (which is now out of print), Criterion provides a handful of extras that, while relatively short in length, boast great depth through their insight and diversity. James Quant’s video essay is especially illuminating as a close reading of the film’s spaces and use of sound, while also filling in some helpful production and creative contexts. A half-hour documentary spreads the wealth to a number of prominent film scholars, including Donald Ritchie and Tadao Sato, who explain the working relationship between Teshigahara and novelist Kobo Abe. Enthusiasts and scholars alike will find four of Teshigahara’s short films of interest; Tokyo 1958 is especially unique for being a collaboration between Teshigahara and eight other filmmakers in its examination of various places and businesses throughout Tokyo when it’s eight-and-a-half million occupants made it the largest city in the world. Finally, a booklet contains essays by film scholar Audie Bock and a brief interview from 1978 with Teshigahara.

Woman in the Dunes, one of the most heralded films of the Japanese New Wave, is back in print on a solid new Blu-ray from the Criterion Collection.

Blu-ray Review: Tony Richardson’s A Taste of Honey on the Criterion Collection