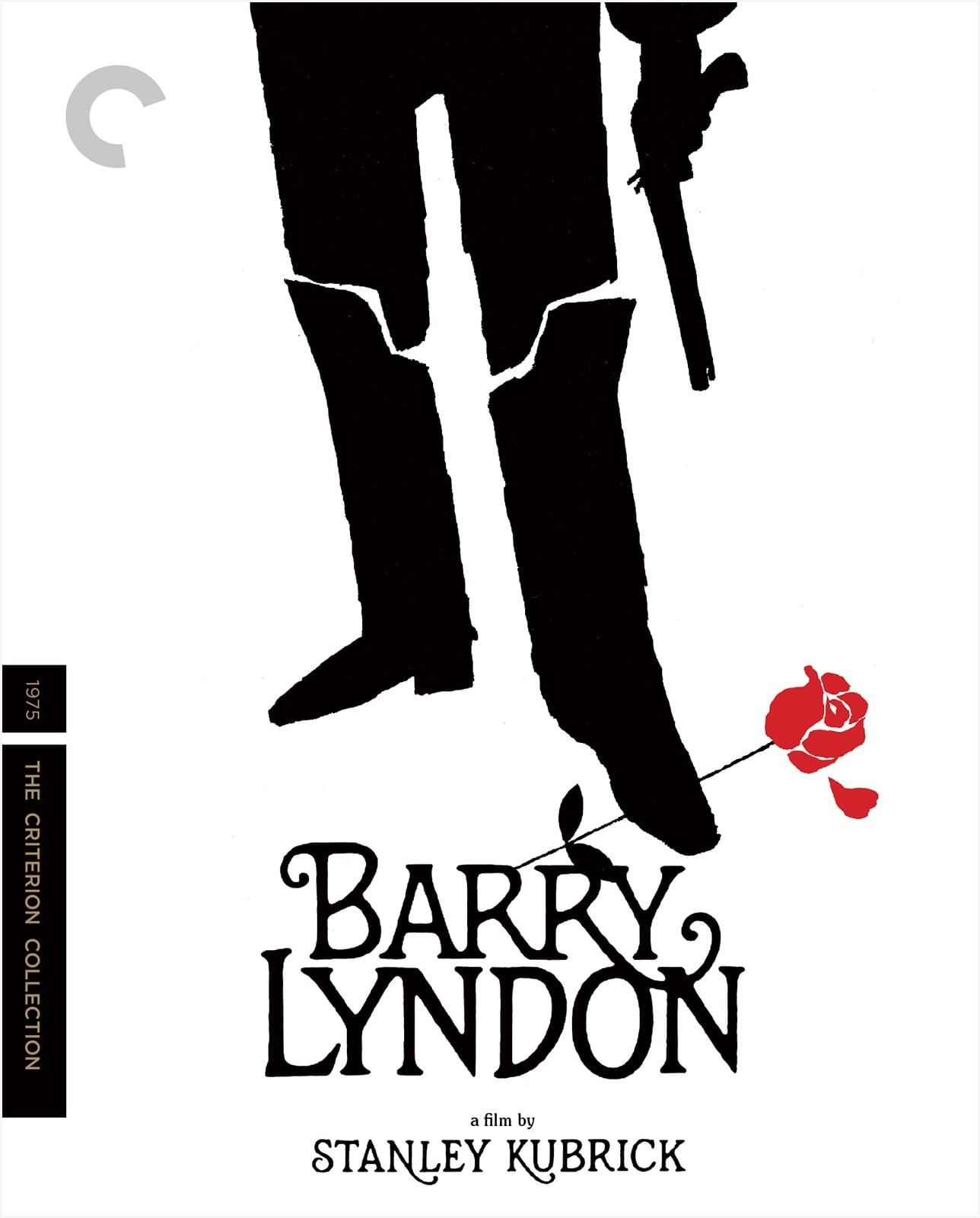 In the “hot takes” section of the 2002 Village Voice film critics poll, Jim Ridley stated of George Lucas’s Star Wars: Episode II – Attack of the Clones, “with its vast model-train environments that swarm with massed pixels, I couldn’t wait for the next establishing shot—something I don’t think I’ve done since Barry Lyndon.” I mention that perhaps hyperbolic testament less as a confirmation of the enlarged reputation of Stanley Kubrick’s 1975 costume drama and more of a quick means of demystifying a film that to this day feels singularly impenetrable, even alongside the likes of 2001: A Space Odyssey and Eyes Wide Shut. Received with condescension or maybe toleration upon its release, Barry Lyndon has seen its reputation boast a trajectory that matches that of its central figure, the caddish Redmond Barry (Ryan O’Neal). The film climbed the ranks from being the stubborn black sheep in the director’s name-brand filmography (everything from Dr. Strangelove on, more or less) to being the film everyone now claims was their secret favorite all along. In the last two editions of Sight & Sound’s venerable film critics’ poll, in 2002 and then again in 2012, Barry Lyndon placed second among Kubrick’s films only to 2001.

And yet it remains an outlier among his works, no matter how warmly it may be welcomed today. Martin Scorsese, speaking on Barry Lyndon’s behalf in Jan Harlan’s 2007 documentary Stanley Kubrick: A Life in Picture, placed the film in a futuristic context, claiming that Kubrick may as well have brought modern technology with him into a time machine destined for two centuries prior. That progressive-retrospective combination—Kubrick again pushing the medium to a new state of the art, gazing upon the human behaviors of a bygone era with a quizzical eye—suggests but doesn’t explain what Barry Lyndon almost alone among films has to offer. With some of the leftover enthusiasm he had dedicated to the ill-fated Napoleon project, Kubrick’s film patiently but playfully adapts William Makepeace Thackeray’s novel The Luck of Barry Lyndon as a rake’s progress tale writ on the largest of scales. If not a to-the-letter comedy, then it’s at least a comedy of errors.

Barry’s story begins by painting him as a victim of circumstance, the son of a man killed in a duel over horses in the first of the film’s many impeccably framed exterior shots. Aided by a narrator (Michael Hodern) who provides the “account of the misfortunes and disasters which befall Barry Lyndon” in a tone pitched just shy of outright mockery, it quickly becomes apparent that these establishing tableaux aren’t merely scenic placeholders—though through the efforts of D.P. John Alcott and special lenses developed, in part, by NASA scientists, that would have easily been function enough.

Barry’s progression from the Irish countryside to the upper ranks of 18th-century British social circles (and then back again) is repeatedly punctuated by scenes of unparalleled beauty. Many detractors have accused Kubrick, in Barry Lyndon, of burying the human spark underneath production design, of smacking the audience with one wet towel of stylized artifice after another. But these picturesque images serve a very explicit function, first underpinning Barry’s social climbing by manifesting his aspirations in stark cinematic form. Then, as the “must come down” portion of Kubrick’s patient drama begins to kick into high gear, the well-groomed backdrops begin taking shape as a representation of the natural order of things. Barry’s interloping customs provide him a seat at the table, but forces greater than he form the environment that won’t tolerate his shenanigans in the long term.

It isn’t vulgar to suggest that Kubrick may have identified with the autodidact Barry, who so cunningly orchestrates his own destiny with the same improvisational brio as a director routinely embracing new technologies with every film. (Aside from the special lenses he used here to gorgeously capture natural light right down to the flickers of candles, he utilized new joystick technology to perfect A Clockwork Orange’s zooms, and practically reinvented the language of cinematic mobility with his Steadicam in The Shining.) Kubrick’s reputation as a staunch perfectionist could scarcely have been more well-earned than it was here, or more well-matched to the material.

Furthermore, Kubrick’s flair for bringing to the art form a supreme dilettante’s breadth of knowledge reached some kind of apotheosis here, so that no single detail can be regarded as anything other than the result of excruciating consideration on the director’s part. Barry Lyndon’s harshest critics do have one thing on the nose: It’s as unforgivingly labored a masterpiece as you’re apt to experience. That’s not in terms of the delivery of its story, which is actually densely plotty for post-2001 Kubrick. But the weight of each choice can be perceived consciously or subconsciously.

Just to name one example, the film’s musical leitmotif, Handel’s “Sarabande,” is itself a tonal reflection of the rising-falling experience of Barry’s precarious fortunes; in contrast, the theme accompanying the romantic imprint his cousin Nora Brady (Gay Hamilton) leaves on his psyche is Seán Ó Riada’s “Women of Ireland,” a lilting Irish ditty that, held against the plodding Handel piece, only soars on the musical staff. The side effect of Kubrick’s total command of the medium may be that it momentarily knocks viewers out of the storyline or distracts them from the characters’ internalized struggles. But then again, isn’t the distance between what people perceive and the reality of what they’re really confronting Barry Lyndon’s chief concern in the first place?

Really, for fans of Barry Lyndon, the only thing that matters in the entire history of home video is that Criterion’s presentation of the most visually stunning film ever committed to celluloid is also among the most jaw-dropping transfers ever encoded onto Blu-ray. In short, it is. Of course, the famed candle-lit card games are impressive showpieces, with an astonishing luminosity amid inky darks. But even more impressive are the exteriors, where the shadows of clouds slicing across the countryside are flawlessly represented. There isn’t a shot from this 4K scan that doesn’t sing in some way or another, be it the pallid visage of Lady Lyndon as her insular suitor begins his downward spiral, or the play of light through the window slits in the final duel sequence. The 1.66:1 aspect ratio is observed, unlike Warner Home Video’s previous, otherwise well-above-average Blu-ray release, which masked down to 1.78:1. But credit Warner Bros. where it’s due. Likely knowing that the Stanley Kubrick films were among their most precious assets, the camera negative from which this scan was sourced is almost wholly blemish-free. Another wrong righted here from the old Blu-ray: The soundtrack is once again available in its original monaural form, uncompressed to boot. Not that the 5.1 surround remix (also preserved here) was anything other than tasteful.

Normally, I dock a point any time a Criterion set doesn’t include a commentary track, but it seems clear here that a conscious decision was made to ensure the disc containing the main feature had as little else on it as possible, to devote every available byte to presenting the film’s images alone. Ergo, a pass. There’s more than enough “commentary” on the film from the second disc’s trove of documentaries, featurettes, and interview segments. Kubrick fanatics will probably be the most gladdened at the participation of critic and Kubrick: The Definitive Edition author Michel Ciment, who goes full-tilt film studies in his 20-minute conversation, picking Barry Lyndon apart like a mechanic dismantling an engine to show how it works, and its place of importance within the director’s body of work.

One wishes that Leon Vitali (who played the pugnacious Lord Bullington in the film en route to becoming Kubrick’s personal assistant) had been given as much if not more time in his interview segment; he mostly discusses the engineering behind the alternate 5.1 sound remix. Thankfully, he does also factor into the “Making Barry Lyndon” documentary, which at a svelte 40 minutes limits its focus predominately to the production history and Kubrick’s increasing turn toward meticulousness. The all-important subject of lenses gets not only a featurette, but two reprinted articles from a 1976 issue of American Cinematographer, in a booklet that also includes an introductory essay by Library of America editor Geoffrey O’Brien. Editing, costumes, production design, and the film’s eye toward art history all get their moment in the limelight amid the second disc’s offerings. So, despite the lack of a commentary track, it’s tough to imagine anyone finding Criterion’s set lacking.

Kubrick’s Barry Lyndon has been getting impressionable young cinephiles to confuse the terms “picaresque” with “picturesque” for four decades now, and Criterion’s sparkling Blu-ray ensures the tradition will continue.