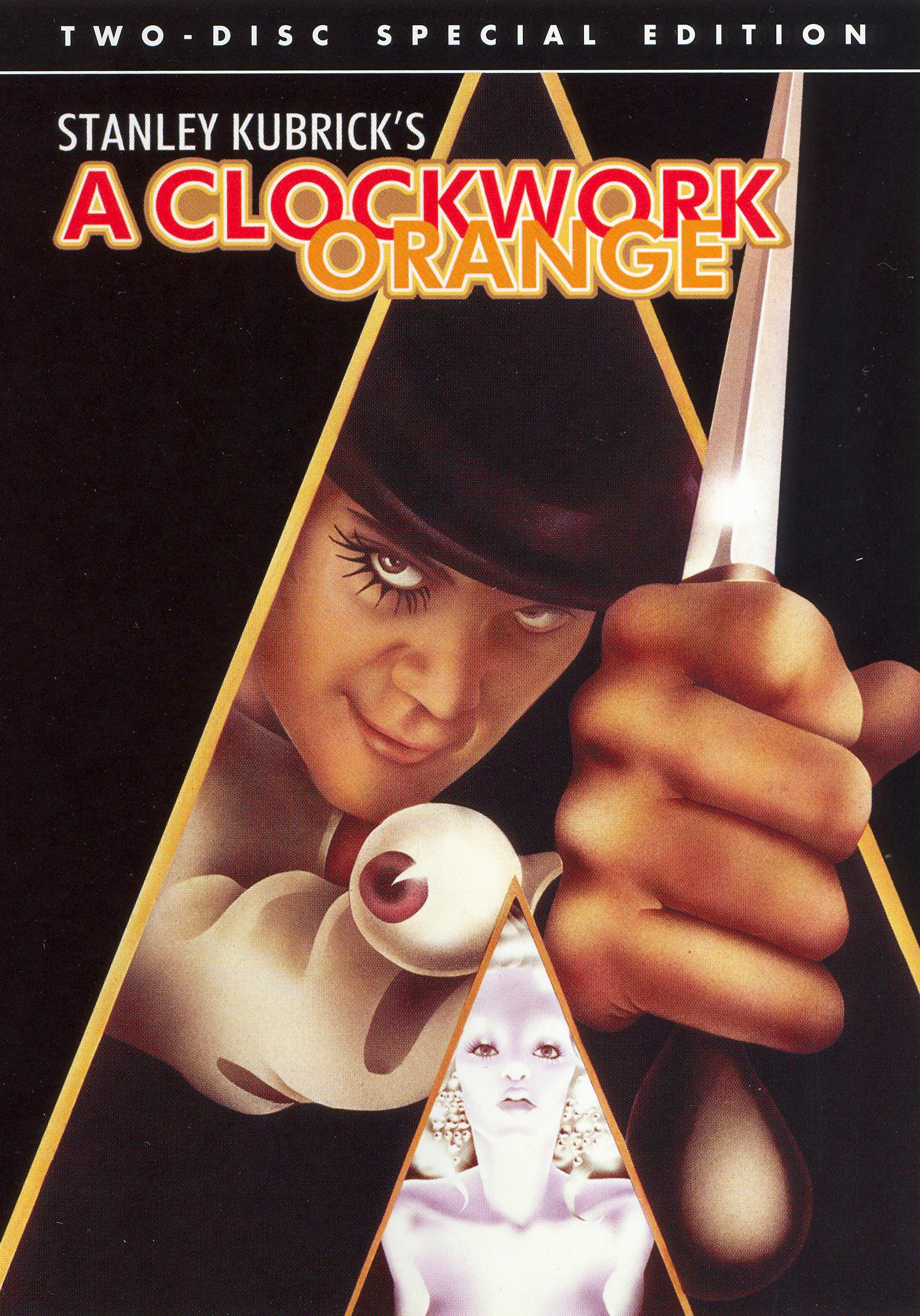 One of the great criticisms heaped against A Clockwork Orange is that Stanley Kubrick glorifies a certain kind of amoral violence, presenting it to the viewer in a spectacular, operatic, colorful, and exquisitely photographed manner. Malcolm McDowell, at the top of his game as Alex the thug, gleefully narrates his way through the ultra-violence his character commits in the first third of the movie. A particularly obscene atrocity is when he and his gang of droogs rape a woman and brutalize her husband while gallivanting about the house singing “Singin’ in the Rain.” Alex throws himself into the act with giddy exuberance, but does anyone honestly believe that we’re meant to laugh along with Alex’s joie de vivre as he behaves like a savage?

Certainly, no punches are pulled in this queasy home invasion sequence. The thugs wear creepy Halloween masks and, in their white suits with elaborate codpieces and bowler hats, are positively grotesque. But before we see Alex unleash his dark side, our first glimpse of him—in the opening shot of the movie—has him looking straight into the camera, toasting the audience with a glass of milk at the Korova Milk Bar. He’s seen as handsome, charismatic, and while he’s completely unaware of the vast discrepancy between his buoyant narration and his workaday acts of thievery, brutality, and deviancy (speaking directly to the audience as if he were the young hero of a Charles Dickens novel, even referring to himself as “your humble narrator”), he casts a spell over the viewer as if to say, “Come along with me, little ones.” He is, in effect, inviting us to enjoy, as we do when we tune in to reality television shows and tabloid newspapers, watching debasement as entertainment. It’s a nasty recognition of the distance one has as a spectator, laughing at another’s expense. If you watch Clockwork Orange and see that this is the game Kubrick is playing with us, giving us an avenue into understanding a corrosion of society, the film may be appreciated as his finest masterwork in a career full of them. Certainly, it’s his most human film, right next to Lolita in its refusal to judge its central character’s sickness. That’s the job of the audience. Anyone who doesn’t feel up to that job might throw up their hands and accuse Kubrick of being immoral, when in fact the sense of being a morality play is hard-wired right into the structure of Clockwork Orange.

The scope of Clockwork Orange becomes wider when Alex is betrayed by his gang and captured by the authorities. Police and government officials, bullies all, begin to operate at a status level that’s higher than young Alex’s. The middle section of the film moves from individual acts of violence to more institutionalized violence. When he arrives in prison, his belongings and clothes are categorized as he is stripped of everything, and a police guard (the inimitable Michael Bates) shouts in his face a tirade of insults interwoven with threats if Alex doesn’t behave properly. Quickly learning how he should pretend to behave, Alex immediately goes about working the system and, in order to get out of jail early, takes part in an experimental brainwashing procedure. He’s made to watch films depicting violence while his eyes are pried open with wires and injected with drugs, which induce sickness and dry heaving at the very sight of sex and violence.

Alex watches movies that depict acts of carnage in the spirit of the crimes he reveled in earlier, which may or may not have nauseated viewers of Clockwork Orange. If the violence portrayed earlier in the film is enjoyed, it’s perhaps because one gets a kick out of the theatricality of Alex’s behavior in the early going and the high art of Kubrick’s pictures—each image a glorious painting, an elaborate tracking shot, or some other cinematic convention specifically created to inspire awe in the spectator. And now Alex is supposed to be getting a taste of his own medicine, and the viewer is perhaps circumspect. If there’s a nagging sense of discomfort, it’s because Alex is not being taught that these acts of violence are wrong; he’s being brainwashed to have a physical aversion to that violence and the ability to choose between right and wrong has nothing to do with it.

The authority figures are as bad, if not worse, than Alex. And unlike the way Alex is depicted in the film (handsome, funny, charismatic, and charming) they’re mostly a gallery of grotesques. Even the prison chaplain (Godfrey Quigley), who is the sole voice of dissent saying that Alex has been stripped of his freedom of moral choice, is shown as a blustering, pontificating boob. When Alex is released into the world, his cure has rendered him incapable of defending himself against the vultures and scourges that are more than happy to avenge themselves upon him for his past crimes. This would all be intolerable if it weren’t handled with the aforementioned sense of Kubrick’s irony and pitch-black satirical comedy.

One of the finest performances in Clockwork Orange is by larger-than-life Patrick Magee as the wheelchair-bound subversive writer who captures Alex near the end of the film (he was the victim of Alex’s infamous “Singin’ in the Rain” beating, and his wife died one month after being raped). There’s a painfully funny scene where he has drugged Alex’s glass of wine and tries to goad him into drinking it, and as Alex does his best to play along, smilingly nodding his head and acknowledging the kindness of his captor, the writer speaks each of his lines of dialogue as if wincing through a diamond-splinter headache. “DO TRY THE WINE!” he says through fiendishly clenched teeth. Even the polite conventions of dinner conversation become an excuse for thinly repressed violence, and it’s played with the timing of a Joe Orton comedy.

Clockwork Orange can’t be classified as one of those “angry young man” films that were so prevalent in British cinema during the late 1960s and early 1970s where the audience clearly was meant to identify with the hero and be inspired to shake up the system (though it invites the comparison because McDowell starred as the young rebel Mick Travis in Lindsey Anderson’s O Lucky Man and If…). Clockwork Orange shares with those pictures a certain kind of irreverence and lack of respect for authority figures. But the anarchic qualities of the film are less kitchen sink realism and political ideology than its taste for the ridiculous. Here’s how: Kubrick’s lenses are wide and slightly distorted; many of the costumes and sets are painted in vivid, eye-catching primal colors; and half the dialogue is done in a slang mixture of Slavic, Cockney, and Russian. It’s all as delightful as reading Alice in Wonderland, and the aesthetic provides a necessary distancing device between the spectator and the acts of horror depicted throughout. And that distance isn’t meant to shunt off the moral questions of the film, but to keep us engaged and, hopefully, contemplative about our own sense of morality.

If there’s an inherent problem in Clockwork Orange, it’s that Alex’s cruelty is depicted with such bravura cinematic technique and such harsh irony that there’s a whole audience that tunes in just for the shock and awe. But I don’t hold that against Kubrick’s film, which in fact is about uninspired moral negligence, and about its hero tuning into violence as entertainment and institutions using violence and brainwashing as a means of control. It’s Kubrick’s most prescient work, more astute and unsparing than any of his other films (and he had more where that came from) in putting the bleakest parts of human behavior under the microscope and laughing in disgust. It was made right after his other high watermark, 2001: A Space Odyssey, and as he returns to Earth from his mind-blowing brush with the cosmic, it’s a sort of sequel about our planet rotting away from the inside. As a drunk says to Alex right before taking a vicious beating: “I don’t want to live anyway! Not in a stinking world like this! Men on the moon and men spinning around the earth, and no attention paid to earthly law and order no more!” One could say this was ripped straight from the headlines, only nowadays one could argue there’s no attention paid to anything, be it outer space or earthly matters, just an endless feeding to audiences who have developed a voracious taste for, as Alex would say, “the [good] old ultra-violence.”

With its bright color palette, fisheye lens wide angle compositions, and occasional use of harsh white lights, image quality is of particular importance to A Clockwork Orange and the DVD transfer doesn’t disappoint. In the balancing act between Alex’s narration, spoken dialogue, and the frequent use of classical music, there are a few scenes where the music overwhelms the spoken word, but otherwise it’s a harmonious mix.

Malcolm McDowell’s commentary track is a nonstop delight, and his memories of Stanley Kubrick are vivid, highly complementary, and occasionally irreverent. He has a nice foil in film historian Nick Redman, who is a good sport when McDowell makes fun of his obsessive fact-checking. There’s also a fun 90-minute talking-head documentary with McDowell which includes clips from many of his career highs (his films with Lindsey Anderson and Kubrick) and lows (Caligula, of course), mostly made enjoyable because of McDowell’s virtuoso skill as a self-deprecating raconteur. The featurette “Great Bolshi Yarblockos! Making A Clockwork Orange” has very little to do with the film’s making-of. In fact, it’s pretty interchangeable with the accompanying, equally unexceptional documentary “Still Ticking: The Return of A Clockwork Orange.” Both feature clips from the film intercut with interviews with film historians, filmmakers (William Friedkin, Mary Harron), and provocative celebrities (artist Damien Hirst) as fans and armchair philosophers sharing their responses to the film and memories of the film’s initial release.

The fiercely ironic A Clockwork Orange has held up over time as a provocative comic horror show.