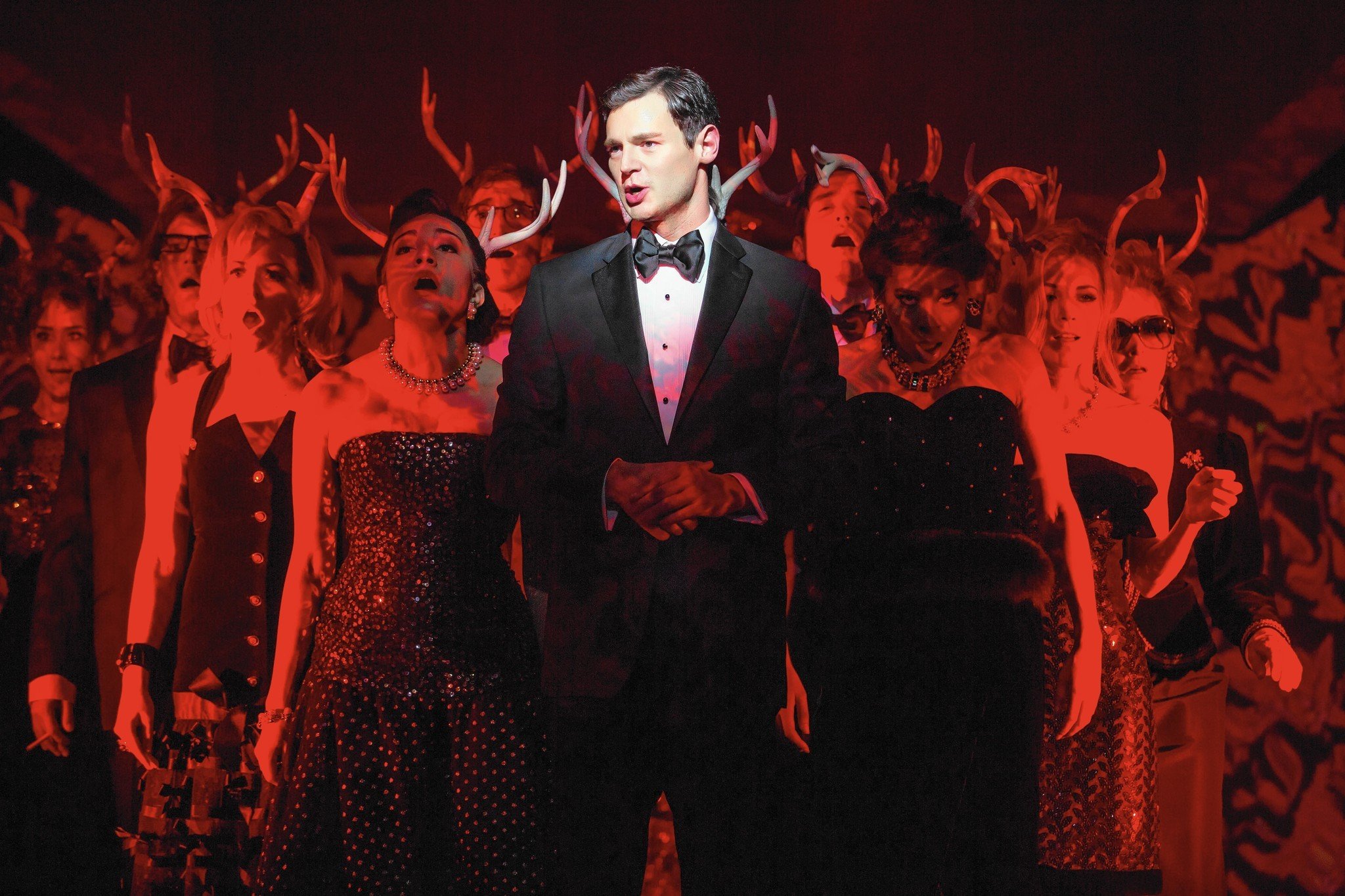 It’s hard to tell if the American Psycho musical knows that it sounds like a joke straight out of The Simpsons—or whether it matters. Imagine Homer Simpson and his family on a trip to Capital City, and Marge announces that there’s a musical based on Bret Easton Ellis’s novel. The kicker: Duncan Sheik wrote the music. But this is no joke, despite the copious jokes. It’s real life, and we’re stuck with what to make of this ludicrous crowd-pleaser.

I’m reminded of another absurd musical adaptation of another quintessential novel of ‘80s New York depravity: Paul Scott Goodman’s Patrick Wilson-starring Bright Lights, Big City, from 1999, which took its odd subject for musical theater and ran with it so far past its farcical extremes that it came out the other side. The hero of Jay McInerney’s novel had a fixation on a comatose child, and Goodman gave “Coma Baby” its own song, which is revisited throughout; he did the same for a missing NYU student on a milk carton. The downtown cokeheads at the Odeon repeat the line “Can you make me cum?” until it sounds like catchy nonsense a la “da doo ron ron.”

The first time I heard Bright Lights I thought it was a spectacular failure, but the more I revisited the cast recording, the more I realized it might actually be closer to bad-taste brilliant—colorful, kitschy, ambitious, and admirably outlandish, both in tone and by the fact of its very existence. And that’s how I felt by the end of the American Psycho musical. You may remember the scene from Ellis’s novel—or Mary Harron’s 2000 movie—in which Patrick Bateman obsesses over the quality of his and his peers’ business cards. Here, it’s a septet, with Matrix-y boy-band choreography (by Lynne Page), and this refrain: “Oh baby baby, you’re such a card/You make it look so easy, when I know it’s fucking hard.” The show has a singing role for an ATM.

Like everyone else, the ATM sings Sheik’s score: mellow ‘90s-folk chord changes produced for pop radio. It’s instantly forgettable, though it moves the plot along and develops the characters. Perhaps to compensate, there are also a few popular songs of the era, Bateman’s favorites, such as “In the Air Tonight,” arranged for a small female chorus. “Hip to Be Square” ends act one, and it’s so rollicking and appropriate that I wondered if the show would’ve been more effective—and subversive—as a Huey Lewis & the News jukebox musical. Instead of a sensitive Sheik ballad for Patrick’s secretary, in which she wonders if there’s a nice guy under there she could save, she could have sung “If This Is It,” slowed down for maximum gravitas.

The American Psycho musical indulges in a lot of that kind of I Love the ‘80s namedropping, including a few too many relevance-desperate references to Donald Trump, so it’s a comedy, and the audience ate it up. Before the novel was even published, people were fired up about it: There was so much outrage about leaked excerpts and those printed in magazines that Random House abandoned it weeks before it was set to hit stores (and let Ellis keep the advance); its paperback division, Vintage, picked it up, and the National Organization of Women organized a boycott, with the support of Gloria Steinem. “The book is…in effect, a how-to novel on the torture and dismemberment of women,” a NOW organizer told callers to a hotline. Sitting in the Schoenfeld Theatre, next to a man ironically air-drumming during the Phil Collins song and a woman guffawing at Patrick’s description of a man and his dog as “faggy,” all that controversy seemed so passé!

Without the cultural context, all that remains are the artifacts. Rupert Goold’s production is busy like a Midtown street at lunchtime; there’s always a gag on the fringes to look at, if you can pull your eyes away from the star, Benjamin Walker. The inventively transformative set uses a few turntables to go from office to park to taxi to apartment to club without a pause, creating an abstract New York City of nonstop action and interchangeable space; it’s usually monochrome, painted in 50 shades of gray, from bone to black, and includes floor-to-ceiling walls of hand-labeled videocassettes. Bateman’s apartment is sparsely furnished, but only with the finest things; the 30-inch television has picture-in-picture. There are so many vertical lines that they start to blur, like a desertscape at midday, and to disorient you further in this fantastical past, there’re flashing lights and smoke machines.

But you won’t get lost. Walker, a rising star, grounds this American Psycho. He has the stereotypical attributes—deep voice, handsome face—of an American president, a role he’s played twice, though always unconventionally: an Andrew Jackson who sings emo, an Abe Lincoln who hunts vampires. There’s something a little weird about his all-American ideal, something that evokes the gangly, nerdy handsomeness of Anthony Perkins (“Bates,” after all, is the root of “Bateman”); plus they both look smart with a butcher knife. Walker has a fury that comes out easily and eerily strong, which helps him be the ideal Bateman, that apotheosis of Reagan-era Wall Street culture: a privileged, sociopathic serial killer, obsessed with surfaces and status symbols—beautiful on the outside, nasty on the in.

But, unlike in Ellis’s novel, this Patrick doesn’t start out crazy. In the book by Roberto Aguirre-Sacasa (the guy who was brought in to “save” Spider-Man: Turn Off the Dark), Bateman is pushed into insanity by the moral vacuity of his time (and his existing emotional problems)—a victim of his circumstances rather than a representation of them. He grows into the part of American Psycho. So something funny happens as the musical nears its end: Aguirre-Sacasa suggests Bateman might be set straight by the love of a good woman—Jean, his secretary, played by Jennifer Damiano, also from Spider-Man—who has a darker and more emotional tone than her cast mates; she sounded like the show’s only real singer, in contrast to someone like Walker, who just sings well. (Bateman’s girlfriend, the brash and naggy Evelyn, is played by the funny and clean-voiced Heléne York, who’s perfect in this “Miss Adelaide” role.)

As such, this American Psycho becomes a stodgily moralistic American Psycho, with pop-music flash and old-fashioned attitudes about love; the finale is a finger-wagging ballad about late capitalism. I was so stunned by how many fucks it didn’t give that I stopped wondering if I was laughing with it or at it and wondered if my laughter transcended it; was I laughing instead about art and America and everything that’s ever happened and everything that is? Jean sings about Patrick—the mad, murderous, malevolent Patrick Bateman: “Am I someone he could linger on?/Or would he just move along?/Am I someone he would love more?/Would I be just the girl before?” She’s just on the other side of the fine line that separates her from Troy McClure, singing, “You’ve finally made a monkey out of me—I love you, Dr. Zaius!”

American Psycho is now playing at the Gerald Schoenfeld Theatre.

The Longest Day: Long Day’s Journey into Night at the Roundabout Theatre

An Archeologist on a Musical Dig: George C. Wolfe on Shuffle Along