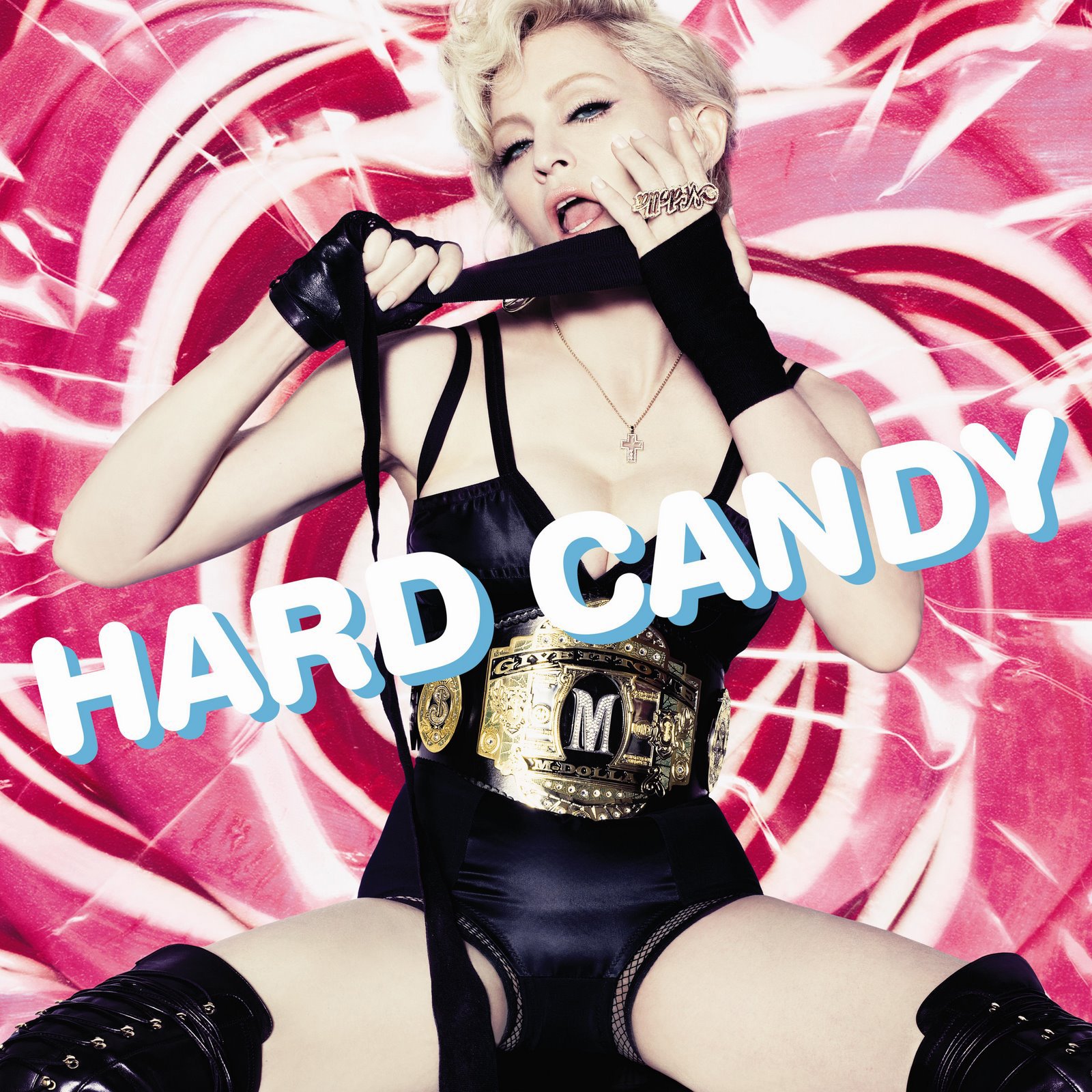 When an early version of “Candy Shop” leaked last summer, Madonna deserved the benefit of the doubt, as every artist does when it comes to unreleased demos, particularly in the Internet age, when fans can gain access to failed experiments that should have never left the confines of a recording studio. But the inclusion of this virtually unchanged track, which is as catchy as a stomach virus and just as vile, on the singer’s new album, Hard Candy, and the fact that Madonna reportedly wanted the song to be its first single, seemed to point to her seriously faltering instincts as not only an arbiter of what’s hip but of good taste in general. Comparing oral sex to fine dining on 1992’s “Where Life Begins” seemed daring, chic, and witty, but here she likens her clitoris to the front door of a confectionary and she wants us to know her sugar is “sticky and sweet”—all set to Pharrell’s tired paint-can beats. The song is neither sexy nor campy, and somewhere, Dita is throwing her head back, laughing hysterically, and cracking her whip in disapproval.

For all the criticism she received at the time, there was an authenticity to Madonna’s appropriation of black music and culture in the early ‘90s. House music and hip-hop were frequent bedfellows, and Erotica—with production work from Andre Betts and featuring, yes, Dita rapping without so much as a peep from the white rock press—is a testament to that. The notion that Madonna was somehow “selling out” with her next album, Bedtime Stories, was a dubious complaint considering she’s an artist whose first goal was to rule the world and whose second was to maintain that reign (it’s telling that the very first lyric of Hard Candy is “Say which flavor you like and I’ll have it for you”—such an accommodating hostess!). And in hindsight, Bedtime Stories wasn’t too far behind the curve; urban music, after all, was only just starting its own worldwide dominance in 1994.

If hip-hop seems like a put-on now, it’s because her Madgesty has fashioned herself into a lady of the manor in the British countryside, and instead of bedding Dennis Rodman, she’s making the bed for Guy Ritchie and three kids. Okay, so that might be a stretch, but she does fancy herself a domestic goddess. As with Bedtime Stories, though, the real issue isn’t that Madonna is once again making “black music,” but who she’s making it with. There are myriad hip-hop producers out there who could have helped Madonna achieve a more urban sound (U.K. bassline artist T2 was at one point a rumored collaborator) while at the same time giving the project an underground edge (something for which even Madonna’s biggest detractors would admit she has a knack), but she instead chose to hire two of the most ubiquitous hip-hop knob-twirlers—and I use that term figuratively, particularly for Timbaland—of the last decade.

The Neptunes-helmed “Candy Shop” is so disappointing, and Timbaland and Justin Timberlake’s “4 Minutes” such a blatant advertisement for the rest of the album, that it is with genuine surprise that I say that not only is the album palatable, but—and I apologize in advance for this and all subsequent but unavoidable candy metaphors—Pharrell delivers its tastiest morsels. “Beat Goes On,” the other track that leaked last year, has inexplicably lost its definite article but gained a Kanye guest spot and a flattering sonic facelift that transports it from 2001 to 1979. Disco (of both the purist late-‘70s and more covert early-‘80s electro varieties), it seems, provides Hard Candy with its juicy center while hip-hop merely serves as a crunchy shell. We caught a glimpse of the all-American, Detroit-reared, rebel spirit that made Ciccone a star at last month’s Rock and Roll Hall of Fame induction ceremony, and though her rise to fame in the Big Apple didn’t quite coincide with Studio 54’s heyday, she sounds at home among all the disco strings, toots, beeps, whistles, handclaps, and Chic guitar licks of tracks like “Beat” and “She’s Not Me.”

Pharrell makes his presence known a little too much, and the same kitchen-sink production approach that marred Gwen Stefani’s “Wind It Up” rears its overzealous head on “Incredible,” but he also manages to get Madonna to stretch vocally in ways she hasn’t since Evita. That is, when she’s not doing cheeky drag queen impersonations, with trannie-fierce moments sprinkled liberally throughout “Candy Shop” (“My sugar is raw”), “Heartbeat” (“See my booty get down”), and “Spanish Lesson” (“Work!”). One of those moments (“Get stupid, don’t stop it,” from second single “Give It 2 Me”) is, well, just plain stupid, but stupidity is one of the album’s main themes—and virtues. “Heartbeat” could have been sung by any number of anonymous female pop singers from the ‘80s…and that’s exactly the point. After 25 years in the business, Madonna knows she’s beyond informing the zeitgeist and she’s more than content to mine her influences—not to mention her own catalog, giving nods to “Into the Groove,” “Hung Up,” and her work with William Orbit—while at the same time borrowing a page from one of today’s biggest pop stars.

Madonna advises said pop star on the key to creative/sexual/calisthenic endurance on “Dance 2Night,” the second of two duets with Timberlake: “Are you a one-trick pony or do you want to keep runnin’ this race?” The entire album is a self-declaration of Madonna’s stamina, but it also reflects a woman who clearly feels like she’s in a furious battle against time. Her legacy is already assured, so scoring another U.S. hit is just icing on the cake but she acts like she doesn’t know it. With Pharrell providing the vintage party favors, Timbaland and Timberlake are the album’s insurance policy; “Miles Away,” “Devil Wouldn’t Recognize You,” and, of course, “4 Minutes,” bear the pair’s distinct, modern stamp, making Hard Candy more than just a throwback to Donna Summer, Anita Ward, and quaaludes.

In many ways, Hard Candy is the album Confessions on a Dance Floor was supposed to be, both in terms of musical style (despite the feathered hair and leotards, Confessions was more Eurotrash—and I use that term affectionately—than Eurodisco) and overall progression (French producer Mirwais’ use of Autotune—years before T-Pain, thankyouverymuch—and glitchy synths was European, to be sure, but his heavy beats and use of acoustic guitars was patently American, to say nothing of Madonna’s collaborations with Timbo cohort Missy Elliott, whose absence here hasn’t gone unnoticed). Madonna hasn’t delivered this many vapid floor fillers on one disc since her debut, and maybe not even then. Aside from a little careerism on the dance floor (“Give me a record and I’ll break it,” she dares on “Give It 2 Me”—okay, Mimi), there are few confessions here—nothing political, nothing too spiritual, no talk of fame, war, or the media. It’s just what America ordered.