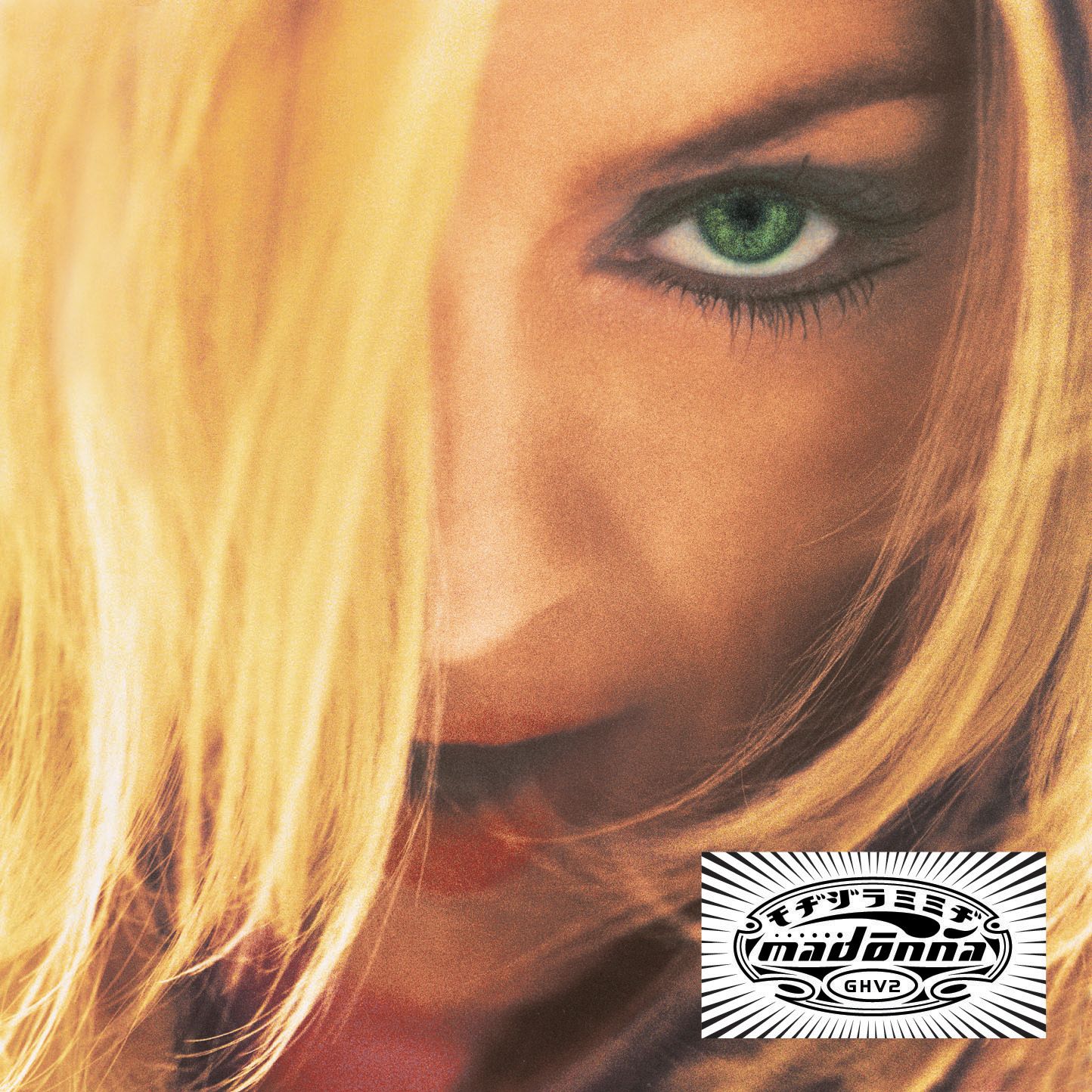 No new songs. No controversial videos. No remixes. GHV2 is a long way from Madonna’s previous greatest hits compilations. Even the album’s title, an abbreviation for “Greatest Hits Volume 2,” is comparably uninventive. The tracks here are as brutally edited as those on 1990’s The Immaculate Collection, the only other comprehensive hits collection in Madonna’s canon (1987’s You Can Dance was a continuous remix set and 1995’s Something to Remember focused on the singer’s more introspective ballads). Most criminal are butchered radio versions of “Frozen,” “Ray of Light,” and the now-classic “Deeper and Deeper.” Even “Human Nature,” Madonna’s defiant retort to critics who tried to “silence” her, has been ironically self-censored. And like all of its older, multi-platinum siblings, GHV2 doesn’t paint a complete picture; Something to Remember is the only place you’ll be able to find soundtrack gems “This Used to Be My Playground” and “I’ll Remember.” Also missing is the chart-topping remix of “Don’t Cry for Me Argentina,” which was completely re-recorded for clubs in 1997 by a then-pregnant Madonna and became the singer’s biggest dance hit in years; in its place is the original version from Evita, which stands out among the trendy pop of “Erotica” and “Bedtime Story.” With no new material and a seemingly hands-off approach from its star subject, the collection doesn’t seem to do justice to a career that has always been ahead of the game and focused on the future.

While it might be a somewhat fruitless purchase for Madonna fans who undoubtedly own Madonna’s last four studio albums, GHV2 certainly encapsulates the second decade of the performer’s boundary-bridging career. Choppy edits, random sequences and missing links aside, here’s how the songs themselves measure up:

Deeper and Deeper (1992). Deftly blending producer Shep Pettibone’s of-the-moment house beats with swirling keyboard synths and flamenco guitar, “Deeper and Deeper” is both a product of its time and a timeless Madonna classic in the “Vogue” vein. The track even invokes that famous chart-topper’s invitation to the dancefloor: “Let your body move to the music!” One of the few tracks from Erotica not weighed down or muddled by Pettibone’s gritty production, “Deeper and Deeper” sounds just as good today as it did nearly a decade ago. A-

Erotica (1992). Madonna was all dressed up like Dita Parlo for Halloween in 1992, unknowingly crossing the public’s anomalous line of decency with “Erotica” and the Sex book. While she was presumably aware that the lead single from her sixth studio album would challenge the pop music standard, she probably didn’t know that it would play a part in the biggest challenge of her career. A virtual sequel to the steely in-your-face spoken-word of “Justify My Love,” “Erotica” was as distantly icy as it was erotic: “Only the one that inflicts the pain can take it away.” Sadomasochism in the form of song, the track was a creative high for a career on the verge of public turmoil. B+

Human Nature (1994). “Oops, I didn’t know I couldn’t talk about sex/I musta been crazy.” And oops, she did it again. For years, Madonna spoke in metaphors, fantasies and blatant shock tactics, but with “Human Nature,” the performer indignantly struck back at her critics in a rather straight-forward manner: “I’m not your bitch/Don’t hang your shit on me.” She wasn’t just holding up a mirror, she became the mirror: “Did I say something true?…I didn’t know I couldn’t talk about you.” Madonna’s snide tone went a bit overboard, though, suggesting her opinions would have sounded better had she been a man. Different, sure. But better? Nah. B

Secret (1994). Madonna reemerged from the funk of Sex and David Letterman with “Secret,” perhaps the single most naked performance of the artist’s career. Acoustic guitars, expertly sweetened vocals and producer Dallas Austin’s signature R&B beats soulfully transport the listener into Madonna’s troubled yet balmy world. “Happiness lies in your own hand,” she sings. Regardless of whether or not she was able to apply the concept to her experience at the time is questionable, but it became her mantra, segueing nicely into her Yoga years. A

Don’t Cry for Me Argentina (1996). Easily one of Madonna’s greatest vocal performance to date, the singer’s dramatic interpretation of Evita’s unofficial theme song was both loyal and bizarrely autobiographical: “As for fortune and as for fame/I never invited them in/Though it seemed to the world they were all I desired.” Like a healing wand, her role as Eva Peron served as a glorious transition into adulthood (and motherhood). B+

Bedtime Story (1994). Perhaps the single with the most unfulfilled hit potential in Madonna’s 20-year career, the Björk-penned title track from 1994’s Bedtime Stories could have been the next “Vogue” (“Let’s get unconscious honey,” she sings hypnotically over a pulsating beat and gurgles courtesy of Nellee Hooper and Marius DeVries). Modern rock didn’t dare bite; even the bravest of pop radio programmers passed on the trippy follow-up to the mainstream hit “Take a Bow.” The song was the germ that would later inspire Madonna to seek out and conquer electronica with the likes of William Orbit and Mirwais. A

Power of Goodbye (1998). Structured like your average Adult Contemporary ballad with enough electronic sheen to sound edgy, “The Power of Goodbye” was the ultimate in electronica-lite. If the song’s themes of empowerment aren’t enough to lift the spirits, rhythmic guitars, sweeping strings and a soaring melody elevate the listener to several clouds above 9. Perhaps better left within the aural context of Ray of Light, the song peaked just outside the Top 10. A-

Beautiful Stranger (1999). Like any good throwaway track, “Beautiful Stranger” doesn’t pretend to be much more than it is. Whiny guitars and flutes abound, Madonna and Orbit concocted a perfect theme song for friend Mike Myers’s cooky Austin Powers: The Spy Who Shagged Me. Playful, wispy and ultimately forgettable—well, as the lyrics say: “La-da, da-da, da-da, da/Da, da, da-da, da/Beautiful stranger.” B-

Frozen (1998). “Frozen” was Madonna’s return to pop music after a detour that took her from Argentina to motherhood to spiritual reawakening. After reuniting with longtime songwriting partner Patrick Leonard (“Live to Tell,” “Like a Prayer”), Madonna called on Orbit to pump the track with expressive drum fills and pulsating electronic effects. Its lyrics were uncomplicated but its statement was grand: “You only see what your eyes want to see/How can life be what you want it to be?” Praised by the likes of Tommy Mottola and Tori Amos, Madonna and Co. crafted what can only be described as one of the greatest pop masterpieces of the ‘90s. A

Take a Bow (1994). Madonna commissioned some of R&B’s elite for Bedtime Stories. Perennial favorite Kenny “Babyface” Edmonds was one such collaborator, co-writing and producing “Take a Bow,” the longest running number one hit of Madonna’s career. Working with superstar producers is a rarity for the singer; hot off the heals of hits like Toni Braxton’s “Breathe Again” and Boyz II Men’s “End of the Road,” Babyface was in scarce company. The ballad was at once syrupy and bittersweet, calling on the words of one William Shakespeare to help recount the tale’s dramatic conclusion: “All the world is a stage/And everyone has their part/But how was I to know which way the story’d go/How was I to know you’d break my heart?” B+

Ray of Light (1998). Like no other Madonna hit in recent memory, the frenetic “Ray of Light” found the singer in a celebratory tech-frenzy. Whether it was an epiphany of the spiritual or sonic kind (Ray of Light marked a dance-rooted homecoming for the pop star), her elation was unmistakable: “Quicker than a ray of light, I’m flying…And I feel like I just got home!” Orbit’s cycles of analog synths and electric guitar licks perfectly supplemented the elasticity of Madonna’s newly-trained vocal chords. Not since “Over and Over” or “Deeper and Deeper” had Madonna reached such dizzying heights. A

Don’t Tell Me (2000). “Don’t Tell Me” was the most unlikely follow-up to 2000’s “Music.” Stop-and-go guitar riffs, an atypical structure and peculiar lyrics (“Tell the bed not to lay/Like the open mouth of a grave/Not to stare up at me/Like a calf down on its knees”) made it an unlikely hit to boot. But a hit is exactly what it was, earning Madonna her 27th Top 5 hit and 24th gold single (tying the Beatles). “Don’t Tell Me” found Madonna at her most soulful, with a vocal performance reminiscent of the forceful tone of “Express Yourself.” B+

What It Feels Like for a Girl (2000). Madonna’s softcore feminist statement (“When you’re trying hard to be your best/Could you be a little less?”) is largely lost amid the conventional sonics of Music’s final single, released earlier this year. Co-produced by Guy Sigworth and Mike “Spike” Stent, known for their dynamic work with Björk, “What It Feels Like for a Girl” is GHV2’s least dynamic offering. C

Drowned World/Substitute for Love (1998). The autobiographical song that introduced the world to the new “Spiritual Girl” on 1998’s Ray of Light and kicked off this summer’s Drowned World Tour was never released as a single in the U.S. but certainly earns its spot among the hits. Layered with vocal samples and buoyant drum n’ bass beats, “Drowned World” sums up much of Madonna’s personal tribulations with fame: “I got exactly what I asked for/Running, rushing back for more…And now I find, I’ve changed my mind.” B

Music (2000). It was back to basics on Madonna’s twelfth and most recent chart-topper: dance, celebration, unity and, of course, music. “Music” aptly closes GHV2 with its retro club beats and vintage synth sounds; even Madonna’s chirpy vocals recall her initial heyday. “Music makes the bourgeoisie and the rebel come together”—only a former material girl living in a Nasdaq world could get away with a song like this. B+