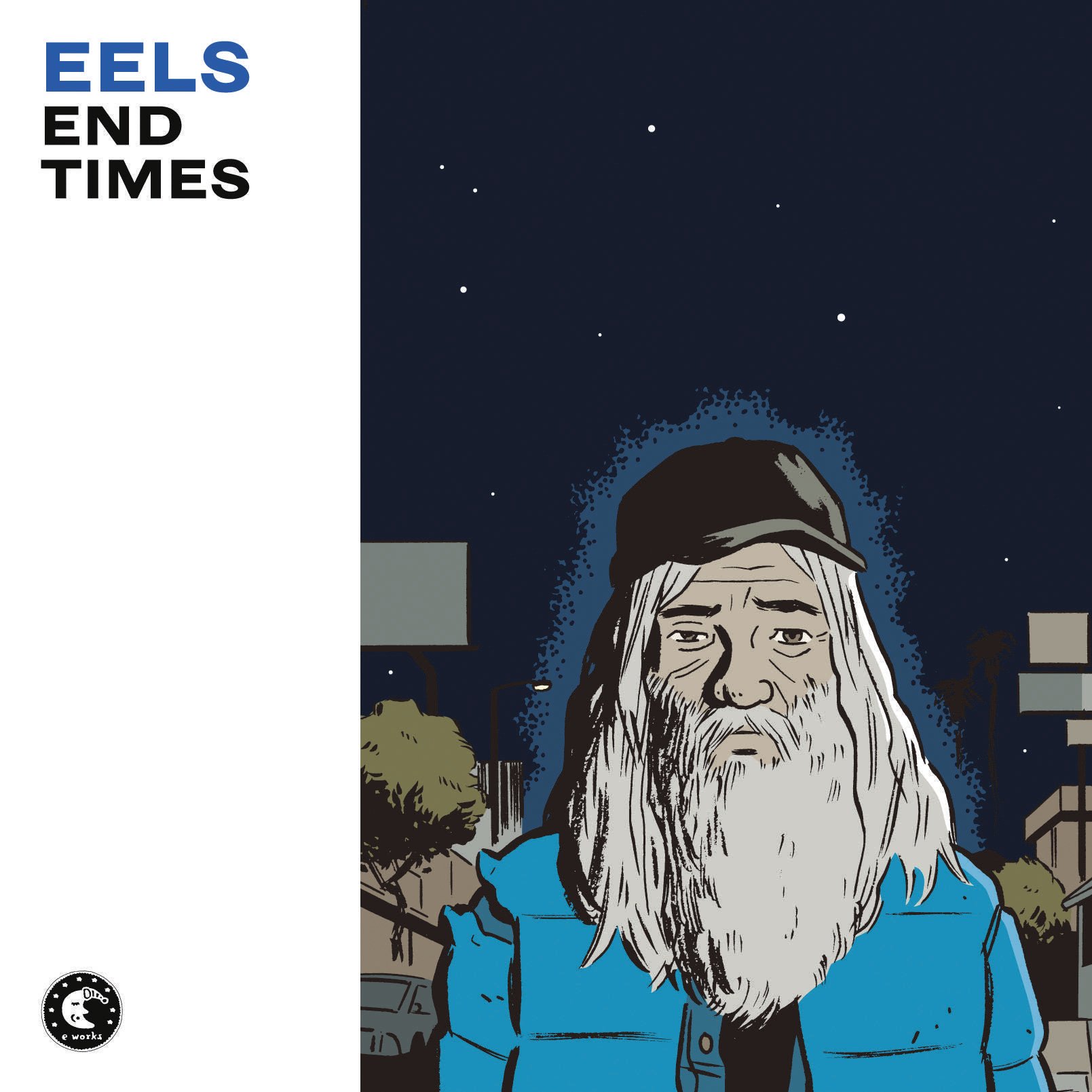 And so the Mark “Eels/E” Everett train continues to rumble deeper down its quixotic tunnel. Just six months after the release of Hombre Lobo: 12 Songs of Desire, a gritty puzzler that I found oddly compelling in its yawping disarray but plenty of Eels followers found execrable, E returns with End Times, a kinder, softer, gentler set of ruminations that at first blush seems like the hangover of its predecessor’s wild night. Typical for the prolific, scatter-brained E, the apocalypse in the title signifies a lot of things—the end of the world, a breakup, his own death—except the musician’s retirement, an event as likely to happen as his making an album everyone can agree on.

Recalling the somber valleys of 1998’s classic Electro-Shock Blues but lacking that record’s profound connection to real events, End Times is mostly E being a mope for mope’s sake. Which doesn’t have to be a bad thing, because the guy does sad-bastard music better than most sad bastards even when his investment in the material comes off as half-hearted. Probably the best thing here, “A Line in the Dirt” exemplifies E’s knack for writing a trembly, poignant ballad and executing it to near perfection. After opening on some plodding pop piano and a characteristic E couplet (“She locked herself in the bathroom again/So I am pissing in the yard”), the song slowly flowers with the help of a subtle, horn-fed accompaniment and ascending Beatles-esque refrain. “Nowadays” and “Little Bird” tread the same territory of bummerdom but with less pizzazz, and support the argument frequently leveled at E that he is little more than alt-rock M.O.R., the Starbucks version of avant-garde.

End Times may present a veneer of E at his most delicate and toned-down, but that doesn’t mean we don’t get moments of unintentionally comedic artistic hubris. How else but misguided, embarrassingly earnest, and just plain silly would you describe “Apple Trees,” which is a 40-second-long spoken-word segment in which E tells an anecdote about passing an apple orchard while on a car trip and focusing on one tree about eight rows back, “one tree in a billion, and that’s how I felt”? Then there is an ill-advised descent into Dylan-aping issues rock on “Paradise Blues,” a gnarly rant that starts out with a suicide bomber as its target before turning on the singer himself. And the naked piano-and-vox “I Need a Mother” needs no explanation beyond its ridiculous title. One gets the sense that E just can’t help including these divisive, sure-to-be-hated spitballs, and for that reason they’re easier to forgive.

E seems to walk a fine line between triumph and disaster on every album he releases, and even if on End Times Mr. Everett falls pretty obviously over the wrong side of that line, it’s as easy to blame the flop on a trick of probability than on a clear artistic trajectory. You never know what’s coming around the bend with this guy, and that’s part of why anybody keeps paying attention to him: It could be the second coming of Electro-Shock Blues, it could be more splitting-of-the-difference between “A Long December” and Sea Change as found on End Times, it could be an a cappella opera in which E plucks the hairs of his beard like a harp. All that’s for sure is that it will probably be at least partially disappointing.

Review: OK Go, Of the Blue Colour of the Sky