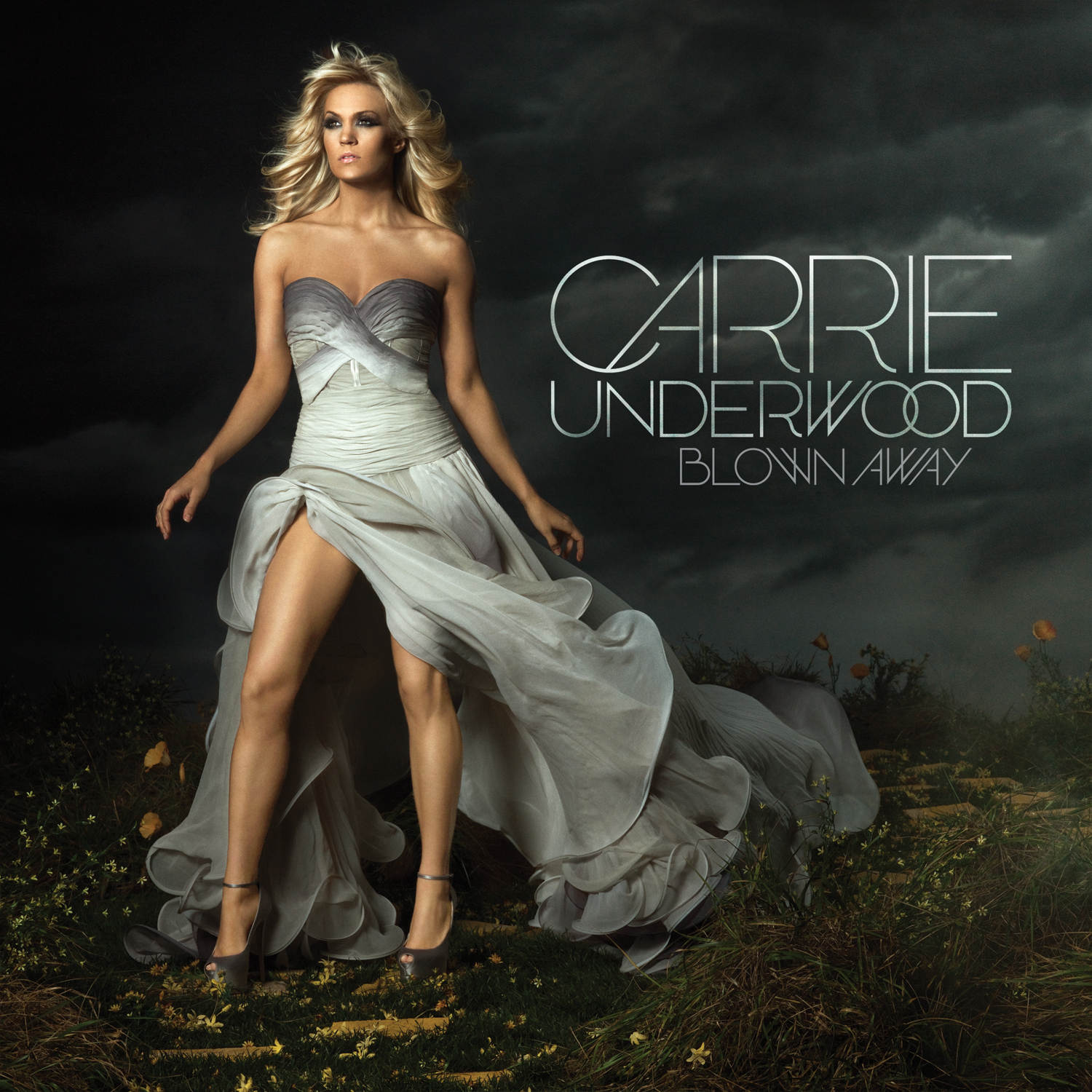 Had Carrie Underwood not been so grossly, globally overpraised right out of the gate, her fourth album, Blown Away, would stand a better chance of being received as the significant step forward it actually represents in the singer’s development. Though the album is still a far cry from being great on its own merits or from being a fully realized, well-calibrated statement of artistic identity, it’s nonetheless a welcome surprise to hear Underwood finally making some substantive headway toward recording music that aspires to be more than merely pleasant and safe. Even when she and her go-to team of producers and songwriters falter on Blown Away, Underwood at least takes far more creative risks than she ever has before and occasionally strays from a formula that had become stale and predictable.

In terms of style, Underwood and producer Mark Bright continue to lean more heavily on the “pop” half of the brand of slick pop-country that comprised the singer’s first three albums. But there’s far greater range in the production here than on the bombastic Carnival Ride or the spit-shined Play On. The aggressive, rock-leaning lead single “Good Girl” owes as much to Guns N’ Roses as it does to Shania Twain, while “One Way Ticket” is inspired by the beachcomber-country of Kenny Chesney’s signature hits. Whether or not any of those influences reflect good taste is up for debate, but the tracks themselves represent significant departures for Underwood. Far better are “Leave Love Alone,” which boasts a fantastic rhythm section and slinky groove that’s the first genuinely sexy flourish in the singer’s catalogue, and the light-handed, mostly acoustic “Do You Think About Me,” which includes an arrangement that draws equally from the best of both country and pop conventions.

It’s not that any of these aesthetic choices are innovative in and of themselves (indeed, they’re things that many of the most compelling artists in modern country have done just as well or better before), but they’re unexpected from someone whose output has been as doggedly conservative as Underwood’s has been. Nor are all of the production choices effective: Brad Paisley’s trademark guitar work on “Cupid’s Got a Shotgun” pulls too much focus from Underwood’s fun performance, and the chorus of power ballad “See You Again” is marred by dated, campy arena-rock clichés. Least successful is the reverb effect Bright slathers on Underwood’s vocal on the otherwise well-produced title track, making the singer sound oddly distant and undercutting the impact of her fully invested performance. Still, these are notable changes to a formula, indicating that far more effort went into Blown Away than into the singer’s previously underwhelming, unchallenging work.

Less of a surprise, then, is the inconsistent quality of the album’s songwriting. While it’s admirable on some level that Underwood remains committed to developing her craft as a songwriter, it’s also telling that the strongest songs tend to be those on which she doesn’t share a writing credit. At this point in her career, she hasn’t demonstrated that she has anything particularly novel to say, nor has she developed a distinctive writer’s voice that elevates her conventional narratives or ideas. The scorned-women-turn-to-murder conceit of “Two Black Cadillacs” makes for refreshingly dark subject matter from Underwood, but it leaves out entirely too many details to give its tale the weight it would need to rank alongside similarly themed songs like the Dixie Chicks’ “Goodbye Earl” or Miranda Lambert’s “Gunpowder and Lead.” “Good Girl” boasts a strong melodic hook, but it’s squandered on the refrain’s simpleminded lines about “goodbye shoes” and a no-good man who’s described only as, “low, low, low.”

“Nobody Ever Told You” packs in a host of the most clichéd images (the choruses alone makes references to a “bird on a wire,” “flower growing wild,” “shin[ing] like a diamond,” and “glitter[ing] like gold”), but its greater issue is that its message about inner beauty and mirrors that tell “lies of vanity” isn’t at all credible when coming from a woman who’s the face of a long-running cosmetics ad campaign. It’s like when Kellie Pickler showed up on American Idol, post-breast augmentation, to sing, “Don’t you know you’re beautiful/Just the way you are,” without a trace of self-awareness. Underwood’s most vocal devotees are quick to make their hatred of Taylor Swift known whenever anyone says anything positive about Swift, but not even as a teenager did Swift write a song as flat-out juvenile as “One Way Ticket.” However much of a departure the track’s island-inflected production might be for Underwood, a song about how “life is a ride on a party bus” or “[life] is a carnival-candy treat/Unwrap it like a lollipop/Lick it/We got a one way ticket” should be an embarrassment for any artist of her stature.

Blown Away simply fares better when Underwood looks to outside writers for material. Although the title track ultimately lacks the grace and resonance of Martina McBride’s classic “Independence Day,” the song it most closely resembles in theme and structure, it marks both the most emotionally complex song and the most engaging narrative that Underwood has yet tackled. That her performance impresses as much for its palpable empathy as for its vocal technique is an encouraging sign of how Underwood continues to mature as an interpretive singer. “Leave Love Alone” balances its jaded anti-love POV with a wry self-deprecating streak, and Underwood’s playful delivery finds her exploring different timbres of her voice with confidence. “Do You Think About Me” is even stronger, a song that reflects on a long-ended relationship with a heady mix of wistfulness and regret. And once again, Underwood rises to the occasion when given the opportunity to tackle multifaceted, well-written material, giving a thoughtful vocal turn that proves how truly effective singing is rarely about belting out glory notes.

There are multiple songs with some actual heft and depth on Blown Away, and Underwood’s performances on those songs are far more lived-in and nuanced than anything she’s recorded before. Moreover, when she shows restraint in her singing, she’s even able to elevate more straightforward songs like “Good in Goodbye,” far and away the best of her co-writes, and “Forever Changed,” which predictably skews toward the maudlin in its third act, but mercifully doesn’t turn into a didactic screed like Play On‘s garish “Temporary Home” did. When Underwood and Bright play it safe on filler like “Thank God for Hometowns,” “Nobody Ever Told You,” and “Who Are You,” all of which are wholly interchangeable with any number of tracks from Some Hearts or Carnival Ride, it becomes all the more apparent exactly how tepid Underwood’s earlier work was.

Review: Santigold, Master of My Make-Believe