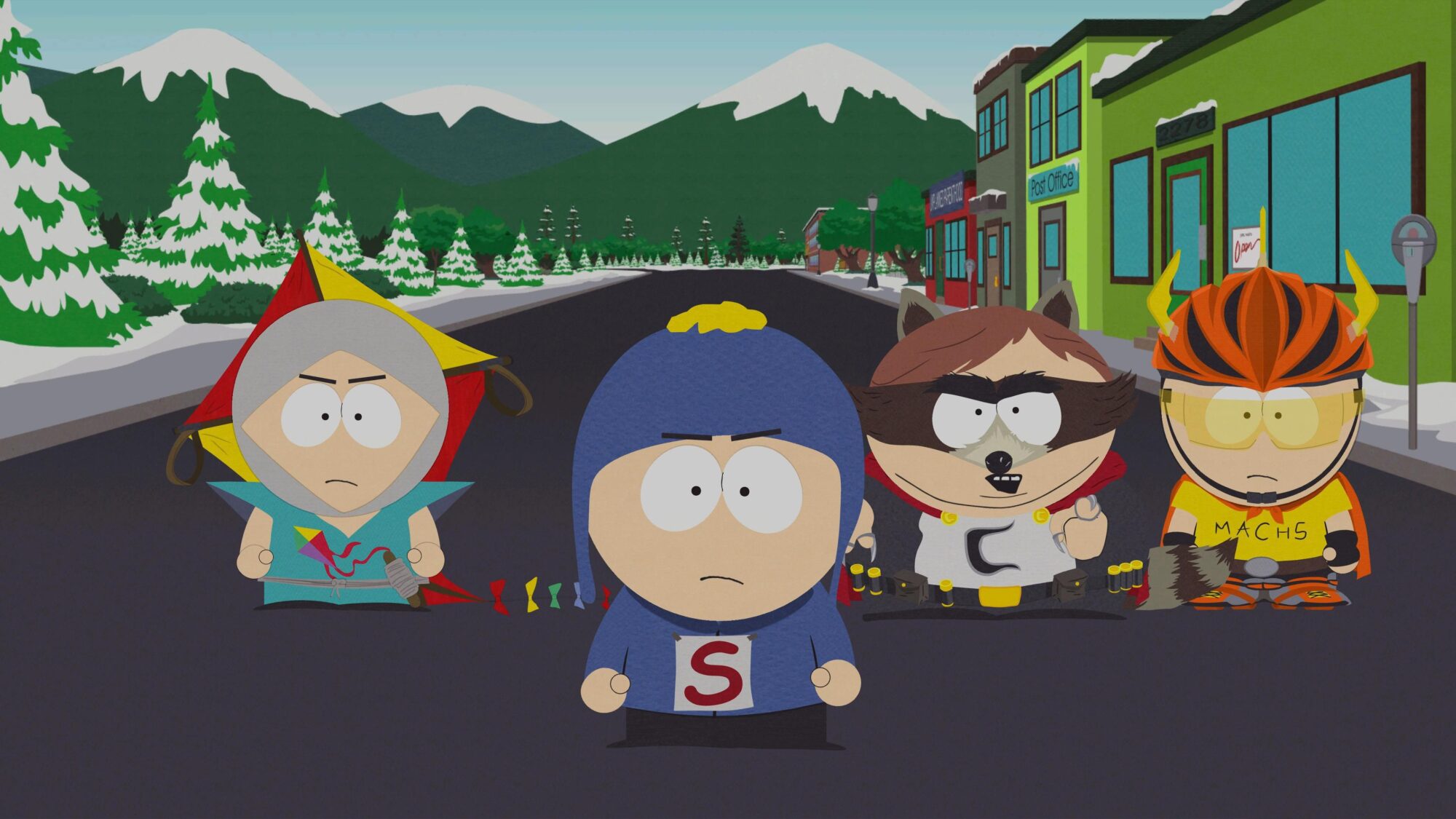 Picking up directly after South Park: The Stick of Truth, South Park: The Fractured But Whole sees Cartman interrupting the ongoing Medieval-themed playtime shenanigans of South Park’s fourth-grade schoolboys by telling them that they’ll be playing at being superheroes. Once again donning the persona of the Coon—his gross interpretation of both Wolverine and Watchmen’s Rorschach—Cartman has taken on the mission of finding a missing cat, Scrambles, in order to collect a $100 reward, and thus kickstarting his own cinematic universe based around his superhero group, Coon and Friends. Standing in his way, however, are his rivals, the Freedom Pals, a group of Coon and Friends ex-patriates investigating the missing-cat case as proof of something bigger going on in South Park’s seedy underbelly but who would also like to solve it so they can start their own cinematic universe.

Virtually everything troublesome and disappointing about The Fractured But Whole can be encapsulated during the character-creation process, in which you craft your silent protagonist—dubbed “New Kid” or “Douchebag,” just as in the last game—whose fart-based superpowers will be the key to saving the city of South Park. A slider allows you to pick your protagonist’s skin color and (supposedly) difficulty setting, labeling the spectrum from pale Caucasian (Very Easy) to deep, ebony black (Very Hard). It’d be a wonderfully sharp, biting piece of commentary that tied right into the game’s mechanics, especially if it affected how people treated you, but in reality the slider doesn’t do anything. Parker and Stone seemed to just want to make the joke, no different than when they made “Jew” a cleric class in The Stick of Truth.

Such is The Fractured But Whole’s relationship with virtually all of the hot-button issues of the present day: from an entire sideplot involving the police rounding up all of South Park’s black people on fake drug charges, to a stage based around fighting off the Mexican laborers employed at minimum wage by Professor Chaos, to the game offering an entire slate of gender options that don’t figure into the gameplay. In another year, this might all come off as only a waste of some really grand ideas for biting satire. But this year in particular, making light of but then failing to engage injustice in any meaningful way—especially as biting satire—comes off as cowardice.

Instead, what the game cares deeply about is poop, fart, and penis jokes—and penises of all shapes, sizes, and consistencies. South Park, of course, was built on that kind of humor, and Stone and Parker are generally good at it. Hell, the very title of the game is subtly brilliant on that level. But even compared to its predecessor, The Fractured But Whole leans hard on that kind of humor as the glue holding together its entire infrastructure. It’s the basis of your protagonist’s superpowers, and all of the more ridiculous, far-reaching time-and-space insanity that comes later is predicated on it, to the point where it’s not funny or even gross anymore, just numbing. It should be acting as the juvenile respite from a larger, sharper bit of humor, but the game’s humor is strangely less beholden to killer jokes and material than it is to an overall atmosphere of ridiculous scenarios. Laugh-out-loud moments are few, and the “smarter” humor not landing makes the dumb material look dumber, and the more glaring turned-up-to-11 offensive moments—in particular, an appallingly sexist and racist boss fight at a strip club—even more off-putting.

The irony here is that The Fractured But Whole succeeds best at its most innocent. As it was with The Stick of Truth, the idea of basing an entire RPG off of the fully realized playtime games of neighborhood kids is delightful, and toying around with their concept of superheroes is fertile ground that the game revels in to its fullest. Even if the player doesn’t have a working knowledge of South Park’s characters, locations, and 20-year history, it’s easy to enjoy the long stretches where it’s just the kids operating in a beautiful half-fantasy where costumes are held together with tape and glue, but their powers are real, and the entire town plays along. This is a world of homemade secret bases, betrayals, mid-fight arguments over one kid changing the rules, showing up with powers they didn’t tell anybody else about, epic Captain America: Civil War-style battles being interrupted because a car’s coming down the street, constant assaults by mean sixth graders. The closest analogue to this game would be Double Fine’s Costume Quest, but even that doesn’t commit as deeply to one aesthetic as this does.

Even more surprising are the brief moments where The Fractured But Whole is almost poignant even within the realm of typical South Park humor. Resolving a fight between gay couple Tweek and Craig involves school counselor Mr. Mackey letting the duo take out their frustrations on actual kids named Frustrations and Resentment, among others. One of the game’s best reveals is an incredibly sweet moment in favor of everybody playing together, while also lightly jabbing at the Marvel Cinematic Universe Phase model.

The real saving grace of the whole thing, though, is that the game is mechanically one of the best, most accessible RPGs crafted in a long time. It remains a sort of R-rated Paper Mario, using simple turn-based combat and contextural button presses for extra damage/defense, but a new grid-based playing field adds much-needed tactical complexity, and the superhero genre allows for some rather incredible, imaginative flash and flair with every attack. Outside of combat is a customization system that, while not as versatile as something like Saints Row IV, still provides a ton of flexibility for making the protagonist unique. Puzzle-solving tends to follow the lead of Traveller’s Tales’s Lego games, but even then, your protagonist’s superpowers are just complex enough to make solving puzzles here feel a bit more gratifying.

The grand total of all this is a game with a thorough understanding of the social issues it chooses to address but is too sneering and cynical to actually care about them. It would much rather be playing Marvel Heroes in the streets with friends, which would be fine if we were dealing with a game made by a preteen for other preteens, not the most visible, privileged satirists on the planet, who’ve proven multiple times they’re capable of doing both.