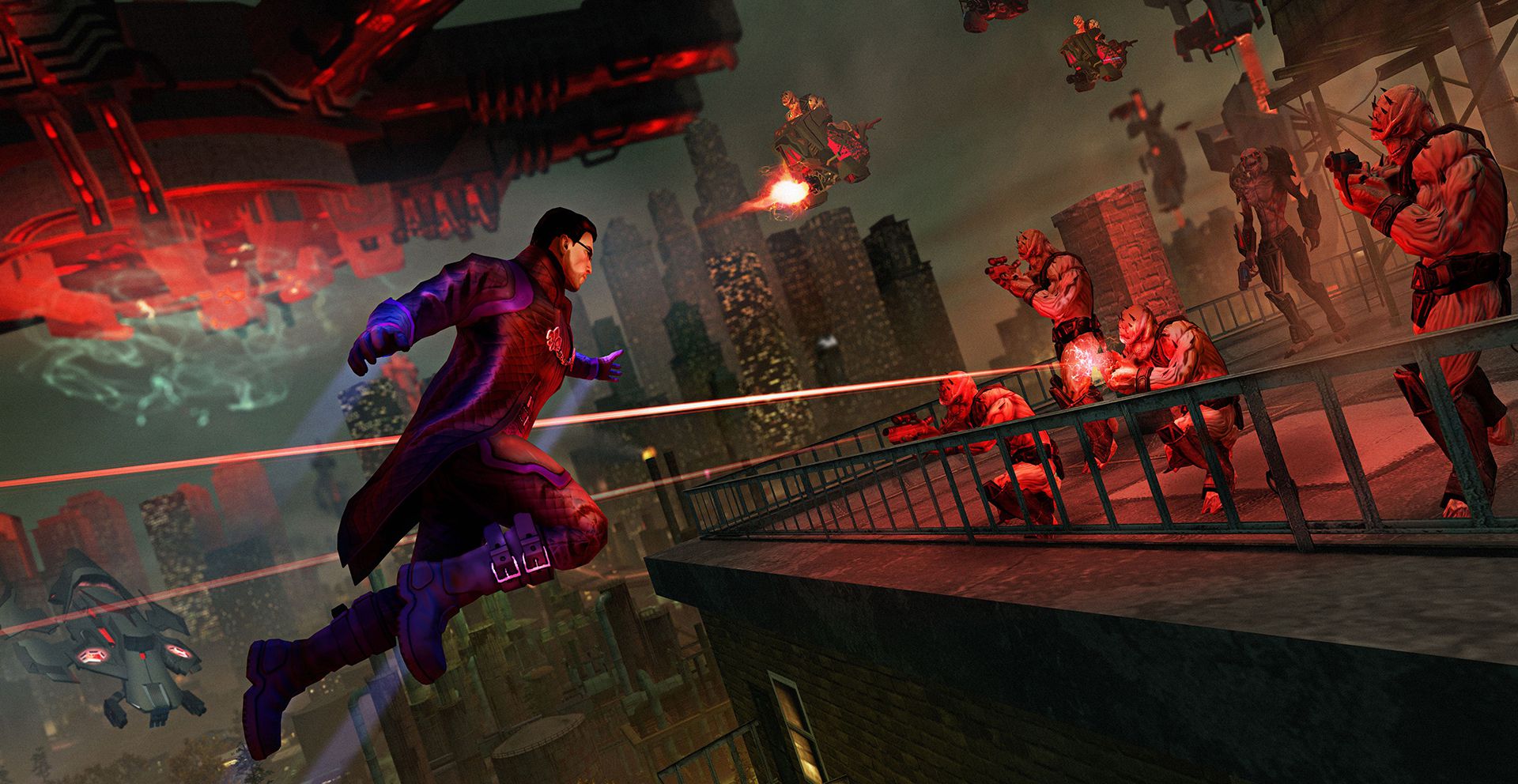 Saints Row IV attempts to improve on 2011’s Saints Row: The Third in an unexpected way, inexplicably appointing the player character as the President of the United States, as well as transporting the central open-world hub city of Steelport to a virtual version of itself, thereby granting members of the Third Street Saints countless superhuman abilities in order to combat a race of invading extraterrestrials. It’s these vastly overpowered, almost godlike capabilities that are both a plus and a minus for the fourth entry in the largely successful Saints Row franchise. The game is initially a hyperactive, comically plotted experience, but later loses its creative edge with the introduction of numerous uninspired middlebrow missions and an often tedious cycle of inconsequential, off-the-wall combat.

Customization reigns in Saints Row IV: The game’s early hours, wherein you meticulously manufacture your glorified gang-leader-in-chief, are filled with tons of TPS action-adventure parodies and a fair amount of laugh-out-loud moments that should cause even the most uptight player to crack a smile. The recently renovated variant of Steelport, a quasi-Washington D.C. dystopian cyberscape, is an environment that allows for tons of exploration, and the inherited batch of quick-travel maneuvers (space-jumps, ultra-speed, and, of course, liberating flight) aid in making city traversal a unique diversion. The flipside to having such fantastical skills, essentially from the outset, is that getting killed becomes somewhat of an implausibility. Even when facing the toughest opponents, dominating Saints Row IV can be achieved with little to no concentration. Instead of slowly regenerating health, as in the prior installment, defeated enemies freely bleed energy-replenishing drops. Given the chaotic, unpredictable flow of Saints Row: The Third, this dip in mental stimulation would be a crucial misstep if simply running around the streets of Steelport wasn’t such an aesthetically lively pastime. But still, the developers could have benefited from building a superior sequel rather than just applying a coat of shiny lacquer to a previously prosperous product.

There are plenty of crazy firearms, like the appropriately titled Dubstep Gun, but they basically feel like an afterthought. The frenzied, souped-up president aspect renders everything else comparatively dull. What’s worse, when returning to reality for completion of the routine campaign objectives, there’s a hankering for the hacking-esque safety net of otherworldly techniques that remain the game’s lifeblood. Sure, there’s some habit-forming sidequests, from collecting innumerable upgrades to destroy-everything-in-sight-style minigames, but nothing screams true innovation, and these scenarios lack the absurdist hallmark Saints Row has become known for. However, there are some clever maps to roam, like one that’s an homage to Splinter Cell and another that’s a callback to Saints Row and Saints Row 2’s weather-worn burg of Stilwater. The in-game radio stations are also a hoot, KRhyme 95.4 spins A$AP Rocky and Kendrick Lamar, while The Mix 107.77 is an ‘80s/‘90s pop-rock wasteland, with tunes from Paula Abdul and, fittingly, the Presidents of the United States of America.

Saints Row IV’s co-op mode is terrifically elevated by the presence of its rampageous superpowers, making PvP deathmatch a pleasure to both take part in and observe. Unfortunately, the same can’t be said for the majority of the game’s other critical areas. Saints Row: The Third was such a monumental step forward for the series, taking everything that was already noteworthy about its predecessors and maxing out the zaniness to great effect. While Saints Row IV is far from a complete disappointment, the game wants for genuine advancements, settling for dumb fun in place of cutting-edge thrills.