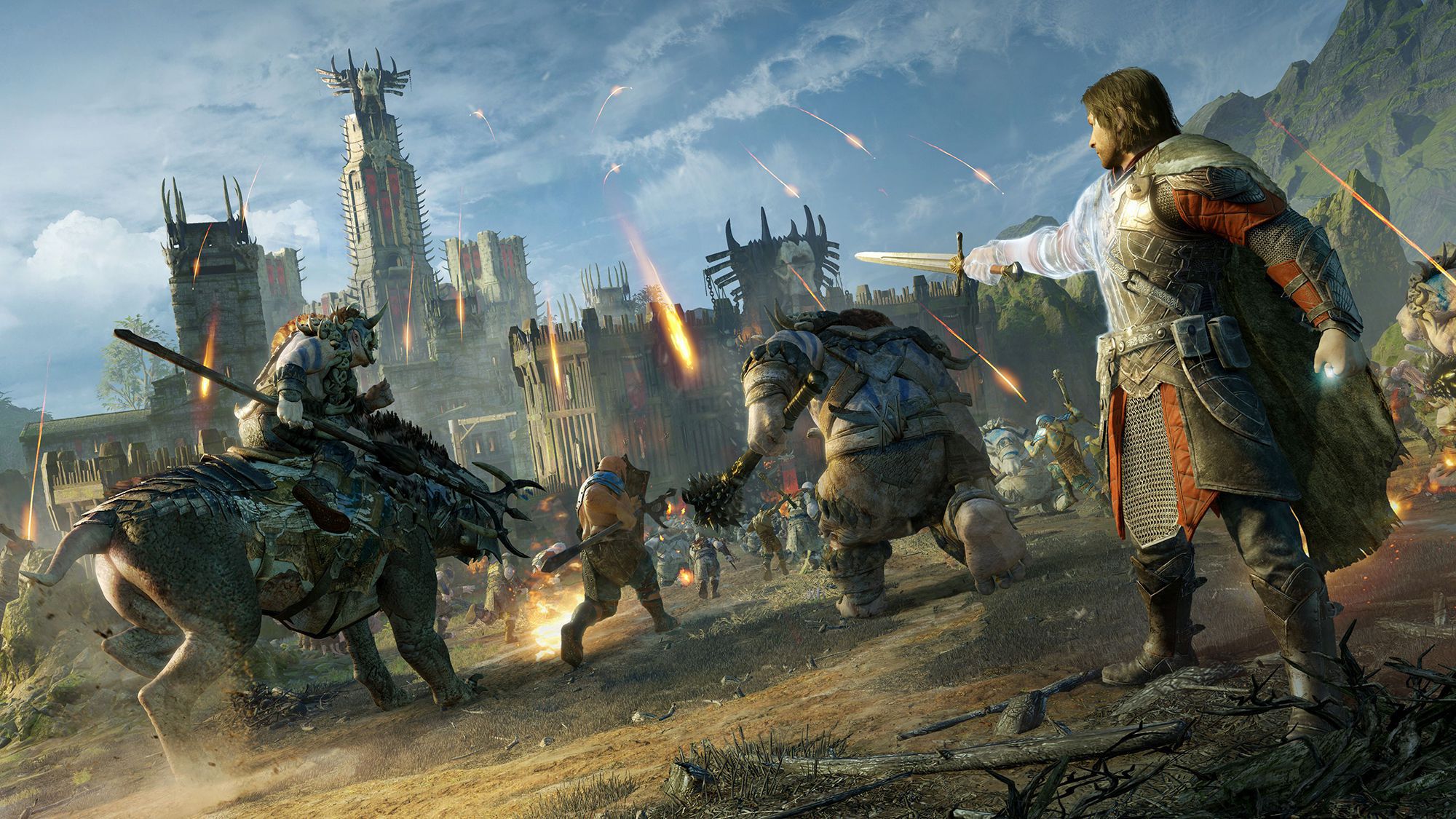 The 2014 release of Middle-earth: Shadow of Mordor was a roll of the dice that just barely managed to pay off. Yes, the Nemesis System was and still is a genius bit of game design, and Monolith Productions was right to stake virtually the entire success of the game on its use. But as a Lord of the Rings game, Shadow of Mordor is rather weightless. Despite Talion being the ostensible hero of that game, it’s a struggle to remember anything interesting that this Gondorian ranger with a blank-slate personality did over the course of the campaign that didn’t involve exploding orc heads. Players will more vividly remember the sycophant orc Ratbag becoming a somebody for the first time in his life, the moment where a Warchief’s bodyguards betray him all at once. Players will certainly have no problems remembering Talion’s literal better half, the spectral revenant of the Elf smithy Celebrimbor, who grants Talion the power to brainwash orcs and read their thoughts.

Middle-earth: Shadow of War doubles down on every single aspect of Shadow of Mordor, for better and worse. Talion, having gotten his revenge against the middle management Barad Dur stooge who slaughtered him and his family, now realizes he can’t let Sauron himself off the hook so easily, and decides to help Celebrimbor craft a new Master Ring with the hopes of slaying Sauron before he gets up to full strength. Within moments of its completion, the Ring is picked up by the most unlikely of creatures: a bizarre, unnecessarily sexy reimagining of Shelob the spider. Shelob, as an act of pity, shows Talion—through visions—that Sauron has started to make moves on Middle-earth and sends him out with her sexy spider blessings to go foil the dark lord’s plans.

Monolith is still playing fast and loose with the idea that they’re adapting Tolkien’s work, more so than even Peter Jackson ever did, and that’s even counting the fact that an R-rated cut of The Hobbit: The Battle of the Five Armies is a thing that exists. Besides Shelob, we have loose retcons of the lore behind the nine kings turned into Ringwraiths. A city of men right on Sauron’s doorstep seems very okay with having a working Palantir in their midst. A forest spirit who the game gently implies may be the last Entwife—a sexy Entwife, naturally—gets into a full on kaiju fight with a Balrog.

Like Jackson running roughshod over the Battle of the Five Armies, that isn’t to say that sacrilege against the books can’t be fun. It’s actually rather delightful seeing Monolith just throw prestige to the wind with Shadow of War by adding a shot of unhinged George R.R. Martin fantasy to the proceedings. Even then, some measure of intrigue still manages to shine through the din of this Lord of the Rings fanfic, as we see Celebrimbor growing uninterested and cynical about the dealings of men and orcs and increasingly more obsessed with Sauron, and not entirely in a “he must be destroyed” kind of way.

Once again, the way to Sauron is through his orc army, and as expected, whatever amount of true genius there is in Shadow of War lies in the revamped Nemesis system. The core concept is still the same, where Orc captains and Warchiefs of varying levels are scattered across the lands, and Talion can either stalk, terrorize, and slay the ugly brutes for fun and profit, recruit their underlings to backstab them at a crucial moment, or create just the right amount of dissent by having one of your recruits start a full-on riot. It’s still endlessly wicked just sending psychic death threats through low-level scumbags to their corpulent bosses, coming to the fight with the exact thing that scares your enemies, but now, failure can mean your tormentor breaks your sword and leaves you disgraced in the dirt. Troll assassins can stop Talion in his tracks on his way to other missions and challenge him to an on-the-spot duel. A new summon mechanic means your orc posse can be called upon at any given moment to help take out the trash.

The most impressive addition to the Nemesis system is that every region of Mordor is home to an orc stronghold which must be assaulted in order to bring the area under control. Talion can bring up to five dominated orcs and a legion of underlings to the party; for these brief periods, we get to see a full-scale war to control Middle-earth, with dozens of orcs, Uruk-hai, and trolls on screen at once, battling it out for dominance, with tiny vendettas playing out on the battlefield in real time. It’s glorious mayhem on par with just about anything from The Lord of the Rings: The Return of the King, though both Shadow of War, like its predecessor, suffers from Howard Shore’s absence.

When the dust settles, all the orcs have made themselves at home, a personally selected Warchief now sits atop the highest throne in any region, and you’re forced to remember that the hero of this story is still Talion. Nothing Monolith has added to the games has made him a better character than who he was in Shadow of Mordor. Not the new, complex upgrade system, the reanimated moveset, the new traversal options—including the blessed miracle of a double-jump, something that the first title desperately needed—and not the new Master Ring. Playing as Talion still feels like a sword-and-shield remix of the ideas fueling Warner’s own Arkham titles, and despite the blood and guts of the Middle-earth series, the mostly sanitized Arkham game feels more brutal. Everything in Shadow of War pertaining to the world of men is drawn with the kind of stock Medieval trope work that’s indistinguishable from Tolkien rip-offs that don’t have nearly the official clout behind them that these games do, and player interest in that world is the basis upon which this game hopes to reel you in with collectables, side missions, and other random busywork provided to fill the space between Talion and his next conquest. In the options menu, where an explanation of Talion’s next move and thought process should be is a menu advertising loot boxes.

Meanwhile, the orcs are a race with a whole range of skills, personalities, gimmicks, and backstories. A common orc around Mordor will employ body doubles to get shanked, only for the true one to come for Talion after the fact. One of the first trolls you’re able to dominate, Bruz, acts as the tutorial for the game’s second act, offering up hilariously boorish and bloodthirsty tips on how to build an army. One of the encounters that actually forced me to pause the game to catch my breath from laughing too hard is an orc who begins every battle by breaking into song, and makes up another song when he runs away. The orcs have essentially become the orcs from World of Warcraft—to the game’s benefit, it should be said—and the idea that this flimsy protagonist should be the one to persevere and tell their story or dispose of them at will seems strangely wasteful. Never for one second in Shadow of War does the idea of playing as Talion sound appealing, a fact Monolith themselves proved by ditching him for Shadow of Mordor’s DLC. Given the first chance, though, taking Bruz fighting ‘round the world sounds like a great time.

Once again, a line must be drawn back to Shadow of Mordor, which had the exact same problem: It was a game with a fantastic gimmick, one that brought new life and consideration to a neglected aspect of Tolkien’s novels, but we, as Talion, can only usurp, participate secondhand, and listen in, while the orcs themselves have fighting pits, play around with catapults, lay waste to castles with a hundred of their friends, and argue about personal history. In Jackson’s films, it’s easy to want the ring destroyed so that Hobbits, dwarves, elves, and men can live in harmony. It was easy to want the Rohirrim to join their Gondorian brethren to defend Middle-earth. Conversely, it’s never exactly clear what Talion wants once he achieves victory—which is something this game at least seems vaguely aware of at scattered points. If Talion is supposed to represent a better future for Middle-earth, Shadow of War is the first time Middle-earth has seemed better off left to the orcs.

Review: The Evil Within 2