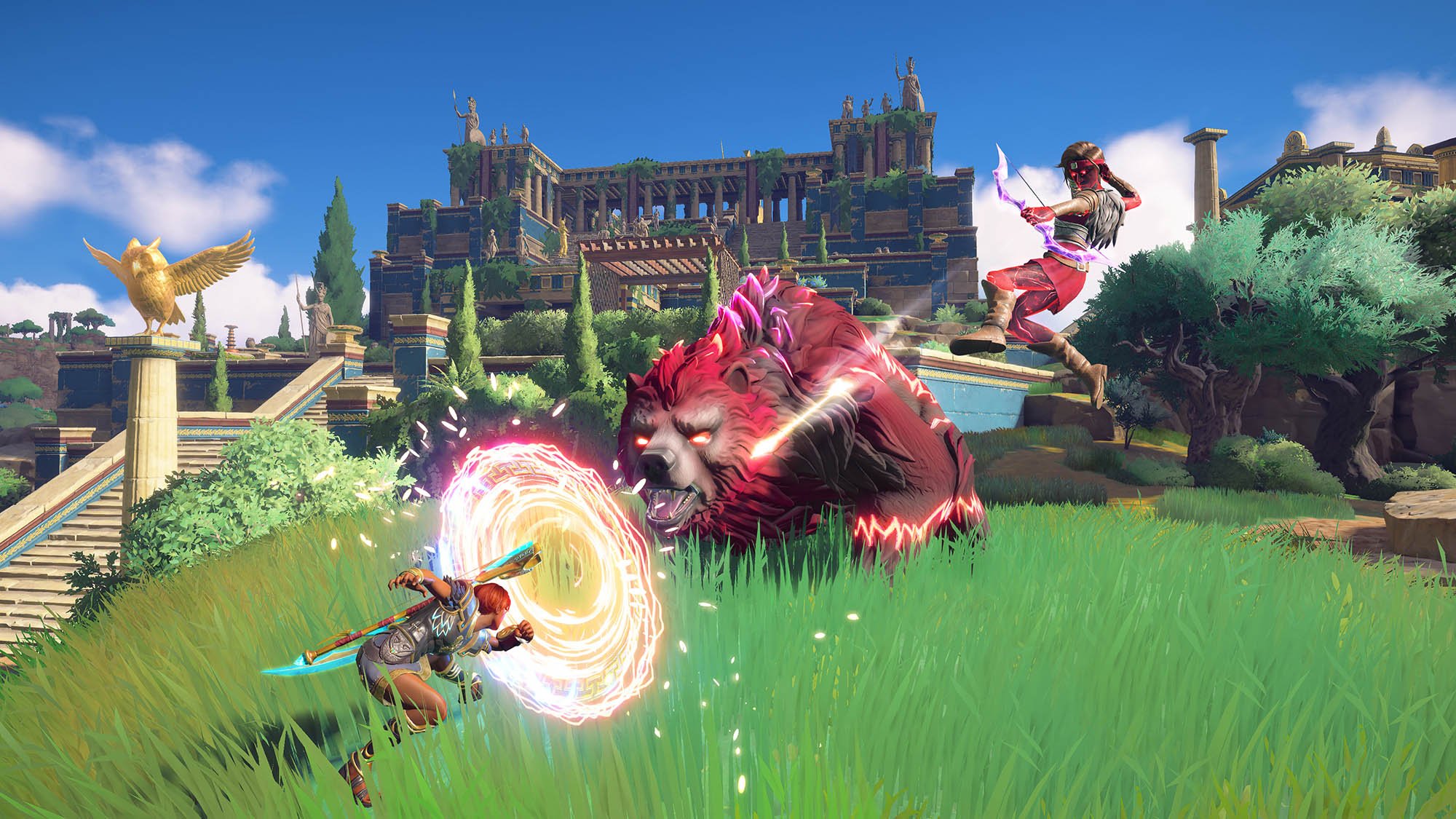 At a glance, Immortals: Fenyx Rising suggests Baby’s First Assassin’s Creed Odyssey—and that’s no coincidence, as many of the same developers worked on both titles. But it’s not long into the game that you’ll also discover that its mechanics have been copied wholesale from Legend of Zelda: Breath of the Wild: the free-soloing traversal, the physics-based puzzle solving, the loose approach to story progression, even a few of the abilities you gain over the course of the game. That wouldn’t be an issue if Immortals, like Breath of the Wild, invited players to use the tools at their disposal to create bespoke solutions to almost every problem, but Ubisoft isn’t interested in handing you that sense of free will.

A customizable Greek soldier, Fenyx, washes up on the shores of the Golden Isle, home of the Olympian gods, to find its people—including their brother, Ligyron—turned to stone, and the gods transformed into plants and animals. And after stumbling upon a few artifacts left behind by some of Greece’s mightiest heroes, you set out to free the gods and undo the spell, as well as discover just how much Immortals has copied other innovative studios’ homework without truly grasping its fundamentals. Take the early mission during which Fenyx must roll a giant pearl down a hill—so obviously designed to thwart momentum—and to the ocean in order to return Aphrodite to power. What could have been a nicely satisfying moment where the pearl rolls down and crushes everything in its path turns out to be a quite literal Sisyphean trudge, given the awkward break halfway down for an unnecessary combat sequence.

Combat in Immortals takes more than a few pages from the Assassin’s Creed playbook, with simple button mashing broken up by enemies attempting big windup attacks that you can parry. But the experience here is missing the big flashy finishing moves and chain attacks from the titles in Ubisoft’s most popular franchise, which means you’re mostly just button mashing away at enemies for much of the first third of Immortals with nothing to break up the monotony—until all of a sudden you’re absurdly powerful, and as a result can coast through the rest of the campaign. Not even the minigames and sidequests offer much of a reprieve, as they’re similarly undercooked, with the exception of a cute musical activity involving playing a melody on a lyre, then hunting down a mega-sized lyre in order to repeat it.

The blandness of the gameplay might have been somewhat forgivable if the game’s narrative didn’t suffer from an identity crisis. Immortals can’t decide whether it wants to be a cartoony redux of Assassin’s Creed Odyssey, a sincere portrayal of the Greek gods and their dramas, or a whimsical, Fable-esque fairy tale. It doesn’t really matter in the end, since it fails at all of them, largely because of the latter. The sporadic moments of storytelling that manage to intrigue, play on our emotions, or inspire a small sense of visual awe are undercut by the narrative conceit of a chained Prometheus recalling Fenyx’s tale to a Zeus who cringe-inducingly sounds like Grand Theft Auto IV’s Roman Bellic doing a Borat impersonation.

It’s hard to escape the feeling that Immortals is what you get when a better, more ambitious game has had all of its edges sanded down. Even its title change, from the evocative Gods & Monsters to its present one, feels like a deliberate softening of ambition, from a statement of authorial purpose to some mistaken attempt to get players to project their own meaning to the whole experience. In the end, just about the only truly unique element to Immortals is its sense of humor—one that’s of a distinctly lazy and irritating vintage but proves perversely memorable given how every other aspect of game works so hard to be forgotten.

The game was reviewed using a review code provided by Ubisoft.

Review: Cyberpunk 2077 Is an Immersive but Too Familiar Vision of a Future Past

Indie Roundup: Mørkredd, Call of the Sea, and Monster Sanctuary