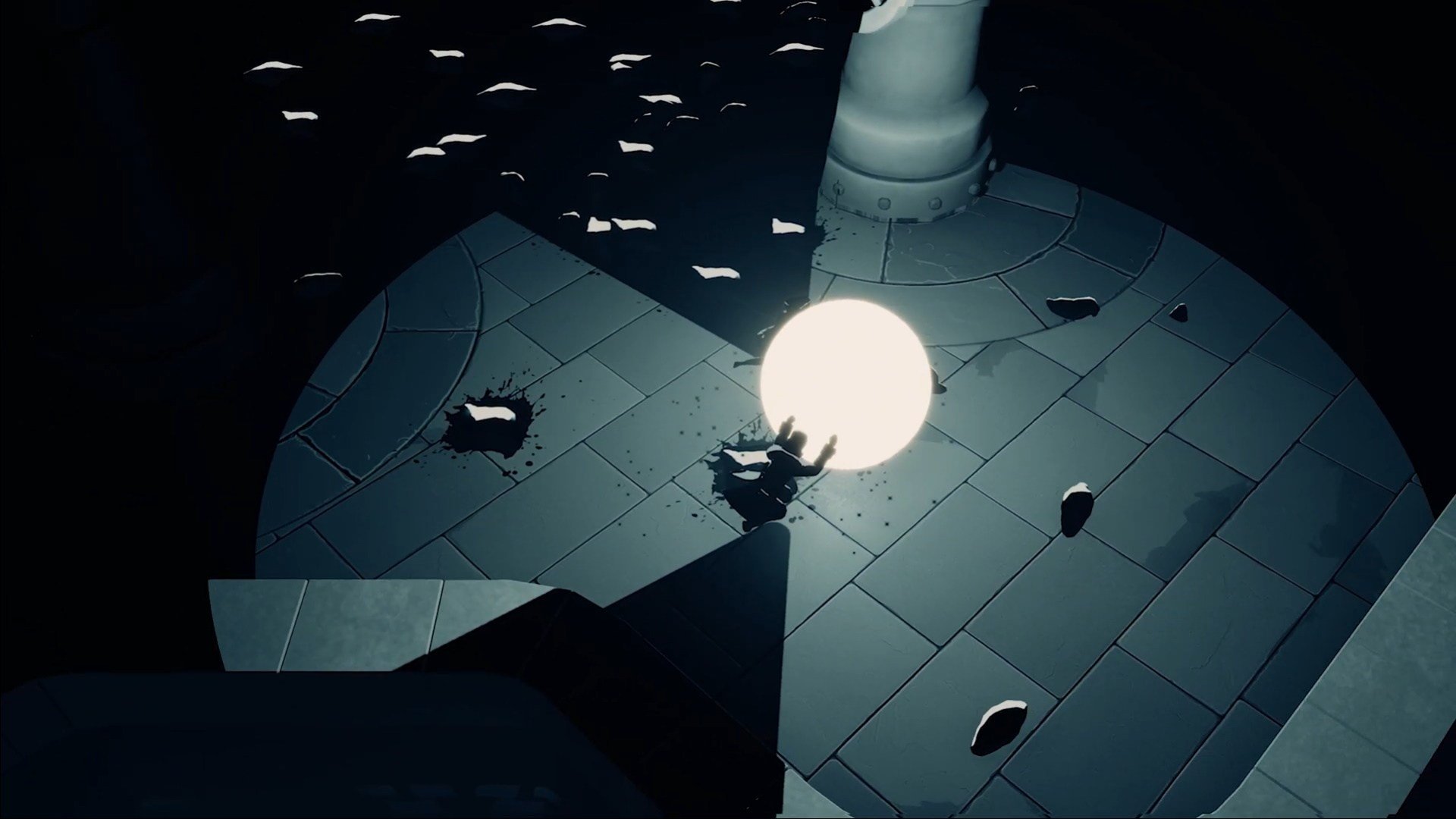 Most co-op games are predicated on teamwork, timing, and coordination, but the moody Mørkredd (Hyper Games) feels like the first to recognize how difficult a carefully crafted collaboration can be to sustain. That’s because here, as in Tunnel Vision Games’s Lightmatter, walking into shadows results in death, so as you and your partner roll a mysterious glowing sphere through a series of eerie, largely deserted shrines, you must not only avoid the hazardous darkness cast by otherwise innocuous scenery, like columns and trees, but also the umbral trail of your teammate.

In addition to this interplay between light and dark, Mørkredd smartly uses wide and tight shots to emphasize the environments and your place within them. When the camera zooms out to reveal an Eldritch horror slithering beneath the chasm you’re crossing, or a solitary eye blinking out of the water you’re rowing above, you may find yourself pondering your insignificance. And yet, as the camera pulls in tight on the life-giving light that staves off the deadly darkness across the game, it also acknowledges that these two mere transporters carry the weight of someone or something’s world on their shoulders.

There’s no shortage of unsettling sights in Mørkredd, like trees that flinch as you approach them, revealing themselves to be giant shadowy hands. But the game is truly brought to imaginative life as you travel into the bowels of a living, breathing titan. Until this point, your light source has merely been transforming common objects into deadly obstacles, but it now illuminates a host of organic horrors. One memorable stretch will find you dodging pits that pockmark a fleshy floor while rolling past exploding pustules and parasitic tendrils that seek to drain the light. And by the time you’re tasked with murdering this monstrosity—shattering its teethy barriers and preventing its synapses from firing—only for it to be fabulously reborn, you’ll be dazzled by the way the game so effectively puts you at war with yourself.

A green, thunderous fog fills the sky, framing the shadowy carcass of a ripped-apart freighter. The ominousness of this environment, one of many dazzling ones spread across Call of the Sea (Out of the Blue), is all that’s needed to convey Norah Everhart’s inner emotions as she searches for her husband, Harry, on a mysterious island off the coast of Tahiti. Unfortunately, though, we also get to know Norah through an inner monologue that sheds way too much explicit light on those emotions. Regarding her vivid dreams, she muses: “I’ve had them repeatedly ever since my mother died and left me that awful old music box.” But for the most part, the game is wise enough to shut up and let players get lost on this puzzle-laden island.

The linear, chapter-based structure of Call of the Sea ensures that the puzzles stay focused and that backtracking is kept to a minimum, all the while mirroring Norah’s state of mind. When she first lands on the island’s beach, everything is bright and hopeful. But the next chapter’s jungle is more oppressive and darker, as befits the narrative put forth in the logs and photographs that she finds in the abandoned campsites of Harry’s failed expedition, which tell of madness and disease. That third chapter, featuring a ruined ship and an eerie thunderstorm, finds Norah at her lowest point, and it’s telling that this section’s central puzzle places her right at the edge of a rocky precipice. It’s only by facing things head on and manipulating the tidal pools like the pipes of an organ that she’s able to forge a new path forward.

Call of the Sea brings Myst to mind—yes, because of the island setting and the first-person puzzling, but, more crucially, because of how firmly the game roots its mechanisms in a recognizable reality. Sure, those mechanisms have an otherworldly quality, like the one that lets you temporarily breathe beneath the water or operate rocks like elevators. But the research left behind by Harry validates them, especially as you see how his team tried to jury-rig workarounds using modern-day materials scavenged from a shipwreck. Also, the game’s puzzles aren’t arbitrary obstacles, but part of a legacy left behind by the Naacal people. Those rhomboidal motifs that appear throughout their language, architecture, and contraptions? Those are symbolic stars, a nod to the culture’s reliance on the sky above as well as the sea below. And it’s the seriousness with which Call of the Sea links history to its puzzles that makes it impossible to dismiss the game as just another Myst knockoff.

Every game aims to have a hook, something to suck players in hour after hour. Monster Sanctuary (Moi Rai Games) has four different ones, all engrossing enough on their own but collectively overwhelming in the best possible way. There are monsters to collect and train, all with lengthy skill trees, and there’s a Metroidvania-like world to explore with the aid of each recruited creature’s traversal abilities. There’s a challenging turn-based combat system that ranks players based on their combo-juggling efficiency and exploitation of enemy weaknesses. And then there’s the story, which could’ve settled for simply putting you, a novice keeper, in opposition with a quartet of evil alchemists out to subvert the powers of the refugee monsters. Instead, each monster gets nearly four pages of backstory, and NPCs often provide helpful history lessons about the schism between the Old World and those of you in this sanctuary.

Monster Sanctuary is proof that looks can be deceiving. The simple pixelated backgrounds and character sprites and monster-collecting theme evoke childish play, but the game’s battles are complex, requiring you to spend at least a little time theorycrafting your way through the skill trees, finding not just the right build for an individual monster, but for an entire team. For one, you might initially set your yeti-like Yowie up as a tank, raising its health to make the most of passives that automatically heal the whole team while also strongly debuffing foes who strike him. Further down the road, you might redistribute its skills to instead have it serve as the leadoff attacker in your trio, unleashing a barrage of fisticuffs that boost your combo meter—and, with that, the damage of your next two monsters. Later still, you might make it part of a team that exploits status effects, with its ability to chill a single enemy now chaining to every foe and carrying with it other ailments like armor down and poison.

Given its difficulty and refusal to handhold players, Monster Sanctuary can at times frustrate. Monster eggs, which allow you to hatch new creatures into your party, drop based on how well you’re doing in combat, which requires some experimenting and grinding in each new area in order to get a rank high enough to increase drop rates. Without putting in this work, even non-boss fights may suddenly spike in difficulty. But it’s only by refusing to play it safe with all of its hybrid systems that Monster Sanctuary, which can make a game Pokémon seem like a walk in the park, is able to come up with something that feels new and worthwhile.