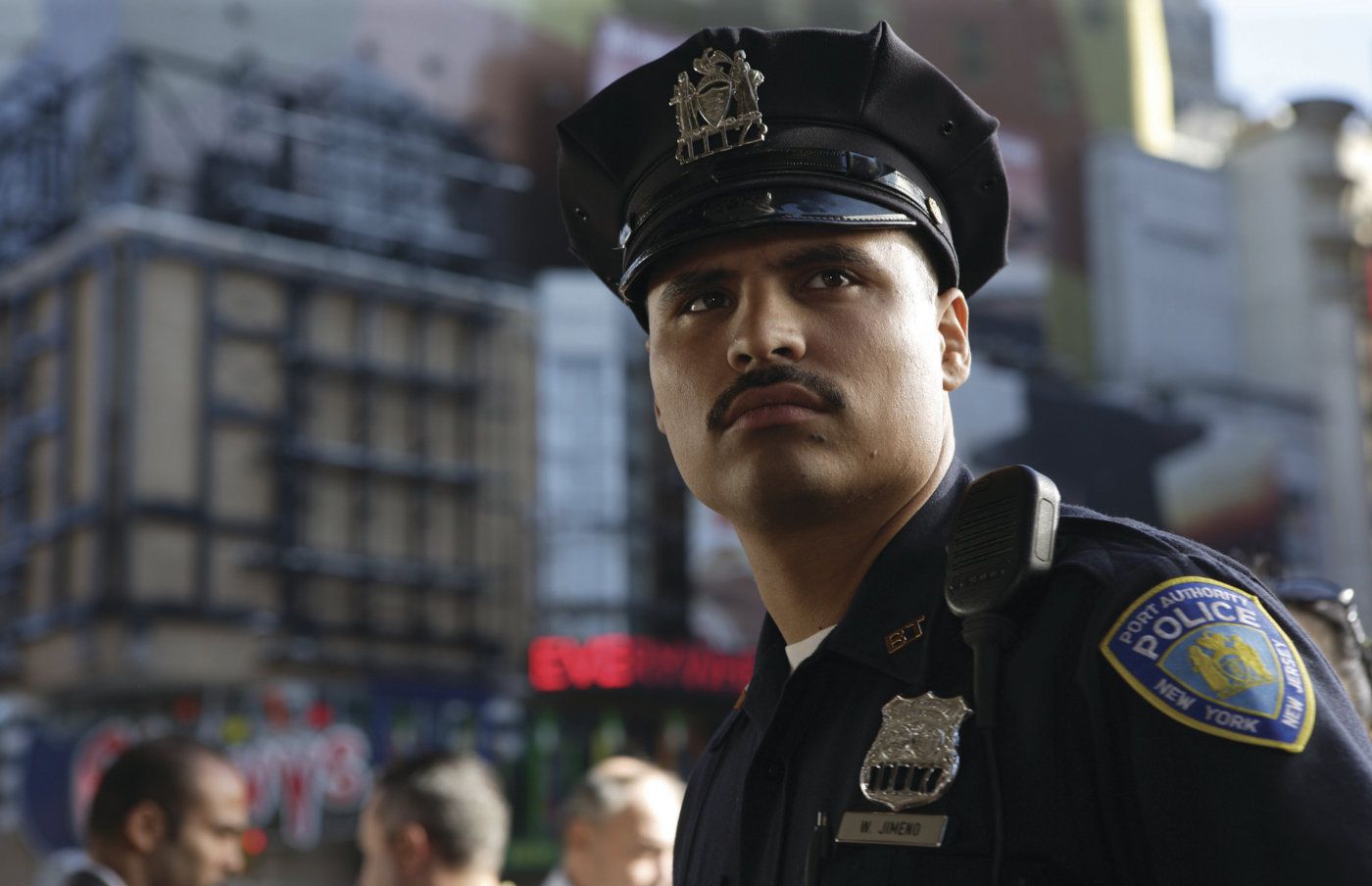 Oliver Stone’s World Trade Center begins with a sunrise montage of police officers waking and preparing for the forthcoming day, alternating between images of early morning routines and the iconic, immense Manhattan edifices (the George Washington Bridge, downtown’s skyscrapers, the Statue of Liberty) that surround New Yorkers as they head to work. It’s a warm, quiet sequence that subtly links the metropolis’s imposing structures to its denizens as equal components comprising the very bone and tissue of the city, with Stone visualizing the means by which these giant creations of glass and steel gently cradle those who walk the streets below. It’s a small but vital point about man’s relationship to his environment that’s central to this second cinematic confrontation of 9/11—which recounts two Port Authority police officers’ struggles to survive being trapped underneath the collapsed towers’ rubble—since it gets at the highly personal nature of the attacks against the WTC. As Stone effectively elucidates in this beautifully understated intro, the towers were not simply giant buildings but an intrinsic part of New Yorkers themselves. And thus it’s heartbreakingly fitting that when the filmmaker eventually cuts to a close-up of the debilitated but still-standing Tower One, the fiery, smoking hole created by the crashed plane resembles nothing so much as a vicious, gaping wound.

Such subtle artistry permeates World Trade Center, as conspiratorial firebrand Stone—reigned in either by his sobering subject matter, the failure of Alexander, or both—approaches the material with a restrained straightforwardness tinged with inventive inspiration. Unlike Paul Greengrass’s speculative cinema verité project United 93, his is a film cast in a traditional Hollywood mold—the disaster rescue picture—and crafted with all the big-budget gloss, production values, and melodramatic sweep befitting a prestigious production. For large segments, Stone is content to operate with professional efficiency, respectfully muting his own voluble presence in favor of the terrifying true-life ordeals suffered by Sgt. John McLoughlin (Nicolas Cage) and officer Will Jimeno (Crash’s Michael Peña), both of whom bravely chose to rush into the towers and found themselves buried beneath a mountain of debris, unable to move and forced to engage in heartfelt and trivial chitchat about their families and G.I. Jane, respectively, in order to keep themselves awake and, thus, alive. There’s a sturdy workmanship to the director’s mise-en-scène that brings clarity to the hectic proceedings, the narrative’s flip-flopping between the plight of the pinned cops and that of their wives, children, and loved ones handled with sentimental grace, and its intermittent flashbacks/dream sequences never overplayed to the point of becoming unduly mawkish or manipulative.

Still, sparks of Stone’s unique creativity shine through: a match-fade between a rescue agent’s flashlight and the burning sun in Will’s vision of Christ; the blurry shots from John’s increasingly dire perspective; and a gorgeous resurrection image that likens the two officers’ cavernous prison to a grave. Stone slyly sneaks virtuoso moments into his story, bringing a modest elegance to a script that frequently feels creakily old-fashioned. If those instances are too few to truly elevate World Trade Center above its modest conception as a heartwarming tale of courage, altruism, and humanity’s capacity for multicultural unity, they also prevent it from succumbing to cheap, exploitative corniness. And though the film’s view of 9/11 is, at times, narrow to the point of being blind—both Stone’s refusal to show the hijacked planes (only their shadows appear) and his decision to recreate the towers’ collapse from an inside-the-lobby outlook creating the impression that what’s occurred isn’t a deliberate, lethal terrorist attack but, instead, simply a natural disaster—the director chronicles his particular historical episode with tasteful aplomb, in the process eliciting genuine, nuanced performances from Cage and Peña (despite being immobile and drenched in dust and shadows), as well as Maria Bello and Maggie Gyllenhaal as the wives left to manage households while awaiting word on their husbands’ (and, by extension, their own) fates.

Largely focusing on John and Will’s predicament, the film tries to remain apolitical, the larger context surrounding the day’s catastrophe mainly delivered via TV news footage and the off-screen pronouncements of anchormen (“This is war,” Tom Brokaw ominously intones). Yet even so, the crafty Stone manages to charge his material with subtext, from the preponderance of religious symbolism (a Church’s altar crucifix, a cross hanging above Gyllenhaal’s front door), to foreshadowing hints of the calls for retaliation to come, such as in scenes of cops angrily cursing the “bastards” responsible for the unfolding horrors. Nowhere is Stone’s politicization more pronounced, however, than in Michael Shannon’s Staff Sergeant Dave Karnes, a Pentecostal ex-Marine who, inspired by W.’s televised speech, ditches his Connecticut office for Ground Zero, where he sets about searching for survivors and, fortuitously, comes to locate John and Will. At once a true-believer “nutjob” cut from an unpleasantly zealous, militaristic cloth, and yet the story’s nominal hero whose unblinking selflessness is its thematic core, Karnes is a fascinating study in love-him-and-hate-him ambiguity. He’s also, ultimately, the paradox that defines World Trade Center, the character’s contradictions echoing the small and large-scale confusion that typified 9/11, the film’s attempt to ring inspiration from an event defined by tragedy, and, finally, the stewardship of Stone himself, a filmmaker deftly balancing director-for-hire genre responsibilities with his own distinctive auteurist impulses.