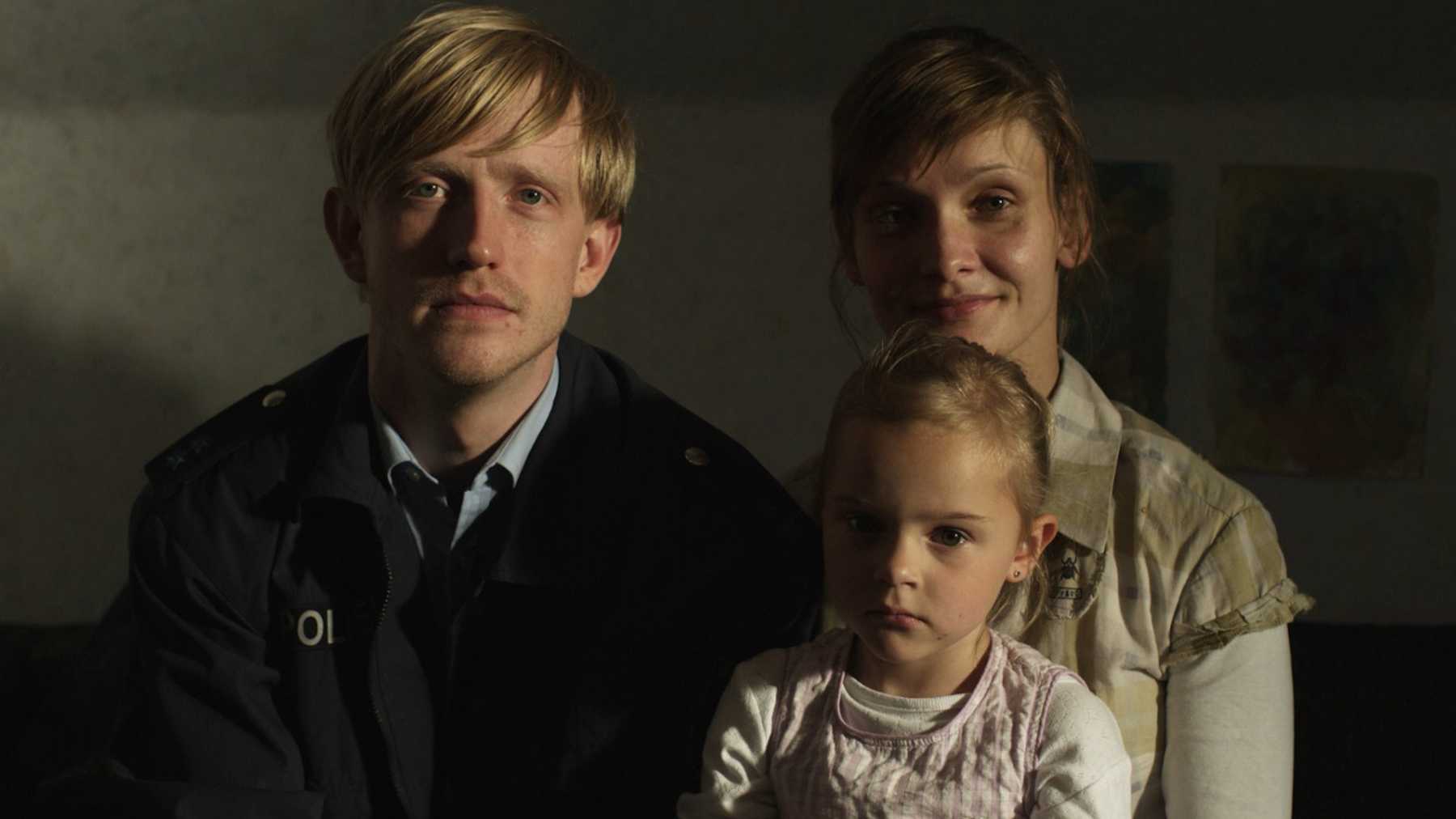 From the rough-hewn humanism of Gary Oldman’s Nil by Mouth to the shiny Hollywood treatment of the Ike and Tina Turner biopic What’s Love Got To Do With It? and everything in between, cinema has found a host of ways to portray domestic violence. But rarely can the subject have been addressed in as conceptually high-handed, chilly, and patronizing a manner as in Philip Gröning’s 175-minute slog The Police Officer’s Wife. Perhaps aiming to evoke the ruptured fabric of the small family unit on which the film focuses, but achieving only a frustratingly distancing effect, Gröning employs a self-consciously fragmented structure. The film unfolds in 59 discrete passages of varying length, each of which is bookended by excruciatingly unnecessary, fade-in-and-out captions reading “Beginning of Chapter” and “End of Chapter.” The Venice crowd initially laughed at the clanging pomposity of this device, and then became progressively, audibly, more irritated; it had easily the most walkouts of any film I saw at the festival.

This needlessly affected approach detracts from the powerful moments contained within the film—in particular scenes of tenderness between mother Christine and young daughter Clara, and grueling sequences which reveal father Uwe’s insidious manipulation of Clara. Yet one gets the distinct impression Gröning isn’t overly interested in his characters either. As Christine, Alexandra Finder breathes life into a role that is, in effect, little more than an anthropomorphized doormat, while the wiry, unsettlingly boyish David Zimmerschied makes the most of his precious few opportunities to shake off the shackles of taciturnity and fly into petulant rages. When Gröning isn’t doling out misery in his curiously finger-wagging style, he gives us doses of heavy-handed irony (the characters dolefully sing upbeat nursery rhymes down the camera lens), or obscure asides, such as the unexplained shots of a lonely old man who may or may not be a regretful Uwe in the future, but happens to be an unfortunate dead ringer for Robin Williams. (How’s that for a distancing effect, Philip?) When Carlos Reygadas gave us befuddling family trauma in Post Tenebras Lux, he infused the grim material with a sense of oneiric, unpredictable narrative and tonal elasticity; conversely, in the glum The Police Officer’s Wife, we’re at the mercy of a director set on telling us precisely nothing new in the most laborious and distancing manner possible.

Any Tom Hardy fans left deflated by the actor’s indecipherable Bane in Christopher Nolan’s The Dark Knight Rises will be pumped full of air again by his stirring one-man show in Locke. A gripping drama of the quotidian life from writer-director Steven Knight (Hummingbird), the film has a simple enough premise: Foreman Ivan Locke (Hardy) abandons the biggest building job of his life to head down the motorway to London to be with the soon-to-be mother of his unborn, illegitimate child. The execution, however, is daring. Locke takes place at night, in real time, entirely within Locke’s moving car as he negotiates his escalating slate of personal and professional problems on a hands-free speakerphone. In less steady hands, such a premise might have succumbed to dramatic contrivance or even tedium, but Knight’s personal-feeling script is witty, well-structured, and nicely detailed (the burly Locke has a sniffling cold throughout), while the film’s technical credits are impeccable. Cinematographer Haris Zambarloukos deserves credit for keeping the restricted space visually interesting by finding countless angles and positions to shoot from, while editor Justine Wright makes intelligent use of cross-fades to inform shifts in tone and connote passing time.

The only false note Knight strikes is to have Locke deliver vituperative, pseudo-Shakespearean soliloquies to his hated (and, of course, invisible) father in the rearview mirror. These passages feel a little forced and sentimental, even if they are important to the overall construction of Locke’s character and motivation. Moreover, Hardy is here channeling the spirit of Richard Burton by speaking in a richly mellifluous Welsh brogue; he could be reading a McDonald’s menu and it would be fun to listen to. As Locke ploughs toward a moving finale, it’s rounded out by some dynamic, characterful voice acting; Olivia Colman as the nervy, pregnant “other” woman, and Ruth Wilson as Locke’s understandably furious wife particularly stand out.

Media corporation VICE’s gonzo-style brand of immersion journalism—shoring up in various unstable or unwelcoming areas to deliver a shot of unbiased reportage—is appropriated as an initially intriguing plot device in The Sacrament, Ti West’s ultimately disappointing follow-up to The Innkeepers. Opening captions explain that a VICE journo, Sam (AJ Bowen), and cameraman, Jake (Joe Swanberg), have decided to accompany their photographer friend, Patrick (Kentucker Audley), on his journey to a mysterious commune from which he aims to spring his wayward sister, Caroline (Amy Seimetz), and film the whole thing. The film is by far at its best in its unsettling opening stages, where the commune is shown to be beatifically content, and the VICE boys’ cocky bravado is gradually subsumed by a creeping unease, accentuated by Tyler Bates’s creepy score. Its best scene is a genuinely compelling filmed interview between Sam and charismatic commune leader/crowd manipulator “The Father” (Gene Jones), whose long response speech raises interesting points about the ethics of VICE-style journalism, socialism, and the attraction of such an environment to a disenfranchised, working-class American populace (notably, a large proportion of the commune’s inhabitants are African-American.)

However, shortly after the confrontation, The Sacrament’s wheels come off. The narrative settles into a depressingly conventional groove, jettisoning its initial social critique and any discernible characterization in favor of wobbly cam sprints through the woods, overly violent and sloppily choreographed carnage, and timeworn religious-cult clichés. Moreover, as is so often the case in the found-footage subgenre, the spell of authenticity is broken by the sudden appearance of footage shot by cameras that, according to the film’s own internal logic, simply couldn’t exist. Such a lack of detail is symptomatic of a film which seems half-thought through and, frankly, half-written.

The Venice Film Festival runs from from August 28—September 7.