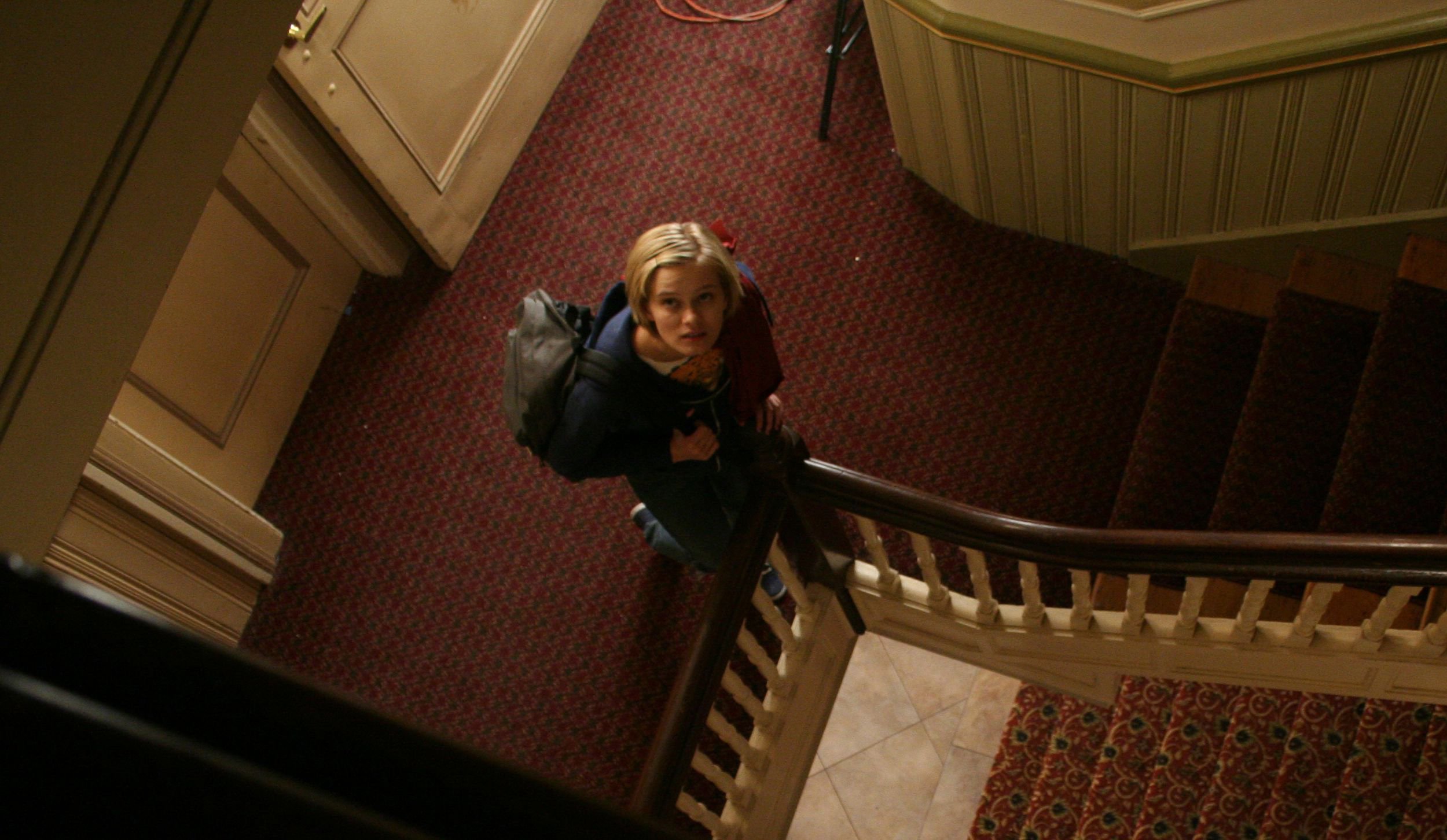 Even counting the director-disowned, studio-mangled wreck of Cabin Fever 2: Spring Fever, Ti West has yet to make a film that isn’t itself menaced by the scary specter of horror movies past, establishing an oeuvre which exists in a sort of cross-generational flux. The Innkeepers remains true to this approach, resulting in a patiently crafted thriller that’s ensconced in two layers of creaky old surroundings: the film’s actual setting and the horror medium itself. It’s West’s best evocation of such feelings yet, a brilliantly plotted piece of location-centric, minimalist horror.

Despite being set to close in a few days, the Yankee Pedlar Inn seems like a pretty interesting place to visit, boasting elegantly decorated rooms, more than a hundred years of history, and an obligatory deep dark secret. The latter involves the suicide of a jilted bride-to-be, her spirit supposedly doomed to eternal unrest, after the inn’s owners hid her remains in a storage room to evade scandal. This backstory affixes the ensuing build-up within a familiar realm of realist horror, halfway between urban myth and outright fiction, the same place West’s movies strive to occupy. It’s the perfect setting for underachieving employees Claire (Sara Paxton) and Luke (Pat Healy) to let their imaginations run wild, trading off tedious 12-hour shifts as the hotel wraps up operations. Armed with a recorder and a laptop, the two engage in a campaign of amateur ghost hunting, a seemingly pointless exercise that starts things off in a playful place, a mood that melts away as signs of an actual haunting become more and more apparent.

The Innkeepers shares obvious characteristics with West’s previous work, from the slow-burn accretion of tension to the engaging, detail-oriented exploration of a single location, the type of touches that have marked him as a throwback among a much less punctilious generation of horror auteurs. But this film, aside from being his most cohesive and balanced story yet, cements other fixations, primarily young characters trapped in the void between adolescence and adulthood, threatened equally by the past and the future. Like Samantha in The House of the Devil (dead broke, about to move into her first apartment) or the doomed teenagers of The Roost (battling intimations of adulthood on the way to a friend’s wedding), Claire is at a distinct crossroads, facing both imminent unemployment and the fact that her life isn’t turning out the way she imagined. Concerned as much with character exploration as overt scares, West frames a coming-of-age story with resolutely creepy undertones.

The outcome is even more interesting because West echoes his characters’ struggles at a formal level, attempting to break new ground while also struggling with classic genre tropes. The classic haunted-house story is probably the mustiest in the book, and West sets out to subvert it while also identifying how essential such conventions are to the form. His work has always been heavily referential, but it stands apart presently in the sense that those references are never handled ironically. The repeated snap zooms which undercut the action here aren’t cheeky, second-generation nods to Evil Dead and the ‘70s-era schlock that inspired it, they’re self-flagellating gestures toward the limits he’s set out for himself, tantamount to him slashing at his own canvas.

It helps that beyond its conventional status, the spooky inn itself proves to be a deeply effective symbol. With most of its bedrooms stripped and nearly all the guests gone, it offers only the stink of vanished possibilities and remnants of a happier past. Such feelings get compounded as more characters appear. An actress named Leanne (Kelly McGillis) checks in for a brief stay, bristling at the lazy service and grilling Claire about her plans for the future. It’s a dress-down that’s made even more painful by the fact that Leanne played the mother in one of Claire’s favorite sitcoms growing up; this sets up a nicely complicated dynamic in place of what might have been a pointless incidental character. Later, a ghoulish old man putters in, determined to pass one last night in the room where he and his deceased wife spent their honeymoon. Stocked with all these allusions to present-day confusion and faded glory, The Innkeepers begins to feel like a take on youthful modern-day malaise, a sensation cemented by Lena Dunham’s brief cameo as an infuriatingly chatty barista.

Wedging Claire between the opposing voids of the past and the future, West comes up with a visual analogue to her plight that’s equally great for building tension. The shots in The Innkeepers fall into two distinct varieties, with the director trading back and forth between deep-focus compositions, heavy with disconcertingly empty space, and stifling close-ups, which keep the rest of the scene maddeningly out of view. The best of these exchanges climaxes with the appearance of a ghost. We never see it, instead stuck with a tight shot of Lucas’s face, functioning as an audience analogue, as Claire shakily describes what’s lurking behind him.

Winding up the tension to an almost stubborn degree, West forestalls the inevitable disappointment of its release, a blow that’s further softened by how immaculately the whole movie is shot. And while they’re not nearly the whole focus, adequate scares are provided throughout, and it’s not giving away much to say that, by the conclusion, most of the inn’s secrets remain a mystery, only now with a few addenda tacked on to its sinister lore. The film ends with a deep stare into one of its rooms, before the door slams shut one last time; deepening his brand of horror with a sense of studied contemplation, West depicts a world continuously impinged on by the past, a realm we can admire but never actually enter.