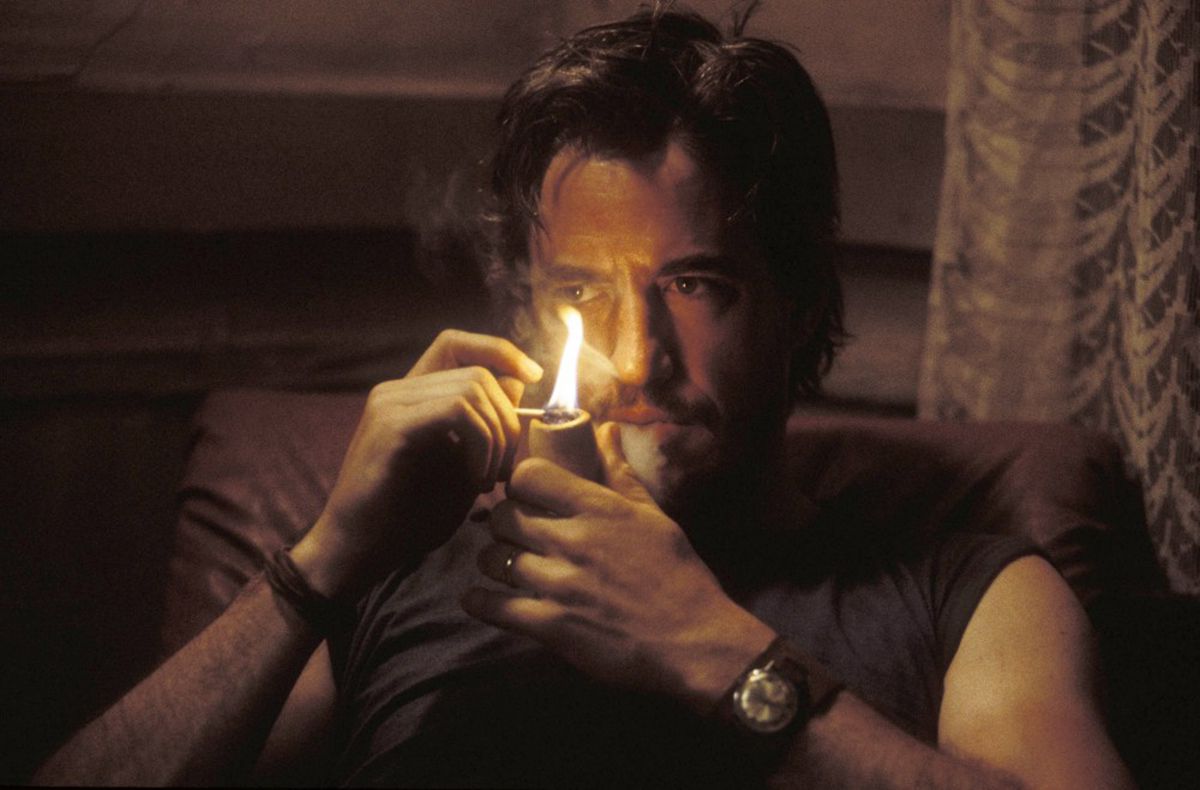 The most striking reference point for David Gordon Green’s Undertow is Charles Laughton’s The Night of the Hunter. Both tell the dreamlike tale of siblings on the run from a maniacal, murderous pursuer through a lush Southern countryside, but unlike Laughton’s uniquely expressionistic and menacing classic, Green’s film (as with his previous George Washington and All the Real Girls) is ultimately more soulful Southern gospel than Southern gothic. Chris (Jamie Bell) is a rebellious teenager whose frustration with his father’s (Dermot Mulroney) strict demands on his time—mainly involving toiling on their pig farm while his stomach pain-plagued younger brother Tim (Devon Alan) plays in the mud—has fostered a burning resentment and fierce desire to break free from his familial shackles.

Green’s intro credit sequence—in which Chris accidentally breaks his girlfriend’s bedroom window with an inappropriately large rock and then impales his foot on a board and nail while fleeing her furious, gun-toting father—establishes the film’s moody template, utilizing ‘70s-style fonts, freeze frames, transitional fades (a Green hallmark), and slow-motion to capture Chris’s clumsy, confused attempts to escape his current condition. Chris gets his much-sought opportunity shortly after the arrival of his uncle Deel (Josh Lucas, exuding menace with every movement), an ex-con who still bears a grudge against his brother for stealing both his woman (the boys’ mother) and his inheritance of Mexican gold coins that, according to their father’s fantastic stories, had initially belonged to the River Styx’s ferryman.

Deel’s simmering bitterness and jealousy inevitably culminates in tragedy, propelling Chris and Tim on a journey through the heart of rural Georgia that, as dramatized by Green and shot with naturalistic exquisiteness by cinematographer Tim Orr, is nothing less than a desperate getaway from the regrets, envy, economic destitution, and animosity that grip these two boys. Green’s attention to character elicits intense performances by Bell and Lucas, and his direction—though still slightly too reminiscent of Terrence Malick (note the upward shot of the twinkling sun through the trees borrowed directly from The Thin Red Line)—has the graceful, attentive feel of an observer rather than an orchestrator. Punctuating zooms and leisurely panoramic tracking shots (aided by a delicate Philip Glass score) amplify the harried characters’ emotional distress, and the director’s sympathetic depiction of working-class Southerners is devoid of demeaning caricatures.

Moreover, his film’s rich soundscape of natural noises (birds chirping, twigs snapping underneath feet, wind coursing through trees) creates a palpable sense of enveloping environment. For all its entrancing lyricism, though, Undertow can occasionally prove both unnecessarily oblique (such as Tim’s strange, self-destructive behavior) and overly occupied with portentous discussions of demons and hell, and there’s a distinct lack of tension during its cat-and-mouse second half, as the film seems burdened—and a bit peeved—at having to fulfill its obligations as a three-act thriller. But even if Green’s sensibilities don’t prove wholly well-suited for standard genre constraints, Undertow’s atmospheric Hansel and Gretel-inspired fairy tale never fails to follow its own uniquely somber, pensive path.