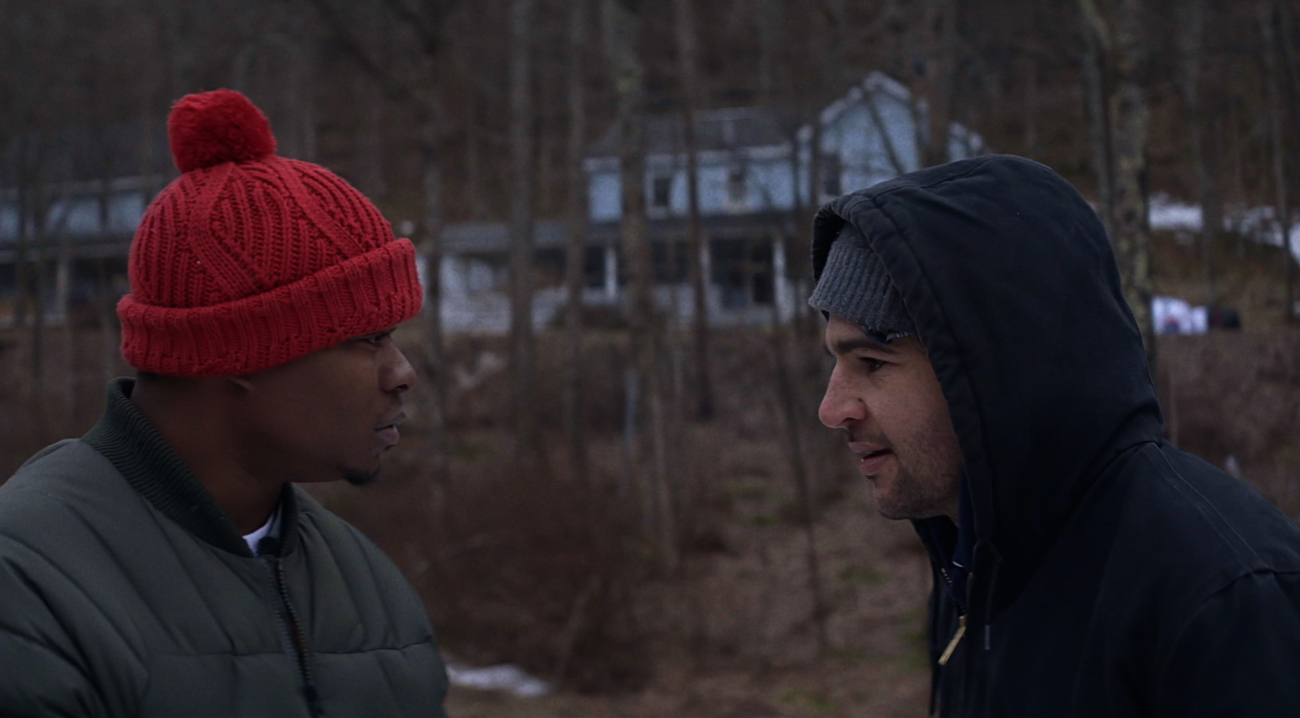 Many films concerned with American racism peddle cartoonish indicators of prejudice, ensuring that viewers are on the same page when it comes to expressions of empathy. For instance, racist cops tend to look the same in cinema, sporting lantern jaws, unfeeling eyes, and ramrod physicality that might alienate even those who’re on their ideological wavelength. Such coding congratulates the audience for its unchallenged complicity with a film’s humanist message, essentially preaching to a choir. Meanwhile, more insidious and nuanced racial tensions—the sort that were so beautifully articulated by, say, Ralph Ellison and James Baldwin—are left unplumbed.

Sebastián Silva’s Tyrel is a bracing and disturbing exception to this cultural norm, as it homes in on the ineffable signals and micro-aggressions that people of color are conditioned to instinctually parse. The film follows a group of men on a party weekend in the Catskills. Most of them have been getting together for years and speak in a volcanic, ball-busting shorthand, though this code of camaraderie is challenged after one of the men, Johnny (Christopher Abbott), brings someone new into the mix, Tyler (Jason Mitchell), who’s African-American. Tyler is the odd man out, but is he an outsider for not knowing these people, for being black, or for all or none of the above? Silva expertly mines this ambiguity, investing Tyrel with a rich and visceral unease that cuts to the everyday heart of living in a fraught cultural mixing pot.

Ramped up on the masculine energy that concentrates when a bunch of perpetually intoxicated men hole up in a small cabin, these bros aren’t especially shy about the subject of Tyler’s race. During an improvisatory game, some ask Tayler to talk in a “black accent.” The party is also rife with more generalized tension that could be interpreted by an outsider any number of ways. For one, the birthday boy, Pete (Caleb Landry Jones), emanates the curdled passive-aggressiveness that’s long been Jones’s trademark as an actor. Above all, there’s the roiling hostility of the men’s endless need for escalation, whether they’re fighting with one another, burning religious paintings, jumping in an ice-cold river, or proposing one game after another.

Tyler, a sensitive cook who’s missing his girlfriend, and who’s disconcerted by this maelstrom of symbolic warfare, feels as if he’s under constant attack, and his unwillingness to participate in many of the games further isolates him. But these guys go after everyone in their orbit, using whatever they have at their disposal, including racial identity, sexual orientation, and financial status. Tyler is the only black man here, but the aggression he encounters is similar to the aggression the men share with one another as a bonding ritual.

These men are, in a sense, at once regressive and weirdly progressive: They don’t treat Tyler with kid gloves, coddling him with condescending euphemisms, though maybe they should, at the very least, allow for his newness to the group. When they beat a Donald Trump piñata to pieces, a new arrival to the party, Alan (Michael Cera), suggests that Tyler must hate Trump more than the rest of them. It’s an awkward and careless statement that further underscores Tyler’s estrangement, yet it suggests an authentic attempt on Alan’s part to empathize with the new guy. And Alan’s bravura changes the tide of the weekend, steering Tyler and the film itself into unexpected waters.

Throughout Tyrel, Silva drops misleading portents of doom that are familiar to films concerned with racism. Landry’s casting here suggests a direct conversation with Jordan Peele’s Get Out, in which he played an exceedingly similar character, and which trafficked in several of the comforting racist stereotypes that Tyrel so studiously avoids. A reference to The Lord of the Flies also suggests, in this context, a foreshadowing of a hate crime that might give Tyrel a cathartic climax, in a way giving the audience an “out” via tragedy.

Viewers will probably watch Silva’s film on pins and needles, feeling desperately protective of Tyler, particularly when he gets terrifyingly drunk on the second day of the weekend, releasing his pent-up frustrations. Ironically and poignantly, this release connects him with the other men, who’ve been engaged in a prolonged act of release all along. Tyler’s drunkenness enables the other men to see his vulnerability—to see him in general. This understanding allows the men to grasp the latent violence of their earlier interactions with Tyler, and so they become what drunk men have often been for one another regardless of their other differences: den mothers.

Tyrel is set in early 2017, before Trump had been sworn in as president, and his election haunts the film as an unmooring disaster. The characters implicitly ponder a question that’s relevant to the whole country: Do we let racism or racial guilt consume and splinter us? The tragedies that often end films concerned with racial strife are truthful yet easy, cumulatively congratulating us on our hopelessness. Silva conditions us for alienation only to follow Tyler as he discovers unexpected kinship, and the filmmaker’s livewire handheld staging gives this epiphany a subtle casualness that’s truthful to the communion of unhinged parties. Silva never indulges platitude, and so the qualified hope of the film’s ending isn’t merely affirming but also miraculous.

Review: Ben Is Back

Review: Spider-Man: Into the Spider-Verse