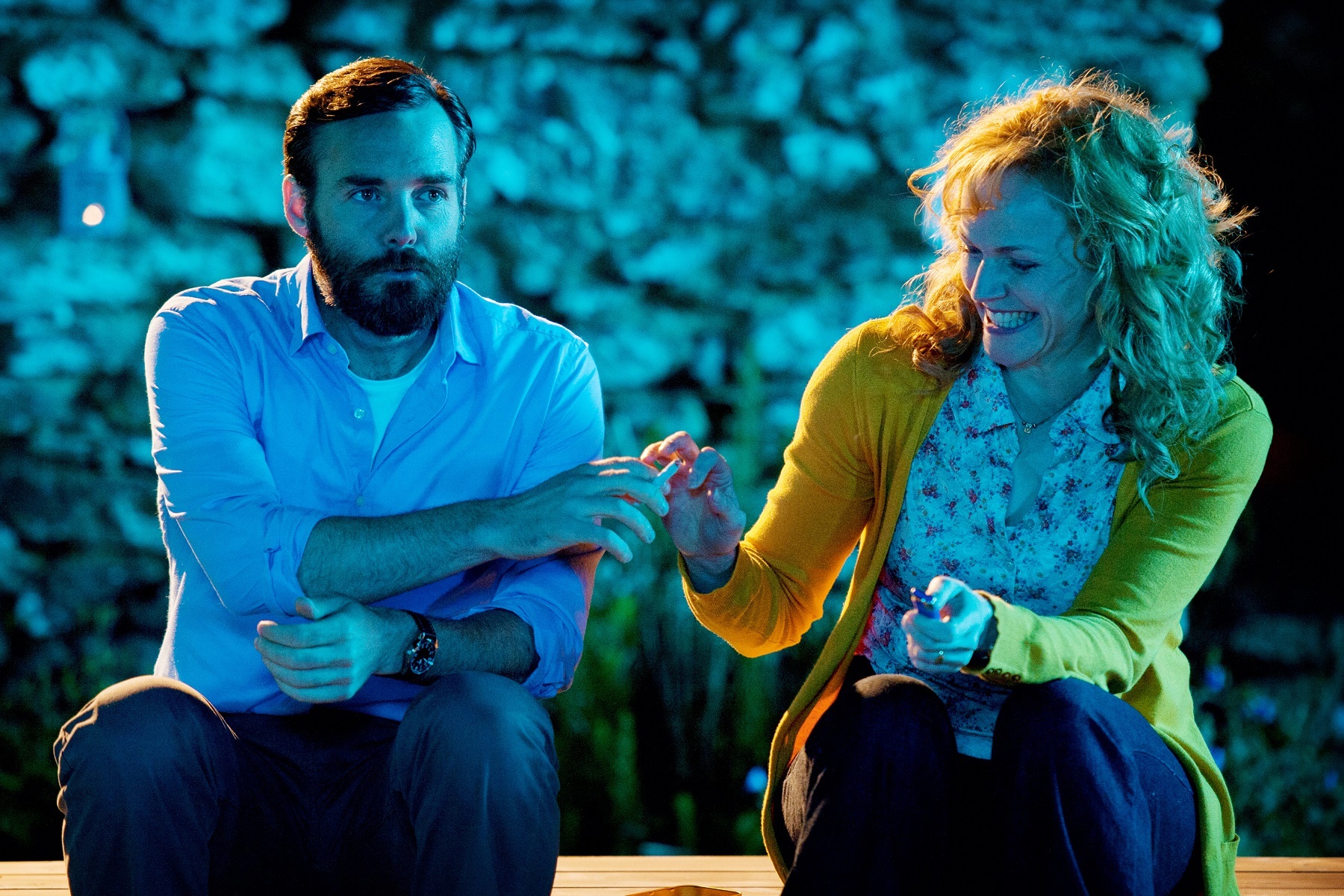 Born in the U.S., but now dividing her time between Los Angeles and Dublin, director Steph Green was nominated for an Oscar in 2009 for her short film New Boy, a sensitive portrait of a young African lad struggling to settle into a new school in Ireland. The theme of coming to terms with a dramatic life change is once again central in her confident, boldly stylized feature debut Run & Jump.

Set in a picturesque Irish town, the film begins with the return to the family stead of Conor (Edward MacLiam), a 38-year-old carpenter and father of two who’s suffered a damaging stroke, leaving him severely mentally restricted. In response, his spirited wife, Vanetia (Maxine Peake), has brought an American neurophysiologist, Ted Fielding (Will Forte), into the household to observe Conor’s condition and interaction with the family for two months. Welcomed with curious fascination by Vanetia and the children, but greeted with some suspicion by Conor’s extended family, Ted soon finds himself becoming inextricably woven into the family in ways he hadn’t imagined. The unusual, shifting dynamic of the triangulated central relationship makes the film constantly engaging on a narrative level, with Green using the inherent awkwardness of the situation to locate nuanced, character-based humor rather than externally imposing it on the drama.

Unlike the static, color-drained aesthetic of Michael Haneke’s Amour, which also explored the drastic effects of a stroke, Green has opted for a busy style to reflect the upbeat, if chaotic, approach that the family adopts in simply getting on with life (intimate, swooping close-ups of the cluttered family home, jump cuts for the jittery Vanetia, and so on). Run & Jump is immediately notable for its bold use of color to inform mood and character, and throughout, Green displays a keen eye for striking compositions which manage to be simultaneously ravishing and symbolic without being assaultive. It’s also notable in the costuming, as characters often appear in scenes wearing clothes with similar hues. Such attention to detail in the coloring extends to a late scene, when, ruefully anticipating the potential end of Ted’s stay, Vanetia sadly tidies away her daughter’s splayed set of brightly colored felt-tip pens—a canny synthesis of theme and style. Indeed, the key effect of all the visual candy is to transpose emotionally difficult material out of the grimly quotidian into a heightened, sensual realm.

Bolstering the use of color is Green’s decision to shoot digitally, then project onto film, resulting in an unusually textured feel in the present-day context where digital projection is increasingly the norm. This aesthetic approach becomes especially notable when contrasted with Ted’s roughly handheld, digitally shot observations, integrated liberally in the film’s early stages. As Run & Jump progresses, Ted’s filming becomes less and less present; this shift signifies both his immersion into the family’s vibrant world and his retreat from clinical observation, becoming more engaged with his own emotions. This academic-as-cold-fish construct is perhaps something of a cliché, but it gives his character a satisfying dramatic arc, not unlike that of James Spader’s buttoned-down, repressed voyeur in Steven Soderbergh’s Sex, Lies and Videotape. Ted’s gradually developing bond with Conor and Vanetia’s children, who instinctively sense the arrival of a new father figure, is especially sensitively observed.

Ted represents an impressive foray into dramatic territory for Forte, who’s best known for his stint on Saturday Night Live. Sporting the resplendent full beard of a true academic, he does the majority of his acting through dolefully expressive eyes. And while MacLiam, in the difficult role of the addled Conor, fully convinces as a frustrated man full of life, but with few ways to express it, it’s Peake who most stands out among the ensemble. With her kind, open face and indefatigable bounce, she centers the film, portraying a strong, vulnerable woman operating under the most onerous of emotional pressures; the film allows her to be tempted by Ted and frustrated with Conor, but never judges or condescends her actions. (Peake is best known in the U.K. for extensive TV work, but this performance could, and should, make her a breakout star.)

Ailbhe Keogh’s script is admittedly flawed, what with its tendency toward melodramatics in its slightly overstretched final third; the tragic incidents pile up and threaten to undermine the delicately crafted mood of the earlier part of the film. Another drawback is the oddly ill-defined portrayal of Conor’s virulent homophobia toward his potentially gay son. We’re left, frustratingly, to wonder whether Conor has exhibited this type of behavior pre-stroke, or whether it’s a subconscious manifestation of his newly infantilized state. Yet Green succeeds in pulling everything around in time for an emotionally satisfying, mercifully non-pat, conclusion. Undoubtedly a name to watch, Green has crafted a debut as fresh, intimate, and compassionate as Lynne Ramsay’s Ratcatcher in 1999.