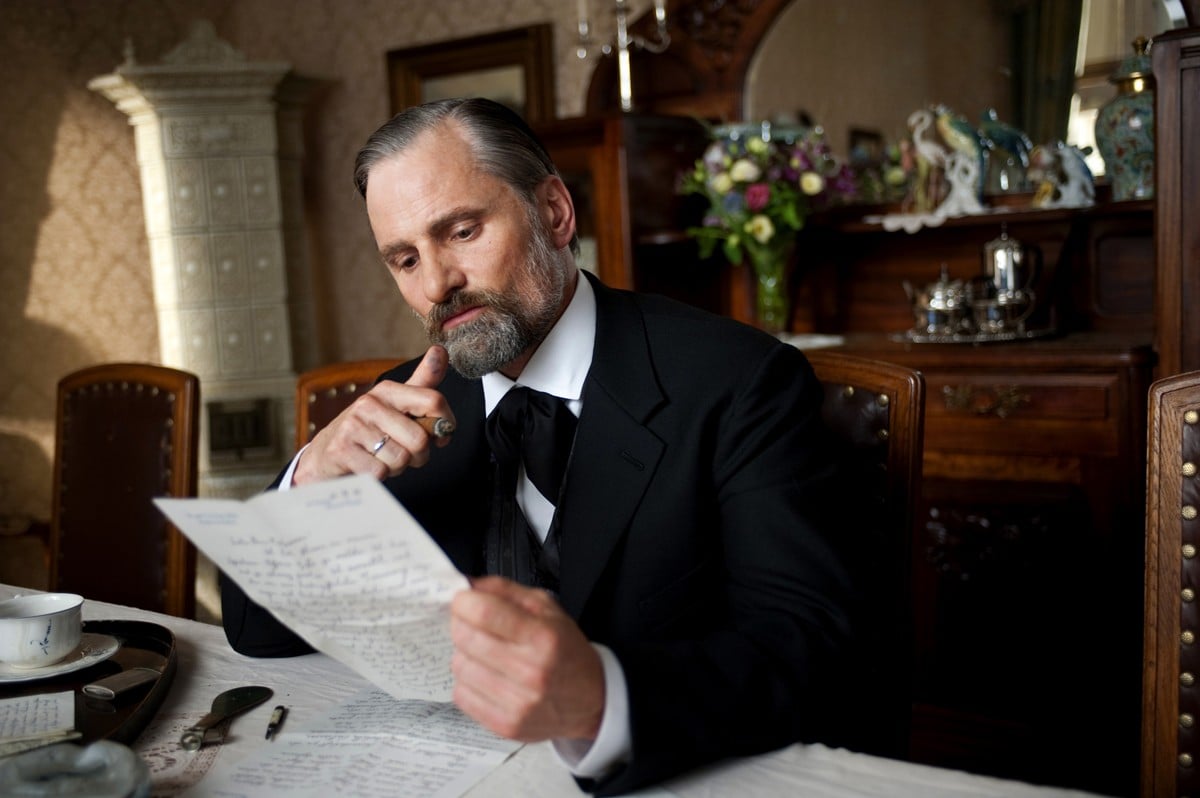 The most classical film yet of David Cronenberg’s classical period, A Dangerous Method’s portrait of the struggle between mind and body elegantly suggests a plethora of urges, addictions, and neuroses continuously churning under its fastidious period-piece veneer. The cerebral side is the relationship between earnest fuddy-duddy Carl Jung (Michael Fassbender) and sardonic silver fox Sigmund Freud (Viggo Mortensen) in the early 1900s; the visceral side comes in the contorted, seductive form of Sabine Spielrein (Keira Knightley), the young masochist whose initial hysteria grows even more provocative to the men of science around her as she comes to match their intellects and challenge the limits of their rationality. Working from Christopher Hampton’s play, Cronenberg outlines the archetypal bonds (mentor and pupil, doctor and patient, husband and wife) that comprise what one character describes as “the smooth workings of society,” and then proceeds to examine—not with Dead Ringers microscopes but with Age of Innocence opera binoculars—the itchy irregularities emerging in the creamy white skin of the characters. If it has a tendency to explicitly state its own themes, the film nevertheless unsettles with its lucid visions of release and repression: One can imagine the director putting the ruthlessly composed final image here side by side with the raucous abandon that closes Shivers, and daring us to tell which one is more horrific.

Possibly reflecting their maker’s own split superstar personality, George Clooney’s films as a director have so far alternated between Coen brothers imitations played at the wrong speed (Confessions of a Dangerous Mind, Leatherheads) and ensemble narratives of idealism and engagement (Good Night, and Good Luck and now this behind-the-scenes look at a political campaign, adapted from Beau Willimon’s play). In The Ides of March, Clooney also stars as a charismatic progressive candidate (complete with Obama-like posters) during an early Democratic primary, but the story’s central conscience belongs to the whiz-kid press spokesman (Ryan Gosling) who believes in “making a difference” with integrity even as rivals insist that the only way to get to the White House is to “get down in the mud with the fucking elephants.” As cracks appear in the candidate’s white-knight armor and the young consultant faces the quandaries of public image versus personal vice, the film shifts from Mike Nichols snap to Alan J. Pakula anguish. As a filmmaker, Clooney shows a knack for widescreen bustle and jostling close-ups, for old-Hollywood lighting pierced by sudden splashes of red, white, and blue, and for cannily integrating his own celebrity image into a vigorous cast that includes Philip Seymour Hoffman, Paul Giamatti, and Marisa Tomei. Had it had a more complex argument on its mind than just “power corrupts,” it could have been more than a solid, slick entertainment.

Where Cronenberg’s films progress toward provocative abstraction and Clooney’s swing from the farcical to the thoughtful, Aki Kaurismäki’s have for the most part played as virtual remakes of the same proletarian fable of sourpuss lyricism. So it goes with Le Havre, a return to the Francophilia of his 1992 film La Vie de Bohème that, while breaking no new ground for the Finnish director, certainly displays his intransigent humanism and fondness for faces weathered by strife, yet still open to the pleasures of a rock n’ roll performance by a grizzled munchkin. Following the friendship which develops between a gentleman vagabond (André Wilms) and an African boy (Blondin Miguel) in the titular seaside Normandy town, it depicts a France full of turbulent demonstrations, gelid oceans, and persecuted immigrants, yet also one of tavern garrulousness and accordion tunes and impromptu communal support—a world where Kafka is read as a bedside story, and a world of miracles. As usual, camera moves, cuts, and gestures are boiled down to the essential, with emotion so concentrated as to give the impression of no emotion at all. The dangers of auteurs refusing to venture beyond their established styles and worldviews are on full display, though it’s hard to resist the absurd and deeply felt spectacle of Kaurismäki muse Kati Outinen speaking phonetic French as a housewife named Arletty.

Review: Bucky Larson: Born to Be a Star