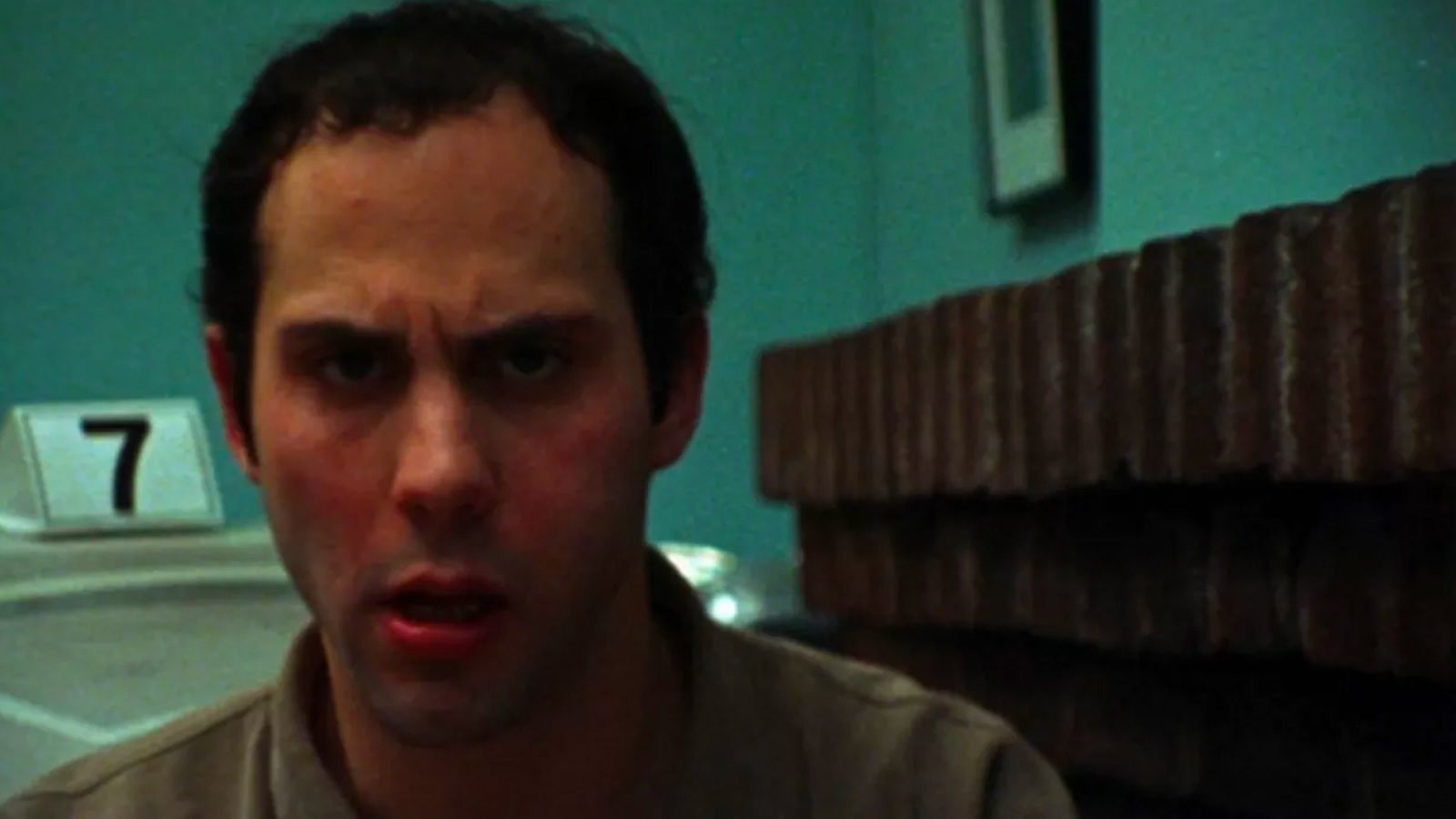 Ronald Bronstein’s Frownland is a film whose synopsis screams, “Avoid at all costs.” It’s a picaresque New York indie about a socially inept, emotionally damaged, stuttering motormouth named Keith Sontag (an insanely ambitious, almost fully-realized performance by first-time actor Dore Mann). The hero endures a crap job selling coupon books door to door, muddles through a dysfunctional not-quite-relationship with a pathologically shy young woman, Laura (Mary Wall), all but stalks a co-worker (David Sandholm) that he wrongly considers a close friend, and fights with his roommate, Charles (Paul Grimstad), a musician-wannabe who mocks Keith’s fractured speech patterns and performs Vangelis-with-a-head-injury soundscapes at top volume. In every surface aspect, it’s a textbook New York underground indie (though shot on 16mm film rather than video), enamored with repellent details (Laura is introduced mid-crying jag, blasting a mucus strand from her nose and reflexively snorting it back in) and sporting just-get-it-done technical credits.

Yet the film’s energy is so peculiar, its vision of socially maladjusted loners so scathingly funny and its creative choices so uncompromising that the result isn’t just memorable, but haunting. Bronstein’s debut feature announces its intent in an opening scene in which Keith stares at a televised clip of Frankenstein’s monster clumsily crushing a violin, then clarifies it with voyeuristic, zoomed-in, handheld pan shots of our inarticulate and ostracized hero stalking around New York, pathetically trying to light a bent cigarette while the analog synth soundtrack plays distorted ooo-EEEEE–oooo riffs you’d expect to hear in a mid-1970s slasher picture. It’s a horror film about everyday life in which characters who fail to recognize their own freakish aspects behave monstrously toward others: Marty by way of Eraserhead.

Bronstein, a projectionist by trade, shot Frownland in sequence, and it shows. The first few minutes—a meandering encounter between the distraught Laura and the frazzled Keith, who fakes empathy while angling to get laid—are rough going. But the film becomes more assured as it unreels. In a therapy scene deep into the film, Keith stutters and grunts through an anecdote about how he always thought his dad had a lush, full head of hair until his mom revealed it was a toupee by yanking it off. The story is the sort of masochistic confession that made Albert Brooks’s early comedies so striking, and the off-screen therapist’s follow-ups take a straight razor to psychoanalytic cliché. (He asks Keith questions for which there are supposedly no wrong answers while steering him toward the only answer he’ll accept.)

But what raises the scene from amusing to exquisite is its staging. It’s played in an unbroken close-up that creeps closer and closer to Keith. The therapist remains off-screen throughout, his questions muffled; he sounds like one of those unseen teachers that used to interrogate Charlie Brown. The cinematography (by documentary cameraman Sean Price Williams) likewise gets better and ballsier. Early on, the interiors of Keith and Charles’s apartment are awkwardly shot, the lighting boringly harsh. Later, the place is lit and shot with more nuance—and when Charles fails to pay the electric bill and the roommates bicker by candlelight, it’s primordially lovely.

Frownland leavens grotesquerie with tenderness. At first there seem to be only two kinds of characters in the film: assholes and their maladjusted victims. But we eventually figure out that this film’s assholes are also maladjusted victims; they’re abused by the same status-mad, beauty-addled society that batters Keith. Keith is such a basket case that his main goal is to get through the next 10 minutes of his life without baffling or offending someone. He’s adopted preemptive groveling as social insurance. (His signature phrase is, “I really appreciate this,” usually spoken to someone who’s treating him like dirt.) But Charles isn’t just Keith’s tormentor. When he leaves the defining context of their apartment, hoping to find a job so Keith won’t kick him out, he’s revealed as a freak himself.

It’s hard to say what’s saddest: the wait-staff application that Charles can’t fake his way through; the subsequent, brief shot of Charles in an arcade, lost in a game of Robotron (!); or the sequence where Charles takes the LSAT to earn a job as a test administrator. Probably the last one. Charles tries to bond with the only other person taking the test that day: a curly haired, agitated, smug fellow who listens patiently to Charles’s complaints about the test’s weird questions, then informs Charles that he had no trouble answering them himself and would like to know why a man who professes to see through the scam of standardized tests would seek a job administering them. Charles is a snot who poses as super-competent, then reveals flaws that make Keith seem comparatively functional. (At least Keith has a job and pays bills on time.) Yet in this scene, you still feel for him because, shades of Keith, he made a good faith effort to connect with a fellow human being and got used as a verbal punching bag. This is the way of the world in Frownland, a film in which power relationships turn on a dime. One scene’s bully is another scene’s schmuck.

Did I mention that the film is as cuddly as a cactus, as charming as an eel? “Look, I’ve tried to listen to you month after month,” Charles excoriates Keith, in a late scene where he really should be kissing Keith’s ass, “and I’ve tried to decipher what you come to me with. But these are unmanageable jumblings that you come to me with, I mean, this mangled syntax, and frankly, I don’t have the energy to continue to meet you four-fifths of the way just to try to figure out what you’re attempting to communicate.” You may feel the same way about Frownland, but it’s a mangled rant worth hearing.

Matt Zoller Seitz is the founder of the House Next Door.

Review: I Am Cuba Is an Enthralling Synergy of Sight and Sound