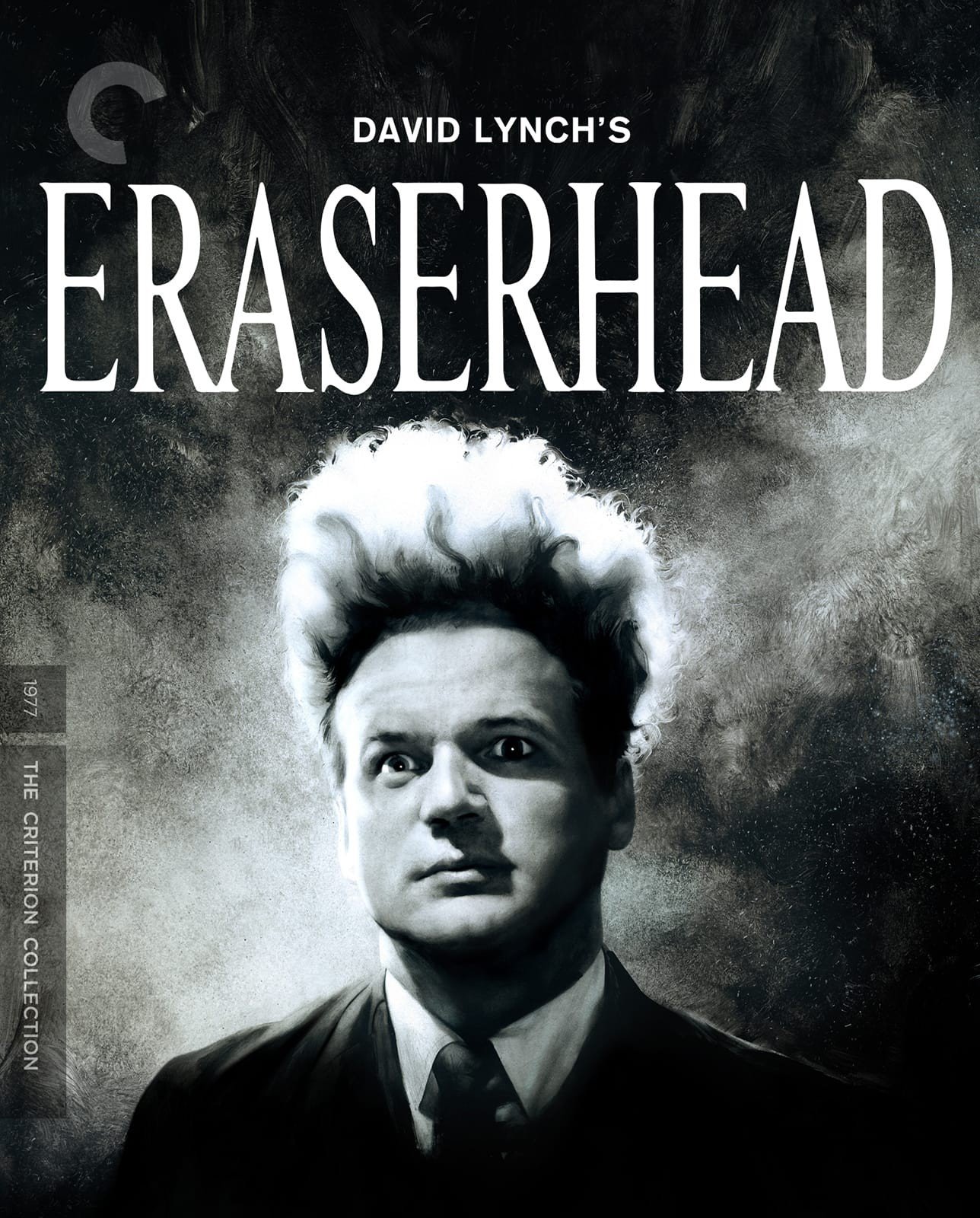 David Lynch’s Eraserhead opens on a superimposition of a man’s head that appears to be floating around in outer space. Above his face is an orb that resembles a planet as it might be rendered by a miraculously polished Ed Wood film. It’s charmingly lo-fi, yet poetic and threatening. The camera pushes closer into the orb, tracing a valley within it that recalls the terrain we’ve seen on footage of the moon landing. Within that valley is a dark opening that suggests a portal. The camera pushes into it, revealing a figure that appears to be eaten up with disease, sitting in an ancient chair gazing forlornly out of a broken window. There are levers at this figure’s side, and soon we see the floating head again, still drifting through a realm of vast darkness. The figure pulls the levers, and a superimposition of a creature tumbles out of the head’s mouth. There are other shots that suggest water flushing (which will recur throughout the film), and soon we’re pulled through this dream space into a comparatively familiar industrial landscape. There, the head’s revealed to belong to a mild-mannered man named Henry (Jack Nance), and he seems to be even more humbled by the big, noisy factories than by his brush with a presumable god.

The images are so alien and frightening, yet so rapturously beautiful, that you feel as if you’re glimpsing the primal id of cinema. There are obvious inspirations informing Eraserhead, but it’s clearly the work of an original and almost spookily confident talent. Collaborating with cinematographers Frederick Elmes and Herbert Cardwell, Lynch fashions a black-and-white film that’s rich in velvety shadows that always appear to be on the verge of swallowing the characters alive. A girl across the hall (Judith Anna Roberts) comes over to Henry’s cramped one-room apartment to seduce him, and, at times, the inviting-haunting siren whites of her eyes are the only visible thing in the frame as her face swims in and out of the prevailing darkness. She’s the very first of the many dark angels of Lynch’s cinema. And, like all the others that subsequently followed, she represents a bored conformist’s promise of escape from a life of obliging drudgery. The moment she and Henry hook up, sinking into his bed, which has become a pool of their primordial plasma (an image that might’ve informed the sexualized sacrifices in the recent Under the Skin), is unexpectedly poignant for its suggestion of sex as an act of attaining brief, warm refuge.

The whites often dominate the world that Henry seeks refuge from. Mary X (Charlotte Stewart), Henry’s girlfriend as well as the mother of his monstrous child (which suggests the fusion of a gourd, a skinned rabbit, and a fetus, and which almost certainly informed the chest-dwelling creature of Alien), is often shot in harsh lights that encourage us to instinctively sense that she’s troubled—or exposed—even before it becomes an explicit plot point. The whites also cut the black of the image into sharp expressionist angles that bring the terrifying yet soothingly shapeless dimensions of the darkness into inescapable clarity, emphasizing the purposefully stifling décor that seems both indifferently ratty and inhumanly precise in equal measure: the mounds of dirt in place of plant pottery, the perfectly geometrically imperfect lamp shades and door frames, and so forth. These elements seem timeless and remarkably specific at once, suggesting the hypocrisy of classic 1950s Americana symbolism as updated for the rootless, disenfranchised post-Vietnam male of the 1970s, with a dash of The Twilight Zone’s inventively threadbare set design (as overseen by Cocteau or Vigo) for spice.

The sound design intensifies the images’ irrational majesty. There’s a profound sense of literal, and of figuratively lonely, coldness in this film—an impression that’s fostered by the whites of the image and then affirmed by the unceasing sounds of wind blowing and of industrial machines clinking and clanking. There’s always something aurally going on, and, while the sights are occasionally reassuring, the noises and music are dependably, unrelentingly bleak. Even the most relaxing of the ambient effects—a kind of intangible mechanical white droning that suggests slumber at the bottom of a belly of a robot whale—is charged with malevolency. We never see Henry at work, but the soundtrack hints that work is never far away, perhaps hounding and watching him in a Kafkaesque fashion that’s reminiscent of Charlotte’s hectoring before she abandons him altogether in a betrayal that’s later echoed by the girl across the hall’s own eventual rebuffing. A sense of desperation gradually escalates and an awareness of Henry’s need for just a piece of space, of solace, expands.

For all the adulation that Lynch justifiably enjoys for his formal and tonal audacity, there’s a side to his work that’s somewhat under-heralded: its earnestness. The boy-scout character of the filmmaker’s interviews is almost certainly shtick, but there’s an organic despair to his movies that grounds even his wildest impulses in a fairy-tale directness that correlates with the shrewd yet wide-eyed persona that Lynch offers his public. All of Lynch’s films are about innocence and idealism corrupted, and everything else stems from that confirmation of futility. Henry’s brought to madness over the frustrations of caring for his sick, deformed child, and his hopelessness is pushed to a breaking point that redefines his view of himself and sends him spiraling into new dimensions, following a rootless path of damnation that’s strikingly similar to the territory later treaded by the heroes of Blue Velvet, Twin Peaks: Fire Walk with Me, Lost Highway, and, especially, Mulholland Drive and Inland Empire. Eraserhead is an extraordinarily raw film that’s not so much an announcement of its filmmaker’s obsessions, but a complete, intimate, and heartbreaking fulfillment of them. You watch this detonation of the nuclear-family arrangement and wonder if Lynch had to explain himself to his own loved ones afterward.

The image is scrubbed of grain, as well as the other casual little flaws that you might reasonably expect of even a good transfer of a low-budget 1970s film. Most importantly, the visual textures, which are particularly integral to David Lynch’s work, haven’t been compromised or softened with visible side effects of post-production tinkering. If anything, the film’s even more vividly hyper-textual than before, as you can make out the hairs, pours, splinters, dirt, fibers, and metals that so memorably define this cinematic world. The blacks are deep and luxurious, suggesting almost oceans of implicative shadow within the frame, and the whites are alternately sharp and soft to resonant and painterly effect, accentuating the film’s occasional resemblance to the work of artists as varied as Dorothea Lange, Andy Warhol, and Diane Arbus. The dense and inventive sound mix is also superbly rendered. Rich and densely percussive, not to mention bell-clear, the rumbles of the machinery are seamlessly blended with the purposefully tinny diegetic music and the low-throbbing score to create a sonic tapestry that’s stunningly evocative and nuanced. It’s also worth noting that the short films have all been attentively refurbished to similarly transformative effect.

A nearly perfect supplements package emphasizes the work that went into it Eraserhead, as well as the various creative evolutions that led to its conception. Six of Lynch’s most widely distributed short films are included, with accompanying video intros by the director explaining the context of their creation. Many of them are technically raw (the formal leap that Lynch took with Eraserhead really is astounding), but the first five show an artist working through preoccupations that would come to define his career, particularly The Grandmother, a poetic and disturbing exploration of domestic abuse that’s nearly a masterwork in its own right. (The sixth film is the director’s eerie contribution to the anthology Lumière and Company.) Lynch’s feature-length 2001 documentary “Eraserhead Stories” provides the closest thing that fans are going to get to an audio commentary, and perhaps it’s even better: Shot in spare, gorgeous black-and-white hues that are intended to complement the aesthetic of its subject, it follows Lynch as he discusses Eraserhead’s making with an attention to nuance and detail that elevates the doc to the realm of intimate concert art. Also included is a variety of new and archival interviews that cover virtually everything under the sun from Lynch’s struggling AFI days to the film’s five-year shooting schedule to the director’s rigorous attention to set and lighting detail. Rounding out the package is an excerpt from Chris Rodley’s 1997 book Lynch on Lynch, the trailer, and a helpful television calibration tutorial to ensure that you’re watching films with the right degree of brightness and contrast.

This “dream of dark and troubling things” receives a gorgeous and exacting transfer that should surpass even a prickly cinephile’s greatest fantasies.

Blu-ray Review: Bob Fosse’s All That Jazz on the Criterion Collection