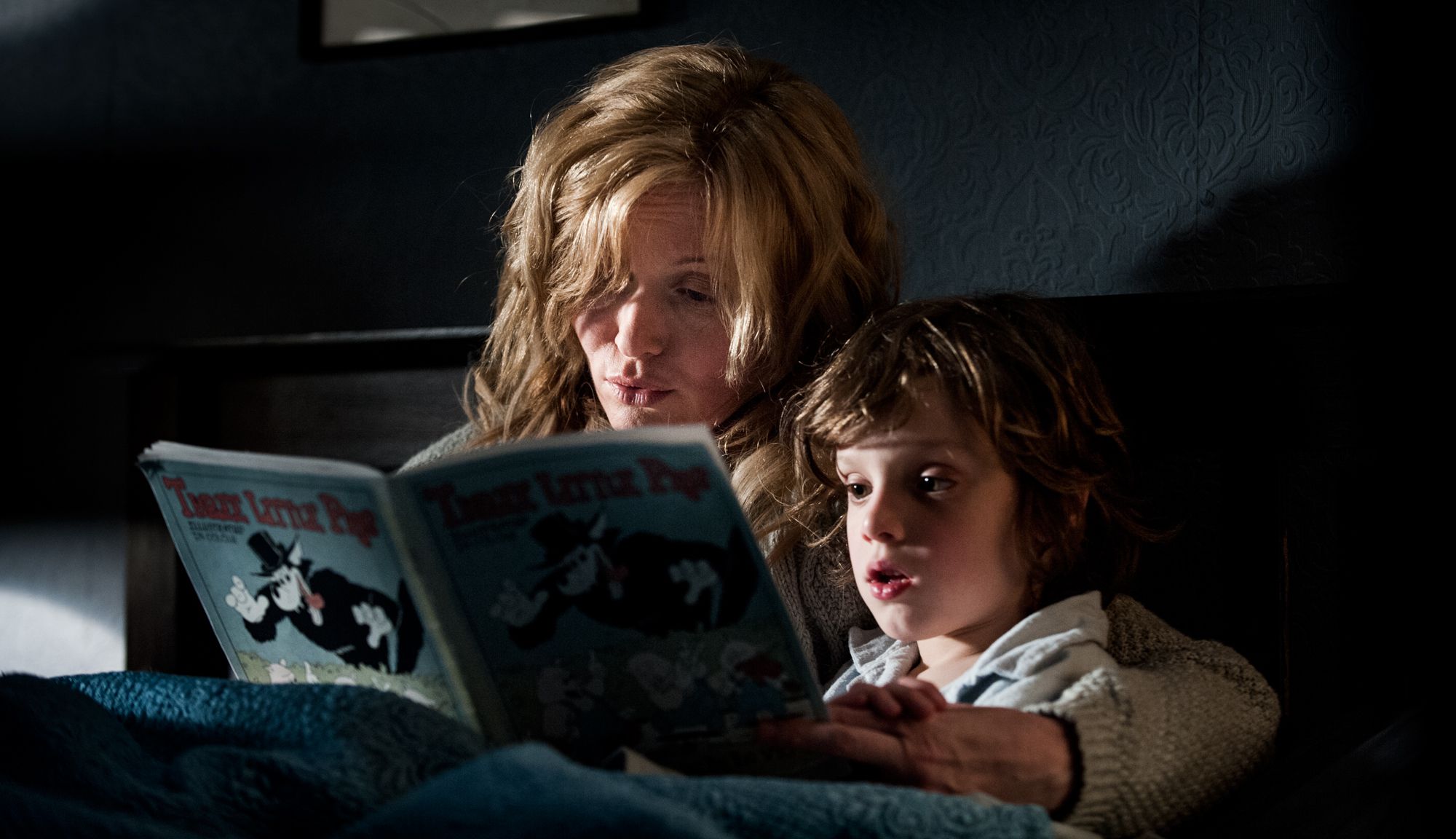 Jennifer Kent’s feature debut, The Babadook, begins on a familiar note. Amelia (Essie Davis), a young single mother, starts awake from a dream recalling the car accident that killed her husband, returning to the more quotidian nightmare of her waking life: raising her socially maladjusted, inexplicably aggressive six-year-old son, Sam (Noah Wiseman), on a caregiver’s income. The usual plot elements start accumulating quickly: the beleaguered and dysfunctional family unit in a large shadowy house; the supernatural interloper summoned via an artifact (in this case, a creepy children’s book called Mister Babadook); the odd, bug-eyed child. It’s all in place, down to the spooked pet and nocturnal thuds.

However, as the film gathers steam, it becomes thrillingly apparent that this seemingly rote setup is in service of an astonishingly assured experiment—a two-way prism of narrative layering that draws out its leads’ fractured psyches and reflects them in the jagged remnants of the genre trappings we’ve been conditioned to expect. It’s a shattering psychological study whose supernatural aspect is a mere catalyst or perhaps even misdirection.

None of which is to imply that the film fails to register as horror. It pegs the establishing mood at an eerie thrum and slowly escalates it to the sustained shriek of Grand Guignol madness that’s the third act. For all her upending of horror templates, Kent acknowledges the tropes first, steeping The Babadook in a century of filmic fantasy and re-appropriating genre iconography as manifestations of the characters’ intensifying dread. Early on, the crisp compositions and washed-out cinematography conjure the cold, foggy atmosphere of classical haunted-house stories like The Innocents, but, as things go south, skewed Expressionist angles reframe the drab house into what Lovecraft would call “non-Euclidean geometry.” And images from the work of Mario Bava and Georges Méliès flicker across Amelia’s old television set, casting a sickly cathode ray glow over her increasingly sleepless nights.

When the Babadook itself appears, it’s a delightfully rough-at-the-edges marvel of stop-motion and puppetry—an analogue grotesquerie in the cutout animation style of Michel Ocelot and Lotte Reiniger. Scariest of all is Davis, whose committed performance graduates from the tired fragility of Mia Farrow in Roman Polanski’s Rosemary’s Baby to—in an awe-inspiring mid-film reversal of character dynamics—a less camp version of Piper Laurie’s deranged matriarch from Brian De Palma’s Carrie. These callbacks are fitting; Amelia is a new iteration of the tormented female protagonists synonymous with ‘60s and ‘70s horror, the era Kent most consistently channels. To this end, The Babadook often feels like a compression of Polanski’s “apartment trilogy,” minus the sardonic male perspective.

Yet, for all these cinematic connections, the film is female-centric in a way the horror movies of that period (or any other) rarely are. Its horrors go beyond any single raggedy phantom, reaching back to the primordial fear of death and loss: of a child, of a loved one, of one’s own sense of self. All this distress is reshaped in the context of single motherhood, with the introduction of a further, perverse wrinkle in an early reveal that—spoilers herein—Amelia’s husband died driving her to the hospital to deliver Sam. Every subsequent day alone with Sam—the biggest reminder of (and, ostensibly, reason for) that premature bereavement—leaves her torn between equally debilitating extremes of love and resentment. Manipulated expertly by Kent, we can never be sure whether the Babadook is real or just a subjective representation of a mind unraveled by that tension. Nor is it ever clear which option is more terrifying.