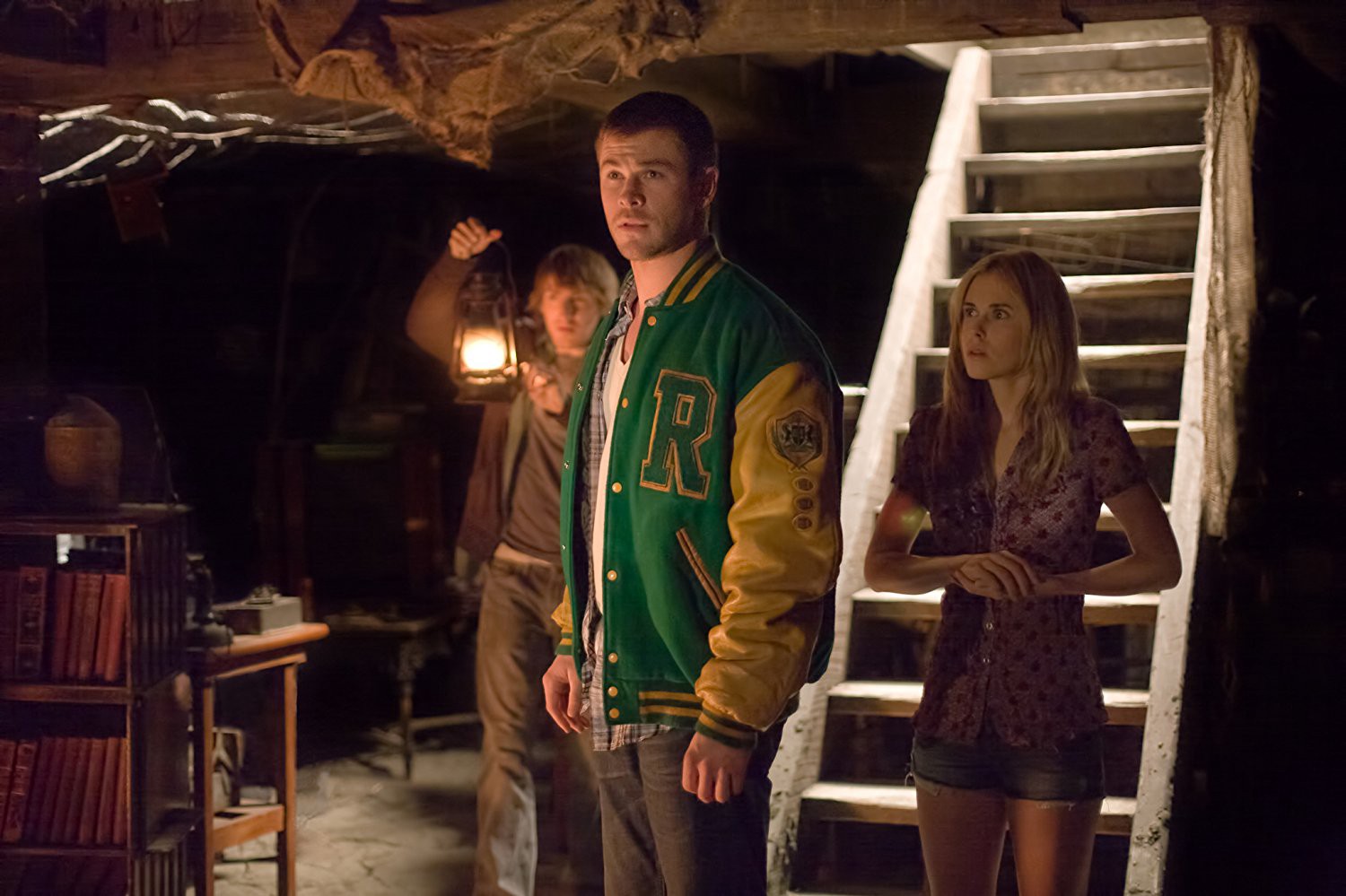 Horror cinema subversiveness need not preclude actual horror, a fact that’s unfortunately lost on The Cabin in the Woods, a brainchild of writer turned director Drew Goddard (Cloverfield, Lost) and co-writer Joss Whedon (Buffy the Vampire Slayer) that sets aside actual scares for what’s-going-on suspense and diminishing-returns cleverness. Genre aficionados both, Goddard and Whedon are interested in playing with convention in slyly self-conscious ways throughout this collaboration, embracing clichés while reconfiguring them in ways that are both surprising and, more fundamentally, speak to the relationship between horror filmmaker and viewer. It’s a potentially exciting endeavor that reaps initially intriguing rewards, as the early sight of apparent government agents Steve (Richard Jenkins) and Richard (Bradley Whitford) discussing mundane everyday stuff while prepping for work in a steel subterranean facility immediately implies—especially thanks to the abrupt, jarring full-screen title credit that ends the scene—that the forthcoming material will be more than it initially appears. What that might be, however, remains shrouded in mystery once attention turns to college student Dana (Kristen Connolly), her suddenly blonde BFF Jules (Anna Hutchison), her studly boyfriend Curt (Chris Hemsworth), his nerdy-hunky friend Holden (Jesse William), and stoner Marty (Fran Kranz)—typical horndog types travelling out to Curt’s cousin’s remote cabin for a weekend of secluded drinking and sex.

The Cabin in the Woods’s employment of stock stereotypes isn’t unintentional, and—crazy spoilers ahead!—after a scene of Steve and Richard taking office bets on the outcome of the kids’ fate (which they’re monitoring on a bank of video monitors, and influencing via piped-in drugs and environmental explosions), it becomes clear that Dana and company have in fact been chosen for the cabin because they each fit respective, familiar roles as the virgin, jock, brain, tart, and partier. As foreshadowed by credit-sequence images of ceremonial sacrifice, their destiny involves being slaughtered in a modernized blood ritual in which the kids—by virtue of their choosing to investigate certain creepy talismans in the cabin’s cellar—select which variety of supernatural creature will be their executioners. In this case, that proves to be a family of “zombified pain-worshipping backwoods redneck idiots,” who emerge from the ground to hunt their prey, all as Steve and Richard cheer on the ghouls in the hope that “the system” will be a success and this ancient rite—which is also taking place, and failing, in other parts of the world, including a Japanese classroom haunted by a Ring-ish stringy-haired girl ghoul—will avert some horrible, unspoken calamity.

Goddard and Whedon’s tweak old-hat formulas with playful good humor, especially in the film’s latter third, when things go terribly awry and an “army of nightmares” proves uncontrollable even for Steve, Richard, and their shadowy superiors. Moreover, their setup proves an initially canny, if somewhat obvious, commentary on the way filmmakers—here symbolically embodied by Steve and Richard, a pair of wisecracking cogs in the machine whose concern for their victims pales beside their obligation to duty and base desires (like Richard’s wish to see a scenario involving a Merman)—reductively manipulate their material in order to deliver basic, predictable drama. The joke, as it were, is that horror filmmakers embrace tired narrative standards as a means of appeasing powerful unseen forces (i.e. the audience) that will revolt if not satisfied in preordained ways—a thematic thread that turns out to be shrewd, as far as it goes. Unfortunately, that’s not quite far enough, since The Cabin in the Woods’s subversive streak only amounts to upending its familiar paradigm by empowering its protagonists and, eventually, having them revolt against pigeonholing and death via a nihilism that never quite rings true.

More problematic, however, is simply that this modus operandi, in which routine blueprints are first followed and then overturned, winds up interfering with actual fear. By calling direct attention to its scenario’s phoniness, The Cabin in the Woods follows its villains’ lead by reducing its characters to mere pawns in a critical-theory game in which their survival or demise is something to be anticipated (since we’re implicitly asked to “figure out” how the film will screw with our expectations) rather than dreaded. There’s no emotion to be felt because, even once they empower themselves, Dana and company aren’t real people but devices in a conceptual stunt, and thus whether they’re felled by a zombie wielding a bear trap attached to a long chain, or eaten by a giant snake, flying bat, or roaring werewolf, is irrelevant—not to mention implausible, given that at least one of the kids has to make it to a conclusion in which someone (here, a cameoing big-time star) explains and attempts to justify this rigged torture-and-pain ritual. In the film’s finest sequence, Steve, Richard, and their co-workers joyously celebrate (flirting, stroking their own egos, talking shop over drinks) while Dana is assaulted on the control room’s big screen. Yet despite such lip service to critiquing its chosen genre, which extends to a punish-the-overlords finale, The Cabin in the Woods ultimately does exactly what it condemns, prizing schematic formula and ingenuity over real terror and, more crucially still, over empathy for those whom it exploits for our scary-movie pleasure.

Review: Salmon Fishing in the Yemen