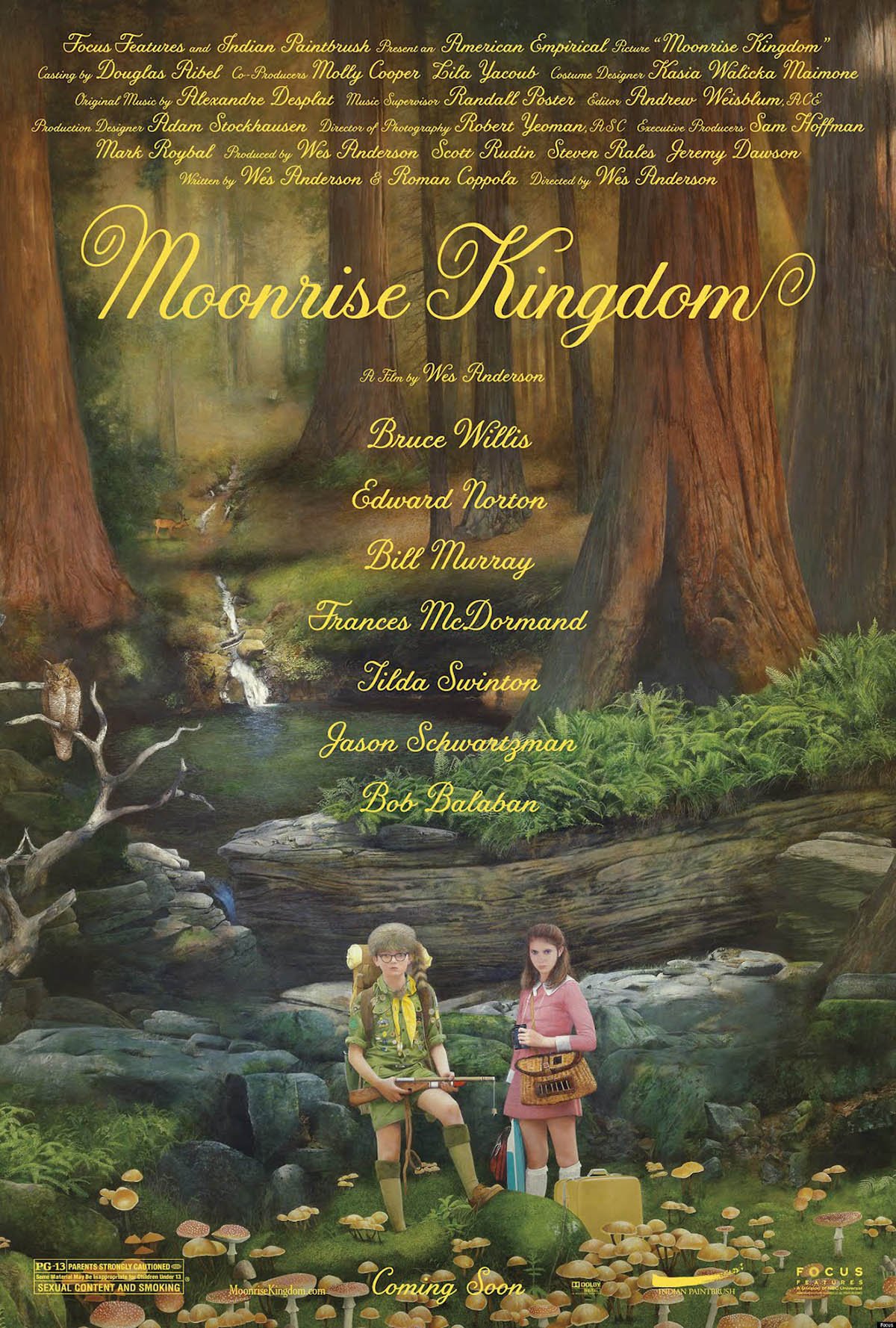 With the poster for his seventh feature, Moonrise Kingdom, Wes Anderson seems to have taken a page from Todd Solonz’s book, and it’s hard to imagine more beautiful results. Graciously ditching the yellow sans serif that’s marked his (puppet-free) features since The Life Aquatic with Steve Zissou, Anderson has opted for an extra-scrolly script, and with the help of artist Michael Gaskell and the fine folks at Mojo, he’s released a transcendent merger of Solondz’s Palindromes and Life During Wartime one-sheets. Such is not to say this new design is an upcylced robbery, but rather a work of whimsy that evokes something pure and commendable as opposed to the same pretentious branding Anderson’s been shoveling at us for close to a decade. This will be one of the best film posters of 2012. Reflecting the awareness and bridling of auteurial strengths that was finally typified with Fantastic Mr. Fox, it keeps Anderson’s frank and characteristic egotism intact, but keenly respects all who find value in his voice without groveling at his altar. It’s a dreamy beauty, impervious to whatever flaws the film may have.

“What kind of bird are you?” Sam (Jared Gilman) asks Suzy (Kara Hayward) at the start of the film’s trailer, and then the duo flies the coop, leaving behind a town of concerned, crackpot adults. It’s highly promising that Anderson has shaped his latest as a kind of reconstituted Hansel and Gretel story, with the wanderers as young lovers instead of siblings. Because unless he’s able to recapture the multi-generational magic of The Royal Tenenbaums, it’s better that Anderson’s work skews young. His sensibilities demand it. Moonrise Kingdom looks to boast an adventure that’s deliciously juvenile, dressed with familiarly obsessive production design and captured in perfectly meticulous compositions. All that fancifulness, all that detail, is communicated in this image, a storybook-style illustration that shrewdly dwarfs its venturesome stars and begs a closer look.

There’s something both traditional and hallucinatory about the Moonrise Kingdom poster, the latter not just because the foreground is littered with mushrooms. Sam and Suzy are rendered innocently enough, but like most of Anderson’s characters, they grace the cover art with a direct stare of half-confident delirium, their viewer eye-contact doubling as the director’s invitation. There’s a lot of possibility at play here, its unsure ends stretching far into the painting’s fertile distance, but there’s melancholy too, not least expressed with that sad cork that dangles listlessly from the end of Sam’s rifle. It would be wrong if something promoting an Anderson film weren’t touched by irony, but here it trickles into the picture instead of flooding it. And that text, that glorious text, whose nearest relative is probably the cursive scrawled across the ads for co-star Tilda Swinton’s I Am Love, further pledges the even flow. Nowhere in the design is it suggested that Anderson has abandoned a bit of what makes his work so singular, and yet, from the top down, there’s a very welcome humility. Listed first, rather than relegated to the bottom, is the oft-ignored crew, who’s given that same calligraphic treatment. And descending lower is that peach of a star roster, whose names hang nicely atop the middleground. For all involved, especially the viewer, the poster is a wistful, generous triumph. It’s firmly inscribed with a director’s stake-claiming signature, yet it reads like he’s sharing the wealth.

SXSW Film Festival 2012: Drew Goddard’s The Cabin in the Woods