Evan Davis: Hey, Dad. What’s up? You good? The Braves are doing well this season. I think that their new starter Mike Minor’s got a shot at the Cy Young, if Dodgers ace Clayton Kershaw can somehow have a meltdown after the All-Star Break. Maybe that’s just wishful thinking. What? Oh, we’re not talking about actual baseball today? Okay, fine, don’t be so snippy about it.

Father’s Day is on Sunday. I don’t think it’s a coincidence that this weekend also marks the 25th anniversary of the release of Bull Durham, maybe the most dad-friendly movie in the history of movies. I was not yet three years old when it first hit screens in June 1988, and didn’t actually see the thing until I was about 12. (You made me fast-forward the climactic sex scenes between Kevin Costner and Susan Sarandon; you don’t know my tastes at all!) But for me, nothing has ever crystallized Bush I-era masculinity more perfectly than Ron Shelton’s comedic gem.

Crash Davis—the burned-out thirtysomething perennial minor leaguer on one last trot around the bases before he sets the minor league home run record—has always seemed like the platonic ideal toward which men strived in the late ’80s. Stallone, Willis, Schwarzenegger, Cruise, and all the other godheads of the period were merely fantasies, never intended to be emulated in any real sense. But Crash, armed with his urbane wit and an endless knowledge of everything from baseball to the correct placement of a garter belt, could have been born out of the roadside bars of North Haven, CT or Twin Falls, ID. He was a man’s man who was anchored in the way that men actually thought and behaved in America at the time. Even his clothes suggested an Everyman with class—both factory joe and Midwestern intellectual.

Of course, Crash’s foil is that wild and wooly young hotshot, Ebby Calvin “Nuke” Laloosh, so delightfully embodied by Tim Robbins. I would even dare to posit that, beyond the personality differences, beyond the mentor/protégé relationship, or even their rivalry as potential partners for the comely English teacher/baseball groupie Annie Savoy (Sarandon), the dichotomy between Crash and Nuke is of two warring masculine types. One is the man of control and reason, the other a slave to his impulses—the Appolonian and the Dinoysian, were Nietzsche a fan of baseball as a metaphor for the American experience.

The movie was a huge hit when it was released, and while Costner had had become a leading man the year before in The Untouchables and No Way Out, this is the film that truly made him a star, and defined his on-screen persona for the next 15 years. In other words, Costner and writer-director Shelton helped shape the image of men in American movies for many years to come. Or am I overreaching with that proclamation, pop? You were 36 in 1988, and a lifelong baseball nut; did you see yourself as a “Crash Davis man”? Or did my young mind enjoy the fruits of Bull Durham too literally?

I agree that Bull Durham is a good one alright, but I’ve got a different angle. Maybe it’s because of the different stages of life in which we found ourselves when we first saw it.

When I first saw the movie, I was all, “Yay! Funny baseball movie with hot sex scenes (which, by the way, you should still fast-forward through)! What fun!” But by the time I watched it with you, I began to see a deeper story. I see it as a tale of two people that have been fighting the coming of maturity. The movie is about the relationship that emerges between Annie and Crash. They are products of the “eternal youth” attitude that sprouted in the ’60s and ’70s. Crash is still playing a young man’s game, trying to reach “The Show,” even though it’s beginning to be apparent this may never happen. Here he’s in the bus leagues, trying to get a young pitcher with enormous talent mentally ready for the big time, and he’s despondent, grumpy, and cynical. Annie, meanwhile, is trying just as hard to stay young by recruiting the season’s young stud. She looks for a pattern: someone young, horny, and dumb while convincing herself that she’s making them self-aware and worthy of her affection for that short window. While Nuke has his own arc of maturity, it is his role as the young pitcher/stud that serves to bring Crash and Annie together. One of my favorite scenes is the speech Crash gives when asked what he believes in. At its conclusion, Annie utters an almost perfect George Takei, “Oh my.”

The rest of the film is Annie and Crash finally realizing that eternal youth is a sham, that there’s an energy and strength in a mature relationship that can’t happen in close encounters of the brief kind. It all wraps up in the final scene, my favorite, when they both realize that maybe, sometimes, if you are very lucky, the meaning of life is as simple as sitting on a porch swing with the exact right person watching the rain. We should all be so lucky.

Evan: I think we both know that no one named Evan ever amounted to a hill of beans at the plate. But that’s sweet of you to say.

A very interesting point about Crash’s actual lack of maturity. As a kid, it’s easy to see the older generation as one possessed of wisdom, when in fact the baby boomers constantly attempted to stave off the inevitable—namely, acceptance of growing old. Boomers not only espoused a new liberal ideal, but also cast it off for the superficial comforts of the corporate sphere. It’s the zeitgeist that gave us Carter, Reagan, and The Big Chill. But whereas Lawrence Kasdan’s pretentious nonsense paints an idealization of selling out, Shelton wants to show how both the childish dreams of youth and the demands of an average existence are both foolish. By film’s end, Crash and Annie are neither suits nor two people denying the approach of middle age. When you’re a kid, you forget that adults can be human; whereas I saw Crash as a more static foil for the maturation of Nuke and Annie, you saw him just as capable of change and growth as the movie progresses. When we’re kids, we need our fathers to be heroes, but it’s a lot better when we find out that they’ve got flaws, just like us. Lord knows I prefer to learn what not to do from your example, rather than vice versa.

The comedy itself is so lovingly fine-grained as well. Shelton is a master of a tone that evokes the subtle sense of human beings enjoying each other’s idiosyncrasies. Especially when compared to Shelton’s spiritual sequel to Bull Durham, 1996’s golf comedy Tin Cup, Crash, Nuke, Annie, and the colorful supporting characters always sidestep caricature and grotesquerie. One actually misses this kind of approach in 21st-century comedies, where jokes are painted with a Pollock drip instead of a Mânet brush. Every character, from the yes-man assistant manager (a wonderful Robert Wuhl) to the hussy-turned-true-believer Millie (Jenny Robertson) to the Foley-effects-for-the-road-games Bulls announcer, Teddy (Garland Bunting), everyone is both ridiculous and human, emotionally sublime and palpable.

What about the actual playing of baseball? Bull Durham is a rare sports movie that gives a losing team a big winning streak, but doesn’t seem to care whether they “win the championship” or not. From another angle, the movie is a great workplace comedy about the daily drudgery of slugging it out in “A” ball. How realistically do you think they paint the minor league experience?

I think they captured “A” ball pretty well—the long bus trips, the hijinks to alleviate the boredom, the drinking and the heartbreak of having the dream end when you get cut. The latter must be soul crushing, after having gone through level after level starting in Little League, slowly discovering how few make it to the top of the pyramid. Just one more flare, one more ground ball with eyes, one more dying quail can make all the difference. (Growing up in Idaho, I got to see the Pocatello Gems grind it out in the Pioneer League back in the ’80s. Walt Weiss started with the Gems in 1983 or 1984 and is now the manager of the Colorado Rockies after a stellar career as a shortstop. He’s the only one that went on to the majors from those teams, as far as I know.) To show this within a context of humor was well done.

All in all, a pretty good experience for one little movie. Don’t even get me started on The Natural and Field of Dreams.

Evan: I’ll give you Longoria, but we’ll see about Gattis. The kid’s hot, but we’re only in June right now. We got 100 more games to play.

“One more dying quail a week, and you’re in Yankee Stadium.” That’s Crash at rock bottom, realizing that another season’s passed and another youthful talent has made a career he’ll never achieve. That’s what makes the closing scenes of Crash returning to Annie so touching. He’s a man at peace, having achieved a measure of acceptance about his circumstances and wants to carve out his own piece of happiness. He can finally start dancing with the woman he loves.

I don’t think I hold The Natural or Field of Dreams in as high esteem as Bull Durham, primarily because those two films are fully content to indulge the mystical side of baseball—the side that Annie lays out in her opening voiceover. Bull Durham is so great at punching holes in all that gauzy, sub-Carl Sandburg sentiment. The workaday pragmatism of guys like Crash and Nuke serves to humanize the ball player’s plight. They’re just a bunch of egomaniacal jerks who can either treat their jobs responsibly or act like boorish louts. There’s no room in Crash Davis’s life for a slow-motion home run or for a catch in a corn field with ghosts; he’s gotta make it to Asheville in time for the afternoon double-header.

Well, I can’t think of a better way to honor the movie’s 25th anniversary than to have this little chat with you, pops. Even if everything else goes to hell, we’ll always have Bull Durham, and I’ll always love you for that. Happy Father’s Day.

Kerry: Thanks, Evan. This has been fun. I hope you achieve the moment that Crash and Annie had at the end of the film, that moment of contentment and ease that should be the definition of happiness. Knock it out of the park, kid. Oh, and by the way, would it kill you to call, text or email more often? Just sayin’.

Evan Davis’s writing has appeared in Film Comment, The Velvet Light Trap, and MUBI Notebook. He holds an M.A. in film studies from the University of Wisconsin-Madison.

Kerry Magee is a proud father of four residing in suburban Maine. He’s praying the Braves win the division this year. 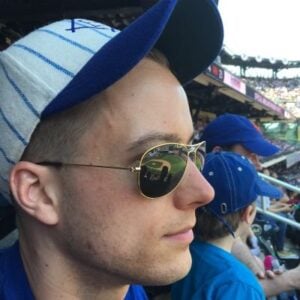 Poster Lab: The Hobbit: The Desolation of Smaug