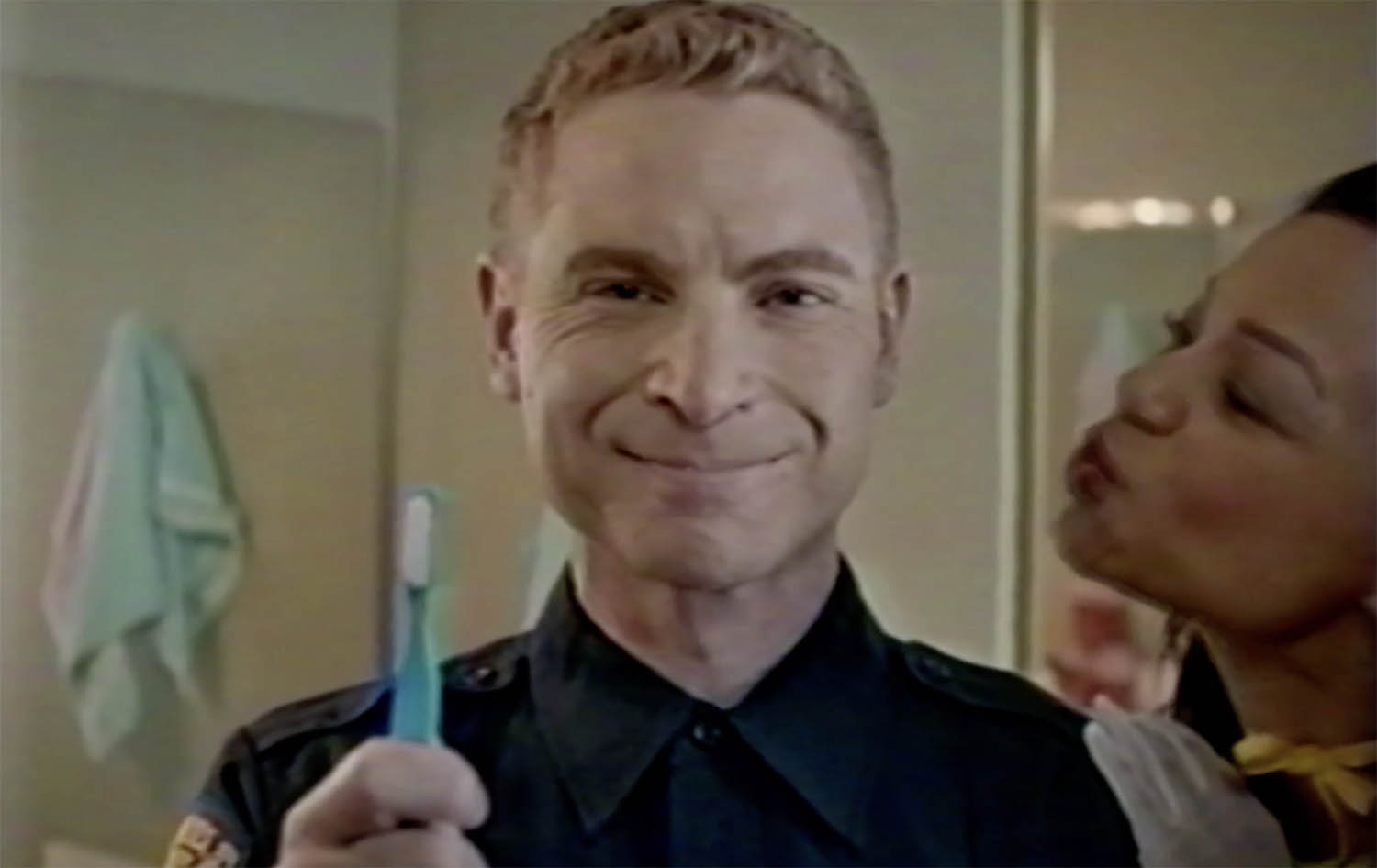 Purporting to be an actual VHS-shot police training video unearthed from the last gasp of the Reagan era, Survival Skills feels like something you’d stumble upon on Adult Swim circa 2014, sandwiched between Too Many Cooks and reruns of Tim and Eric Awesome Show, Great Job! Yet writer-director Quinn Armstrong’s debut feature resists indulging the easy trappings of our current cultural obsession with ‘80s-era aesthetics as it digs into some rather contentious and particularly timely subject matter.

Survival Skills opens on a training guide introducing his lesson on a stagy classroom set. Credited as the Narrator, he’s played by Stacy Keach, a recognizable enough personality to immediately break any illusion of found-footage “authenticity.” But seeing as Armstrong will continue to break the fourth wall and experiment with meta-fictional ideas throughout, Keach, with his never-failing gravitas, becomes the perfect chaperone for this cracked video project.

The Narrator’s first order of business is creating the ideal police trainee, filtering the expected qualities needed for the job through an ancient computer system to end up with Jim Williams (Vayu O’Donnell), an all-American goody-two-shoes who we’ll follow through his first year on the force in quaint Middletown, U.S.A. Speaking in insufferably chipper soundbites, Jim acts and sounds exactly like someone who you’d see in the kind of stilted training video that Survival Skills spoofs throughout. But as we enter Jim’s video world, the joke becomes that he’s almost the only one here who behaves this way, while his hardened partner—curiously named Allison Lohmann (Erika Kreutz), in what must be some kind of inside joke—and the people they encounter are all perplexed by his alien manner. No matter, though, as Jim continues to take his cues from the Narrator’s booming voice, which seems to be heard solely by him.

The line between the staged world and the real one blurs even further when Jim and Allison are tasked with responding to a domestic violence call involving a married couple, the Jennings. After the cops diffuse the situation, Mr. Jennings (Bradford Farwell) assures them that everything is okay while Mrs. Jennings (Emily Chisholm) sheepishly nods along, but Jim can’t shake the feeling that something is off. Defying orders from his superiors (and the natural progression of the training video), Jim begins a quixotic attempt to rescue Mrs. Jennings and her daughter (Madeline Anderson) from a situation that no one but him seems to particularly care about, while the Narrator desperately tries to steer him back on track.

Unlike many a throwback that adopts a retro look and doesn’t offer much beyond hollow non sequiturs (Jack Henry Robbins’s VHYes instantly comes to mind), the film avoids cheapening its domestic-abuse storyline by using its formal conceit to also highlight another absurdity that Jim must confront: the impossibility of positive, meaningful police work within a broken legal (and social) system. The only lesson Jim can ultimately take away from his training is how to not get too involved, while his well-meaning suggestions to Mrs. Jennings that she flee her husband and file charges provoke immediate scorn from the same person he’s trying to help, since she’s already well aware how stacked the system is against her.

While mostly pulling off this tricky balancing act of humor and real-life horror, Survival Skills doesn’t quite go far enough in its critiques, especially in a climate where police-community relations are more frayed than ever. The whimsical mechanics of Armstrong’s world occasionally take precedence over the thematic issues at play, making it strange at times that Jim, who for all intents and purposes is a glorified android (Allison tellingly nicknames him “Robocop”), becomes so obsessed with this one case when he can barely read the room in any other setting. This dichotomy is even more pronounced in scenes with Jim’s hyperbolically domesticated wife, Jenny (Tyra Colar), who, while being the only other person in the film to behave in the same pre-programmed way, is clearly undergoing a stifled breakdown of her own. In these moments, Armstrong hints at but doesn’t fully comment on the correlation between the pressures of police work and domestic violence in police families.

The final act of Survival Skills, however, still intrigues, with Jim’s impossible quandary causing his idyllic existence to come unglued at the seams. Armstrong forcefully dives headfirst into the deep end of the meta pool, staging an aptly surreal revenge climax before Keach’s narrator concludes with a blunt lesson in the futility of policing. It’s a sentiment that ultimately resonates beyond the film’s stylistic posturing.

Review: Black Bear Is an Unnerving Look at the Baggage that Fuels Creation

Review: I’m Your Woman Is an Unresolved Grab at Feminist Revisionism