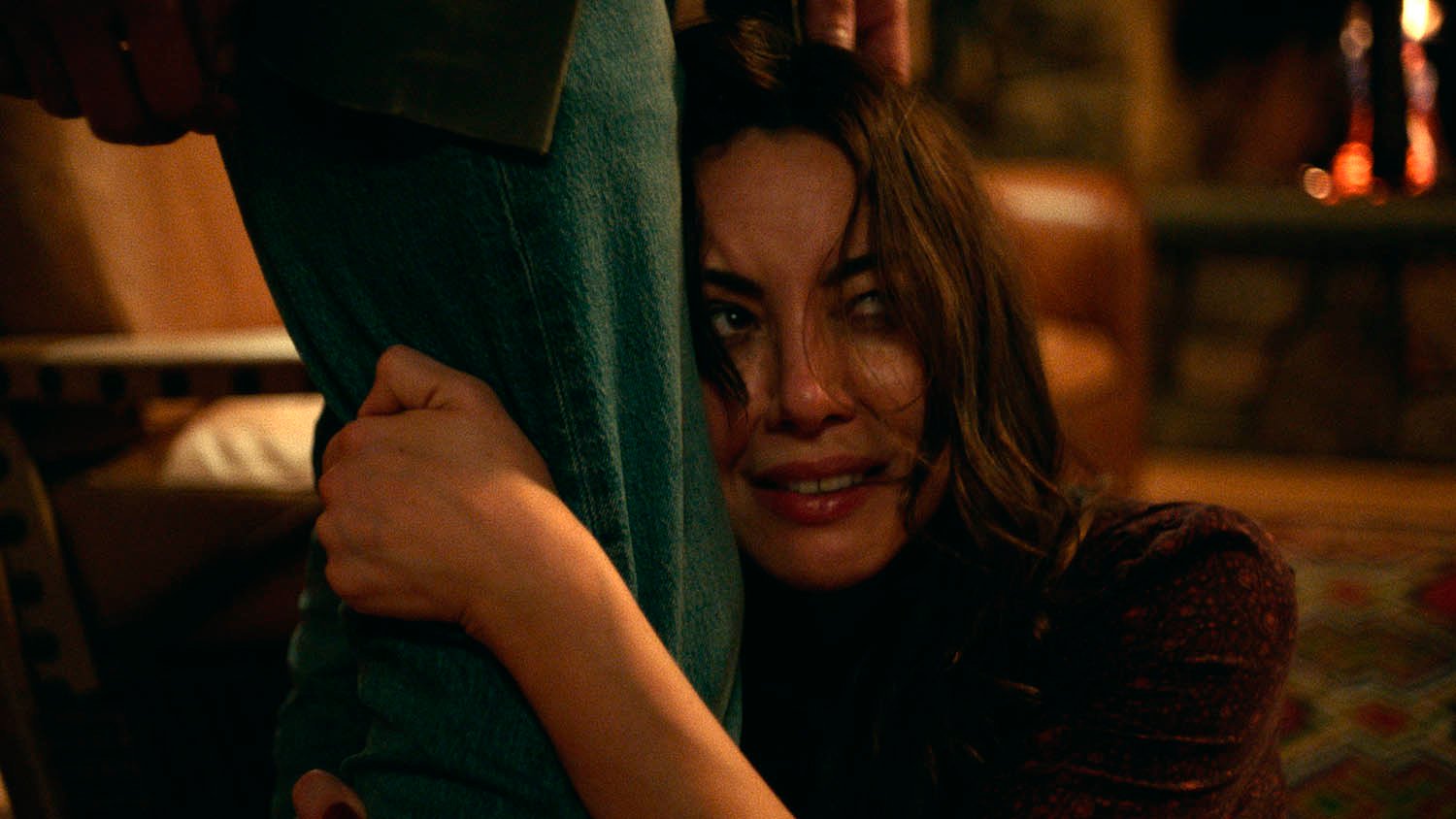 Lawrence Michael Levine’s Black Bear belongs to a long tradition of sexual psychodrama, in which a handful of frustrated and privileged characters hole up in a remote place and exorcize their resentments. This tradition is so venerable that it was parodied by Christopher Guest over 30 years ago in The Big Picture, and there’s also a dark strand of existentialist humor running through this similarly self-conscious film.

Levine casts doubt on his narrative’s sense of reality in the opening sequence, wherein a young woman (Aubrey Plaza) is sitting on a pier in a swimsuit looking out at a vast foggy lake. After a moment, she rises and proceeds into a luxurious home, ascends a flight of stairs, and sits at a desk and smokes a cigarette. Soon, she begins to write in a notebook and the narrative segues into what’s presumably a dramatization of the story she fashions. This scene will be repeated several times in Black Bear, suggesting both a leitmotif and a temporal loop.

We then see this woman, Allison, being dropped off on a road a bit away from the home. Meeting Allison at the drop-off point is Gabe (Christopher Abbott), who immediately sets about flirting with her. It’s the sort of flirtation indulged by aspiring artists and self-conscious intellectuals-in-training, rife with deflections, fake-outs, and challenges to the nature of reality that complement the suggestion that the entire situation is possibly a projection of some kind. Allison and Gabe arrive at the residence to meet Blair (Sarah Gadon), who’s pregnant with Gabe’s child, which wasn’t mentioned when Gabe was probing Allison about her career as a filmmaker and, especially, her relationship status. The trio have a long and boozy dinner and air a variety of grievances, leading to a shocking accident.

Allison, initially suggesting a prototypical Plaza character, seemingly prizes hip detachment above all else, in the process enraging the judgmental Blair, who was hoping for help in persecuting Gabe for various slights. This characterization of Allison is a purposeful trap door—a sop to expectation that Levine detonates. In Black Bear’s first half, Allison is cast as a male fantasy—a sexy, seemingly willing and wandering artist who’s uninterested in Blair’s sermonizing about gender roles. In effect, Allison gratifies the submerged feelings of men and even women who may feel that women wish to be subjugated—feelings that are perversely validated in the moment by Blair’s caustic hectoring, which is realistic of the patter of the blowhard at parties who wishes to bore everyone into submission with rigid political views. The film’s early scenes are so stacked against Blair that one may forgive Gabe’s own simplistic speechifying, though such forgiveness may prompt us to examine our own biases.

Remarkably, the film’s emotional intensity is inseparable from its parlor game-like self-consciousness, especially when Allison’s “cool girl” demeanor is unexpectedly demolished. At its halfway mark, Black Bear effectively reboots itself, switching the core identities of the women, with only Gabe tellingly gaining more power in the process. Suddenly, Allison becomes the vulnerable and rejected party, and Plaza imbues her transformed character with a raw and frenzied anguish. Plaza throws a gauntlet to filmmakers who have typecast her in the past, while Levine plumbs the various forms of subjugation that fuel the creative process.

In Black Bear’s second half, the remote house is now a set for an independent film with a plot that roughly re-stages the earlier clashes between Allison, Blair, and Gabe, who are now reimagined as two actresses and the director, respectively. The film thusly expands beyond the confines of a chamber play to include a micro community, with sustained, confidently intricate set pieces—reminiscent of the game-show scenes in Paul Thomas Anderson’s Magnolia—that explore the exhilaration and terror of corralling dozens of working parts and personalities to create something palatable for audiences. Both films understand such corralling to thrive in part on exploitation, and in the case of Black Bear, the film-within-a-story-within-the-film is constructed around Gabe’s gaslighting of Allison, which Levine stages with a sense of unnerving intimacy that might playfully echo his own experience working with his spouse, filmmaker and actress Sophie Takal, who’s among Black Bear’s co-producers.

Levine is hunting big game in Black Bear, as the film reflects to varying degrees the influence of dozens of self-reflective film classics, mostly notably Ingmar Bergman’s Persona and David Lynch’s Mulholland Drive. If Black Bear feels too neat, a little too resolved as a game, it may be because the framing device gives us a convenient exit, though even the conclusion isn’t without ambiguities. Given that both stories are sex triangles fueled by exploitation, you may be driven to wonder if Plaza’s writer is attempting to find a way to channel real trauma. Or, perhaps more disturbingly, she’s conjuring it out of thin air, accessing unvarnished pain out of sheer talent and for the hell of it. This coda restores the smug Plaza stereotype to an extent, while alluding to the vast emotional undertow it suppresses.

Review: Soul More Sublimely Mediates on the Pull of Music Than It Does the Afterlife