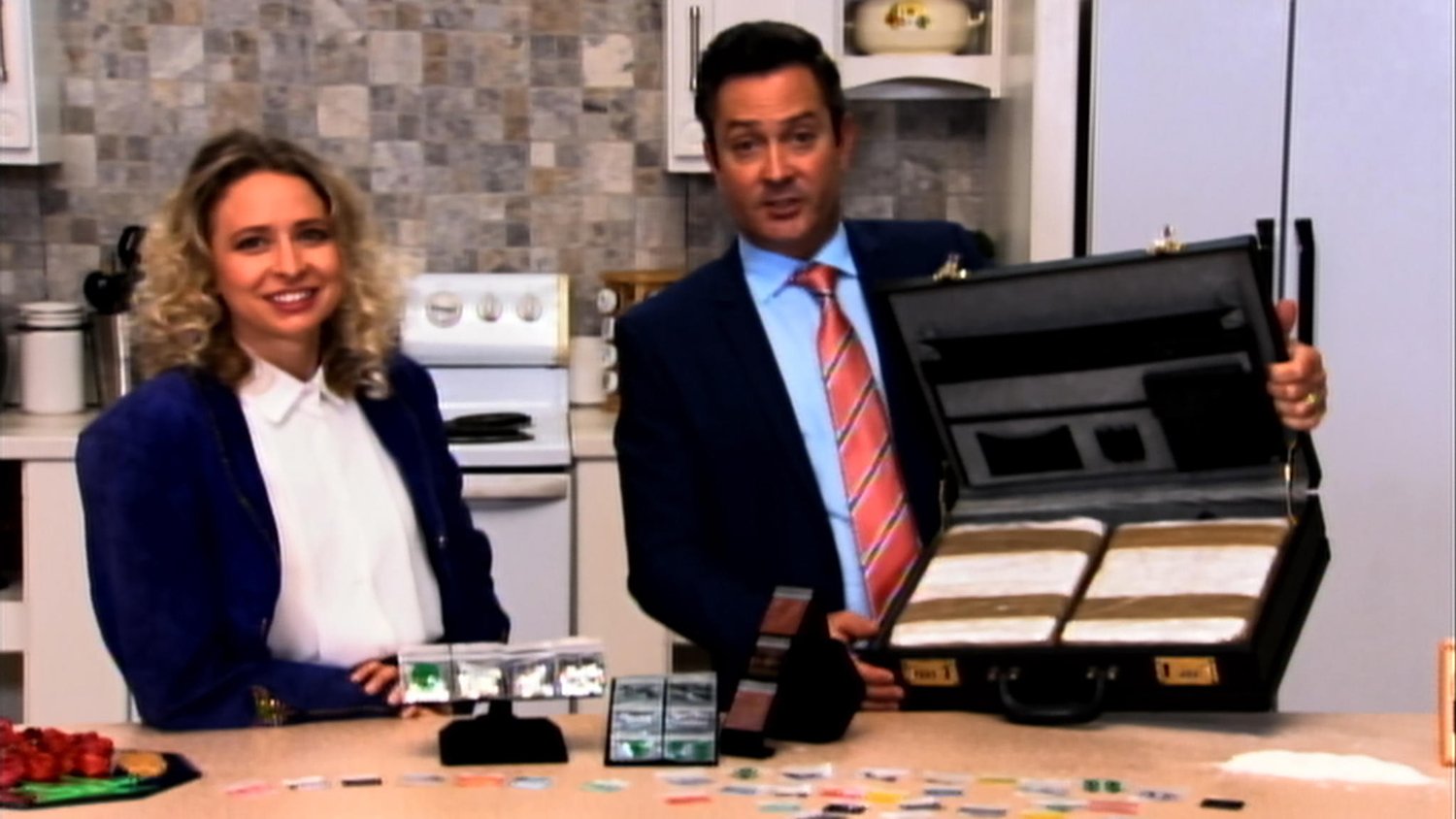 There’s more inspired satire about how television manipulates an audience’s emotions in the original RoboCop’s opening newscast scene than in the entirety of Jack Henry Robbins’s VHYes. Set around Christmas in 1987—coincidentally, the year of the Paul Verhoeven classic’s release—the film opens as adolescent Ralphie (Mason McNulty) has received his first camcorder. Robbins filters everything through Ralphie’s camera, giving the film an entirely home-video aesthetic, and after Ralphie’s father (Jake Head) discovers the device can be used to record live TV, VHYes morphs into a procession of mostly stale sketch-comedy bits that have been taped during Ralphie’s late-night channel surfing.

Throughout, VHYes shuttles from one gag to the next in search of purpose. In one bit, Robbins serves up a parody of The Joy of Painting starring a woman, Joan (Kerri Kenney), whose dry wit and thinly veiled arousal for her work culminates in a painting of her dunking on Dennis Rodman, of which she assures viewers, “There’s moisture. Some of it isn’t sweat.” We also get a spoof of Antiques Roadshow featuring an appraiser (Mark Proksch) who increasingly reveals his lacking aptitude for the position. And on a mock QVC channel, the formerly married hosts bicker as they predominately sell drug paraphernalia disguised as household products.

VHYes is clearly indebted to the gonzo sketch comedy of Tim and Eric Awesome Show, Great Job!, but unlike Tim Heidecker and Eric Wareheim, Robbins homes in on the oddities of people and things as a means to an end, rather than using them as a jumping-off point for unhinged social commentary. The only segment that approaches a distinct comedic take on its material is Conversations with Todd Plotz, in which the host (Raymond Lee) discusses “tape narcissism” with a cultural philosopher (Mona Lee Wylde) who makes obviously prescient remarks such as, “One day the real world will exist to be filmed.” Though this exchange might outwardly suggest an attempt to critique global technological influence, a la Videodrome, the sketch lacks a punchline, let alone insight, beyond the host donning a goofy expression, further revealing how the film is a parade of empty nostalgia for its own sake.

The film offers a reprieve from its grab bag of sketch comedy with a series of musical interludes hosted by Lou (Charlyne Yi), who uses the occasion to introduce bands to her interested but clueless parents. The best of these features Weyes Blood performing a haunting rendition of her 2016 track “Generation Why.” But lest the music linger for a moment in earnest, Robbins concludes the segment with the ironized, faux-Lynchian imagery of a door, isolated in darkness, opening onto Lou and Weyes Blood doing a slow dance.

The film’s climax returns to reality to find Ralphie and his friend, Josh (Rahm Braslaw), obsessed with the documentary Blood Files: Witch of West Covina. The show claims there’s a haunted sorority house on the outskirts of the town where the two live and, predictably, Robbins uses this material to spring the boys out of the house and toward danger, Ralphie’s camcorder footage all the while guiding us through their ghostly discoveries. As in its comedy, the film proves wholly derivative in its horror, borrowing liberally from The Blair Witch Project, Paranormal Activity, and V/H/S and, in this stretch, without even the good sense to heavily ironize it. For all the outrageousness that could be concocted from its overarching premise, VHYes settles much too comfortably into the well-trodden footsteps of other works.