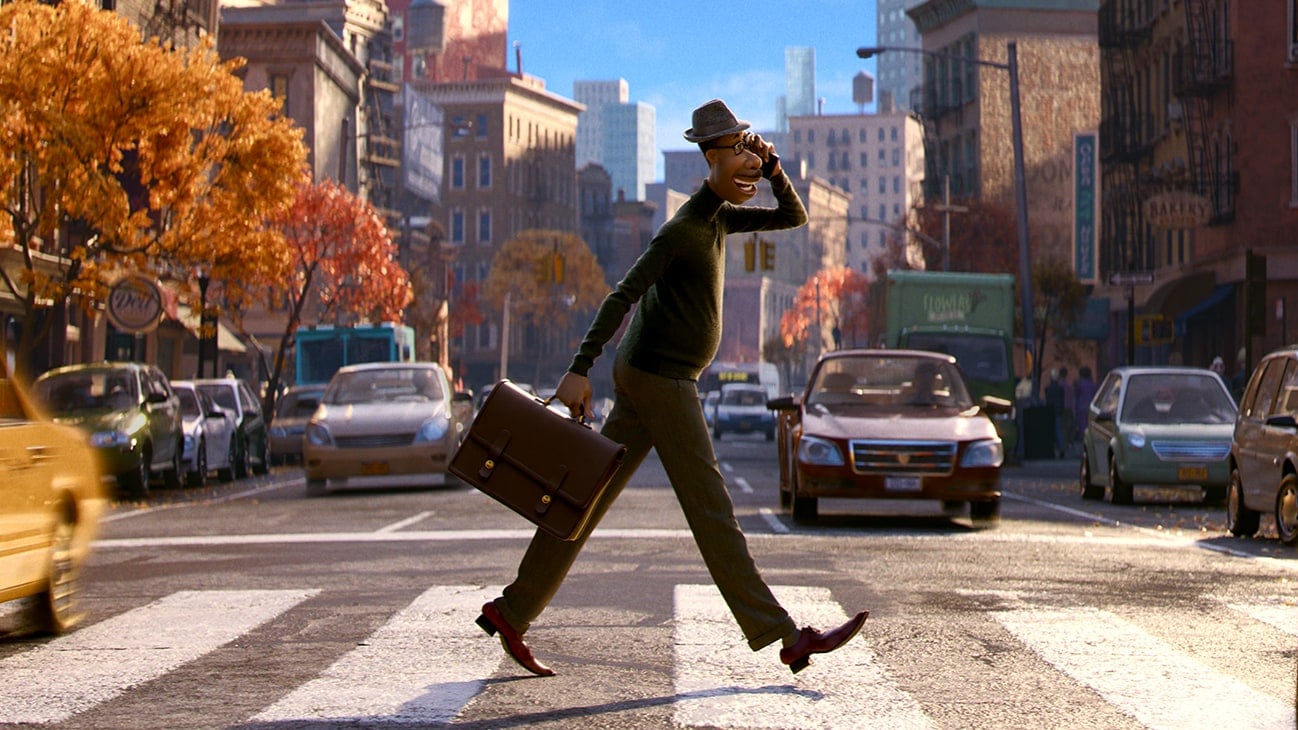 Joe Gardner (Jamie Foxx), the main character of Pixar’s Soul, is a jazz pianist living in Harlem who’s desperate for music gigs alongside his part-time job directing the disengaged middle schoolers in his band class. When the school principal offers him full-time hours with benefits, it feels more like a final surrender than a lifeline. The threat of lifelong mediocrity has tightened its grasp around every corner of Joe’s life. In a brilliant stroke, even the classic “When You Wish Upon a Star” tune that plays over the logo before most Disney movies is heard here as if played by Joe’s out-of-tune student ensemble.

Soul, directed by Pete Docter and co-directed by Kemp Powers, quickly reveals that Joe is anything but mediocre. Hearing melody in the wail of sirens and rhythm in the cacophony of a jackhammer, he has music in his, well, soul. When Joe catches his big break auditioning to play with a pro quartet, headlined by imperious jazz saxophonist Dorothea Williams (Angela Bassett), the film follows him into “the zone.” Not since Fantasia has a Disney film treated music with such reverence, as the seed of all the visual flowering that follows. As pinks and purples swirl around Joe and as his fingers coax unexpected harmonies from the keyboard (Jon Batiste provides the impassioned playing), Soul gives itself over fully to his music.

For these gloriously substantial few minutes, it’s jazz set to animation rather than the other way around. As such, it’s hard not to want Soul to be all about music, not just as metaphor but as the very real engine that drives the film’s characters forward. Music’s extraordinary impact is palpable when Joe’s face lights up as one of his students, Connie (Cora Champommier), leans into a trombone solo, and as Joe’s fingers escape his anxiety in their own improvisatory pursuit. Walk away 15 minutes into the film, at the end of what would make, on its own, a snazzy, sublime short, and you’ll have seen Pixar’s greatest, purest tribute to the arts.

But Joe’s joy, and soon the film’s, is cut short when he plummets down an open manhole, and finds himself—or, rather, his soul, depicted here as a blue-green turnip-shaped substance with glasses and a fedora—on the pathway to the Great Beyond. Refusing to face death, Joe hurtles into the void toward the Great Before, where not-yet-born souls obtain their personalities in a Youth Seminar. Mistaken for a celebrated psychologist, Joe’s soul is assigned a mentee, a cranky pre-human called 22 (Tina Fey) who refuses to cooperate: She’s unwilling, and, so far, unable to find the “spark” that will allow her to be born into a human body. Previous famous mentors have tried and failed (the soul of Carl Jung amusingly tells the difficult 22, “Stop talking—my unconscious mind hates you”), but Joe sees 22 as his ticket back to Earth.

It’s somewhere around here that Soul, co-written by Docter, Powers, and Mike Jones, starts to veer down its own wrong path, abandoning its accessible storytelling, along with that vitalizing jazz soundtrack, for a confusing maze of pseudo-spiritual planes of existence. Besides the Great Beyond and the Great Before, souls can also be in the Zone, where tuned-in artists like Joe sometimes find themselves while still alive, or in a desert of Lost Souls, which belong to people who’ve forgotten how to live (hedge fund managers, in particular, we’re told).

In this ever-evolving terrain occupied by 2D and 3D life forms, the film’s visual adventurousness takes off as contrasting animation styles collide. At the Youth Seminar, flat, geometric figures with transparent features direct the bulbous souls to where they can pick up personality traits (at the Excitable Pavilion, for example). Meanwhile, a New Age-inflected Mystics Without Borders subplot, with Graham Norton voicing the tripped-out Moonwind, adds a daringly vibrant psychedelic color palette to the gentle blues and greens of the Great Before. But as the categories of souls keep expanding, the rules for these overlapping worlds grow foggy, and by the time that Fey’s voice is coming out of Joe’s body in a switcheroo that’s never quite explained, it’s hard not to feel as if the film has lost track of its internal logic.

At the core of the Pixar model is an exploration of friendship within the familiar parameters of the buddy comedy—Joy and Sadness in Inside Out, Sully and Mike in Monsters, Inc., Marlin and Dory in Finding Nemo, all the way back to Toy Story’s Buzz and Woody—and Soul tries hard to plug into the transformative power of friendship in pairing Joe with 22. Despite Fey’s droll delivery, 22, who says she chooses to speak with the voice of a middle-aged white lady in order to be “annoying,” isn’t convincing enough as a fully formed character for their relationship, or Joe’s investment in 22’s decision to be born, to ever matter.

The contours of these worlds seem just hazy enough to land on the safe side of blasphemy; sometimes it seems like the film’s imprecision is a deliberate attempt to draw piecemeal from various belief systems and sidestep offending religious audiences by addressing the presence or absence of higher powers at all. But the viewers that seem most painfully left behind are the ones to which Soul should rightly matter the most: kids. Soul swirls with self-help lingo about finding your spark and seeking your purpose, but that’s almost entirely in the context of Joe’s midlife crisis, a sliver of the human experience with which children seem unlikely to resonate. In a troubling reversal from Pixar films past, which magnanimously welcomed grownups along for a sophisticated ride, it’s kids who will have to do the most heavy lifting to keep up here.

Coco’s take on the Land of the Dead and Inside Out’s representation of depression exemplify explorations of “grownup” topics with a probing awareness of the ways they also touch kids’ lives. For a while, it seems that Soul, in its treatment of the Great Before, will have a similar capacity for digging into big, unanswerable questions with care and clarity. But while most Pixar films pride themselves on presenting rich, fantastical responses to real-world wonderings, Soul keeps conjuring up visions that don’t correspond precisely enough to anything in the real world. It’s not clear whether the film ultimately offers a call to arms to pursue a passion or a warning that creative passion alone doesn’t provide for a fulfilling life.

Review: 76 Days Is a Harrowing Document of the Covid Outbreak in Wuhan

Review: Black Bear Is an Unnerving Look at the Baggage that Fuels Creation