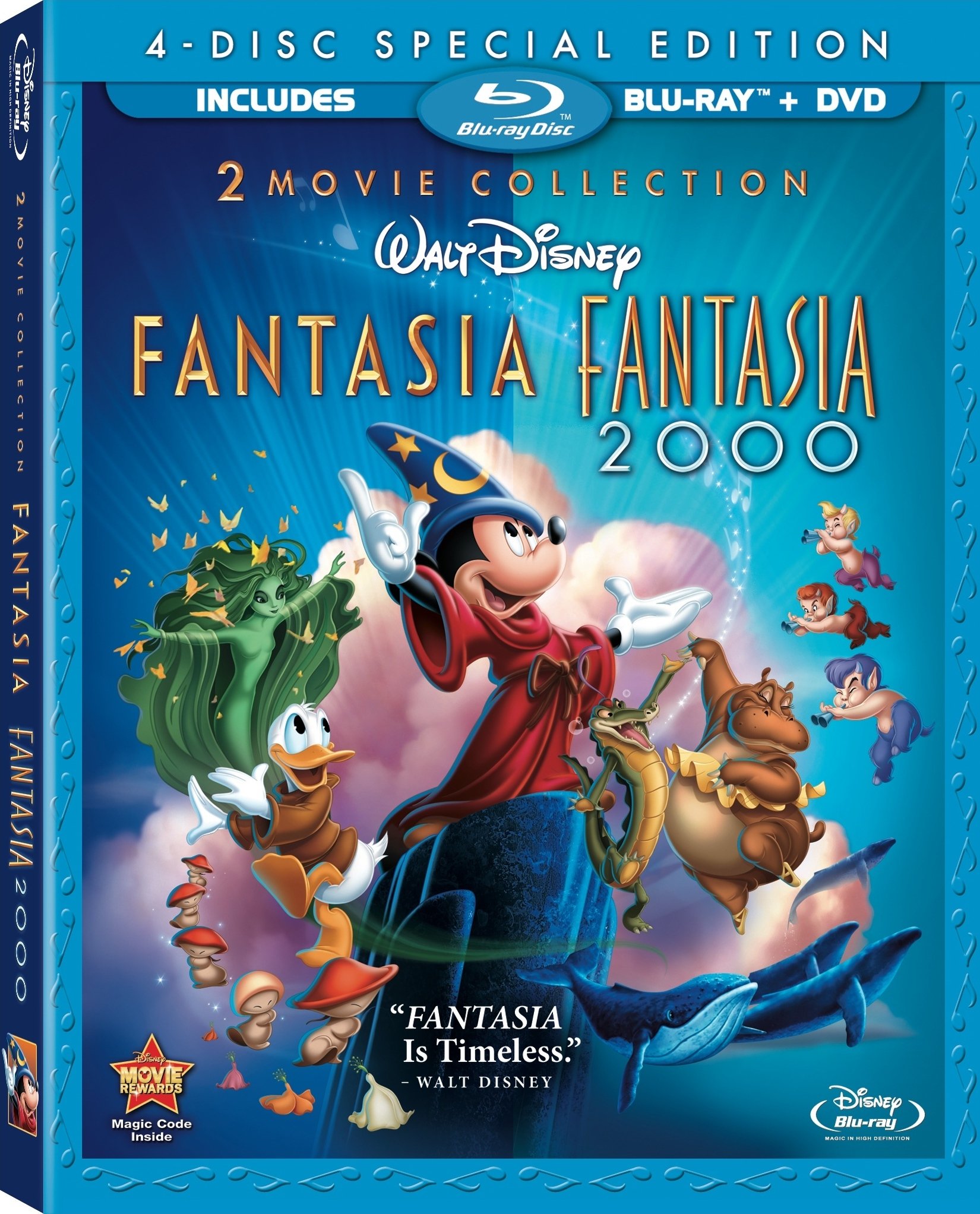 Walt Disney let success go to his head. And as a result, success temporarily eluded him. Snow White and the Seven Dwarfs was an unprecedented hit, ushering in the concept of feature-length animation as a roadshow powerhouse, an unstoppable moneymaker. Disney undoubtedly had to be feeling a touch Mabusean over his movie’s ability to simultaneously charm and edify the unwashed masses and urban elite alike. And so it was that he took “The Sorcerer’s Apprentice,” the all-chips-in Not-So-Silly Symphony he was developing to restore a waning Mickey Mouse to his former glory, and re-envisioned it as but one segment in an entire portmanteau of animated whimsy set to easily recognizable classical music. In other words, Disney wanted to bring Mickey Mousing into the realm of high culture.

He enlisted the assistance of conductor Leopold Stokowski to help select pieces of music, rounded up his entire stable of animators and directors (including Ben Sharpsteen, Hamilton Luske, and Wilfred Jackson), and ran up production costs that exceeded Snow White and the Seven Dwarfs’s then sizable $1.4 million by nearly another million bucks. With only one or two exceptions, Disney’s production team turned in extraordinarily solemn-minded, special effects-heavy segments that pushed Disney’s art to places it had never been to before. The entire movie feels paradoxically caught between the spirit of invention and the buttoned-down terror of giving a recital. Far more than the pithy fairy tale that was Snow White and the Seven Dwarfs, Fantasia felt like it intended to deliver an event. But in trying to affix onto his production a big fancy cummerbund, Disney nearly lost his shirt.

In other words, Fantasia is the closest Disney ever got to producing his own grand folly, in the Intolerance/Fitzcarraldo/Playtime sense covered by Stuart Klawans in his book subtitled The Cinema Out of Order, though obviously Disney’s production operated on a much more controlled scale than his hubris. But that’s the main reason it endures. The entire history of Disney’s animated features is littered with evidence of the Mouse House imposing itself upon the American canon, and in a sense, Fantasia may just be the studio’s least self-inflated ‘toon this side of The Emperor’s New Groove.

Okay, yes, the notion that Beethoven, Bach, or Stravinsky could ever be “improved upon” by serving as background music to paradiddling nymphs, pastel ice cream cumulonimbi, and a time-lapse depiction of the Earth’s creation may seem just a touch megalomaniacal. One naturally reasons that it’s one thing to turn stories intended for children into movies primarily aimed at, well, children (and maybe more than just a few regressive adults); it’s something else to infantilize the complexities of sophisticated symphonic music. But I would call that characterization of Fantasia unfair. Disney pretty clearly stepped outside of his comfort zone at this early point in his career, and if the film’s rewards are uneven compared to the mastery of the form represented in his concurrent production Pinocchio, his ambition can not, in this case, be faulted. (Talk about ambition. Disney’s original intention was to revise Fantasia on a semi-annual basis, to develop dozens of other segments and send the pieces out in reconfigured form, until poor box office returns scuttled those plans. It could’ve been the only Disney film with a repertoire.)

There’s little indication that Disney wanted to absorb the pieces he chose, especially given that in nearly every case where the selection came equipped with its own narrative setting (i.e. Tchaikovsky’s “Nutcracker Suite,” Stravinsky’s “Rite of Spring”), Disney’s visual accompaniment is pointedly not congruous, which ultimately suggests deference to the composers’ intentions by positioning the Disney versions as mere alternates. His “Nutcracker” ballet doesn’t even include the titular yuletide figure, instead choosing to showcase the changing of seasons through falling leaves and dancing snowflakes.

Which isn’t to say that every composer accepted the film as a compliment. Stravinsky in particular was mortified by what had been done to his “Rite of Spring.” But most of his ire was aimed at the fact that his composition had been truncated, reorganized and performed under Stokowski with apparently little regard for the piece’s dark majesty. In that sense, Fantasia is guilty on all counts. I can think of no other musical performance of “The Rite of Spring” I am less impressed with than the one featured here; it always seems to be deliberately retreating from the work’s jagged tonality and percussive cruelty. But it’s sort of amazing, in retrospect, that a piece that had been a succès de scandale a mere quarter-century prior could be used in mass entertainment to (arguably) depict the scientific foundation of evolutionary theory only 15 years after the Scopes monkey trial.

Fantasia admittedly only seems about as great as the particular segment you happen to be watching in the moment, which in the case of the tedious opener “Toccata and Fugue in D Minor” or the outright embarrassing and seemingly endless Art Deco-tinged Greek mythology of Beethoven’s “Pastoral” (tacky enough even without the presence of the racist, half-donkey Topsy-centaur character Sunflower, which has been censored even as the slant-eyed mushrooms from “Nutcracker” are allowed to continue bowing away) are more likely to inspire reactions like this. (On the flip, I bet Warner Bros. must’ve been jealous of the anarchic hippo-and-ostrich ballet pirouettes in the riotous “Dance of the Hours” sequence.) But Fantasia is also one of the few Disney movies whose outsized aims marinate tastefully in memory instead of festering, and if it continues to introduce children to Stravinsky’s 3/16 by 5/16 time signatures, the original music Allan Sherman sang along to in “Hello Muddah, Hello Faddah,” and the glory of split-second tit shots from Bald Mountain’s hellish spectral banshees in flight, then it’s unquestionably among Disney’s masterpieces.

It’s either ironic or totally appropriate that the one segment that emerged with a life of its own outside of Fantasia was the one that inspired it in the first place. Of all the film’s segments, “The Sorcerer’s Apprentice” tells the most traditional story via the least experimental animation accompanied by the least-previously famous piece of music in the entire lot. But it starred Mickey Mouse. Consequently, it became the touchstone episode, the only one chosen to tag along when Roy Disney developed Fantasia 2000, which attempted to make good on brother Walt’s stipulated plans to keep revising Fantasia indefinitely. (Plans that might have been a little truer to Walt’s intentions had “The Nutcracker Suite” and “Dance of the Hours” also been included as originally intended, until other new segments took their place, presumably to keep the IMAX-destined movie a reasonable length.)

Fantasia 2000 was pieced together throughout the 1990s, at a much slower pace than the original. The animators worked on it almost a la carte. But what should’ve felt like one big asterisk on the screen (a splashy bonus feature released just as the DVD format was reaching the point of critical mass) is actually a worthy successor. What it lacks in the original’s heft and gravitas it makes up for in wit, polish, and, most importantly, variety. One suspects one of the main reasons more of Fantasia didn’t make it into Fantasia 2000 is because to have done so would’ve reintroduced the original’s uniform quality. Instead, Fantasia 2000 incorporates a wider range of orchestral styles, matched up with much looser and freer animated modes. Appropriately, some of the musical choices in the sequel are safer (none more cringingly so than Edward Elgar’s “Pomp and Circumstance,” which is used to allow Donald Duck’s biblical Noah to graduate his paired animals from out of the arc that rescued them from the worldwide flood), and some more obviously iconic (George Gershwin’s “Rhapsody in Blue,” turned unadventurously but pleasingly into an azul-hued day in the life of Al Hirschfeld-inspired Manhattanites).

But there are also a few more surprising than anything the first film selected, most notably the virtuosity of Dimitri Shostakovich’s second piano concerto and the rolling dignity of Ottorino Respighi’s “Pines of Rome,” whose flying whales match the original’s “Pastoral” in kitschiness but manage to transcend the concept thanks to the fierce commitment of director Hendel Butoy and his unerring knack for matching the soaring action to the finale’s crescendos. Fantasia 2000’s program just seems a much better fit for the format than did the original’s, right down to the replacement of Stravinsky’s “Rite of Spring” with his more overtly crowd-pleasing “Firebird Suite,” which here becomes a sparkling, turbo-charged recreation of Mount St. Helens’s eruption and the cycle of life (represented here by an amorphous, minxy wood sprite) that brought the mountain’s surrounding valley back to verdant life. If Fantasia’s collar was a little too starched, Fantasia 2000 is like an orchestra packing the house with its annual pops concert.

Don’t get me wrong. Fantasia on Blu-ray looks better than seven sharps in a key signature. But it shares billing with the newer and more overtly spangled Fantasia 2000, which looks like it’s 12-tone in comparison. Either way, the video transfers are colorful and attractive. The interstitial live-action segments in the 1940 film look as though they could’ve been shot yesterday. The animated sequences are not overly grainy, but still retain a strong filmic representation. The colors have not faded with time, and some of the effects in the “Night on Bald Mountain” sequence look startlingly fresh. Unfortunately, the directional surround mix still strikes me as maladroit and half-assed, just as it sounded on the DVD release in the early aughts. They really ought to have just stuck with the mono mix. Meanwhile, Fantasia 2000 is a chromatic workout, with a rich, robust orchestral sound to match the flawless visuals. Turn it up and let your audiophile snob flag fly.

For whatever reason, Fantasia is not being released on Blu-ray under Disney’s “Diamond” banner. An outrage if you ask me, but then again, I guess it’s probably too much to ask one of the Disney Channel chanteuses to wrap their prepubescent vocals around one of the “songs” in either of these films. (I’d love to hear Joe Jonas hit the high note from the end of “Pomp and Circumstance.”) I’d be cool with them releasing the Blu-ray set without the prestige name if they hadn’t also made the decision to chop out much of the bonus features that accompanied the previous “Fantasia Anthology” DVD edition, making them only available through the “Virtual Vault” feature, which requires an Internet connection to load cumbersome and low-quality video files of what was previously housed on a standalone DVD. Hey Disney, if Blu-ray is the future and DVD’s days are numbered, how about you save us the trouble of throwing away the two DVDs of the feature presentations and just include the old DVD of bonus features? Okay, some of those features end up included on the two Blu-ray discs, which themselves also include new items such as the Salvador Dalí-inspired short feature Destino, which was previously included in the theatrical run of The Triplets of Bellville but is now restored to its proper context as part of the Fantasia fold. (The short is seven minutes, but if you want more, there’s also an 80-minute behind-the-scenes documentary.) The features also retain their audio commentary tracks (three on the 1940 film, two on the sequel), interactive galleries, and artwork. But we’re talking about hours and hours of content that was just waiting to get recycled that, for whatever reason, is effectively missing for anyone who doesn’t have their Blu-ray player hooked up to the web.

The bonus features, or lack thereof, are a bummer, but Fantasia and especially its eager-to-please stepchild Fantasia 2000 have never looked better.