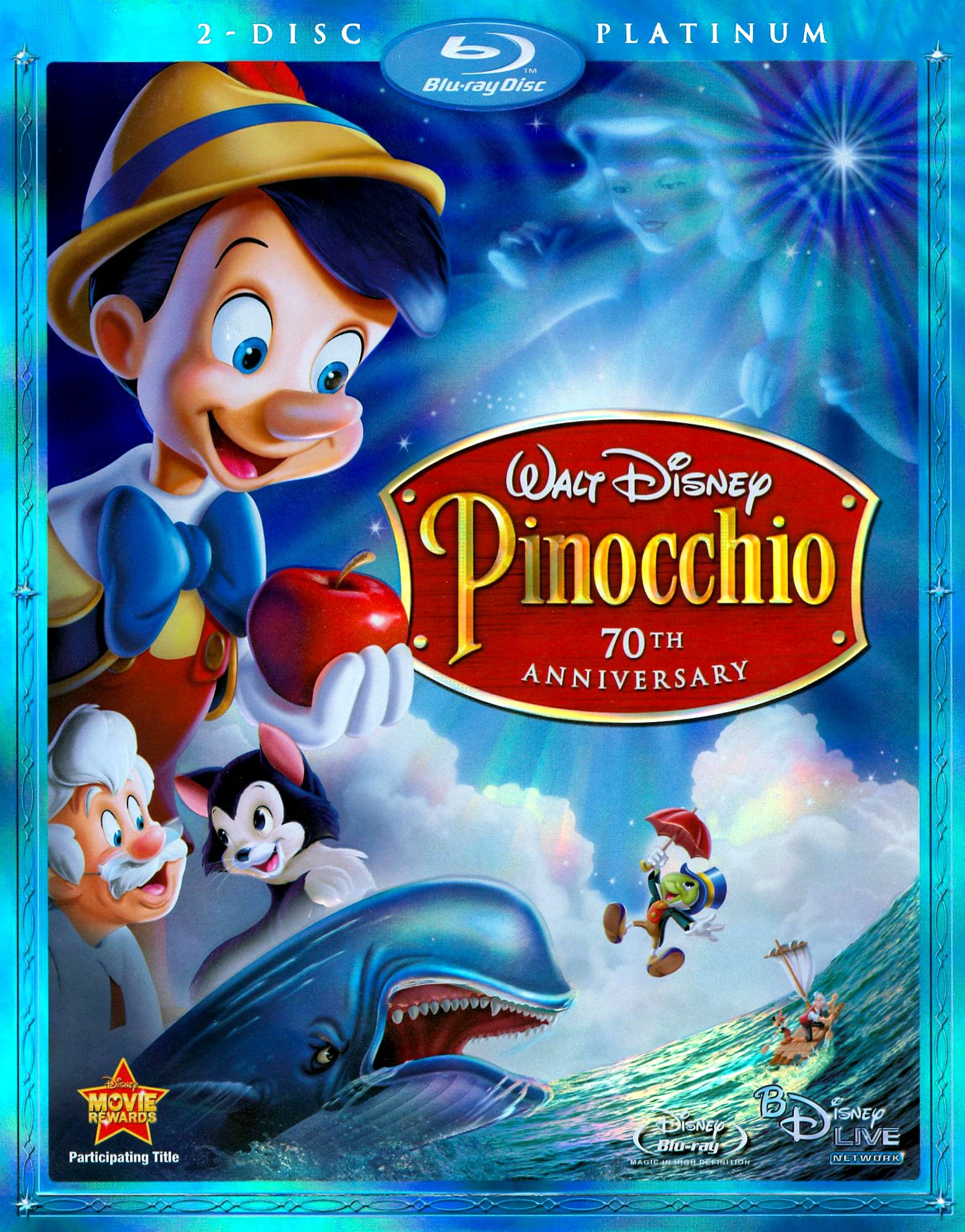 A lonely old man who owns a toyshop and dresses in stockings. His pint-sized marionette that he fervently wishes could be a real live boy toy. A belief in the transformative power of fairies. A proboscis that sprouts wood at the most inopportune times during a young boy’s formative years. A wolf-whistling cricket conscience. Snappy-dressing predators looking for a fast buck at the expense of talented stage brats. A corpulent businessman whose trade is the supple resilience of ill-mannered young boys, who he lures into cages by offering them cigars and Jesus Juice (er, beer) at a raucous amusement park made specifically to be vandalized while its visitors are scandalized. Nope, no perverted subtext here.

Pinocchio, Disney’s long-awaited follow-up to the studio’s runaway hit and inaugural kitschterpiece Snow White and the Seven Dwarfs, may be the one Disney feature that most readily invites irreverent textual scrutiny for illicit sentiments. But the fact is that its darker overtures are hardly disguised. Because if the movie’s thesis presents an animated mass of lumber and its quest to become a self-sufficient, physiological being, its antithesis argues there are fates worse than death (or, as the case were, never achieving what we know as life), a nihilistic proposition which directors Ben Sharpsteen and Hamliton Luske—neither of whom were working in any major capacity on Disney’s concurrent “serious” project, Fantasia—are all too willing to present. The resulting synthesis is Disney’s most powerfully dark vision, a movie that, much like its abused cinematic descendent A.I. Artificial Intelligence, is rarely contemplated for its brutal conclusions, and often lambasted for its maudlin overtones.

Pinocchio, the boy carved by lonely old Geppetto, is born into a corrupted arcadia. From the moment he sticks his kindling finger into the transfixing flicker of a candle, we realize we’re dealing with the spectacle of danger without mortality, consciousness without morality. Pinocchio is presented as so relentlessly trusting and optimistic that the audience isn’t offered any alternative but to empathize with something that is not officially alive. For God’s sake, the Blue Fairy that grants him free will and self-sufficient motor skills (of a sort) has to assign a singing cricket the burden of being Pinocchio’s conscience. There is, for all but a few minutes of the movie’s surprisingly languorous-feeling 88-minute running time, no internal logic within the movie’s protagonist, only external forces. That’s not exactly to say that Disney’s Pinocchio is sui generis exactly. After all, Snow White had neither a stray cynical thought nor the brain capacity to think it. But she was in every sense a cartoon, while this sprightly Oberammergau boy is like a singing, dancing Nietzschean aphorism. (Okay, not quite. Pinocchio is Italian, not German. But close enough.)

Adapted from a serially-published set of vignettes, Disney’s Pinocchio could’ve easily been produced as a linear set of blackout sketches, a heroic epic on strings cataloguing the perils and pitfalls Pinocchio overcomes in order to prove his worth as a sentient being. Indeed, that’s pretty much what the screenwriters ordered, but Sharpsteen and Luske never let any individual chapter in Pinocchio’s fairy-tale bildungsroman stand alone. No lesson is ever learned, no emotion is ever tagged without leaving behind the scars of discovery—which accounts for the movie’s steadily compounding sense of dread. For instance, it may surprise people coming back and viewing the film years since their last screening to learn that Pinocchio’s nose only actually grows in one single scene and is quickly restored by the Blue Fairy as a one-time-only favor. But so traumatizing and psychosexually suggestive is the event that it hangs over the rest of the film, and continued to resonate within audiences long after they’d passed the point of adolescence.

Yes, the sagging weight of knowledge, experience, and conscience are ultimately rewarded with a syrupy fulfillment of the Blue Fairy’s promise to turn Pinocchio into a real boy, but as with A.I., the fairy-tale ending is tinged with the sinister. Pinocchio’s biological redemption doesn’t change the fact that he still lives in a world that turns little boys into jackasses and then sends them to work in the salt mines. If anything, Sharpsteen and Luske’s luxuriant excursion into increasingly dark settings—from the oil lamps of Stromboli’s puppet stage to the pin-lit grime of Pleasure Island, and concluding within the cavernous ripples of Monstro the whale’s abdomen—override Jiminy Cricket’s goody-two-shoes ethos. And just as the Blue Fairy grants Pinocchio’s wish to shed the splinters and accept the opportunity to bleed real-boy blood, Pinocchio redeemed Disney from the parlor trickery of Snow White and suggested animated features could indeed dance without strings.

One of the first Disney movies to be released on DVD back in the late 1990s, Pinocchio is now one of the first early Disney movies to get the lush Blu-ray treatment (only Sleeping Beauty beat it to the punch). The difference between every video version I’ve seen so far (from VHS to DVD) and this Blu-ray transfer is as ample as the difference between a marionette and a real boy. To call it a jaw-dropping tour de force would be an understatement. And I invoke paroxysm not because of the presence of the sort of bold, saturated, flawless colors that have marked some of their more recent DVD remasters, but instead because whoever was put in charge of mastering the print this time around eschewed digital gaud and instead favored naturalistic tones and, occasionally, grit and grain. When viewed in 1080p on even a middle-end HDTV set, it’s sensually filmic in presentation. The charcoal textures of Monstro’s flesh and the insanely detailed physics of a whale sneeze (water recoil, seagulls fighting turbulence, smoke pluming) are particularly stunning. Dare I say Pinocchio looks like a real boy? The 7.1 sound mix truly shines during the movie’s (relatively few) songs, mostly because they’re the only element that maintains a realistic EQ balance, while almost everything else skews toward the treble side of the scale. “When You Wish Upon a Star” aches from each speaker. If I prefer the mono mix, it’s only because I still opt for the original soundtrack whenever applicable.

Pleasure Island was in the original stories called Booby Island. That’s the most salient point I took from the feature-length commentary track with Leonard Maltin, Eric Goldberg, and J.B. Kaufman. It’s an authoritative track, with seemingly no director, animator, musician, voiceover artist, or studio executive unnamed and unpraised. Their collective enthusiasm-forgivable for being, in the case of Pinocchio, totally justifiable-is only matched by their obvious expertise in all matters Disney. The commentary track and a comprehensive, hour-long making-of documentary spearhead a typically generous set of extra features. This being a Blu-ray, though, some of the features are presented in high-definition, and the standard chintzy interactive games at least now offer the option of recording your high score with your initials, a la Atari. There are also live interactives you can access through what’s called the “BDisney-Live Network,” such as movie chat, movie mall, movie challenge, and movie rewards. None of these will make you forget there is a movie buried somewhere within this set. Pop-up factoids, deleted sequences, isolated song cues, a featurette on the art of woodcutters, and a totally superfluous “Disney View” function that fills those black bars on the right and left sides of 16:9 televisions with Golden Coach-style art borders all help round out the set, which wouldn’t be complete without some jailbait contract player moaning via Auto-Tune through a signature Disney song. This time, Camp Rock’s Meaghan Jette Martin wishes upon a star, and somewhere behind multiple layers of protection, Walt Disney’s cryogenically-frozen nose no doubt stirs.

One of the only Disney animated features with real gravitas, Pinocchio’s reputation grows longer with each passing generation.