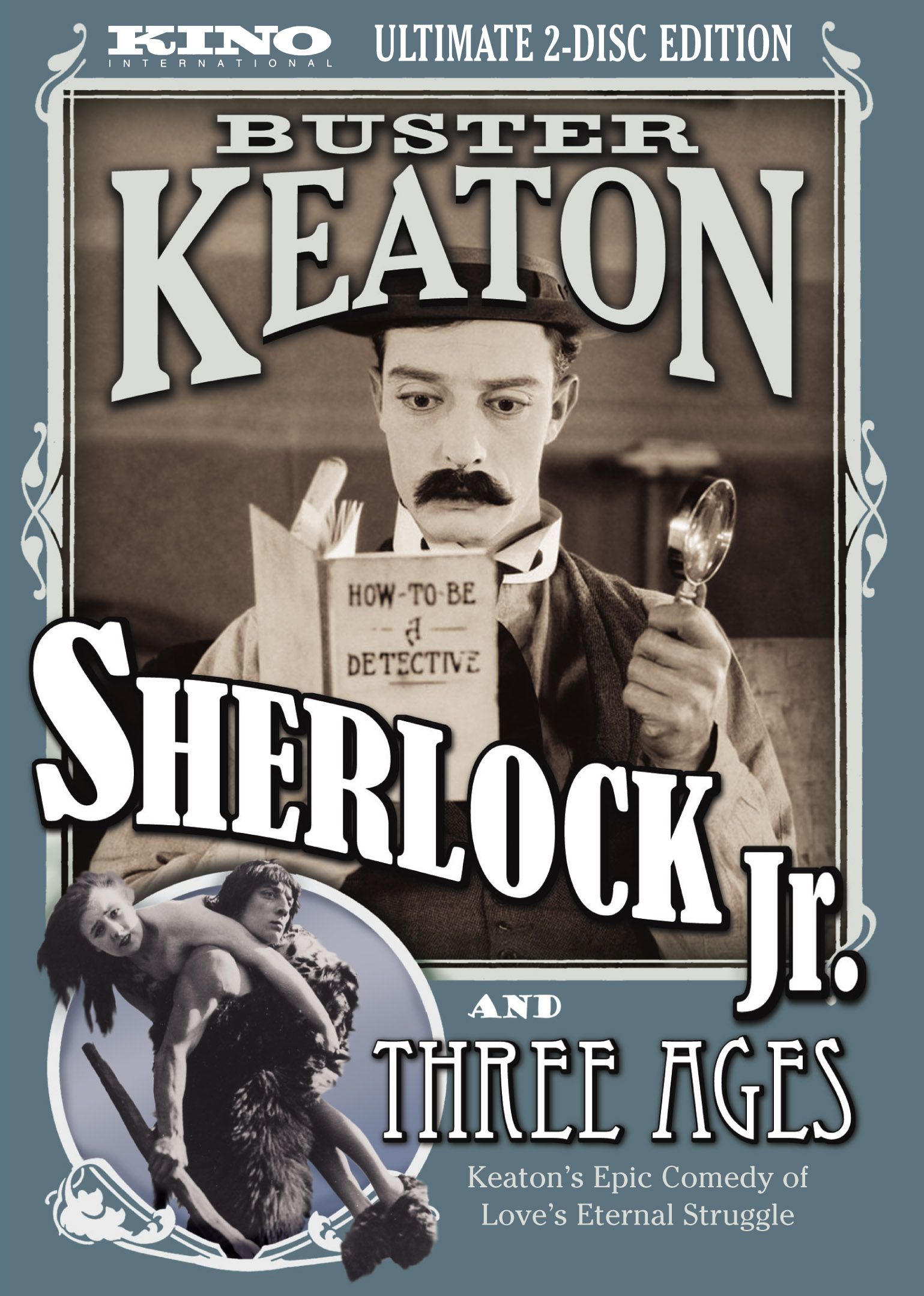 In their ongoing repackaging of the silent films of Buster Keaton, Kino International offers a two-fer of the first and third features made by the star’s production company as he branched out from the comedy shorts that made his reputation. Three Ages is an epoch-hopping parody of D.W. Griffith’s Intolerance, with Keaton as a suitor pursuing his dream girl (Margaret Leahy) with competition from a burly rival (Wallace Beery) in three different settings: the Stone Age, ancient Rome, and ‘20s Los Angeles (“The Present Age of Speed, Need, and Greed”). The prehistoric plotline is the silliest and most antic, with Keaton clad in animal skins and a moplike wig, surveying the landscape from the back of a clay-animated dinosaur, using his club to play antediluvian golf and baseball, and presenting his “card” (a flat rock featuring a caricature of his deadpan) to a medium who forecasts his love life by pushing a snapping turtle across a Ouija board. (Leading lady Leahy, who frustrated Buster with her limited range, gets dragged off by the hair when he wins her.) In the Roman strand, Keaton shows up for a Ben-Hur-like chariot race with sled runners and a dog team; imprisoned in a pit with a lion, he gives the beast a manicure. The contemporary story, with Keaton in his trademark porkpie as he gets plastered at a speakeasy and dashes to prevent a wedding in the typical chase finale, is an amusing exercise of his familiar romantic-slapstick template, but was surpassed by him both earlier and subsequently (the football comedy here can’t touch College). Three Ages doesn’t have the ambition for an intercutting climax a la Intolerance, but settles for being a cute, funny warm-up for grander comic achievements.

Sherlock Jr. is just such a clockwork tour de force; running about 45 minutes with no fat, it stands as perhaps its maker’s most delightful creation. Keaton is a movie projectionist in the local theater, obsessed with a dime-store How to Be a Detective book, mustache disguise glued to his face, and engaged in the pursuit of a Mary Pickfordesque cutie (Kathryn McGuire) until he’s framed as a thief by his slick rival. The opening scenes are full of expertly executed bits (Buster reluctantly handing over lost dollar bills to theater patrons as he sweeps up, shadowing the villain in imitative lockstep from three feet behind), but the film takes off when the projectionist dozes in his booth and dreamily enters the potboiler being shown, now populated with the figures of his waking life. (The montage where Keaton first walks into the screen puts him into a new world with each cut, jumping off a seaside rock and landing in a snowbank; it’s an exhilarating set piece that further endeared him to Surrealists.) Reborn as master sleuth Sherlock Jr. in top hat and silk scarf, the projectionist sets about foiling a ring of thieves to offset the humiliation of his real-life failures.

Still immensely satisfying for both its playful structure and eye-popping gags, as when Keaton appears to leap through the torso of an associate to elude baddies in an alleyway, Sherlock Jr. confirmed the maturity and new level of craft evident in Buster’s preceding hillbilly-feud comedy Our Hospitality, and anticipated his steady run of top-flight work in the waning silent years. Roused from his Sherlock fantasy, the projectionist reconciles with his sweetheart by aping the society swells on the theater screen, setting up a final joke about his sexual innocence that echoes the closing sequence of Three Ages. If Keaton’s iconic, solemn young man is hard to envision as a father, it’s because this masterpiece offers him up as a purposeful yet accidental hero, propelled through a hair-raising back-road adventure on the handlebars of a motorbike, unaware that no one’s driving.

The Buster Keaton estate’s archival 35mm elements for Three Ages were clearly in dodgy shape, because in spite of HD remastering, there are scenes with noticeable print damage, from scratches to momentary whiteouts. By no means ruinous, the flaws don’t obstruct an appreciation for the Keaton team’s visual panache, particularly the clever optical and production design of the Roman segments. Sherlock Jr. dazzles in comparison, with milder blemishes throughout, save for a couple restored shots incorporated from fuzzier prints. Of the six total scores for the two films, the new stereo tracks by Robert Israel and the Mont Alto Orchestra are lively and well-recorded, and a synchronized selection of ‘20s jazz records has a transporting charm.

A plethora of goodies for Keaton fans who haven’t snapped up every book on the man’s work, led by an audio commentary for Sherlock Jr. by David Kalat, who evaluates evidence on how much of the film was directed by Buster’s scandal-plagued mentor, Roscoe “Fatty” Arbuckle; interprets it as a sort of four-reel magic act, owing much to the legacies of both Harry Houdini (a Keaton family friend in their vaudeville days) and early cinema’s Méliès brothers; and lauds it as the alchemic product of Keaton’s team of writers, gagmen, and technicians. The film’s making, with particular emphasis on the precise mechanics of the step-into-the-screen sequence, is the subject of a 20-minute documentary, and John Bengtson, author of a book on sites used in Keaton silents, provides a tour of Sherlock Jr.’s L.A.-area locations.

Though inarguably the lesser work, Three Ages gets a more fruitful Bengtson visual essay, revealing that arches of the spanking-new Los Angeles Coliseum were used for Buster’s Rome, and that the rocky Garden of the Gods hills northwest of Hollywood made for scenic caveman turf. The movie’s trio of interweaving plots can also be viewed as standalone, recut shorts (as, it has been apocryphally stated, they might’ve been if the feature had flopped). Most offbeat is nine minutes of a 1912 Stone Age love triangle by D.W. Griffith, Man’s Genesis, presumably fodder for Keaton along with Intolerance; populated by burlap- and grass-clad folks named Bruteforce and Lilywhite, it clarifies that lust for a woman inspired the invention of the first deadly weapon (no Kubrickian monolith in sight).

A minor work and a masterpiece from the silents’ most kinetic clown, with peeks at the magician’s methods.