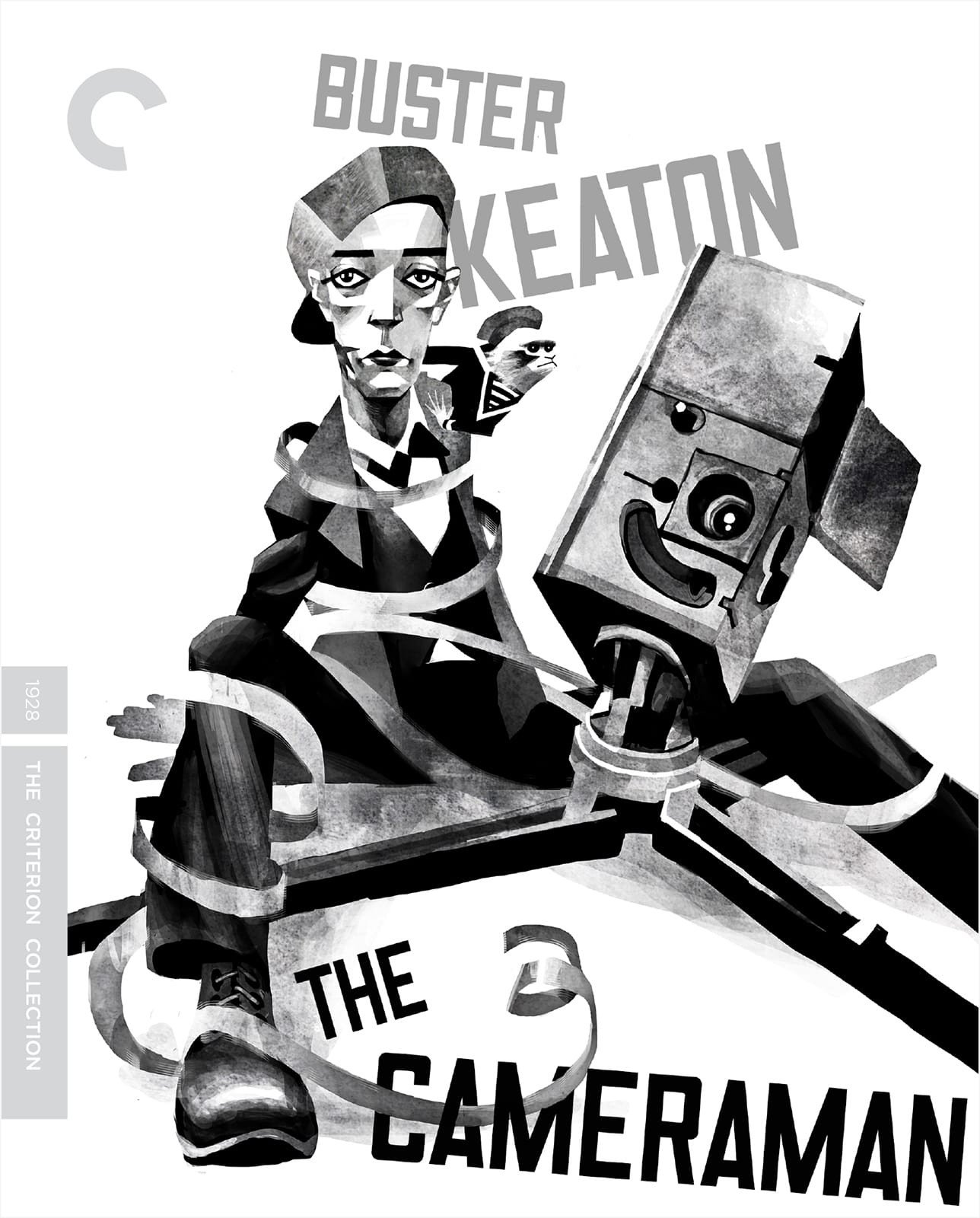 Despite the fact that he broke his neck while filming a stunt for Sherlock, Jr., Buster Keaton was always one of the most schematic and precise artists of cinema’s early years. His control was physically evident: Witness his confidence—or, perhaps, his insanity—during the hurricane sequence that closes Steamboat Bill, Jr., most notably the bit where the side of a house literally comes down around him. But it was also emotionally evident: The nickname “the great stone face” has less to do with his alleged facial inexpressiveness and more with his naturalistically muted response to exaggerated situations.

When Keaton sacrificed that independence and control by signing a contract with MGM, where production schedules were tighter and less open to the sort of gag-improvisations that he was used to indulging, many observed it as the beginning of his career decline. Which makes it all the more poignant that his first MGM feature, 1928’s The Cameraman, directed by Edward Sedgwick, who up to that point in his career was more or less a director-for-hire, is right up there with Sherlock, Jr. as one of Keaton’s most impressively self-reflective films and an ode to the unexpected and elusive lightning-in-a-bottle nature of filmmaking.

One of the film’s great early gags defines its preoccupation with lack of control. Keaton plays a street-corner tintype photographer who falls in love with the receptionist, Sally (Marceline Day), at a newsreel production office. In a bid for her attention, he applies for a job shooting on-the-spot news with the only camera he can afford: an outmoded, hand-cranked shoebox model. After splurging on shooting “audition” footage, Buster has his reels screened for the office management only to discover that his lack of experience with his ancient equipment has resulted in a mess of poetic double exposures (a battleship appears to lope down a busy Manhattan thoroughfare) and kaleidoscopic, pre-Man with a Movie Camera street bustle.

In its own low-down deportment, The Cameraman is really a raucous, more accessible iteration of Dziga Vertov’s meta-cinematic masterpiece from 1929, at least to the extent that both thrive on postmodern self-referentiality. Throughout Sedgwick’s film, Buster’s camera repeatedly causes chaos, photographically as well as physically, acting as an extended, pseudo-vestigial limb that frequently shatters glass panes as readily as Keaton’s own body works its way into myriad bizarre pratfalls and situations at a local saltwater pool.

Buster appears in front of his own camera twice during the film, once in each half. The first occurrence is during his cinematographic gestalt period, when he consciously places himself in the role of his film’s subject: a one-man baseball team, enacting impossible feats of slugging (an infield run) and defense (a miraculously nonchalant triple play). And the second time occurs when he jumps into the water to save Sally when a romantic rival has left her to drown after a failed daredevil stunt. Redemption has already entered into Buster’s life: When he accidentally knocks down and supposedly kills an organ-grinder’s dancing monkey, he’s pressured to buy the tiny corpse, which seems to come back from the dead in an eerie and hysterical slow-motion shot (the monkey removing his white shroud like a resurrected saint).

It’s that same monkey that’s revealed to be rolling film on Buster’s heroism and, thereby, the artist behind the scenes engineering a comedic resolution. If the film’s first half posits that amateurism is the jumping-off point for accidental expressionism, then its second appears to argue for unregulated primitivism. Specifically, The Cameraman’s most tangible moral is that, if you want to achieve unfussy filmed drama, you’d do best to take your lessons from an organ-grinder’s monkey. As far as I’m concerned, that’s a message for the ages.

Criterion’s transfer was sourced from a new 4K restoration undertaken by the distributor in conjunction with the Cineteca di Bologna and Warner Bros. Two 35mm prints, along with a 16mm print from the Library of Congress, were used for the restoration, and while the latter served as the primary source for the first three reels, only a slight softness to the image and minor signs of damage in the first 10 minutes distinguishes this stretch from the rest of the film. Much of The Cameraman looks dazzling here, with as consistently sharp, clean, and richly detailed an image as we’ve seen from a home-video release of a silent film to date. The contrast is also impressive, with inky blacks and a remarkable range of grays, and one need only glimpse the extended scene of Buster in the rain for proof of just how stellar this transfer is, with a breadth of visible information that’s free of any of the typical flaws of home-video releases of films of this era, such as a flickering or jittering of the image. The uncompressed audio is also flawless in its presentation of a new score by composer Timothy Brock.

Given the current status of the rights to Buster Keaton’s features, this release is likely Criterion’s only shot at the silent master’s oeuvre for the foreseeable future, and they have truly pulled out all the stops. Each of the extra features included here is both substantial and unique in its approach to Keaton’s art and career. First and foremost among these is a 2004 audio commentary with Glenn Mitchell, author of A–Z of Silent Film Comedy: An Illustrated Companion, who nicely balances discussion of The Cameraman’s self-reflexive elements, Keaton’s struggles during his time at MGM, and how the film quickly became the template for many of the studio’s future comedies. Perhaps most intriguing is Mitchell’s persistent pushing back against the impression that Keaton’s performances were devoid of emotion, urging viewers to pay particular attention to the actor’s eyes during key moments in the film.

This release also comes with Edward Sedgwick and Keaton’s Spite Marriage from 1929 and an accompanying commentary track, in which historians John Bengtson and Jeffrey Vance discuss Keaton’s follow up to The Cameraman. The duo expand on Keaton’s difficulties adjusting to MGM’s more rigid and streamlined production methods, such as working with a lower budget and more tightly scripted scenario than he did on The Cameraman, and touch on the many blink-and-you’ll-miss-them visual gags that Keaton works in throughout the film.

Of the four non-commentary features, the new short documentary Time Travellers is the most singular and invaluable. Here, film historians Marc Wanamaker and John Bengston tour Los Angeles to visit numerous locations where The Cameraman was shot, but more interestingly delve into the various investigative tactics that were used to track down these somewhat obscure locations, including old photographs and maps and details in films as minute as reflections in windows and mirrors. The disc also comes with two other informative short docs: So Funny It Hurt: Buster Keaton & MGM, which shifts focus to Keaton’s years at MGM, and The Motion Picture Camera, which tracks the development of movie cameras in the silent era, from the early Pathé and Lumière cameras to the industry-standard Bellenhouse model.

The extras are rounded out with an interview with author James L. Neibaur, who discusses the later period of Keaton’s career, particularly his multiple films with comedian Jimmy Durante that often saw Buster out of his element and playing second fiddle. Criterion’s all-around remarkable package also comes with a beautiful 38-page booklet—a rarity for one of their recent non-box set releases—with a fantastic essay by Imogen Sara Smith and a chapter from Keaton’s autobiography detailing time at MGM, titled “The Worst Mistake of My Life.”

Criterion’s disc of The Cameraman offers an embarrassment of riches, from the stellar new 4K transfer to a multitude of diverse and fascinating extras.