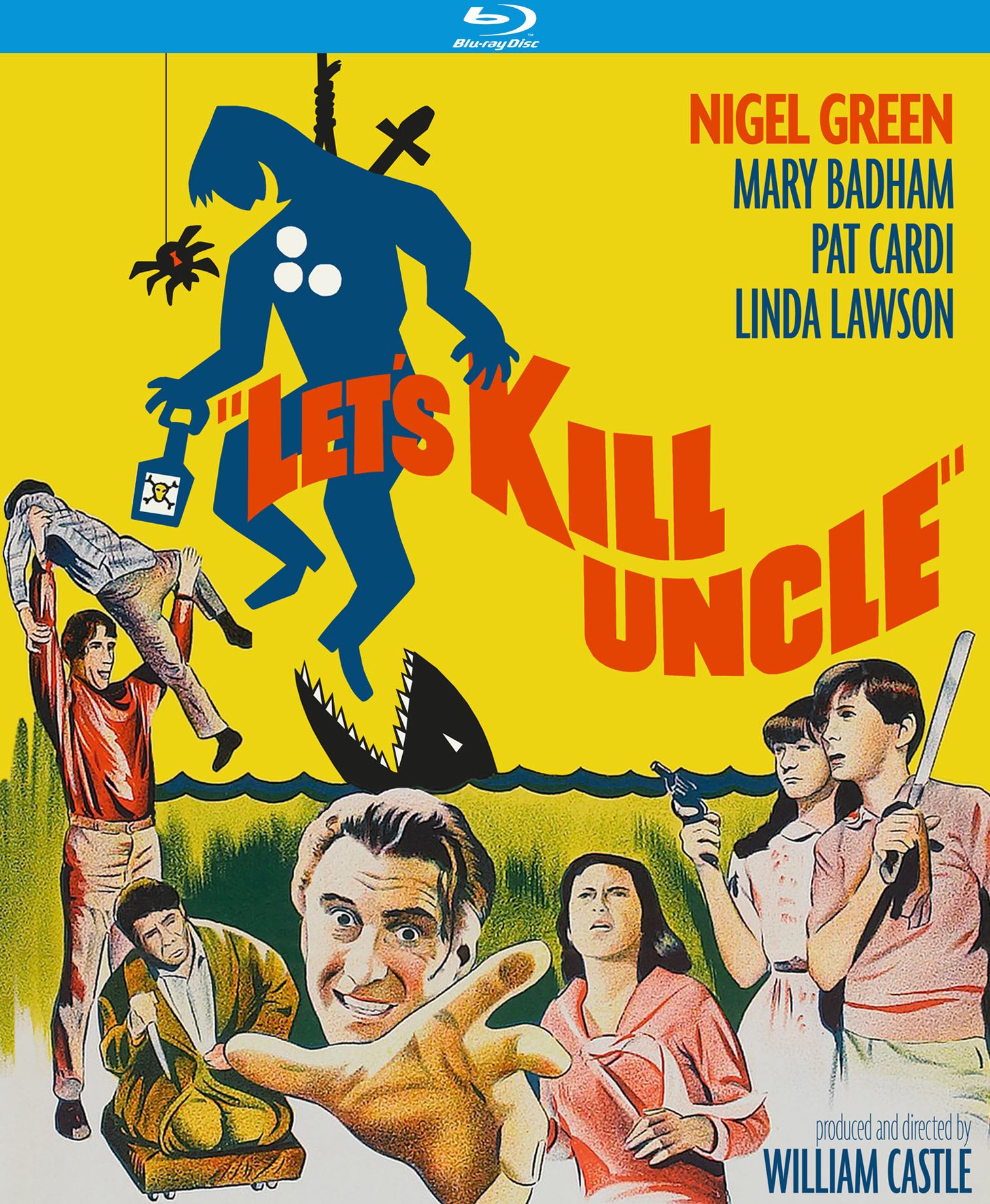 William Castle’s Let’s Kill Uncle marked something of a new approach for the cult producer-director, whose previous films had relied heavily on carnivalesque gimmicks and old-fashioned ballyhoo, often delivered on screen by the man himself. Instead, here we have a colorful—in more senses than one—adventure yarn for young adults. Squint and you could almost mistake it for a Disney movie. But make no mistake, roiling under the seemingly innocuous surface are currents of perversity and pitch-black comedy.

Let’s Kill Uncle opens with a bang: a bloody automotive smashup whose primary casualty, Russell Harrison, is played by Castle in one of his customary Hitchcockian cameo appearances. The sudden death of the multi-millionaire not only leaves his 15-year-old son, Barnaby (Pat Cardi), as the only heir, but results in him being whisked off on a tramp steamer to sardonically misnamed Serenity Island, where he will reside with his Uncle Kevin (Nigel Green), a career solider and author of the bestselling tome Killing the Enemy.

Castle takes his time setting all this up. We’re introduced to Barnaby on board the ship, where he and tomboy Chrissie (Mary Badham) squabble and get into mischief. Right off the bat, it’s clear that we aren’t in the land of Disney. These aren’t your average adorable moppets. Occasionally annoying and, in Barnaby’s case, downright high-handed, they’re nevertheless well-rounded characters, equally capable of unabashed bursts of bravery, and so far closer in temperament to actual young adults than, say, a tennis-shoe-wearing computer.

The island itself is every adventurous child’s dream come true, complete with beetling cliffs, incongruously tropical flora and fauna, a graveyard in a clearing, and, best of all, an eerie, supposedly haunted hotel. This allows Castle to indulge in some wonderfully atmospheric Gothic hijinks, as Barnaby and Chrissie explore its cobweb- and shadow-strewn environs. In a perfectly surreal non-sequitur, they discover a stagnant swimming pool on the grounds that’s somehow infested with sharks. The juxtaposition between stock footage of sharks circling and the sight of a patently plastic fin cutting through the mossy water is priceless.

Throughout Let’s Kill Uncle, Barnaby evinces an outsized fascination with death and killing. He’s an avid reader of his uncle’s book, relishing in particular one exploit involving an SS officer and a razor-wire garrote. He’s also curious about the revolver that belongs to Sergeant Travis (Robert Pickering), the cop assigned to accompany him to the island. These preoccupations are at once entirely believable for a boy Barnaby’s age but also set the stage for the blackly comic contest between uncle and nephew to come.

When Uncle Kevin makes his splashy entrance, his first order of business is to set about trying to kill Barnaby for his inheritance. There’s practically no downtime before the mordant games begin. In one scene, Kevin suavely presides over an intimate dinner party, and in the next he’s all got up in his British military togs, looming menacingly over his sleeping nephew. What he proposes to Barnaby is quite literally a game, with its own peculiar set of rules, his home standing as a neutral “Switzerland” where no attempts on his life will occur.

What follows are an escalating series of attacks and counter-attacks, and spiked with gleeful gallows humor. When Barnaby recruits Chrissie as a collaborator, she instantly agrees, delightedly announcing the film’s titular phrase. Circumstances eventually circle back around to that shark-filled pool for the rather abrupt finale, but give Let’s Kill Uncle points for allowing its young protagonists to solve their own dilemma, without bringing in a deus ex machina that involves the adults. And if, at first blush, it also seems like a disappointingly anodyne happy ending, with Uncle defeated but making his getaway via his private jet, just take a gander at the look on Barnaby’s face. He may have won the battle, but the war seems certain to go on. The game, as Sherlock Holmes would have it, is afoot.

Kino’s new HD transfer admirably renders Harold Lipstein’s Technicolor cinematography. Grain levels are nicely maintained and flesh tones look completely naturalistic, while color saturation is deep and rich, with those jungle greens and the bright primary hues of the costumes and décor popping off the screen. The two-channel Master Audio track is crisp and clean when it comes to dialogue. It also does well by Herman Stein’s lush symphonic score, which includes both some spot-on Bernard Herrmann pastiches and one particular cue involving sharks that unexpectedly anticipates John Williams’s iconic score for Jaws.

Diabolique Magazine editor-in-chief Kat Ellinger and Teen Movie Hell author Mike McPadden deliver an eminently listenable and incisive commentary track. They delve into William Castle’s career and filmography, make an excellent case for his status as an auteur, especially when it comes to the recurring motif of domestic dysfunction, and discuss his handling of Let’s Kill Uncle’s young characters. They also outline the differences between the film and its source material, advocate for works of the dark fairy-tale variety as an antidote to the antiseptic product offered to today’s youth culture, and explore the usefulness of black comedy and gallows humor. The featurette “Mr. Castle and Me” provides an interview with actor Pat Cardin, where he talks about bonding with Castle over magic tricks, developing feelings for Mary Badham, the different proposed endings for the film, and even gives an amusing account about trying to shoot the film while the Universal Studios tour group visited the soundstage.

Making its debut on Blu-ray, William Castle’s film is a genuinely amusing jet-black comedy of (ill) manners disguised as an adventure yarn for young adults.