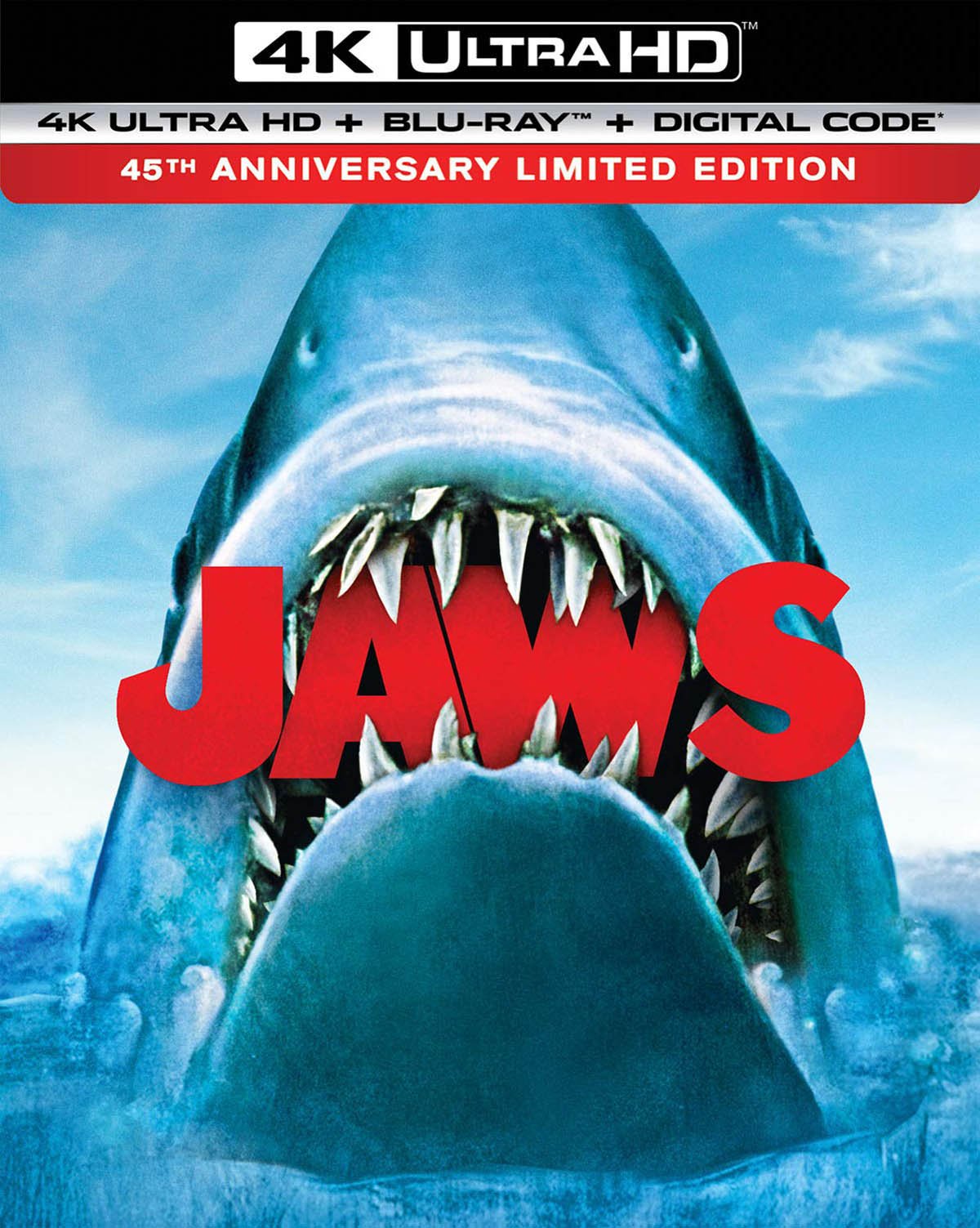 A lively, chaotic swirl of contradictions, prodigious talent, and formal mastery, Jaws is a thriller that played a role in the entire restructuring of Hollywood’s methods of selling its films to the public. It was the sure-to-be calamity that became one of the most beloved and quoted films of all time—a certain generation’s Citizen Kane that gave rise to a legendary, controversial filmmaker and seemingly turned everyone else into aspiring directors. It also played a role in the rise of an obsession with a kind of theme-park movie that gluts global cinemas to this day. That’s a lot of baggage for any film, much less a monster movie with grade-Z roots, to live up or down to.

The surprise is how good it was and still is. The film is a strange mixture of the über-controlled and the wild and wooly. Imagine if portions of Psycho were spliced into one of Hal Ashby’s early films and you’d be closer to the film’s tone than you might think. Jaws is neatly split into two almost entirely different films: The first half is a sophisticated comedy in which violence and despair are allowed to make occasionally discombobulating intrusions, and the second, daringly, is an even more violent parody of the self-flattering macho courtliness that we often find in existential, chest-thrumming stories of all kinds. The Peter Benchley novel that inspired the film played its material dead-straight, and it’s a grim, dull endeavor that got by on the enormous primal appeal of its high concept, but the filmmakers took the basic structure, threw out most of the busy plotting, and created a black parody of greed, studliness, and self-entitlement—in other words, a parody of America.

The director, of course, is Steven Spielberg, and Jaws represented a major turning point in his career, and not just for the obviously lucrative reasons. The film was the capper of a kind of thematic trilogy that introduced Spielberg to the world. First there was Duel, a nihilistic film that follows an innocent man as he’s relentlessly pursued by a seemingly prehistoric tractor trailer. Then, The Sugarland Express, a warmer, even more disturbing action comedy that follows a woman’s desperate efforts to kidnap her own child. And then Jaws, which fuses the sensibilities of the first two to create, whether it’s intentional or not, a disconcerting portrait of America trying to stake its claim in a willful naïveté in the wake of all of the sobering events that define the country in the late 1960s to early 1970s: Watergate, Kent State, Vietnam, etc.

Spielberg would eventually indulge that naïveté without irony (though not nearly as often as he’s accused of), but his first few films are the work of a ferocious, open talent who was pretty much trying anything for effect. The near-miracle of Jaws, which involved the work of quite a few uncredited screenwriters, as well as impromptu story sessions and ad libs, lies in how ultimately of a piece it is. The dissonances—probably born of desperation—feel preordained, and are also the source of the film’s lasting power. Spielberg would grow self-conscious as he became more famous, trying for (and often achieving) mythical, iconic effects, but the young Spielberg was adept at capturing the quotidian that defines the working class. The people in Jaws appear to, which is unusual for contemporary movies, actually work for a living: The offices are worn and shabby, the homes are messy and constantly marked by the demands of raising children, and the adults trade in the sort of world-weary in-jokes that should be familiar to anyone who works a thankless job in an effort to barely pay the bills each year.

For that attention to detail, and for the sly storytelling (all of the film’s major set pieces are foreshadowed in fashions so subtle you’ll miss them the first time), Jaws is the rare monster movie that doesn’t idly mark time as we wait for the next big shock. And the details only amplify those shocks; people tend to forget how ruthless a director Spielberg once was. By 26, he was already an impressive formalist, and he fills his wide shots with details and visual curlicues that maintain a continual apprehension. The film, as Pauline Kael wrote, has tricky editing rhythms that never properly prepare you for the scares. (Though people often misremember the first time we see the shark; it’s not the scene where Brody is shoveling chum, but briefly, and terrifyingly, during the moment before a fisherman loses his leg.)

And, yes, the shark, that unyielding colossus, looks rather fake when we finally get a good look at him, which works entirely in the film’s favor. The shark, effectively built up as an object of myth and obsession for the first half of the film, would be a crushing disappointment if it looked “real,” something most contemporary monster movies, in their reliance on generic CG, seem to sadly fail to comprehend. The shark in Jaws is the shark of our collective worst nightmares, almost otherworldly in its enormity (it sometimes appears to be as big as the truck in Duel) and texture. It’s also a great big phallic joke, the agent of the blowhard Quint’s (Robert Shaw) destruction. The shark can mean anything you want it to mean, or nothing, and that uncertainty epitomizes this movie’s lasting appeal. Jaws is the pop masterpiece as happy accident—a parody of America’s can-do spirit that’s also, by the end, a celebration of it.

Universal has used their 2012 4K restoration as the source for both the new 4K disc and the Blu-ray included in this package. The amount of visible detail in this transfer is quite impressive, particularly in the underwater and nighttime footage. Nearly every frame exhibits a striking clarity, every ripple of water, bead of sweat, and ocean flotsam nearly popping off the screen. The dynamic color balancing also adds to the more naturalistic presentation, evident in everything from the actors’ skin tones to clothes to the ocean itself. On the audio front, the dialogue is clean, the ambient noise of beach-goers and seagulls nicely filling out the background of the mix. As for John Williams’s iconic score, it’s suitably robust, but it never overwhelms the rest of the film’s soundtrack.

The supplemental materials included on this 45th anniversary limited edition release of Jaws are identical to those on Universal’s 2012 Blu-ray. While that’s perhaps disappointing, short of a commentary from Steven Spielberg himself, it’s difficult to imagine any future home-video release of the film topping this slate of extras in terms of scope.

On the feature-length documentary The Shark Is Still Working: The Impact & Legacy of Jaws, made in 2007, various producers and cast and crew members discuss the insanity of shooting the film in the Atlantic Ocean rather than on the Universal lot, and the myriad issues that arose from that decision, including the legendary animatronic shark’s very frequent mishaps. The focus of the doc definitely leans toward fan service rather than anything resembling in-depth analysis, so there’s more than ample lauding of Williams’s score and the massive success of Universal’s marketing tactics. But intriguing little stories, like the one about the genesis of Quint’s USS Indianapolis speech as his reason for hating sharks, offer insight into the ways certain characters were fleshed out in the film with the help of the actors.

Across two hours, The Making of Jaws touches on virtually every aspect of the pre-production, from the adaptation to the casting, and the production itself, including the practical effects team’s contributions, the actors’ on-set improvisations, and the many challenges that the cast and crew faced over the grueling seventh-month shoot. The two-disc set also comes with an eight-minute feature on Universal’s restoration of the film, as well as some rough behind-the-scenes footage, storyboards, production photos, and a handful of deleted scenes and outtakes. The handsome package is rounded out with a 48-page color booklet filled with storyboards, production details, cast and crew bios and assorted promotional materials.

Steven Spielberg’s iconic Jaws returns to home video just shy of its 45th anniversary, this time to take a bite out of the 4K market.