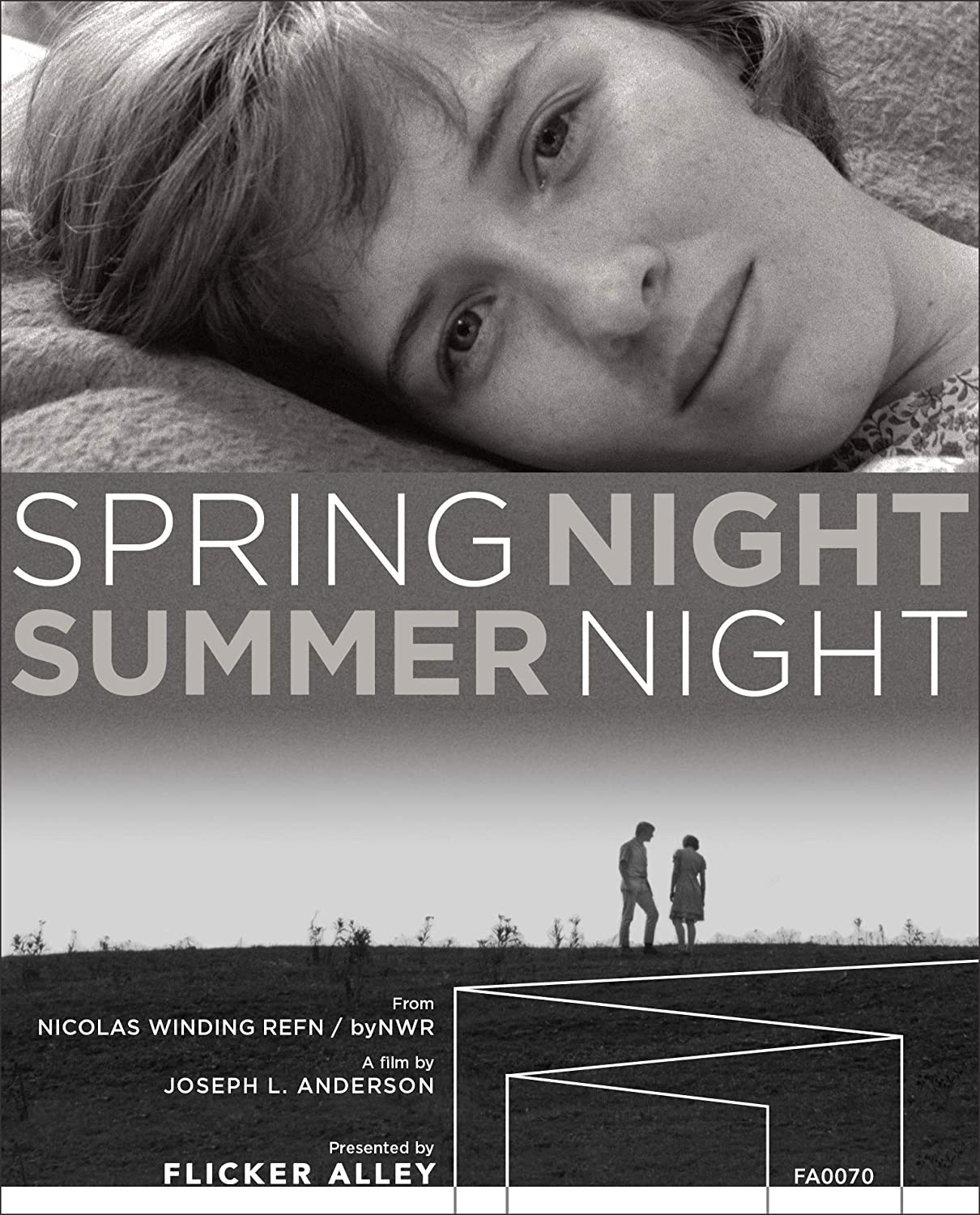 Though saddled with a titillating, easily exoticized elevator pitch—sexually mature siblings in a family of Ohio hillbillies tempt the unspeakable against the backdrop of dying coal country—Joseph L. Anderson’s Spring Night, Summer Night is forged from matters of universal relevance. From its opening scenes, which form a sketch of domestic friction that concludes with a symbol of nature’s upending of familiar order, this neglected jewel of American regional filmmaking is preoccupied with the imminent encroachment of adulthood and all the attendant personal upheavals that come with it. Capsized and re-edited early in its lifespan by an exploitation distributor under the title Miss Jessica Is Pregnant, the original film downplays taboo in favor of stewing in the mix of emotions surrounding Carl (Ted Heimerdinger) and Jessica’s (Larue Hall) hesitant bond. Because of a hazy history regarding their parents’ sex lives, a question lingers as to whether they’re blood relatives in the first place—all the better to magnify the treacherous decision-making processes that accompany one’s eventual flight from the family nest.

Shot on monochrome 35mm using the cast-off camera models at an Athens rental house, and overdubbed in many spots to account for the swarming mid-summer locusts that overwhelmed the original analog audio, Spring Night, Summer Night looks and sounds as delicate as the emotions it puts under a microscope. In spite of its limited means, however, it’s a dexterous directorial achievement for Anderson, a University of Ohio professor whose brief career beyond this assured feature debut comprises only a trio of a shorts and a sophomore effort, America First, about which little information exists online. Anderson’s conscious intention was to impart the ethos of Italian neorealism to the stories of impoverished Appalachia, and here his visual repertoire merges the anthropological instincts of a documentarian and the formalism of an aesthete, with scenes of fly-on-the-wall multicamera coverage mingling alongside carefully blocked long takes shot on bumpy homemade dolly track.

One such shot surveys and crystallizes the tension on the homestead as the embittered family patriarch (John Crawford) chases Jessica through the screen door, around the house, and across the lawn while demanding she reveal the identity of the man who impregnated her. Anderson keeps the camera outside, elevating the landscape to the same level of importance as the action contained within it—a compositional equity that he maintains through much of the film. Ravaged by the industrial boom and the corresponding disintegration of the rural mining economy, the family’s residence of Canaan, Ohio is a single-street ghost town where even the expansive rolling hills and dirt roads hardly offer an escape from the prevailing atmosphere of stale gossip and diminished hope. The dive bar peddling 25-cent Blatz and weekend hootenannies would seem to provide a temporary, boozy respite, but even here the revelry is prone to turn quickly to conflict, as when Carl lashes out at Jessica for dancing with another man. When everyone knows everyone, little can stay repressed.

Still, for all the small-town suffocation so eloquently expressed in Anderson’s filmmaking, the prospect of leaving is no less daunting. Omens of the outside world’s dangers abound throughout Spring Night, Summer Night. Carl runs into an old acquaintance who notes that he needs to keep his busted tractor running to keep it alive, and then we hear it break down off screen. Later, in a bit of roughhousing in the acreage behind their farmhouse, Carl mimes shooting his youngest sibling with an air gun just before running off into the woods with Jessica. There, we see one of Jessica’s slippers trickle down a stream, a symbol of lost innocence imbued with the quality of a fairy tale. It’s telling that Carl’s impulsive and short-lived getaway to Columbus, prompted by a cryptically shot sexual episode with Jessica, occurs entirely off screen (it was apparently filmed and then cut); we’re left only to speculate on the impression it made on him, while remaining fully aware of Canaan’s terrible gravitational pull.

As home life in Spring Night, Summer Night yields one trauma after another, Anderson remains sympathetic to the roots of these issues. Portrayed as an alcoholic and reactionary autocrat through much of the film, Crawford’s father figure is ultimately granted a soft-spoken monologue one afternoon at the bar to expound on the myriad ways his community and country have left him behind—a scene captured in a single creeping camera movement that might have inspired Béla Tarr. None of this, however, is to diminish the suffering of Carl and Jessica’s mother (Marjorie Johnson), who brings a fierce independence to combat the callousness of her husband, even as she laments a brighter past in California. Anderson’s film is about ordinary people driven to extreme behavior by the destitution of their situation, and yet it’s alert to the ways in which escaping this situation is equally extreme and perhaps even foolhardy. It concludes on an arresting image that crystallizes this ambiguity—one that has since become something of an indie cliché but which here takes on a primal power.

Surely the surviving materials from Spring Night, Summer Night’s production couldn’t have been in tip-top shape given its blighted history, but the new 4K restoration by Nicolas Winding Refn’s ByNWR and Cinema Preservation Alliance, courtesy of Flicker Alley, has done a remarkable job in minimizing any hiccups in the viewing experience. It’s true that the audio levels are occasionally uneven, with certain lines barely audible, but one might reasonably credit this to the fidelity of the original recordings, and in any case the dynamics of the soundtrack only enhance the feeling of being granted rare access to something intimate and raw from the backwoods of America. The film’s visual restoration, meanwhile, doesn’t contain any such issues. Though shot in many cases with only available light, there’s never a sense of impenetrable underexposure. Rather, the preservationists have dialed in the contrast and sharpness to an ideal degree, resulting in an image that’s neither overly chiaroscuro nor flat.

For a film that was essentially lost for four decades, the variety of supplemental material provided here is impressive, especially since it’s all of relatively high quality. Most stunning as an archival piece is the hour’s worth of behind-the-scenes footage with commentary by archivist Peter Conheim and writer/producer/editor Franklin Miller, which elucidates enough DIY production quirks to satisfy any aspiring filmmaker. Also noteworthy are the three short films in Anderson’s Bluegrass Trilogy—part-undercranked, part-stop-motion documentary snapshots set to upbeat bluegrass music—that the filmmaker shot at Ohio University: Football As It Is Played Today and Cheers (celebrations of college football and basketball, respectively), and How Swived (something of a hyperspeed, miniaturized Jeanne Dielman).

And there’s much more: an illuminating video essay featuring one the architects of this re-release, filmmaker and historian Ross Lipman, expounding upon the key distinctions between this restored cut and the exploitation version; cleanly recorded coverage of a Q&A at the Cleveland Cinematheque with most of the film’s key contributors, during which Miller confesses to being specifically influenced by the films of Ermanno Olmi; a comparison between shooting locations then and now, which offers an interesting study of the evolution of rural America; a slideshow gallery with solid production photos; and a booklet of five essays tackling the film from critical, historical, and preservationist angles. It’s a full education.

Flicker Alley’s disc offers everything one could want out of a home video release: indispensable curation, sterling presentation, and a wealth of supplements to expand our understanding of an overlooked piece of cinematic art.